I’m extremely excited that Drawn to Comics gets to be the place where Cathy G. Johnson’s newest book, No Dogs Allowed, is officially announced! Johnson has consistently been making some of the most beautiful and affecting comics, especially when it comes to comics that explore identity, gender and sexuality (if you haven’t seen her comics Dear Amanda and Jeremiah, I suggest you go and do that right now). This new book, which sounds and looks right up Drawn to Comics’ alley, tells the story of a remedial girls soccer team filled with misfit kids who grow and change and learn about friendship as they learn about teamwork. 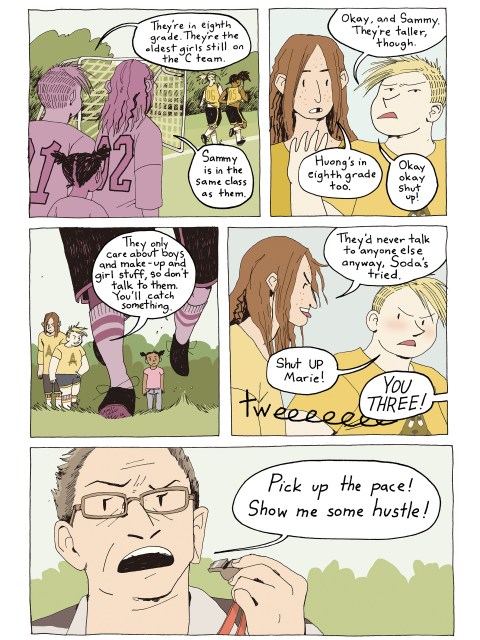 Dear Amanda, a comic about two queer women who begin a relationship and have to learn how to navigate gender and identity, was the first comic by Johnson that I came across. It instantly made me a fan, and I’m far from the only one. Johnson, who lives in Providence, Rhode Island and also works as a teacher, received the 2014 Ignatz Award for Promising New Talent from the Small Press Expo and that same year was shortlisted for the Cartoonist Studio Prize from The Slate Book Review and the Center for Cartoon Studies.

Knowing Johnson’s previous work, her talent, and the description of No Dogs Allowed, I couldn’t wait to talk to her about it and help spread the news about this upcoming book, which will be published by First Second Books in 2017. 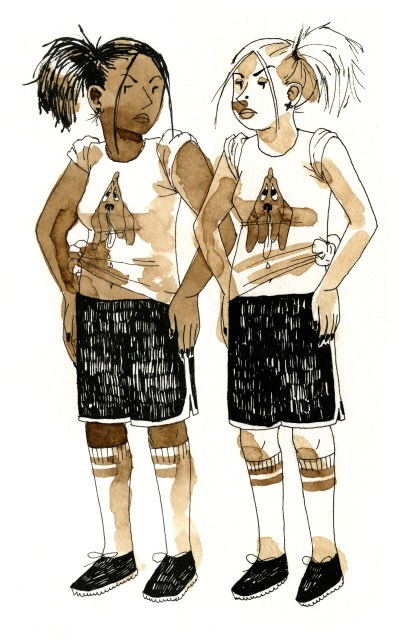 I’m really excited about this book, can you tell me about what inspired it?

The inspiration to create No Dogs Allowed came from my students. I had recently moved to Rhode Island and had a job as a Girl Scouts Troop Leader at a variety of schools and community centers around the state. I got to know over 100 girls at that job, and I became overwhelmed with the need to create something for them. Girls are so amazing and passionate! I got to learn their loves, their concerns, their fears, important aspects of their lives… and I wanted to create a book that reflected that. I wanted to make a book for them.

I also used aspects of my own childhood to weave into No Dogs Allowed— specifically the framework of a middle school soccer team that was really, really terrible. In sixth grade I was forced onto a soccer team that didn’t win a single game. It was a mortifying experience, especially during puberty— the feeling that you are always losing. It’s a hard experience to go through as a kid, yet we ask so many kids to do it. I wanted to make a book about that experience.

So, we know that No Dogs Allowed focuses on a misfit team of soccer-playing middle school girls; can you tell me a little about the characters that we’ll meet?

No Dogs Allowed centers on the illustrious middle school soccer team The Bloodhounds. Armed with nothing but wit, The Bloodhounds are a team of eleven awesome kids who really wish they were doing something else.
Our heroine is Faith Dolo, brand new 5th grader just starting middle school. She’s observational, non-judgmental, and highly imaginative. Faith has a rich inner fantasy world that comes out in the story. Then there’s Sodacan, a tough rebellious 7th grader who sings and plays guitar in the coolest basement punk band The Creepers. Sodacan prides herself for being in soccer for two whole years and never touching a soccer ball, not even once. Nadia Meer is a talented 7th grader who reluctantly gets transferred to The Bloodhounds from a better team. Nadia is pretty mad that the rest of the team is dragging her down. Bulldog and Warthog are two high femme outcasts who really don’t care what other people think. The rude nicknames were invented by their teammates who feel excluded by the older judgmental teens, when it’s really Bulldog and Warthog who are ostracized. 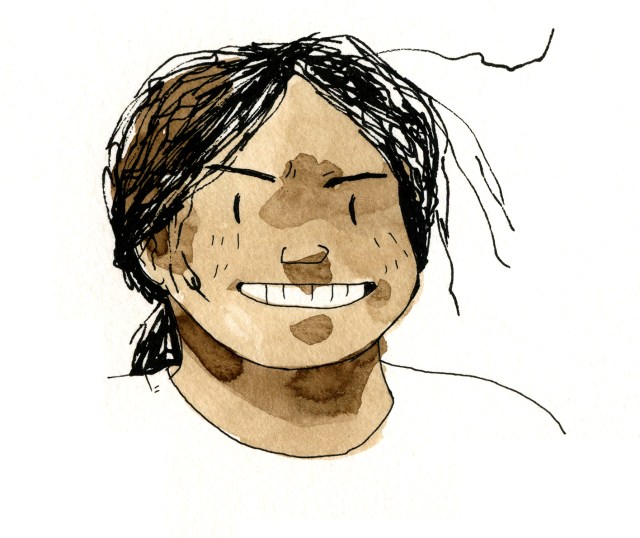 A lot of your comics not only feature LGBTQ characters, but explore those parts of their identities, and how being gay or trans or queer colors the way others interact with you. Are we going to see any of that in this book?

This book is about childhood and girlhood, and there are many ways of experiencing that, including being gay and trans. No Dogs Allowed has gay, straight, cis, trans, femme and butch kids in it — kids who are only just figuring out who they are and what they want in life. I especially wanted to depict every experience in a positive light, because it is normal and good to be whoever you are. Growing up is hard, and it’s even harder when everyone around you is trying to shove you into the same, boring old box. 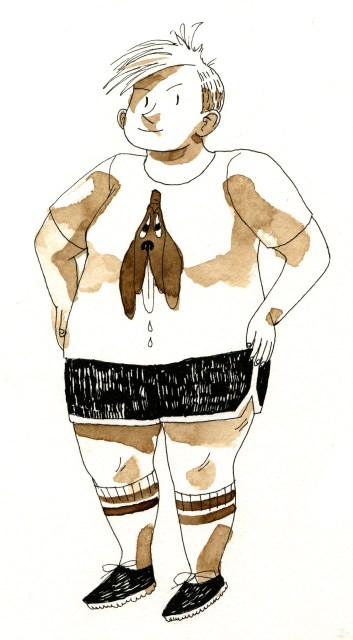 How much of yourself is in these girls? Would your younger self have fit on this team?

I’d say 50% of No Dogs Allowed is inspired by my students, and 50% is my own experience. School is a wild time when you are forced to be with people you wouldn’t necessarily choose to hang out with. There are kids of every personality and interest in schools. My younger self would have been on this team, but that’s because everyone’s younger self would fit into The Bloodhounds!

I really love your art style. There’s something about it that really draws out the essence of your characters and world. Can you tell me a little about your art style and the kind of feelings you’re trying to convey with it?

My art style is based around the love of people. Drawing styles unfortunately have the possibility of being whitewashing and exclusionary. Animation is a perfect example of this: if a person isn’t cis, skinny and white, their appearance can come off like a caricature. I wanted to create a drawing style where everyone is visible, looks awesome, and looks like they belong in the world. The way real life is! I also want my characters to look like they own themselves. They each make their own decisions on what to wear, how to put up their hair, and put on make-up. Just because they are in the same book doesn’t mean they are all going to have the same fashion sense!
The final art for No Dogs Allowed is going to be digitally colored by the wonderful Kevin Czapiewski. Kevin’s colors are bright and beautiful, and have just the right balance of realism and fantasy. I’m so lucky to be collaborating with him to make this book come to life. 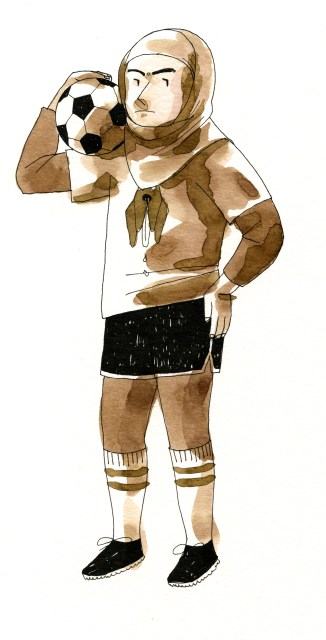 What’s your target audience with this book? Is it just for middle schoolers, or will everyone enjoy it?

The book is about middle schoolers, but I hope elementary, high schoolers and adults also get a kick out of it! There is something for everyone in it. I work under the philosophy that kids are smart as whips and don’t need stories dumbed down for them.

What do you hope readers will get out of this book?

I hope readers see themselves in this book. I hope they see their friends, their parents, and their community members. And I hope it’s a lot of fun to read about The Bloodhounds, the worst soccer team in middle school! 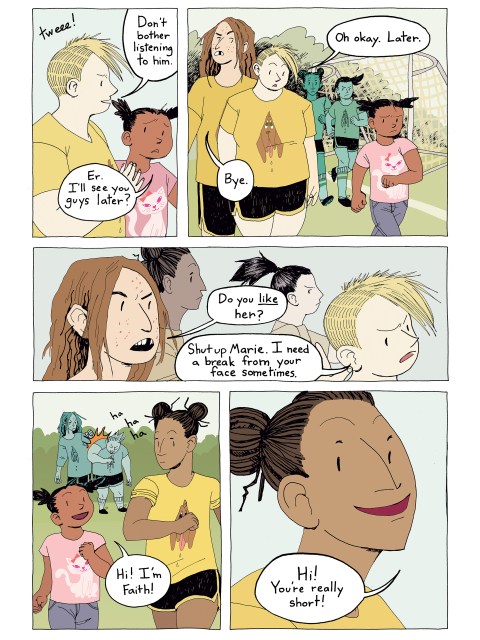 In other awesome news about upcoming comics that I’m sure you’ll all totally love and want to buy, Melanie Gillman (the creator of one of my all-time favorite webcomics, As The Crow Flies) and Kori Michele Handwerker (who’s had work featured in a bunch of anthologies I’ve written about, including Beyond, Love in All Forms and Chainmail Bikini) are teaming up to edit a brand new anthology of queer paranormal romance comics called The Other Side. Now, I love queer things, I love paranormal stuff, I love romance and of course I love comics, so The Other Side is kind of a perfect storm for me, and I hope it is for you too. 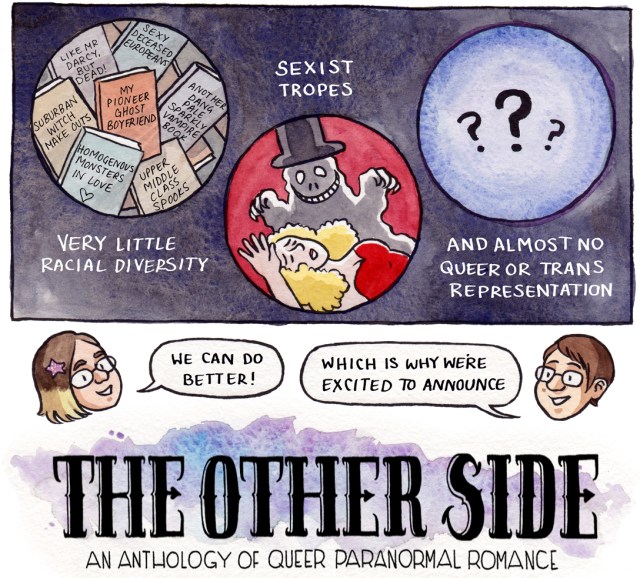 According to the anthology’s website, “The Other Side is a black and white comic anthology debuting in the spring of 2016… Stories in The Other Side will be everything from spooky to funny, sweet to melancholy, but all of them will be about queer paranormal romance! The goal of the anthology is to showcase stories that explore love, spectres, and underrepresented identities.” Currently, comic creators including Mari Costa (who has a lot of comics I’m a big fan of), Star Trip creator Gisele Jobateh, Drawn to Comics regular Sfé R. Monster, Aatmaja Pandya (who I’m embarrassed to say I only found out about right now, but is absolutely amazing) and both editors are already contributing the book, and Agents of the Realm creator Mildred Louis will be doing the cover, so it’s already seeming pretty amazing. 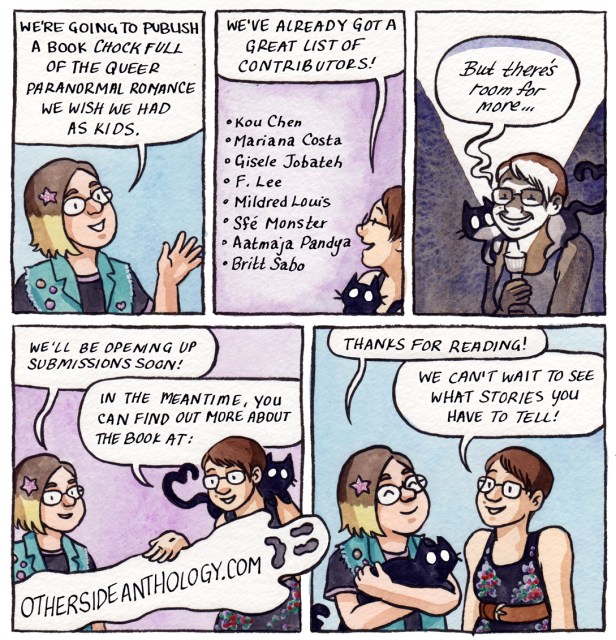 This book is currently accepting submissions for comics to be included and will be until May 31. Creative Teams will be paid $50 per page for accepted stories, plus a kickstarter bonus if the book exceeds its fundraising goal. You can learn more about how to submit and what exactly they’re looking for by checking out their website.