Both Marvel and DC are about to go hardcore into Special Event mode, meaning that not only will they both try to convince everyone to buy a bunch of “crossover” comics that they would normally have no interest in and once again confusingly shift around their histories, continuities and universes, but they’ll also be introducing some new titles that seem genuinely fresh, new and interesting.

Marvel is launching an all-new Secret Wars event this summer that will take the Marvel Multiverse apart and rebuild it again. This rebuilt, patchwork world of Marvel universes is called Battle World and will introduce us to a whole new set of takes on some of our favorite Marvel stories. 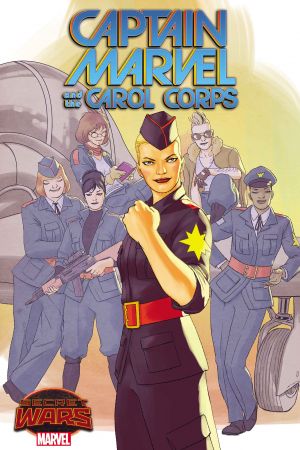 1. Captain Marvel and the Carol Corps

Fans of Captain Marvel are probably familiar with the name The Carol Corps; that is after all what the devoted fanbase of the series, and of writer Kelly Sue DeConnick, are called. This series, being co-written by DeConnick and Kelly Thompson (of the upcoming Jem and the Holograms) with art by David Lopez, features a different version of Carol Danvers than we’re used to. She still has superpowers and still essentially the same person, but since her world is different, the way she interacts with that world is different. Oh yeah, and she’s leading a kickass fighter pilot squadron of fellow women. Some of these are familiar faces; they’re brought over from the Banshee Squadron from an earlier Captain Marvel story. Others are new, making the team more diverse. Everyone can probably guess this about me, but I cannot wait for this series. This is like a dream come true. 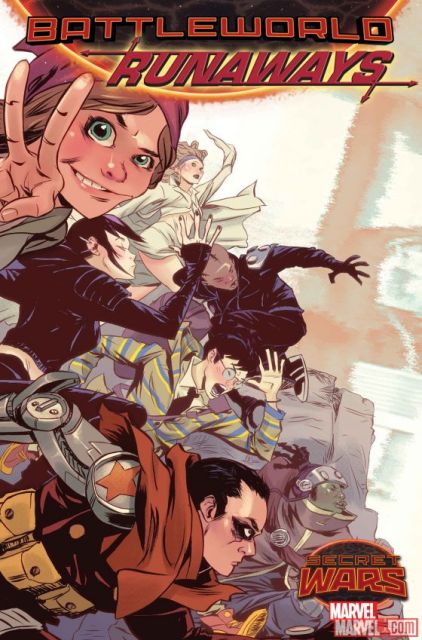 The original Runaways series is one of my all-time favorites, and so when I heard that the team was being rebooted, I immediately was in. Then I learned it was going to be written by Noelle Stevenson, the person behind Nimona and co-writer of Lumberjanes. How could I not be dying to read this series? Stevenson, and artist Sanford Greene, will be taking the team in a new direction, keeping the concept of the book and original Runaway Molly Hayes (aka Princess Powerful) and adding Jubilee, Amadeus Cho, Skaar, Cloak and Dagger (who did previously appear in the original Runaways title), a teenage Bucky and a new character named Sanna Strand. Stevenson also said there would be some other, unannounced characters appearing. Stevenson is a great writer, Runaways has a great concept and these are some great characters (Jubilee, Cloak and Dagger, Molly Hayes, yes please). 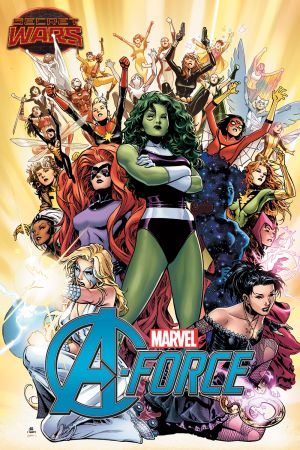 Marvel thinks that this upcoming ongoing title is so exciting that they went on The View to announce it. It’s being written by Ms. Marvel writer G. Willow Wilson and everything-but-the-kitchen-sink writer Marguerite Bennett and illustrated by Jorge Molina. I totally understand why. It’s an all new Avengers team led by the likes of She-Hulk and Medusa (teaming up for the first time since Matt Fraction and Mike Allred’s wonderful FF), Dazzler and the former Runaway, Nico Minoru. I don’t know about y’all, but I know that whenever I see anything about the Avengers, I definitely think that the team could use about a dozen more women, and that’s exactly what this title is doing. There’s also going to be a new character named Singularity, who Wilson says is “not a flesh and blood human being, but a comsological event that gains self-consciousness” and that “she doesn’t have a natal gender. She isn’t “born.” She doesn’t age. She learns about all these things from us — the human race.” This all seems so dang cool. 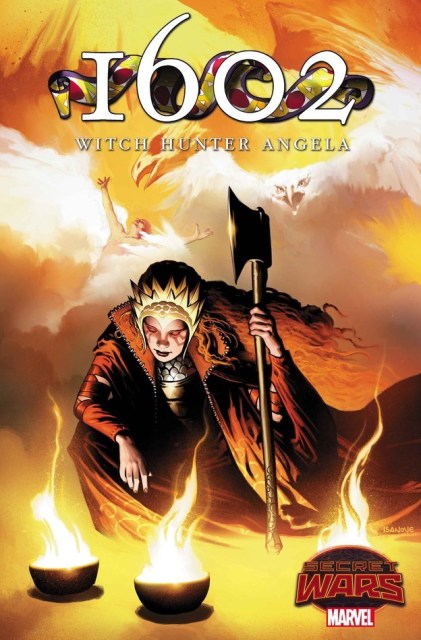 Just last month I wrote about how great Kieron Gillen and the previously mentioned Marguerite Bennett‘s Angela: Asgard’s Assassin is and how great it is that it co-stars Sera, a trans woman of color. Well, just yesterday, Marvel announced a new Angela and Sera starring Alternative Universe title as a part of Secret Wars! This title, 1602: Witch Hunter Angela takes place in the 1602 universe originally created by Neil Gaiman and Andy Kubert which, as the title suggests, takes place in the early 1600s, mainly in Europe and the newly founded American Colonies. Witch Hunter Angela, which will have its main story illustrated by Angela: Asgard’s Assassin secondary artist Stephanie Hans, will follow Angela and Sera on a “wandering holy mission” hunting down mutants, called “witchbreed” in this universe. I’m ridiculously excited to see how Gillen and Bennett bring Sera, a trans woman, into a world like this, and based on what she tweeted when the book was being announced, I’m pretty sure Bennett (and probably the rest of the team) is too.

As for DC, this April they’ll be launching their month-long crossover event Convergence, which is poised to bring together the pre-New 52 multiverses with the current New 52. Once all of that is over, DC has said that they’re actively seeking to reach a more diverse audience with their relaunched and new titles in June. 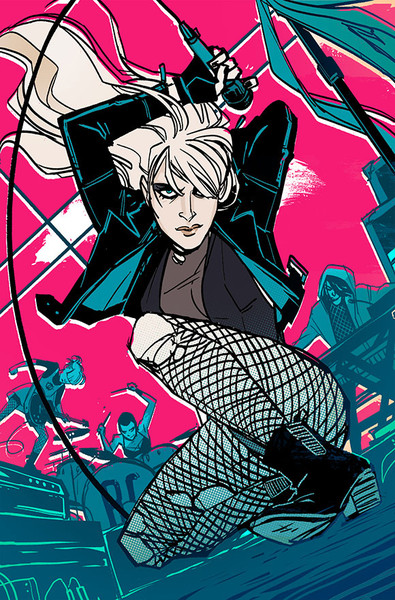 Ever since I was a little kid, Black Canary has been one of my absolute favorite heroes. She rides a motorcycle, she’s not based on a male superhero, even though she has superpowers she’s also one of the best brawlers in the JLA, and she’s got that sick leather jacket. She’s been showing up recently in the current run of Batgirl, and most recently was shown practicing with her rock band. Her brand new solo title will follow her adventures as the fishnet-wearing and butt-kicking frontwoman of another band. The book will written by Batgirl and Gotham Academy’s Brenden Fletcher and feature art by Annie Wu. Fletcher has shown that he really knows how to write awesome and kickass ladies and Wu’s work on Hawkeye was just damn cool. I mean, Fletcher’s initial one-line pitch for the book was “it’s a Kung-fu rock and roll road trip,” so how can I say no? 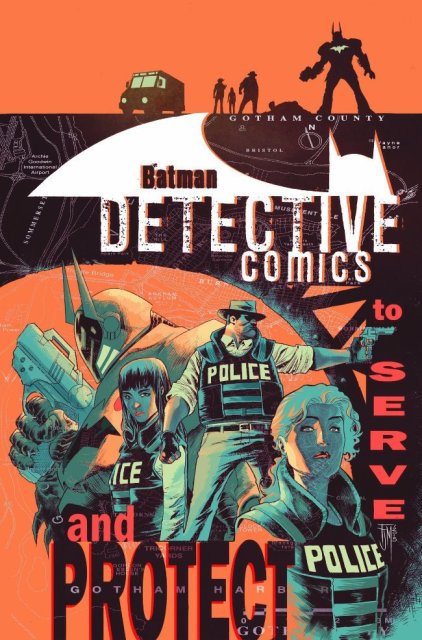 Yes, Renee Montoya is finally coming back as a regular character in DC Comics! It’s been far too long since everyone’s favorite lesbian Latina detective has played a major role in DC comics. While this isn’t exactly a “new” title, it is being relaunched after Convergence ends. The new Detective Comics seems to be similar to the classically wonderful Gotham Central comics (which is definitely a good thing), focusing on members of the GCPD and how they deal with the supervillains of Gotham City.

Following the events of “Endgame,” get ready to ride with the GCPD in a whole new city! Harvey Bullock is leading a Bat task force, but what are his duties, and can he be trusted? And what kind of welcome awaits his new partner, Renee Montoya?

Basically, as soon as I heard Renee Montoya would be there, I was in. Plus, what’s up with that giant Batman robo-suit thing? I can’t wait to find out.

Art by Matt Cummings via The Mary Sue

While Boom! Studios may not be having a huge crossover event, they’re still launching new titles, and the one I’m most excited for Kate Leth and Matt Cumming’s Power Up! The way Leth explained it to The Mary Sue, this comic seems like it’s going to be a fun and weird take-off on classic Magical Girl stories.

Power Up is the story of three people and one goldfish who find themselves unexpectedly bestowed in a blinding flash with incredible, superheroic powers. Having no guidance, no mysterious watcher or ancient text to tell them what it all means or how to use their new abilities, the unlikely team is drawn together and forced to figure it out in a hurry as mysterious forces begin to attack.

Our series deals with the notion of Chosen Ones being chosen… wrong. It’s a magical team story, an exploration of what happens when a group of people (and a goldfish) have given up on themselves, but are called to something higher. How do superpowers affect day-to-day life? How do you make a costume when you can’t sew? What do you tell your boss when you have to leave work early to fight aliens?

Also, to assuage any fears that the book might make Kevin, that bearded character in a skirt up there, into a joke, Leth told me on twitter that we shouldn’t worry. She said that she’s “not the type to make fun of guys in dress! Or rad magical costumes” and that the comic will address Kevin’s costume and his feelings about it directly.

Do you remember back in 2013 when I asked you all to get excited about the upcoming Queer Sci-Fi/Fantasy comic anthology Beyond? Well, all of the submissions are in and they’ve officially launched their Kickstarter campaign! This book features Drawn to Comics favorites like Sfé Monster of “Eth’s Skin” and “Kyle & Atticus,” Blue Delliquanti of “O Human Star,” Leia Weathington of “Bold Riley” and A. Stiffler and K. Copeland of “Chaos Life” as well as many others. So, if you’d like to see some great queer sci-fi and fantasy, head over and donate what you can!