Leia Weathington is the writer of the comic series The Legend of Bold Riley, and the stories that she has written are simply put, full of might and magic. It tells the story of the princess of a fictional kingdom who becomes restless and yearns so strongly for excitement beyond the borders of her home that, with her father’s blessing, she goes off seeking adventure. Princess Rilavashana SanParite (also called Bold Riley) takes her sword and her horse and goes off searching for glory. These genuinely seem like retellings of stories that have been passed down through the generations. Except that they star a queer woman of color, and because of that they’re the kind of tales that I would want to tell my children at night. 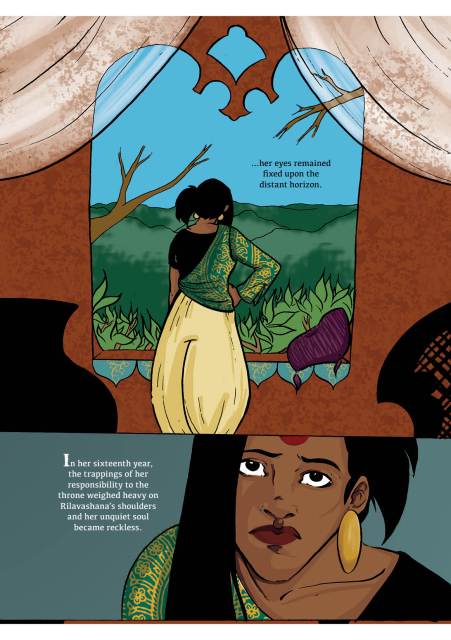 Riley is an awesome hero. She is skilled with a sword and great on horseback. She is clever and wise. She is kind and compassionate. She fits in the pantheon of heroes right alongside Beowulf, Gilgamesh and Odysseus. Plus, she’s a queer woman of color. This is everything the folklore geek that I am could have ever asked for. 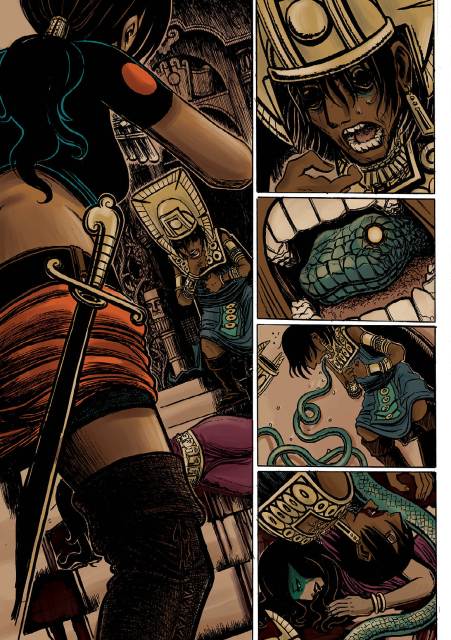 The chapter with possibly my favorite art (by Jason Thompson and with colors by Vanessa Gillings), and one of my favorite stories is “The Serpents in the Belly,” which you can read a black and white version of online. This one really adheres to all the old rules of folklore and fairy tales. It fits right in with tales like Momotaro or El Principe Oso. It tells of how Riley used her wits, knowledge and skills with a sword to defeat an evil snake-creature and help the women that she meets on her journeys.

“The Wicked Temple,” another chapter you can read the pre-colored version online, is another favorite. The art, by Konstantin Pogorelov, is beautiful with its ink rain and gorgeous temples and demons. This one also has wonderful mythology. It has storm gods that come in the form of birds; evil, devouring demons that come in the form of beautiful statues of women; hidden crumbling temples and enemies that must be defeated using means other than the sword.

Another highlight is the story “The Golden Trumpet Tree,” wherein our hero finally finds peace and love with a beautiful maiden and steward of a forest. Breaking not only the tradition of having almost exclusively male heroes in folkore and legend, Bold Riley also has a queer hero, and we get to see that here. However, not everything is perfect in paradise, and Riley’s heart is soon broken. The art in this story is beautiful, but it is softer and rounder than in the previous stories. However, this isn’t a bad thing, as it fits with the story of magical love. Just as Riley is become soft and more peaceful and calm, the art is following suit. 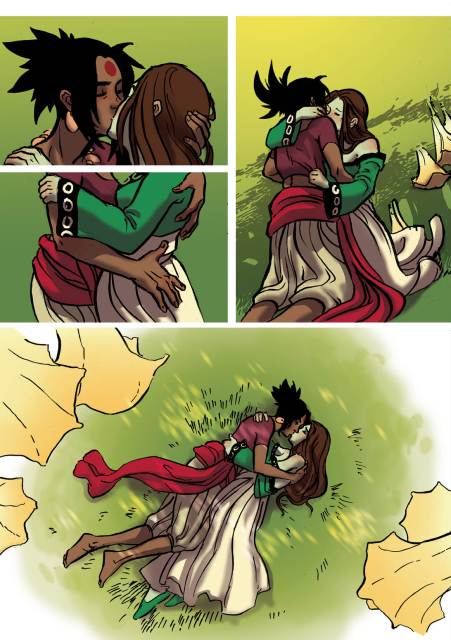 This book contains art by the aforementioned Thompson, Gillings and Pogorelov, along with Marco Aidala and Kelly McClellan. Weathington herself provides the art for the prologue. By having all of these different artists, the stories really seem to be a collection of tales that came from different sources, as if Weathington had simply gathered together Bold Riley’s legends and is presenting these ancient tales to us.

The Legend of Bold Riley was published by the LGBT comics company Northwest Press and you can purchase both physical or digital copies of the book from them, or you can get a physical copy from Amazon. As a warning, several of these tales are R-rated, whether for sex or for violence and gore. Weathington is currently holding a Kickstarter campaign to publish a second volume, which has prizes that include the first Bold Riley book, the upcoming second book and signed art. She lives in Portland, where she moved from San Francisco and also has a podcast and a blog.