I picked up the first issue of Angela: Asgard’s Assassin because it was a book about a kickass lady warrior co-written by Keiron Gillen, the writer of Young Avengers and The Wicked + The Divine, two of my all-time favorite comics. I picked up the second and third issues because it had fun writing, tons of action, cool mythology and enjoyable art. I’m going to keep reading the series for all of those reasons, plus the fact that in issue #3, we learn that Angela’s partner-in-crime, best friend and perhaps something more, Sera, is also a trans woman of color. 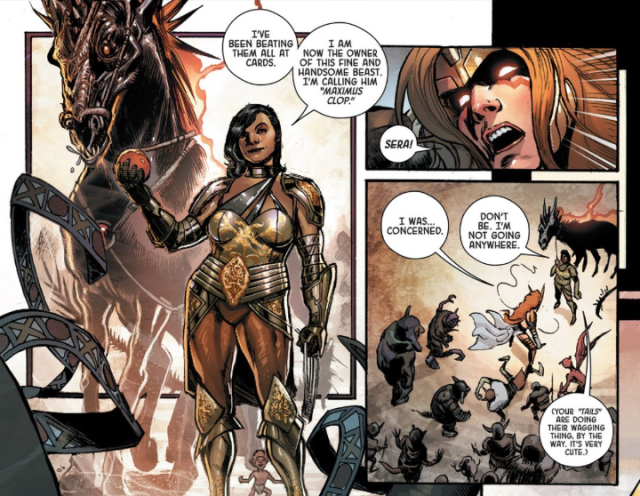 Recently, we’ve finally started seeing the introduction of several trans characters into the world of comics. Of course, Image Comics (which I wrote about a couple weeks ago) has a bunch of trans characters in its current books. DC Comics also became major players in the representation game when they had Alysia Yeoh come out to her roommate and friend Barbara Gordon (Batgirl) as trans, making her the most mainstream trans character in the history of comics. Marvel made a less high-profile move when Tong, a young Moloid (an race of underground humanoids) who was a part of a sort of mentorship program run by Ant Man, She-Hulk, Medusa and Ms. Thing called The Future Foundation, came out as a trans girl in the book FF. However, both Alysia and Tong came out in the spring of 2013, and neither DC nor Marvel really did much to introduce more trans characters. 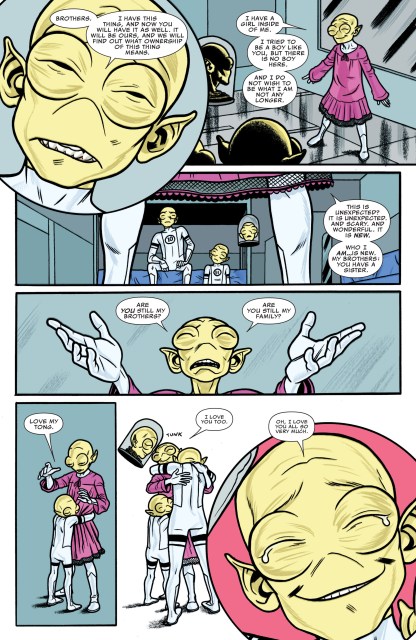 From FF #6 art by Mike Allred

While these were huge steps forward, and very welcome and appreciated steps, many fans (including myself) were still holding out hope for a trans superhero. Well, Sera is pretty dang close. She has superpowers (she’s a pretty good warrior and a great magician and has enhanced endurance and strength and all of that), she wears a weird outfit and she fights bad guys. Although she doesn’t have a secret identity and isn’t an Avenger or member of the X-Men or anything, she’s pretty much as much of a superhero as a character like Lady Sif from the Thor comics and movies.

So, a little background on the book. Angela is the daughter of Odin and Freyja, but was kidnapped and raised as an Angel from Heven (which is a realm like Asgard or Midgard) to be a super powerful warrior with a strict code of balancing debts and a harsh hatred for all things Asgardian. Now that she knows who she is, she’s kidnapped the new infant daughter of Odin and Freyja and she’s on the run from Odinson (the former Thor), Lady Sif and the Warriors Three with her friend Sera in tow. So far the comic has mostly been Angela and Sera getting into fights and a bunch of history and lore thrown in, which makes for a pretty great fantasy comic. 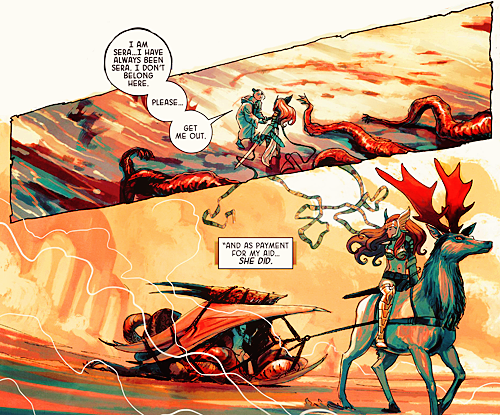 Each issue also has a section where Sera tells a story about her and/or Angela’s past to someone in the comic, thereby letting the reader know more and more about their pasts. This is a really cool technique where Gillen teams up with Marguerite Bennett to write the stories and artist Stephanie Hans steps in to really make it feel like a bard or story-teller is reciting the legends of her people. It’s pretty awesome you guys. In the latest issue, Sera is trying to convince Star Lord of the Guardians of the Galaxy to help her and Angela, and she does so by telling the story of how the two met and became friends. A part of this story is that Sera grew up as an Anchorite, which is the group of male Angels. She says that she was “never their kind” and when she saw Angela fighting, she helped her, joined her on her adventures, eventually “found a way to make [her] [her]self” and the two became inseparable. The book also makes it pretty clear that Sera’s queer, especially for Angela, and that perhaps Angela returns those feelings.

Gillen and Bennett handle this really, really well, and make Sera into a really cool and interesting and likable character who is a trans woman of color, but is also a ton of other things. They also found a really good way to tell Sera’s story without sensationalizing it or misgendering her or disrespecting her at all. So, pretty much I loved this issue. I was already a big fan of this book and now I’m an even bigger fan. Also, like I said on twitter, Sera is the second openly trans woman character that Gillen is currently writing, which means he has more trans characters in his books than a lot of publishers have in their entire universes. 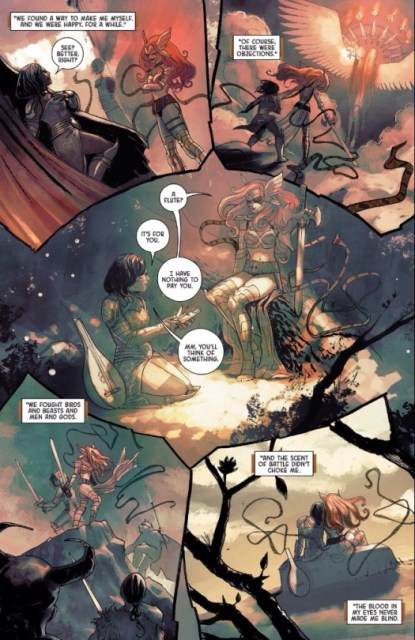 If you like the Thor books or movies at all, or you like things like Red Sonja or any kind of fantasy comics, you’ll probably love Angela: Asgard’s Assassin. You’ll especially love it if you’re looking for more books with trans and queer women characters. I just want to say a huge thank you to Gillen, Bennet, Hans and main story artist Phil Jimenz for making Sera and for making her so great. I know I’m a nerd, but I really love comic books and my heart yearns for positive representation like this. So when I read Angela: Asgard’s Assassin #3 and found out that Sera is a trans woman of color just like me, it made my entire week. Sera is powerful, she’s funny, she’s clever, she’s loyal and most importantly, she’s a hero.