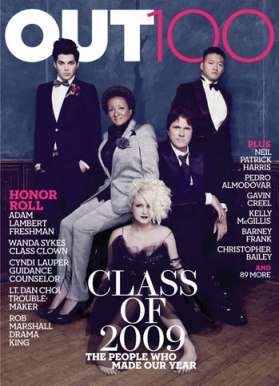 There’s been a bit of controversy this week about your alleged reluctance to appear on the cover of Out magazine’s annual Out 100 issue. OUT claims, “it’s only because this cover is a group shot that includes a straight woman that your team would allow you [Adam] to be photographed at all,” and you say/tweet, “Chill! It’s not that deep!” which oddly is what I always say when I’m stoned & eating a gigantic sandwich and my girlfriend wants to play with an ambitiously aerodynamic baby’s-arm-sized dildo. But enough of the penis talk, that’s what got us into this mess to begin with.

So, what do we think of this controversy? Well, we do LOVE the cover, that’s for sure! (We subscribe to OUT, obvs, b/c it’s been our favorite magazine since ElleGirl folded in 2006.) You & Wanda Sykes would make a dapper butch Alabama Prom couple in your fancy suits and giant faux-corsages! We love Dan Choi doing the Jordan Catalano lean in the background, we’re ready to cozy on up to Cyndi Lauper’s socks-free floor-squat and that other white guy sitting there looks very normal and kind, whoever he is. Your interview was delightful.

So, cover art aside … we can’t really figure out what’s going on here or decide which side to take. The Team is divided. And well Adam, you know gay men with their drama and their anger and feelings, it’s just so difficult to decipher all that processing they always do! Does it make us cringe a little to hear you refer to OUT as having an unsavory “agenda” in your reaction tweet? Kinda. But we’re gonna give you the benefit of the doubt here because our love for you is that pure and because we’re trying to kiss your ass here, because that’s what lesbians do to asses. We kiss them and watch them grow and put jeans on them, and where was I? Oh yes! 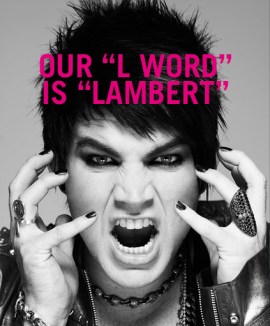 Enough drama boys, let the lezzies handle this one!

That’s right, we think we can offer you a chance to make amends with The Gay Men via the deep, chilled lesbionic wombs of Autostraddle.com and your passionate lesbian following. Adam, you might not be aware of this, but Autostraddle is Adam Lambert Lesbian Fan Headquarters and so far we haven’t been able to get our hands on an advance copy of your album (although we’ve already advance ordered the collectors edition copy ourselves) [or at least Alex did] or been able to schedule an interview or a photoshoot with you! Wouldn’t you like to join the roster of stars who’ve done photoshoots with our esteemed photoblogger Robin Roemer and been interviewed by our dynamic interviewing team?

Perhaps you, like most of the world, haven’t heard of Autostraddle.com, but you might be surprised to know that our TV Editor Carly’s Mom LOVES the website, we’re besties with your cover co-stars Dan Choi and Cyndi Lauper and that we are finalists in the Mashable Open Web Awards! I know! Little ol’ us!

Adam, our love for you has been as steady & unwavering as a lesbian cruise rolling up to the sandy shores of Cozumel. Let’s take a trip down Memory Lane:

+ We did our very first Autostraddle Roundtable on the topic of Adam Lambert – First Gay American Idol?
+ We were the first to declare your “For Your Entertainment” album cover the most “terrible/awesome thing ever”.
+ We were devastated when you lost American Idol though we predicted you’ll win a NewNowNext Award next year, and probs also a Nobel.
+ We expressed excitement over your Rolling Stone cover (we purchased several copies the day of), your Entertainment Weekly Idolator interview, and really just everything you’ve ever done ever, including your (ex) boyfriend. You’re second only to Lady Gaga, Lindsay Lohan and Same-Sex Marriage in our most popular tags of all time.

However, if that isn’t enough for you, we would like to share a photograph from Halloween 2009, in which our Editor-in-Chief Riese and Design Director Alex Vega dressed as Lady Gaga & Adam Lambert, pop duo extraordinaire of life: 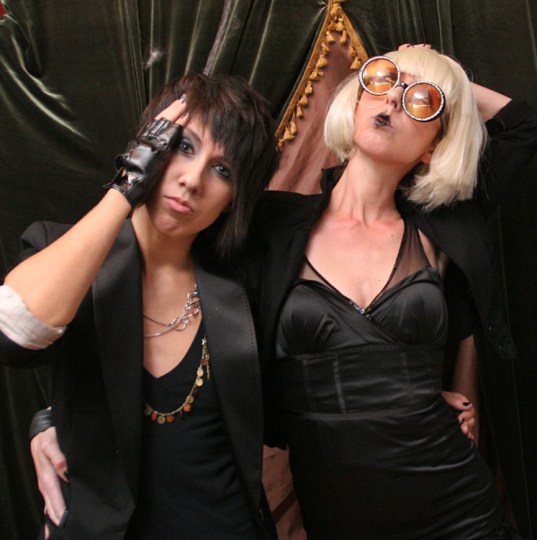 P.S. Katy Perry was on the cover for the Out 100 last year, ladies. Katy Fucking Perry. Just saying.

P.P.S. WE LOVE YOU WANDA SYKES