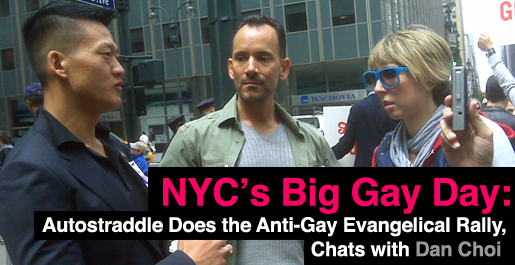 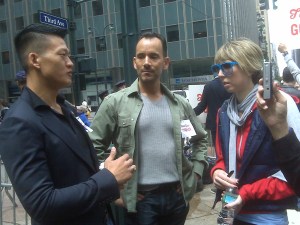 Initially we’d thought today’s Anti-Gay Evangelical Protest, scheduled to shout nonsense towards New York Governor David Patterson’s office at 2 PM on Sunday May 17th, was spearheaded by NOM (the National Organization for Marriage). We’d initially learned of said rally — billed as a “Marriage Convocation” — on the NOM website (which I suggest you never visit, unless you have a fork handy and your girlfriend thinks it’s sexy when your eyes bleed) on April 24th and promptly decided to attend, because we are genuinely curious as to WTF is wrong with these people.

Some time between April 24th and May 13th, that story changed. On May 13th, it was announced that in direct response to Patterson’s gay marriage bill passing on May 12th, Hispanic pastors in New York were mobilizing for a May 17th protest to let Patterson know that “this is not a political issue. It’s a G-d issue, and we can’t stay in our pews praying.” Regardless of whom, why or wherefore; the rally was still featured on the NOM website and we figured we’d go check it out. If there is a storm gathering, we would like to be there with the white knights/horsemen and so forth, I hear the apocalypse is a totally crazy laser-light show!!

Recap of the event follows — but first — Here’s our video, edited by Carlytron!

New York state senator and Pentecostal Pastor Rubèn Diaz (Democrat) led the event which bussed in thousands of people from surrounding areas in New York and New Jersey. These supporters were organized via Radio Vision Cristiana International, the New York Hispanic Clergy Organization, the CONLICO network of bishops and the National Hispanic Christian Leadership Conference. (Read Pam Spaulding’s take on the Democrats’ unwillingness to challenge Diaz on his bigoted views.)

Rising Star Haviland, DJ Carlytron, our new BFF Brookling and I set out relatively on time to go meet NOMNOMNOM. First we passed a teeny-tiny counter-protest starting at 43rd street where we first recognized Dan Choi, who was there with his boyfriend Matthew Kinsey. Coincidentally I’d decided last night (while reading his letter to Obama on CNN: “Don’t Fire Me!“) that Dan Choi was my favorite gay of the year, though we’d been fans since catching him on Rachel Maddow the first time and so we fangirled out — “We saw you on Maddow!!” and he was like, “You watch Maddow?” and we were like, “look at us, clearly we are the Rachel Maddow target audience.”

As protesters walked by the group chanting, waving bibles and holding signs (“Adam & Eve not Adam & Steve,” etc.), Dan shook everyone’s hand, enthusiastically affirming that Jesus loved them. Brookling snatched a copy of the Ten Commandments in Spanish from a passerby, then decided that she already knew the Ten Commandments and threw it away.  (Sidenote: last time I checked, the ten commandments didn’t mention the gays. HOWEVER, “do not use the Lord’s name in vain”? That’s right up in there.) Unfortunately it was laminated so we were unable to turn it into our own sign.

Farther down the masses had gathered. Insanely loud music played and people told us that G-d loved the sinner but hated the sin, which is actually not true. G-d loves love, weirdos! We attempted to speak to about ten people who said they didn’t speak English and then when Brookling busted out the Spanish, redirected us to a fenced-off press area, where, sans press passes, we snuck in claiming we were doing a school project about “both sides of the issue” for our sociology class.

We spoke to Rev. Daniel Delgado, the NHCLC Regional Director from the Third Day Church in Staten Island, and Bishop Kittim Silva of the International Council of Pentecostal Churches of Jesus Christ from the Iglesia Pentecostal de Jesucristo in Queens. Both men said they supported civil unions and acted totally befuddled as to why their people were marching around with signs that seemed to suggest a less tolerant attitude. HOW WEIRD!!!

I was surprised they didn’t just start talking crazy and felt about 25% placated by their seemingly tolerant stance talking points. However I was extremely confused as to why Diaz has shifted his attention from more pressing issues affecting this community, such as Immigration reform, public education and health care, towards something that neither man we interviewed could reasonably explain affected them at all in any tangible way.

In other news, during our interview with Silva, five large men gradually encircled us, took our pictures, attempted to cut the interview off and then asked for our names to be written down “for safety,” Brookling obvs gave them fake names. We do look very dangerous, so I get it. It’s the sunglasses. I wear very large sunglasses.

As reported by The Gay City News:

Like many speakers at the nearly three-hour rally, [Rev. Miguel] Rivera [of the National Coalition of Latino Ministers] spoke in Spanish and a translator gave a spirited rendering of the reverend’s already spirited speech punctuating each “out” in Spanish with another in English.
The translator acted more like a chorus for many of the speakers often making the rally sound more like a revival meeting than a political event.
Indeed, the rally opened and closed with a prayer. Participants arrived, some coming directly from church, and left holding their Bibles in the air. They listened to religious music prior to the start of the speeches and prayed or sang.

Then we went back to home base with the gays, chatted with our gays about how excited we were for the Broadway Impact rally ’cause it’d feature singing and dancing (even though we knew we’d probs not go, ’cause we’d be at home editing our video) and then talked to Dan and his adorable boyfriend.  I may have thought a few times of Tasha & Alice, because I have chapstick for brains.

As you can see in the video, Dan Choi radiates honor and goodness, he is a good good man. His optimism was inspiring and his message is honest, beautiful, and incredibly compelling. Haviland told him and his boyfriend what a cute couple they were so they gave us a little homosexual conduct, which was awesome.

I have transcribed all three of our interviews in their entirety!