Interview #2 with Bishop Kittim Silva of the International Council of Pentecostal Churches of Jesus Christ.

Brooke: We’re doing a school project, would you mind answering some questions?

Kittim Silva: Sure, my name is Kittim Silva [something else we can’t hear]

Brooke: We’re looking at both sides of the [same-sex marriage] issue, so can you tell me what the issue is here? 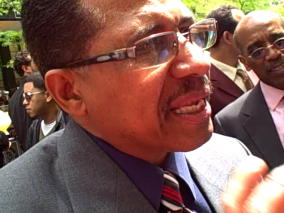 Brooke: And the people who are in the protest, where are most of these people coming from?

Riese: I noticed there’s a lot of signs that say things like ‘Soddom and Gommorah’, these very negative things —

Kittim: No, you don’t see those signs here, we are not a protest against gays. We are protesting against our governor, David Patterson, what he’s endorsing and promoting, and he’s endorsing the marriage between man & man and woman & woman. And we respect the rights of gay people but we are against that marriage. We are here to say that we don’t have to redefine marriage, because it’s already been defined in the history and in the Judeo-Christian traditions.

Brooke: So then what do you think of those signs over there?

Brooke: But there’s also a Sodom & Gammorah one —

Brooke: There’s a lot of them —

Kittim: There’s not a lot.

Brooke: No, there are. I just wanna know because that’s like — I mean, that’s a reflection on you all.

Kittim: Our people that we come with– we don’t come here to attack [the gay community].

Brooke: That’s what they’re doing though.

Kittim: No, not really. You need to see again and come back to me with a report.

Brooke: Can I show you? Can we walk over there?

Kittim: Where? Way over there?

Kittim: Don’t put those people in your news, don’t put it in the news.

Brooke: That’s the negative, that’s what we feel from them —

Kittim: We don’t share that opinion with them, they are wrong.

Brooke: But they’re here on your behalf!

Kittim: No, those people are wrong, I would like to remove them.

Riese: You should then, you should remove them.

Kittim: We are here to talk about marriage between man & man and woman & woman.

Brooke: That’s what we thought too, but then we saw all this stuff over there about how they hate gay people.

Brooke: Just pay attention to the people who are in charge?

Kittim: Over here you will not see that, look at that– (reads sign) “A Day to Proclaim a Voice in Favor of Matrimony Between Men & Women.” That’s our message today, we are not against the gay community, we have respect for them.

Brooke: Then what are you going to do to break off the people who are saying those things, because that’s where the poor reflection on you all is happening…?

Riese: Why don’t you have signs that say you are for civil unions?

Kittim: You can go to them and say, ‘Sir, I have spoken to someone who says that your sign is wrong’, go over there, I give you that authority to go over to them.

Brooke: Do you have a card or something that we can show them?

Kittim: No, but you want to take down my name?

Brooke: Yeah, I’d like to in case we have some follow-up questions.

Kittim: This is not a protest against that, it’s against redefining marriage…

Big Man: What college are you working for?

Brooke: Um, Duke University. But I’m up here for the summer.

Brooke: I’m a sociology major. This is my summer project.

Big Man: I need to have the two names of them.

Brooke: Yeah, of course. [Writes down our names]