Hi Auto-Straddlers! It’s me Laneia (formerly known as “Green”) here with our brand-new AS feature, “Girl in the World” (as explained in our fancy header up there). We kick off GITW today with a dispatch from Vicky, an Irish cyber-friend of mine who recently had a fantastic experience in Berlin, Germany … so without any further ado … here she is! 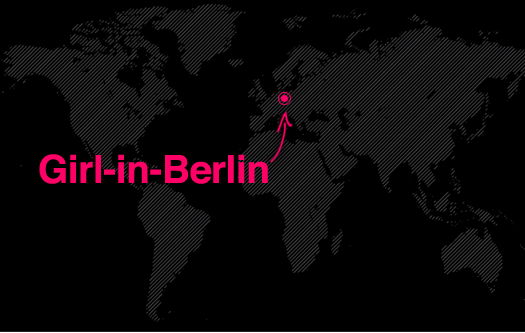 Berlin was beautiful at first sight, even from the limited route on the bus from the airport — the juxtaposition of old world classical architecture and high tech modern, all the trees and the massive 495-acre former hunting reserve-turned-public-park right in the center of downtown.

I saw a girl at the cinema with her bare feet up on a chair drinking a beer and I knew I’d been right all those years ago when I first had German in secondary school — Berlin is my kind of city.

I went to Berlin to see Metric, a band I’ve loved for the last three years with an adoration/all-consuming obsession that I reserve for an incredibly select handful of groups and artists. So the plan was simple: get to Germany, soak up the city for the first evening, see as much of Berlin as possible the next day before attending brilliant Metric show, seduce Emily Haines, stay up all night in the city that never sleeps and fly back to Nantes at 7am. That’s right: Me, Emily Haines, Berlin, 38 Hours. Brilliance. Music. Beauty. Art. Let’s go!

I arrived in awe of Emily and I left loving her more but also truly loving Berlin. 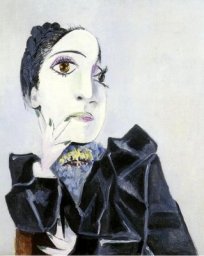 First stop was the Berggruen collection, home to over twenty Matisses (my favorite artist) and — to my surprise — also home to an incredible collection of Picasso’s assembled by curator Heinz Berggruen, a close friend of his. There were notebook doodles from age 16, classical drawings from his early twenties, and beyond. It’s weird sometimes to see the same handful of artist’s work every time I travel to a different city. It’s like catching up with old friends in different places with new perspectives.

Later the cheap traveler’s tour bus, aka public bus #100 took me to Tiergarten, the Reichstag, the Chancellory, Bellevue Castle, the Brandenberg Gate, Humboldt University (Marx and Lenin were former students and Einstein a former professor – and yes I did check to see if their were Masters courses I could do there), the German National Opera, through Museum Island and then back to the TV tower at Alexander Platz. I then dashed Run-Lola-Run style to the Annie Leibovitz exhibition at the C/O (in arty alternative ‘hood in Under den Linden) before closing time. I loved it, it was a cool blend of professional work and family photos — but I hadn’t signed up to see her vajayjay or Lance Armstrong naked on a bike.

I rushed like crazy from the C/O — taking the S-Bahn, U-Bahn and a Tram — to the venue. Apparently Germans don’t believe in pre-queueing for gigs unlike back home or in the UK, so I ended up seventh in line alongside a cute Austrian lesbian couple, with twenty minutes to spare before doors. One of the girls was a physicist which meant there were TWO girl lovin’ physicists who speak German at this Metric show. (The other was obviously ME!) 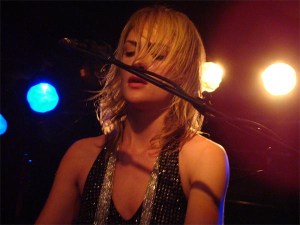 While we’re still waiting outside, the band oh-so-casually strolled by. When Emily said “Hi” I could barely stop myself from swooning and the cute couple beside me couldn’t help themselves at all — they kissed in celebration while I silently yearned for a high five. Once inside, I was caught off guard by how small the stage was, and that no one was up front. Everyone was at the bar!

I made a dash for the stage, stunned by how easy it was. I mean, you dream of seeing your favourite band in a tiny venue, front row centre, and here I’d actually managed to do it, with little-to-no effort. Dumbfounded, I looked right and left and met Lavern, another diehard fan. She was also slightly stupefied and explained she’d even asked the staff if this was the right room ’cause it was so small. We rambled on (I’m Irish, I possess the inherent gift of gab) about music and cameras (she’s also into photography) and her life — she’s from the Philippines but is studying German in Mannheim, so we geeked out a lot and talked about German and Venice, until the show interrupted our convo.

The gig itself was nothing short of mind blowing. Emily opened by declaring their intent to ‘rock our faces off’ and trust me, they succeeded. They played tracks predominately from the new album and, even though Fantasies has only been out a month, this crowd knew every word. Emily and the guys were as energetic and as sweaty as we were.

They dedicated the song ‘Front Row’ to those of us in the front row, being crushed by everyone else’s adoration for them. The dedication was followed by individual high fives for us all. At one point, Emily even asked me and another few to feel the sweat on her arm to prove how much energy she was expelling! Of course there was the now standard German moshing, and with no barrier to speak of, I was having to brace myself so as not to be hurled on stage into Emily or hit in the head by Josh’s bass, which probably would’ve been worth it. It was sweaty, pulsating, crazy joy for 2 hours, ending perfectly on an acoustic version of Live It Out, with all the band and us singing along. Magic. 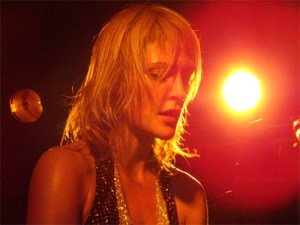 Before I could even revel in the memories of what had just passed, I was being introduced to Lavern’s warm American/German friend, Chris, and invited to stay for drinks. The gig venue then switched into club mode, with 2 rooms with DJs, an outdoor deck and balcony with old cinema seats. After dancing, drinking and chatting some, our group of three quickly became 6, and not one of us of the same nationality. No matter how many times we went outside for air we struck up conversations with different people. It was a fantastic random night.

I was bouncing my newly-discovered thoughts on Berlin off Chris, who had been living there a year, and talking to Anna about Utrecht, where I hope to do my Masters. Somehow I found myself explaining the rivalry between the Gators and the Seminoles to Lavern, despite Chris being the one from Florida. Maria, whose Dad had 8 generations of family from Madrid, but whose Mum was Basque/Sicilian, had been sent to French school in Madrid. So here I am, an Irish girl, speaking French in a German city to a Spanish girl — typical of such an international hub like Berlin. 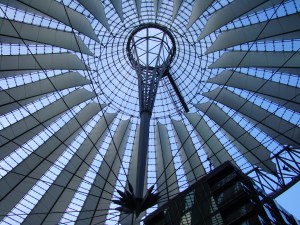 Even the music was brilliant — everything from Peaches to Empire of the Sun to the Postal Service. Since clubs and pubs are open 24 hours in Berlin, we danced and chatted until nearly 5 a.m. Every time I tried to leave, they played another song I couldn’t dream of not dancing to. Eventually I had to either go or miss my flight back to France (something I considered many times)!

It was truly the perfect day: art, photography, gorgeous weather, amazing music, new friends, fabulous conversation and my goal of seeing Metric complete, surpassing anything I could have imagined!

In my expert evaluation after being there for a day and a bit, I think it’s safe to say it’s quite possibly the coolest city on the planet. Rarely does a city have such an impact on me in such a short period of time. I’m definitely going back, I mean I could see myself even moving there in the not-so-distant future. As for my future with the lovely Emily Haines, I’ll keep you posted…

Hi! Yay! Berlin! It’s me again, Laneia, here to give you a little more detail about this new feature (what you haven’t already gathered from the header and my intro)

Do you ever feel like the future of this bright and shiny world is in your hands? In your wee little hands? Sometimes, in my mind, I refer to you as the Future Farmers of America, but that title doesn’t suit you, clearly. It has the word FUTURE in it, though, which makes it sound very exciting!

But yeah, so you’re all very NOW and HIP and UNIQUE and probably come with your own sound effects, which is why we can’t get enough of you! You probably Twitter and have your own blog and sure, we could read your Facebook feed, but maybe a few of you have a little more to say? Have you been somewhere, live somewhere, seen something, experienced a night or day or 20 minute train ride that changed your live? Are you planning to hit up awesome events in your spot in the world — Amsterdam Pride? No-on-8 Rally? Womyn’s Music Festival? Trans-Prom? Black Lesbian and Gay Pride Day? — anything at all you think Autostraddlers will want to know about?

Also, maybe you enjoy writing and taking pictures/short videos? If you answered yes to any of these rhetorical questions, I have exciting news! Autostraddle is proud to present our newest feature, Girl-in-[Enter City/State/Country Here], where hot young women like you — women on the edge of something edgy — will give us a peek into the exciting things happening where you’re at.  Or maybe it won’t be exciting. Maybe it’ll be introspective and real and make people cry. Maybe D)All of the above!

Listen up! If you’re interested in sharing a little something with the group, send a super brief outline, along with a couple of photos, to green@autostraddle.com. If we like what we see, we’ll contact you!
[ad#postads]