UPDATE 11:58 AM SUNDAY: Yahoo! Finance has now mysteriously changed all the timestamps of the top stories (this was not a glitch-free process, at various times of night some stories were listed twice under different timestamps as they attempted to cover their tracks) mentioned in this post, and the article of contention has completely vanished from the site! This article – RNC Chief: Gay Marriage Will Hurt Small Business (which was nowhere else online last night) has now made the rounds and is properly credited at Huffington Post under the header ‘FEAR,’ citing Steele by name in the headline rather than as the ‘RNC Chief’.

Yahoo! Finance si now back to their regularly scheduled programming, which, as predicted, is totally boring to me, and totally interesting to people who understand how to make, save, and accumulate dollar dollar bills. Who’d’ve thought we’d find recession doomsday predictions more calming to wake up to than what we saw the night before?

SUCCESS, guys! I’m really happy! THE POWER OF THE INTERNET, Y’ALL! What follows is what went down last night —

3:30 AM SUNDAY: I know Sunday is supposed to be a happy day. But this sh*t is bananas, and it’s my duty to alert you! Yahoo! Finance, a website which brings business & finance news and information to over 20 million unique visitors a month, has made a very interesting and blatantly uncharacteristic selection as its TOP STORY today: 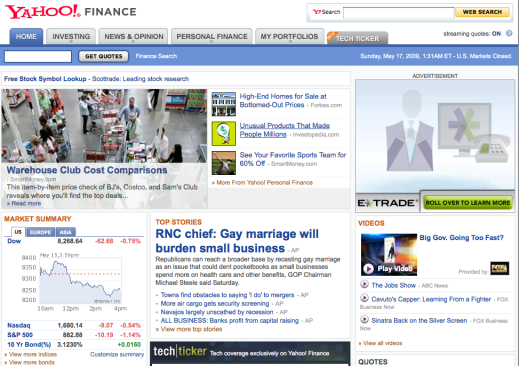 This is a website for business information. Typical headlines include Dow Jones plunges, company mergers, and government bailouts. Imagine checking out your daily agenda-free informational source — Publisher’s Marketplace, Gizmodo — and seeing a blatantly political article that (regardless of agenda) contains no practical or informative content whatsoever. This never happens on Yahoo! Finance, EVER. This is completely and utterly out of the blue bizarre, and its placement suggests alarming necessity to anyone perusing the site (aka everyone!)

Just so you know, here’s how popular this particular site is amongst people looking for information about investment and finance: 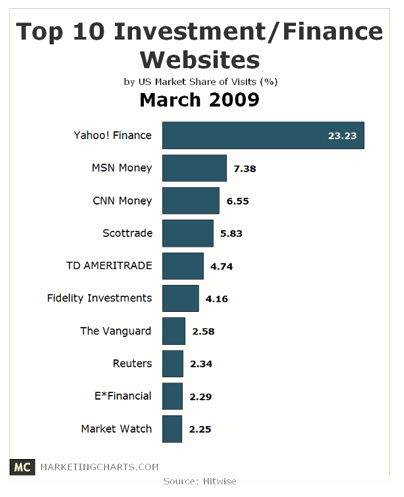 Here’s a snippet of this article — its content in and of itself (regardless of prominent placement on a business website) is enough to make me scream at the wall (it’s 2 A.M., live human options are limited):

Republicans can reach a broader base by recasting gay marriage as an issue that could dent pocketbooks as small businesses spend more on health care and other benefits, GOP Chairman Michael Steele said Saturday.

Steele said that was just an example of how the party can retool its message to appeal to young voters and minorities without sacrificing core conservative principles. Steele said he used the argument weeks ago while chatting on a flight with a college student who described herself as fiscally conservative but socially liberal on issues like gay marriage.

“Now all of a sudden I’ve got someone who wasn’t a spouse before, that I had no responsibility for, who is now getting claimed as a spouse that I now have financial responsibility for,” Steele told Republicans at the state convention in traditionally conservative Georgia. “So how do I pay for that? Who pays for that? You just cost me money.”

Oh. Damn! We did? We just cost you money? With our like, health insurance needs? Eeek! Sorry!

As the editor of this website, I’m on gay news outlets like Queerty all day. I check google news for “gay” alerts periodically. I’m on top of the top stories. Though this could be different by the time I wake up tomorrow, I am telling you that this story was NOT a top story today (it was published at noon on Saturday May 16th, according to the article). ANYWHERE. Someone chose to place this story on THE #2 MOST POPULAR WEBSITE IN THE ENTIRE WORLD and this selection was approved.

Suspiciously enough, the other “top stories” on the Yahoo! Finance website include:

1)  Navajos Largely Unscathed by Recession: “with half of the Navajo Nation’s work force unemployed long before this latest recession hit, there’s not much fear the job situation could get much worse on the reservation.”

2) Cherry farmers are gonna go broke subjecting their crops to increased air security standards ’cause their fruit is gonna rot. (We all know whose fault THAT is! (sarcasm!!))

What the hell is going on, yahoo! finance? Why don’t you stick to that boring money stuff … leave that bigoted agenda stuff to FoxNews.

Tweet this to your friends, let them know they need to let yahoo know how you feel about their bigoted agenda.

Let me level with you: as you know me — Riese — I don’t got no moneys. I never go to this here “Yahoo! Finance” website for these people with those there bonds and S&P whatevs Nasdaq Stock Symbol Hooha. But I’m hanging out with my business-obsessed friend right now and as I was sitting here reading Dan Choi’s heartbreaking article asking Obama not to fire him and crying softly to myself she suddenly exclaims WHAT THE FUCK?! … and then she showed me the homepage of yahoo! finance. And so here we are. [it’s on twitpic here].

Don’t even get me started on Michael Steele. Clearly he’s a heartless, self-cenetered and self-serving asshat. But that’s — as they say — his own cross to bear.

Also, to leave you on a positive note, aren’t girls pretty? 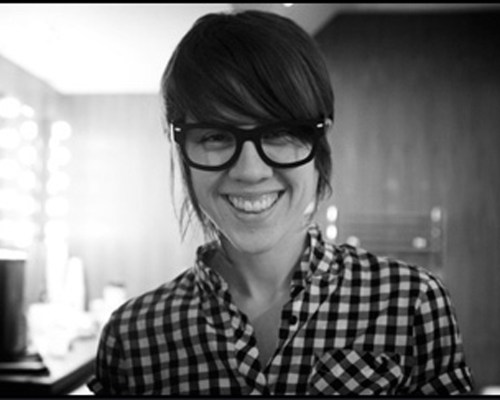 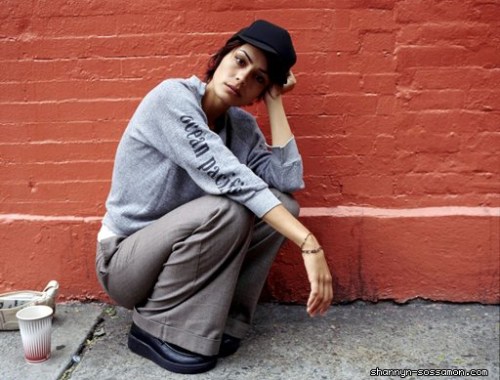 Yeah, they are. YAHOOFAIL NOW