It’s Boob(s On Your) Tube! Your one-stop shop for the week in queer TV! This week on Autostraddle dot com, Valerie Anne prepped you for the new season of Wynonna Earp. Kayla and Carmen and Natalie made a list of 18 LGBTQ women of color crushing TV this year. Kayla also recapped another fantastic episode of The Bold Type. Riese and I chatted about GLOW season two’s big gay storylines. I cried all over the place about Steven Universe. And Kayla ranked the Emmy nominees from Mommi to Mommiest.

I don’t have an update on Younger this week because my DVR didn’t record it and Spectrum keeps telling me it is “not available right now” on demand. Next week! Here’s the other goings on from the TV world.

The season two finale of The Handmaid’s Tale dropped on Hulu Wednesday morning, and I couldn’t help but wonder how things worked out for one of our all-time favs Samira Wiley, errrr, I mean Moira. 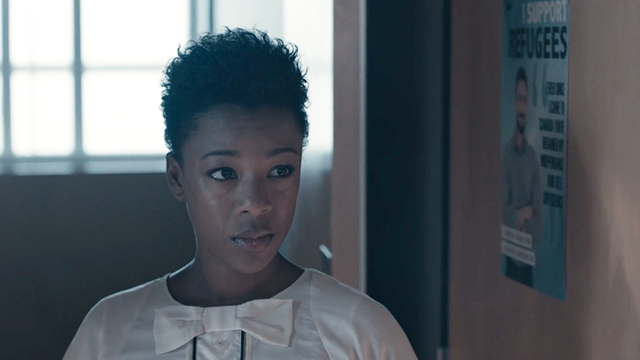 From Heather Hogan: “Her face is literally perfect”. I hardcore agree.

But first, a disclaimer: I watched the first season of The Handmaid’s Tale last year, so I have a basic understanding of the major characters and their relationship to each other. That said, I only made it through the first two episodes of the second season before I decided time lost in the trauma in Gilead was not how I wanted to spend my one, precious life. I think The Handmaid’s Tale is one of the most important shows on television, even when they get things wrong. (To be clear, they do get a lot wrong, especially when it comes to certain themes of race and all the torture porn.) Personally, I just couldn’t handle it anymore! I combed Wikipedia for general plot points, and then fast-forwarded around so I could just watch Moira’s parts. I may be missing some details! I may get some things wrong! But as they say, “Nevertheless, She Persisted!” What a rollercoaster we are on!

Where we left off at the end of season one, Moira escaped the brothel where she was forced into sex work and safely made it to the American asylum community in Toronto. (Yes, the implication of Americans’ being in need of asylum and finding themselves actually welcomed at the border of a neighboring nation, given our current political field, is purposeful and not lost on anyone.)

Moira’s second season arc is about working through some pretty severe PTSD. She’s moved into an apartment with Elizabeth Moss’ husband (also safe in Canada) and another American refugee. Together they are forming their own, new kind of tentative family. It’s sweet — but also, sad? The whole show is sad, so that’s not new.

One night, Moira finds herself drinking away the painful memories of her past at a Toronto gay club. There she catches the eye of a cute girl and they next thing you know they’re fingerbanging in the bathroom. I was so happy for Moira that she finally got to have sex on her own terms! Consensual sex on this show is rare and fleeting, I’m hard pressed to think of another character who’s even had the chance? 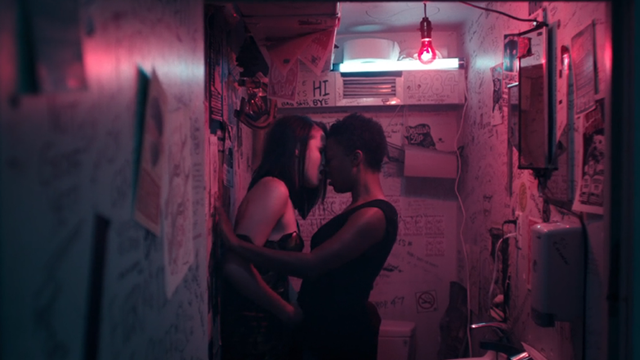 Today the Autostraddle TV Team had to decide if “fingerbanging” was one word or two. It’s a tough job, but somebody’s gotta do it.

Too bad, that joy wasn’t meant to last. After Moira finishes her hook up, she turns her partner’s down the offer to, ahem, have the favor returned (if you know what I mean). She grows cold and distant in the bathroom, shaking off her partner’s advances. When the hook up asks for her name, Moira tells her it’s “Ruby.” The name she went by as a sex worker in Gilead. My boor baby, she’s so broken! She can’t let anyone in.

Later, in a flashback, we find out that in the time before Gilead, Moira was once a pregnancy surrogate to pay off her student loans. That’s how she met Odette — her OB/GYN turned fiancée. We don’t get to watch enough of their relationship develop on screen, but it seems like it was full of smiles and laughter! 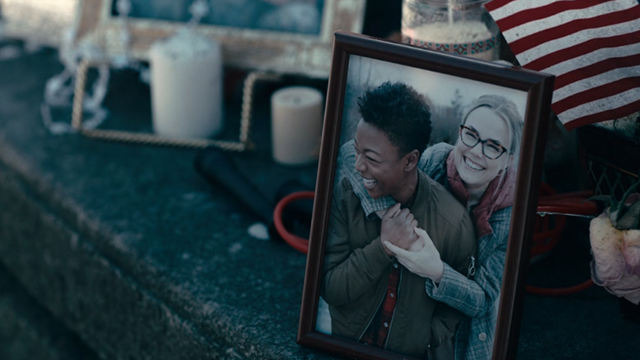 In the wake of a bombing in Gilead, Moira finds out that Odette died sometime ago, alone on the streets. She leaves a picture of them in remembrance at a public memorial in Toronto. It’s her first step in really beginning to heal from the trauma she’s been put through. PS: Samira Wiley still has the best smile on television, and it’s made even more effective and special thanks to its sparring use on the show.

The last time we see Moira this season, representatives from the Gilead government (and Elizabeth Moss’ captors!) are visiting Canada on a diplomacy trip. Moira, along with her found family in Canada stage a public protest to raise awareness against them. In the final shot of her, she’s banging on the Commander’s window, holding a sign that says “My name is Moira.” 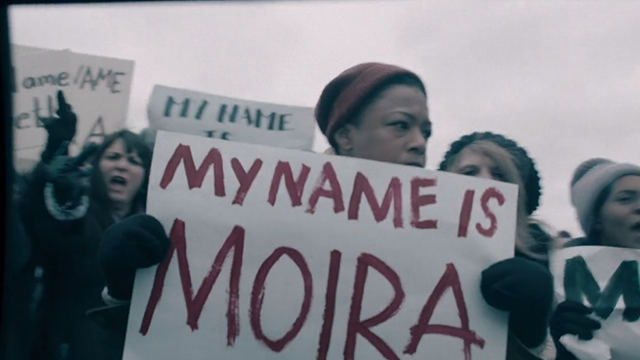 My heart! She’s Ruby no more.

(Alexis Bledel’s Emily is The Handmaid’s Tale other major lesbian character. Her work in the role is phenomenal. Unfortunately, her plot is way too intimately tied to the central violences of the season for me to watch it and still be able to sleep at night! What I gathered is that she somehow escaped the toxic waste labor camp that they sent her to, and after a few other bloody plot twists, is now safely on her way to Canada for asylum with Elizabeth Moss’ baby in tow. It’s my dream that Emily gets together with Moira in Toronto and they become the new Lesbian Avengers ready to reign down pain on the patriarchy! It’s time for the revolution, this show needs it. Stay tuned!)

On last night’s episode of Critical Role, since they are down three players (Laura Bailey and Travis Willingham are on parental leave since they just had a baby, and Ashley Johnson is back to filming Blindspot), they had a guest playing with them, and it was none other than arguably the cutest human on the planet, Ashly Burch. You might know Ashly from the first installment of Life is Strange, where she voiced Chloe Price (and others), or the billions of other games and cartoons she has lended her voice to. Or just from being a tiny ball of adorable with a badass haircut. Her character was butch and brass and our resident gay disaster* didn’t know how to handle herself and eventually flirted with her, as she is wont to do. (*We don’t know for sure how Beau identifies yet beyond “super into Yasha” so I’m using gay as a general term here and because “gay disaster” has a nice ring to it.) Ashly’s character, Keg, seemed to be on board, because every time Beau did something badass, like extract a sac of toxin from a fallen monster with graceful expertise, Ashly would said, “Keg is aroused.” It was a good gay time for all involved. — Valerie Anne 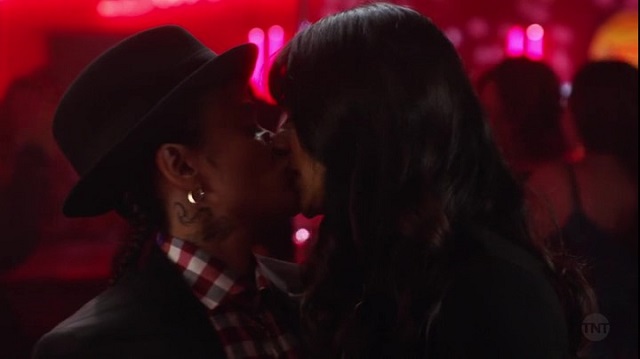 Reunited and it feels so…temporary

With a episode title like “Vaginalologist,” you’d think this episode would’ve been gayer, but no such luck. We did, however, get a glimpse of a newly reunited Arlene and Quiet Ann at the unveiling of Polly’s new male revue. They’re there just long enough to wish a newly engaged Desna well before sneaking out and enjoying some vaginalogy of their own at home.

Looming over Ann’s rediscovered happiness is Arlene’s work with the Sarasota Police Department, who’s moving closer to unraveling the pill mill/money laundering schemes. I fear that Ann’s well-deserved happiness may be short-lived. — Natalie 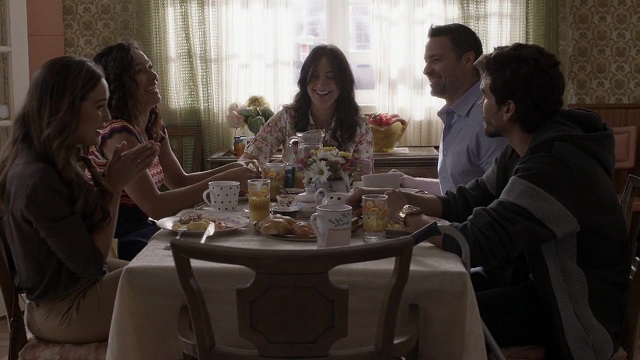 Breakfast and a laugh with the future in-laws

Tonight, Mi Familia Perfecta, Telemundo’s Party of Five-esque telenovela, takes its final, if premature, bow. As secondary characters on the show, Megan and Génesis didn’t get nearly enough screen-time and it certainly faltered when it came to showcasing intimacy, but we still got to see Megan be fully embraced by Génesis’ family and friends. Their storyline was adorable and affirming and an important step for Spanish-language television. — Natalie

General Hospital and The Young & the Restless

Remember our roundtable on TV that breaks our hearts? Well, few things have broken my heart quite like daytime television…and, yet, I’ll keep coming back to soaps because I believe in the potential of the genre to impact the audience. 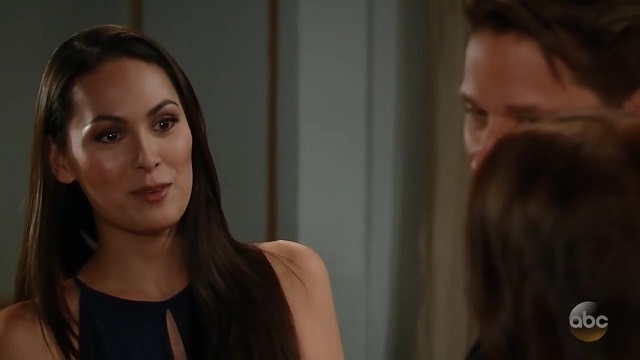 Last week, Autostraddle reader, Shez, alerted us to a new story on General Hospital. Cassandra James joined the soap’s cast as Dr. Terry Randolph, an old friend of Elizabeth Webber’s who returns to Port Charles to visit her friend and consult at the hospital. But, in the years since they last saw each other, Terry has transitioned (James is a trans actress) and General Hospital gives her the stage to share her journey with Liz, her fiancee and the audience. I’m hoping that we’ll see more of Dr. James in the coming weeks. 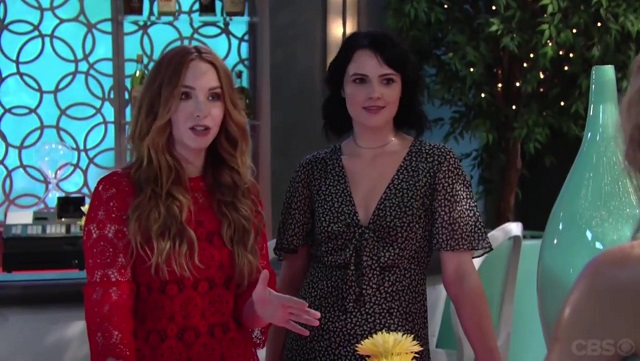 Can lightning strike twice for Mariah and Tessa?

Meanwhile, over in Genoa City, it looks like…maybe…possibly…the Mariah and Tessa storyline that stalled last year, could be picking up again. Thanks to an effort by Mariah’s ex-boyfriend, Devon, and her new wingman, Kyle, Mariah and Tessa find themselves tricked into having their first date.

I’ll let you know, as things progress, if my faith in daytime is vindicated or if I’m just Charlie Brown to daytime’s Lucy, continuing to chase after that elusive football. — Natalie