As a professional lesbian TV critic who’s been professionally lesbianly critiquing TV for over a decade(!) it’s hard to get me to really feel TV in my bones like I did when I was a kid — or, you know, like I did before I wrote recaps about ten hundred thousand fictional gays getting axe-murdered — so I was shocked when I heard myself whimper during Friday night’s episode of Steven Universe, and reached up to feel tears flowing down my cheeks. But these were happy tears! Real, genuine, earned, treasured, happy tears! At the end of the five-episode Heart of the Crystal Gems arc, which included a shocking revelation about Rose Quartz and a horrifying fight between Ruby and Sapphire, Steven Universe went where no animated TV show had gone before with its queer characters — to the altar. 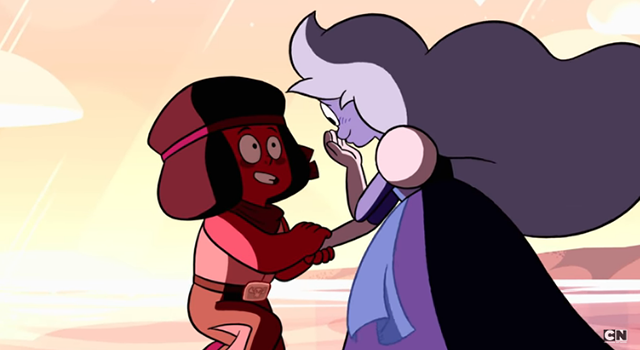 Their wedding came to be when Ruby and Sapphire unfused during the mid-week episode “The Question” because they were in turmoil over the discovery that Rose Quartz was actually Pink Diamond. She’s the reason they became comfortable with who they were, together, after all. She called them The Answer! But if she’s not who she said she was, then who was she to tell them who they were? Ruby took off on a cowboy adventure with Steven and seemed to be having a good time on her own, but at night, by the campfire, she confessed that every cool thing they did was only a fraction as good and fun and right as it could have been if she’d shared it with Sapphire. And so she galloped back home and dropped to one knee and asked Sapphire to marry her, so they could be together even when they’re apart, and as a symbol that their love is their own decision.

And that’s where “Reunited” kicks off, and with a big-stage opening number during which Steven recounts the heartache of the discoveries and deceptions of the last few episodes, as he implores the other Gems to focus on Ruby and Sapphire, just for today. 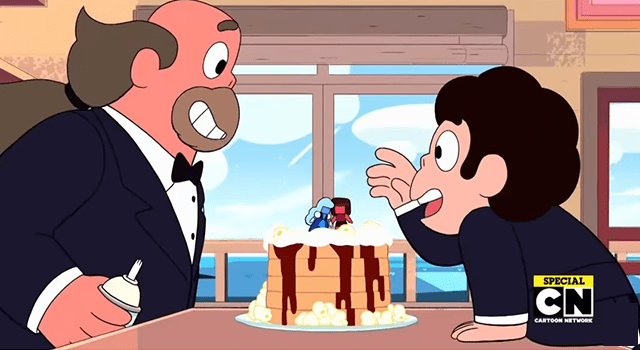 There’s so much to love about the lead-up to the wedding: masc Gems in dresses, femme Gems in tuxes, Bismuth in her armor because it’s the nicest thing she owns, together breakfast as a wedding cake with literally perfect cake toppers, Peridot wearing a dress she very clearly fashioned on top of her regular Peridot clothes, Peridot executing her flower girl duty with gusto and reporting to “wedding commander” Steven that all the flowers had been deployed, Greg strumming “Stronger Than You” on his guitar for the wedding procession, and Ruby rushing down the aisle so fast she leaves a trail of literal fire behind her, which Amethyst has to rush to stomp out.

Oh gosh, and then the actual ceremony. 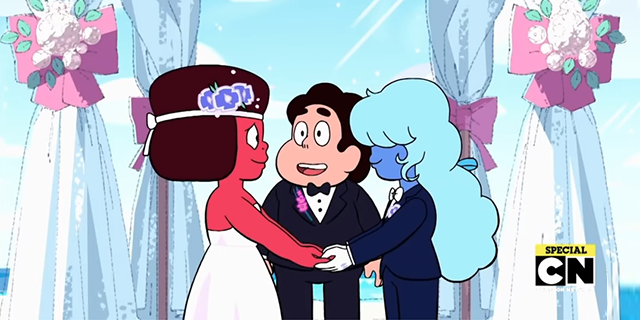 Steven: We are here today to celebrate Ruby and Sapphire, two of my favorite people who combine into one of my other favorite people. You all probably know her as Garnet. She is their love, given form. Now it’s your turn to talk about that.

Ruby: I used to think I wasn’t much good, just one of me on my own. But when we’re together, it feels like it’s okay to just be me. So I just want to be me, with you — and not even the Diamonds will come between us! And if they try, we’ll beat ’em up!

Sapphire: Ruby, my future used to look like one single obvious stream, unbending until the end of time. In an instant, you pulled me from that destiny and opened my eye to an explosion of infinite possible futures, streaking across space and time, altered and obliterated by the smallest force of will. What I mean is, you changed my life, and then I changed your life, and now, we change our lives.

Ruby makes it through Steven’s I Do’s, but Sapphire just can’t wait (another lovely role reversal). And then! They smooch! On their cartoon mouths! On Cartoon Network! On primetime TV! 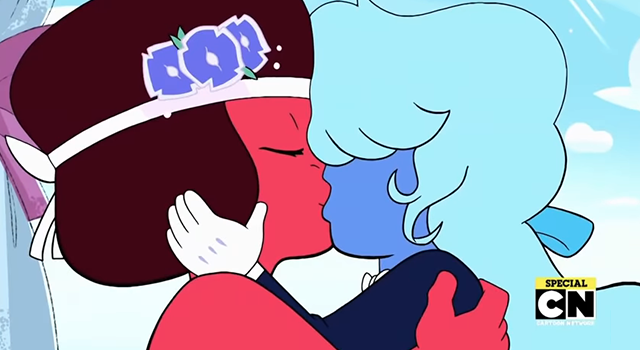 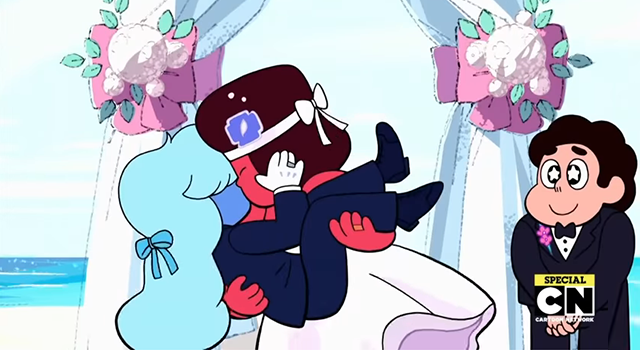 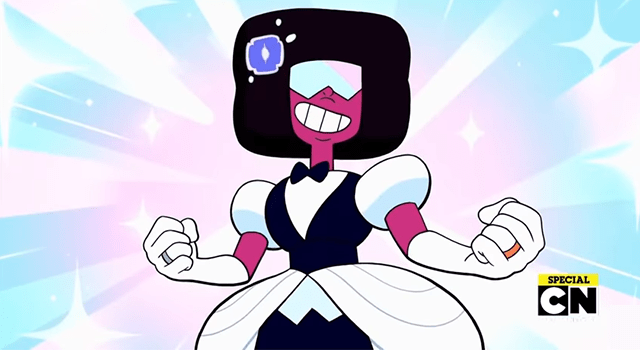 And that’s just the first eight minutes. The last two-thirds of the episode pays off so many other stories five seasons in the making, as Blue Diamond and Yellow Diamond arrive on the scene to use the cluster of Gem shards they forced together to destroy the planet, weeping and raging about Pink Diamond the whole time. There are almost too many surprises to count. The Cluster, for example, fights back! The Gems use the upgraded weapons Bismuth made for them, which they haven’t done since she hurt Steven! And Lapis arrives on the scene to drop a barn on Blue Diamond’s head, while Garnet runs interference!

Blue Diamond: Who are you supposed to be?

Garnet: I am the will of two gems to care for each other, to protect each other from any threat, no matter how vast or how cruel. You couldn’t stop me 5,750 years ago and you can’t stop me now!

Lapis’ arrival really drives home the fact that this isn’t just a group of rogue Gems fighting to save a world they learned to care about; these Gems and humans and felines of all shapes and sizes are a family. Lapis’ arrival also makes plain a theme Steven Universe has been hinting around about for its entire run. One of Blue Diamond’s powers is the ability to project sorrow onto everyone around her, which incapacitates them. Garnet is the only Gem who is kind of able to fight back against Blue Diamond in “Reunited,” but even she falls victim to the crushing sadness being projected onto her. It’s Lapis, who has demonstrated deeper depression than any other Gem, who flings a single tear from her eye and says, “I’ve felt worse!” before using her powers to chain Blue Diamond and cut off her aura long enough for Steven and his family to fight back. Her power is the strength she’s found from healing her trauma and fighting her depression! 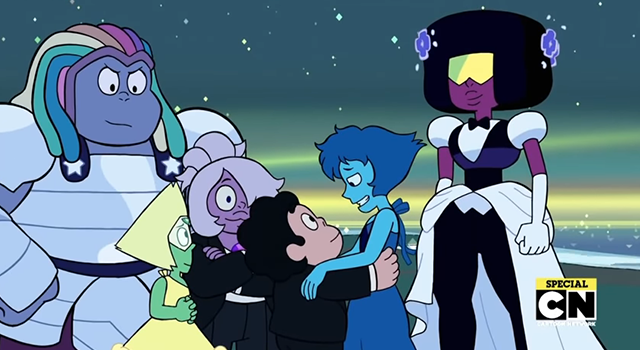 Blue and Yellow are ultimately driven off Earth — for now. And everyone gets to take a deep breath and figure out where they’re going to go, together, as they deal with the aftermath of the Rose revelations and the new knowledge they have about each other and the cluster.

Steven Universe has pushed queer representation further than any other all-ages TV show ever dreamed of doing. Yes, Korra and Asami broke ground when they held hands and walked off into the sunset; Marceline and Princess Bubblegum broke ground growing up and old together in Marceline’s fever dream; Danger & Eggs broke ground when it had a trans girl voice a trans girl character in a Pride-coded episode. One of the Loud girls had a crush on another girl on a very sweet episode of Loud House. And some unnamed gay youths kissed in the background on an episode of Star vs. the Forces of Evil. But a gay wedding? Most grown-up shows don’t have the guts to give their queer characters and their queer audience that kind of tender care and attention.

There’s an awful lot of awful things we could be thinking of, but for just one day Steven Universe let us only think about love.