Welcome to another summer Monday! The sun woke me up before my alarm. Outside my bedroom window, the sky is so bright it’s barely even blue. The grass is lush and green. I recognize that of those sound like clichés. But I’m really trying to take time and express gratitude for the small moments, because otherwise life’s a shitshow, you know?

Anyway, that’s my goal this week. To write down three things every day that I’m grateful for. Today’s list starts with a bright, crisp sunrise and the view from my window.

I hate hate that we have to start with this news, but it’s important that we deal with it. Anti-Trans Protestors Invade London Pride Parade & Are Allowed to Take Lead.

As always, for my money, Heather Hogan says it best:

I have faced a whole lot of hate and oppression as a lesbian, and trans and queer people sharing their own oppressions and taking up their RIGHTFUL space in our community doesn’t erase or invalidate my experiences. That’s a bananas way to think!!

Ok. In other news, during the latest episode of her podcast, Soleil Ho over at Bitch talks with queer trans writer and activist Juno Roche about Queering Virginity.

Angela Ponce Is The First Trans Woman To Compete In The Global Miss Universe Pageant.

By Malaysia Walker: How an Anti-LGBTQ Mississippi Law Denies Freedom to Trans Women Like Me. 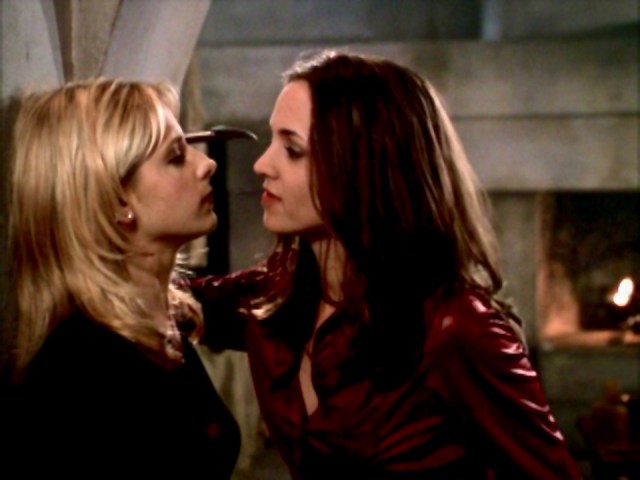 That’s a forever kind of love.

WHEW, I just know that bunch of you out there are going to love to this, Buffy and Faith’s Relationship Taught Me About Queer Thirst.

(And while we’re on the topic of Buffy the Vampire Slayer, I bet you’d enjoy an Autostraddle deep dive into the subject? Here you go. In particular, I still think about Lindsay King-Miller’s “Our Willow, Ourselves” often.)

I hope you don’t mind me taking a quick moment to shine a light on these brave kids from my hometown, Students in Detroit Are Suing the State Because They Weren’t Taught to Read.

The conversation about fashion and disability is growing but far from over.

“That’s what makes me great. I always play everyone at their greatest, so I have to be greater.” — Serena Williams gives her all every time. I know less than zero percent about tennis, but that inspires me. Maybe it will inspire you, too.

A study into how viral videos are turning lesser-known women candidates into political sensations.

This one is for my #BeyHive, The Louvre Now Has a Tour Based on Beyoncé and Jay-Z’s ‘Apeshit’ Video. If you don’t have a trip to Paris planned anytime soon, you can also take the tour virtually like RIGHT THIS VERY MOMENT.

After Realizing Princess Shuri’s Impact, Letitia Wright Is Working To Get More Girls Involved In STEM.

Tarana Burke, the founder of the #MeToo movement, wants it to return to its original, specific purpose: serving as a counter to sexual violence.

A nominee for the open spot on the Supreme Court will likely be announced today; in other Supreme Court-adjacent news, today’s the 150th Anniversary of the 14th Amendment, which gave citizenship to African-Americans after the abolishment of slavery. From The New York Times, it is not too late to give this powerful document its due.

Show ‘em your fire this week! Love ya.

Carmen has written 404 articles for us.