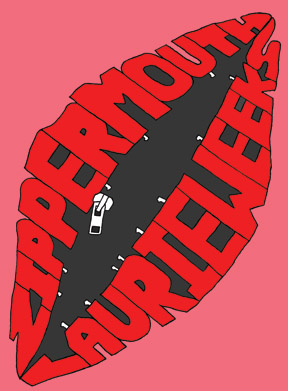 Zipper Mouth, a debut novel from Laurie Weeks, is about being gay, obsessed, and addicted within the 90s New York art scene.

“In this extraordinary, often hilarious debut novel, a portion of which was selected by Dave Eggers for The Best American Nonrequired Reading 2008, an unnamed girl struggles on desperately limited means to show up for the demands of doing laundry, recreational drug abuse, and battling the obsession of an unrequited love in the lurid downtown New York City art scene of the 90s. With comic randomness, an alternating erotic current pulls the reader through the semi-autobiographical boredom of temp job scenarios, painful hangovers, ranting letters to celebrities like Judy Davis and Sylvia Plath, and nightclubbing epiphanies, all shot through with glimpses of a small-town childhood, its isolation fraught with an intense crush on Vivien Leigh and night terrors featuring The Crazy Dad. A doomed fixation on a straight friend, with its attendant frustration and humiliation, forms the structuring theme running through this unforgettable novel.”

Sounds good, right? That depends. Most of Zipper Mouth revolves around two things: obsession and drugs. The parts about obsession are almost endearing and definitely a fairly good depiction of being youngish and in love with a straight girl. The parts about drugs read like a purposefully obtuse laundry list of pharmaceuticals. While it is admittedly refreshing to read a story of addiction that doesn’t focus mainly on eventual redemption, the unnamed protagonist’s complete lack of self-awareness and reflection seems tiresome, not to mention forced and false, since there are plenty of both of those things in other parts of the book.

Weeks’ work has previously appeared in Vice, The Baffler, Nest, Index, Art on Paper, Out, LA Weekly, and Mirage/period[ical], and in the anthologies The New Fuck You: Adventures in Lesbian Reading and The Best American Nonrequired Reading 2008. She also contributed to the screenplay for Boys Don’t Cry, which you may have heard of.

Zipper Mouth has also received mostly positive critical praise. Eileen Myles, author of Inferno, said that, “Laurie Weeks’s Zipper Mouth is a short tome of infinitesimal reach, a tiny star to light the land.” Michelle Tea, who co-founded Sister Spit (which Laurie Weeks has toured with) and writes poetry, said that, “Zipper Mouth is a brilliant rabbit hole of pitch-black hilarity, undead obsession, the horror of the everyday, and drugs drugs drugs.” It may or may not go without saying that if you like Michelle Tea, you might like this book (and that if you don’t, you wont). And Publishers Weekly called it “brash, exuberant … Dreamy, impressionistic, and rapturous, this brief volume is an ecstatic love story.”

Zipper Mouth is really, really sweet in places and really, really obnoxious in others. It’s coming out from Feminist Press this October. And if you can’t wait that long to have opinions about it, here are two of my favourite parts:

“I decided I was in love with this girl so I couldn’t eat, couldn’t sleep. I smoked cigarettes and lay on the bed. I wanted her to drop by in the afternoon for a nap. It didn’t seem likely and this was part of my pleasure, like the agony of fixating on a dead movie star the way I’d become obsessed at age fifteen with the long-decomposed actress Vivien Leigh, a.k.a. Scarlett O’Hara, and her later, more bummed-out incarnation, Blanche DuBois. Instead of rock stars, I had pictures of Vivien all over my room, glossy publicity shots and film stills I’d ordered or simply received in the mail, gifts from sad obsessives who advertised, as I did, in the back pages of Nostalgia, Illustrated, a creepy classic-movie magazine for shut-ins and losers that I’d stumbled across on the racks at Consumer’s Supermarket while leafing through Seventeen and holding my breath against the stench from the sugar beet factory reigning over adjacent fields. At night I lay awake in sadness, grieving that Vivien had died alone, coughing herself to death consumptively long before I was old enough to intervene. “She was a great actress,” I said morosely to my friends, trying to visualize her having sex with Laurence Olivier, an image not so easy, really, to wrap your mind around. Part of her allure was the fact that she spelled “Vivien” with an e, not an a, the e more refined and seductive, the a somehow thudding and crude, witness the barbarian Vivian Vance.”

TIMES YOU HAVE TOUCHED ME

1. You were showing me how to do a yoga stretch. I was standing up and you placed your palm on the back of my neck, the tip of your finger at the end of my tailbone. Imagine my surprise. “It’s okay,” you murmured. Just relax.” I held my breath. “It’s just a technique,” I told myself, “not an emotion.” Gently you bent my spine forward and my vertebrae sizzled and went up in a puff of smoke where you touched it.

2. There are no other times. Except for that incident where you applied some cherry colour to my lips. We were dressed in matching outfits for some trip to the disco and I’d forgotten my lipstick. “Here,” you said. “Try this new color.” You wore black eyeliner and leaned in. Impulsively I said, “Put your whole hand inside my mouth.” You laughed. You held my head and stroked the red stick against my lips.

3. That’s a lie. I was sliding lipstick across another girl’s lips at some dance thing, a sexy girl to be sure. I liked flirting though she made me nervous. “Put your whole hand inside,” she said, and I laughed. Do I wish I’d said that to Jane or not?