Joe Solmonese is leaving the Human Rights Campaign in early 2012, the HRC announced on Saturday. The story first broke at Pam’s House Blend on Friday. 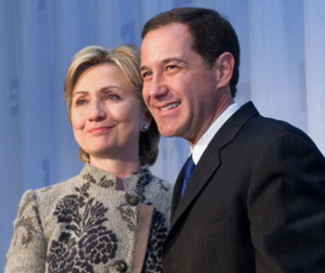 Solmonese will not renew his contract, which ends March 31 2012. According to Pam’s House Blend, his departure will prompt a larger staff change.

You may know Solmonese as the guy who emails you a lot. Solmonese was appointed president of the HRC when he was 40 years old, in 2005. In the press release, he stated that leading the HRC “has been an inspiring experience and a complete privilege. I could not be more proud of our staff, our volunteer leadership and of the extraordinary progress we’ve made together as a community.”

Since Solmonese has taken over, the HRC has seen same-sex marriage become legal in 6 states, the passage of the Matthew Shepard and James Byrd Jr. Hate Crimes Prevention Act, and the repeal of ‘Don’t Ask, Don’t Tell’, among other things. The HRC now has more than 1 million members. Here is a full list of things Joe Solmonese has done (with the HRC).

Solmonese and the HRC have also been on the receiving end of a great deal of criticism during Solmonese’s time with them. Many felt that he was “too patient” with Obama on issues like DADT and DOMA, and urged activists to wait and see what the President could accomplish instead of demanding change. HRC under Joe Solmonese was criticized by gay conservatives for being too leftist, by leftists for being too moderate, and by trans* people and activists for leaving them behind. Pam Spaulding of Pam’s House Blend went so far as to call for his resignation last year.

By any sane performance metrics, he has failed to successfully lead. Promises like those made in the “This year we are going to bring down DADT” video at the HRC Carolinas dinner on Feb. 27 were used to extract money from low-info, fat wallet attendees. It’s rinse and repeat at events like that around the country and there is precious little to show for it in terms of the major promises made by Solmonese — and this President… Joe Solmonese should do the honorable thing and step down. It is shameful to cash all those checks without the follow through on the job. The White House was never put under serious pressure; the late calls now in the e-blasts for the President to do something ring hollow after the toadying that has gone on for two years.

But Solmonese is not retiring for good; he will continue his work despite critics, albeit outside of the HRC. He will keep fighting for gay and lesbian rights, he says: “As I explore new professional possibilities, I plan on continuing to pour my heart and soul into improving the lives of members of our community – from battling proposed marriage amendments to creating more equitable workplaces to ensuring the President Obama is reelected for a second term.”

There’s no doubt that Solmonese has been incredibly influential for the HRC and his departure may change the game for the organization.

So which direction will the HRC head in after March? There’s hope that the new leadership will take a more bi and trans-inclusive stance, though it’s hard to say until a new president has been announced. Members of the HRC’s volunteer board will work with an executive search firm to help find a replacement.