Wonder Women! The Untold Story of American Superheroines is a new documentary being shown on PBS and it looks awesome. Wonder Women traces the fascinating evolution and legacy of Wonder Woman. From the birth of the comic book superheroine in the 1940s to the blockbusters of today, Wonder Women looks at how popular representations of powerful women often reflect society’s anxieties about women’s liberation.

It also features the familiar faces  and opinions of Gloria Steinem, Lynda Carter, Lindsay Wagner (Bionic Woman from the 1970s television series), Kathleen Hanna, and Trina Robbins (author and comics “herstorian” and generally awesome famous graphic novelist). You can watch the entire Wonder Women! The Untold Story of American Superheroines here on Independent Lens from PBS, which is hosted by Stanley Tucci, if you needed yet another reason to tune in. 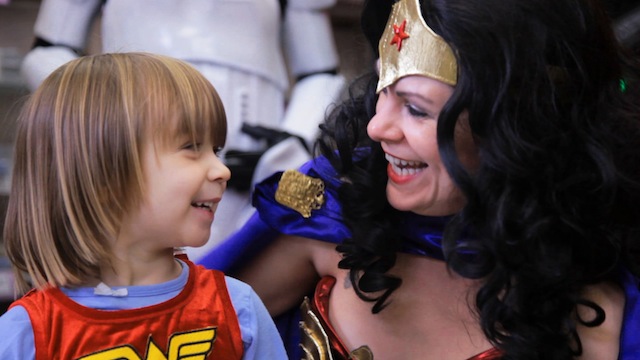 I love Wonder Woman. That’s why I was especially excited to see a cultural analysis of the character and what we can learn from powerful women in our society (hint: it isn’t “You Can Have It All!”). The Wonder Women documentary takes all of this into consideration, including the following,

In our era of increased plastic surgeries and emphasis on “looking good” rather than acting powerfully, many psychologists, media and social critics have long decried the fact that women are bombarded with images of physical perfection and portrayals of their gender purely in terms of sexual attractiveness. Wonder Women counters this by reflecting on why our culture struggles with images of women triumphant beyond the domestic arena of relationships and family. Exploring how our highly visual culture places more emphasis on girls’ and women’s looks rather than on their deeds, Wonder Women urges women to claim the action genre — and media in general— as their own, if they want to change how they are represented.

Last week, a panel convened to discuss the documentary and further talk about what needs to change in the media. Although the represented opinions in the Wonder Women documentary aren’t particularly diverse, the panel was, featuring Susana Polo (Founder/Editor of The Mary Sue), Karen Boykin-Towns (Vice President, Worldwide Policy at Pfizer), Dr. Jonathan Gray, (Assistant Professor of English with John Jay College), feminist activist/speaker Shelby Knox, and So-Chung Shinn (co-host of The Portfolio TV). You can watch the entire panel here if you’ve got yet another spare hour.

Racialious has a great recap of the panel, which includes a lot of talk about Buffy, just to let you know. I can’t tell which part is more interesting, the documentary or the discussion it raises. There are a lot of interesting points brought up, including why there’s never been a Wonder Woman movie despite the popularity of the 1970s series starring Lynda Carter, merchandising issues for young girls (if it’s not girly and pink, why bother trying to sell it?), and why women are taught that there’s a limited number of spots for us in higher positions so the patriarchy convinces us to pull down one another in order to get ahead. Did you all know that the all female X-Men/X-Team series coming out in a month was originally pitched years ago by Marjorie Liu, but Marvel turned her down? And now that it’s written and drawn by men it’s being released? Now isn’t that interesting?

Watch Wonder Women! The Untold Story of American Superheroines on the PBS website and the panel on Livestream.