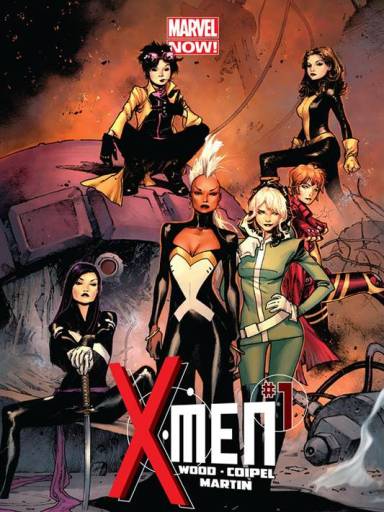 A relaunch of X-Men is going to feature an all-lady series, including all of my favorite female characters: Jubilee, Kitty Pride, Storm, Rogue, Rachel Grey, and Psylocke. X-Men has a history of featuring strong females, and I have high hopes for how well this series will be written even though it is authored and drawn by two men, because really, this would have been the perfect opportunity for a female writer and artist. But Marvel is making baby steps, at least, because the writer, Brian Wood, seems to know what he’s doing.

He says of the writing the new series,

Cyclops and Wolverine are big names, but taken as a whole, the women kind of rule the franchise. If you look at the entire world as a whole, it’s the females that really dominate and are the most interesting and cool to look at. When you have a great artist drawing them, they look so amazing and always have.

The artist, Olivier Croipel, has already proven with this cover that he is adept at drawing women without featuring their breasts (mostly) which is a pretty good sign of things to come, in my opinion.

Wood goes on to say that he’s against the “cheesecake” of ‘strong female’ characters in books when the characters are just living up to sexist stereotypes. He said, “I’m not approaching this new X-Men as a ‘female book,’ but I’m writing it as a high action X-Men comic” which is really all that the fans are asking him to do. He goes on to say that he approaches:

the page with the belief that as people, we all have universal reactions on a basic level to things and that’s where the truth lies, where primal human emotions can be found. With that as a foundation, you can tweak the details according to character and gender and personality. So what you get here, if done well, is a very relatable character that should transcend gender lines and have mass appeal. When you approach the page with the thought, ‘Okay, so what should this woman do now,’ you start off from a place of stereotype and bad writing, and there’s no fixing it because that is now your foundation. It’s not complicated, but it does require the writer to see the characters as people first and sex later.

Doesn’t this sound like it could be some amazing stuff?

Naturally, some people are claiming that this series and “fake geek girls” (warning: clicking on that link will take you to a page with an excerpt that will completely piss you off if you’re a female interested in comics) will destroy the comic world.

Can’t we all just get along, reading a comic that is inherently a giant metaphor for being different in the world and then accepting that difference in the fight for equality? Let’s not fight. Let’s instead celebrate together the fact that X-Men has at least sometimes done what so many comics haven’t: to normalize women and put them at the front of a storyline without making them wear hot pants and bustiers. Because it’s about fucking time.