In honor of Bra Week, Drawn to Comics is focusing on Busty Girl Comics by Paige “Rampaige” Halsey Warren. These usually one to four panel comics tell quick, often single moment, stories about the struggles that come from being a busty girl (or sometimes “busty person”). For those of you who consider yourselves to be in this particular demographic, or those of you who know someone who does, you probably already know that a lot of those problems arise from most bras not being built to suit your needs and stores deciding to not carry the few bras that actually do. 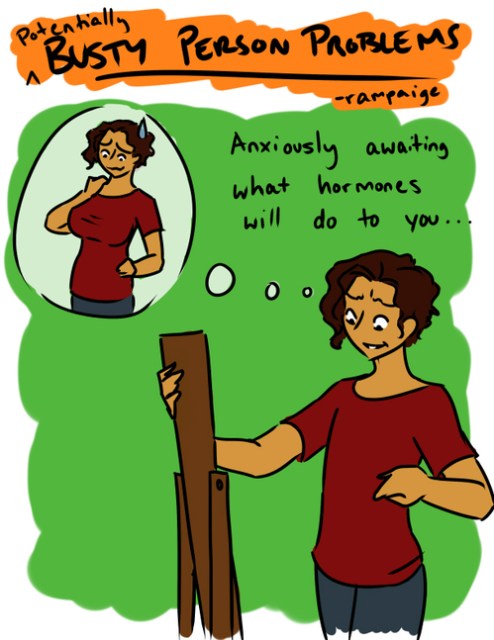 She’s great at having all sorts of busty girls. So often comics will have only white, cis and traditionally attractive characters. Even when people draw a lot of pictures of women of different sizes, they still often all have the same curves, the same hourglass shape. Or if they attempt diversity, they think that means five white characters, a black person and a Latino. That’s one of the things this comic does so well. It portrays women of all different races and ethnicities, cis people, trans people, fat women, skinny women, muscular women, muslim women, queer women, straight women, women with armpit hair and women with stretch marks. The comic brings all of these people together over their shared bustiness. 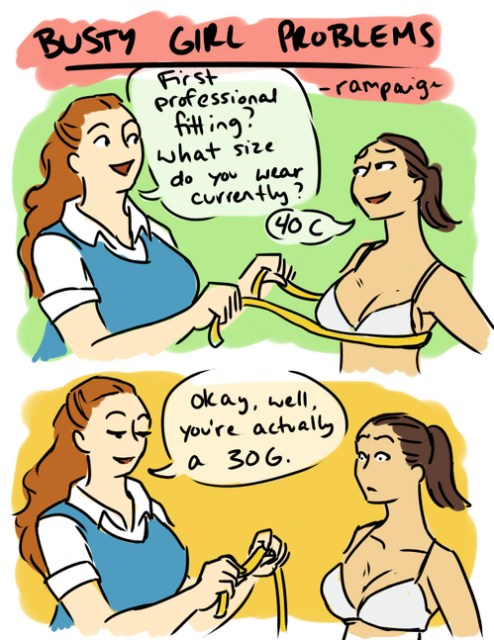 There are so many bra problems for busty people. Busty Girl Comics addresses everything from not being able to find the right size, to the pains of underwire, to the fear that comes from being afraid that washing your one bra that fits perfectly will ruin it all the way to the struggles of finding a sports bra that actually does what it’s supposed to.  I’m sure most of us can relate to at least a few of these comics, even if we don’t normally consider ourselves to be extra “busty.” Many of the problems Warren covers come from the Male Gaze and the limits that the fashion industry places on women’s bodies. Because of the wide array of problems she covers, the comic is always creative and exploring new grounds. If you go through a couple of comics without being able to relate to them, you can be sure that you’ll be nodding your head in solidarity any minute. 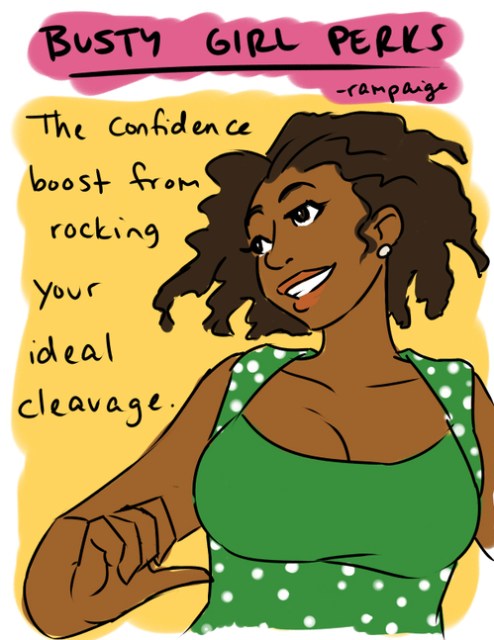 Not everything is bad for busty people though. There are plenty of instances where Busty Girl Comics shows the brighter side of being busty. You’ve got a free place to put your cell phone, when you actually do find a bra that fits the feeling is amazing and you can make dresses look absolutely stunning. Warren makes sure that the comic isn’t all dreary and breaks up the “problems” with “perks.” Also, things never get totally down, because Warren makes sure that the comics, even when they’re showing the bad side of things, she always remains optimistic and body positive. The people that she draws may look exasperated or annoyed, but they never look defeated. 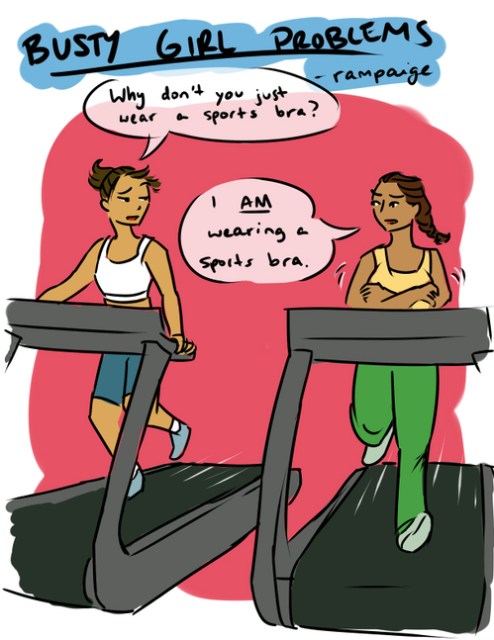 While the comic has ended it’s run, it lasted for a whopping 300 comics, so there’s plenty there. And there’s plenty there for everyone. You might think that this comic is just about busty people who are otherwise skinny, or maybe just plus-size gals, or maybe you think that you have to be a certain size to be considered busty. However, as Warren points out, “if you ever feel like you’re encumbered by your breasts (if they ever get in your way, make you feel awkward, etc.) then you’re busty! There isn’t a line where one size is busty and the next size isn’t. ‘Busty’ depends entirely on the person.” Even if you don’t ever feel that way, you can still enjoy these comics for the fun, intelligent and cute things that they are. The art is colorful and vibrant, and the people’s expressions are spot-on. You might think that reading 300 comics on the same topic might get boring, but Warren deftly manages to avoid that.

Warren is even so helpful that she provides tons of links to bra resources and online stores where you can buy bras that fit all types of bodies. She also has a store where you can buy not only books of the comics, but also shirts and pins. Now that Busty Girl Comics is done, Warren lives in Burbank, California and has a new webcomic called AHTspace, about a group of artists who share a studio space in Massachusetts. A great way to keep up to date on everything she’s doing is to check out her website, Paige One Comics.