N00bs, get your philosophy caps on! Galileo Seven is an episode that really critiques Spock’s logical methods, which often lack emotion, during a fight for survival. It’s the whole head vs. heart conflict, which you can watch with me here. 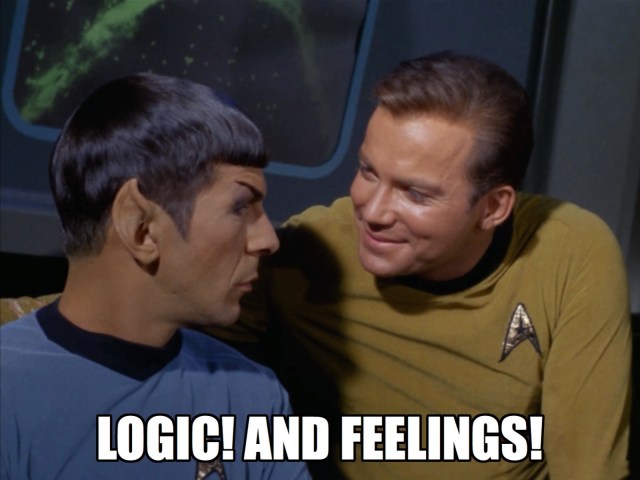 Why these two make such an adorable and effective couple…of leaders.

So many of you have noted in the comments that the TOS I’ve been reviewing is the remastered version, due to the updated CGI graphics added in 2007. This has never been more apparent during this episode, which relies on some pretty lengthy CGI shots. Just to give you an idea of the old vs the new: 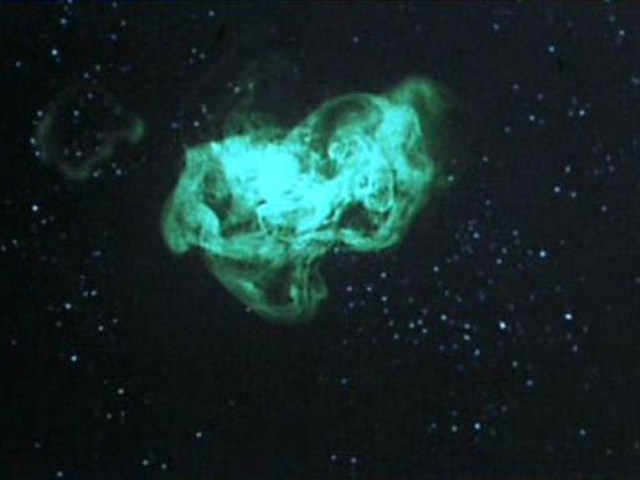 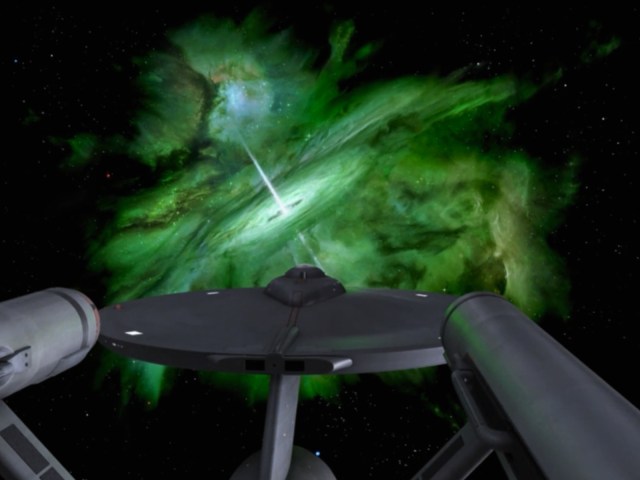 So what’s this giant green thing they’re flying into? Well, it seems to be a quasar known as Murasaki 312. Kirk really wants to explore this thing, but there’s a Federation head honcho by the name of Commissioner Ferris who wants the Enterprise to deliver some medical supplies directly to a planet, Makus III. To Ferris’ displeasure, Kirk decides to go adventuring first!

Any Mass Effect gamers in the house? The Galileo slightly reminded me of the Mako. Driving that shit around was hard. In fact, there are comics and memes dedicated to it! 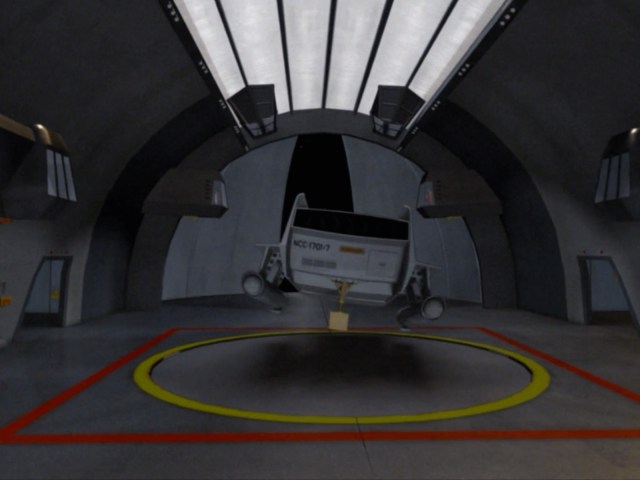 Eaaaasy now. Kirk’ll have a fit if you ding the Enterprise! 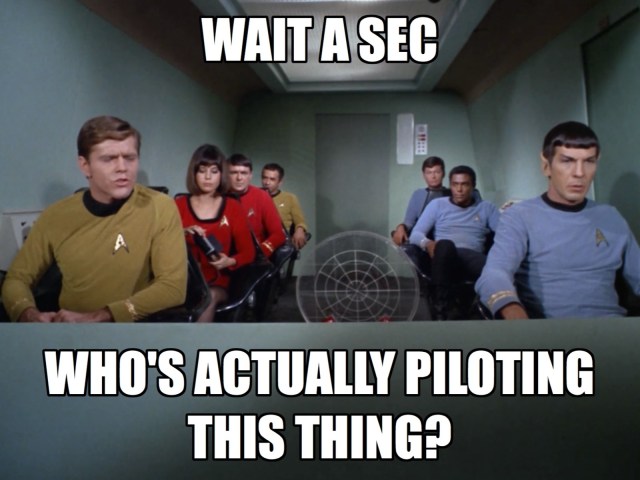 Things go wrong almost immediately. An ion storm causes the Galileo’s controls to go out of whack and they crash land on a planet smack in the center of the green cloud — Taurus II.

Everyone on the Enterprise is horrified by the loss of the Galileo, which they cannot communicate with. The only way to find them in the storm is visually. Sensors and transporters won’t work in this electrical storm. According to Kirk, “Finding a needle in a haystack would be child’s play.” 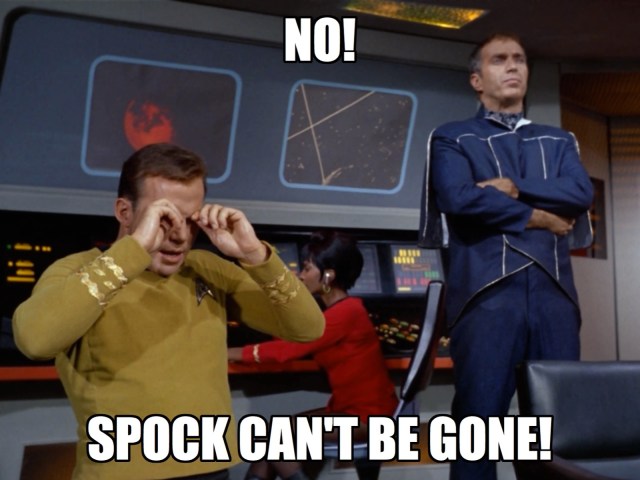 See that meanie standing behind Kirk? Well that’s Ferris, and he doesn’t really give a damn about the crew. All he wants is to fly off and complete their medical equipment mission. He gives Kirk 48 hours to find the crew or abandon them. Ugh!

Conveniently, the Galileo has landed on a planet with breathable air and a survivable atmosphere. Also great news: Scotty, the Chief Engineer is there to make repairs and save the day! 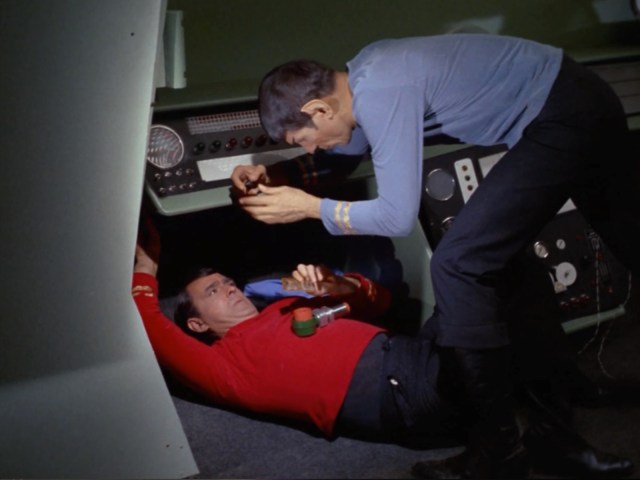 Spock: Okay, now use your MacGyver powers. Here’s a paperclip.

Bones notes that this is Spock’s opportunity for leadership, since he’s the highest ranking officer present. Characteristically, Spock replies, “I can neither enjoy the idea of command, nor am I frightened of it. It simply exists.”

But some bad news! They can’t fly away unless they drop at least 500 lbs (226.8 kg for everyone else in the world and space). So they might need to leave someone behind…

All that leadership! So much responsibility! Spock’s officially up there with Heidi Klum, RuPaul and Jeff Probst. He might need to vote someone off the island soon.

Spock asks Latimer and Gaetano to explore their environment for any information that might help. This is when we learn that Makus III is inhabited by giant, furry beings (they’re never named in this episode) that throw GIGANTIC spears. Latimer gets killed, and I’m surprised since they were wearing yellow. 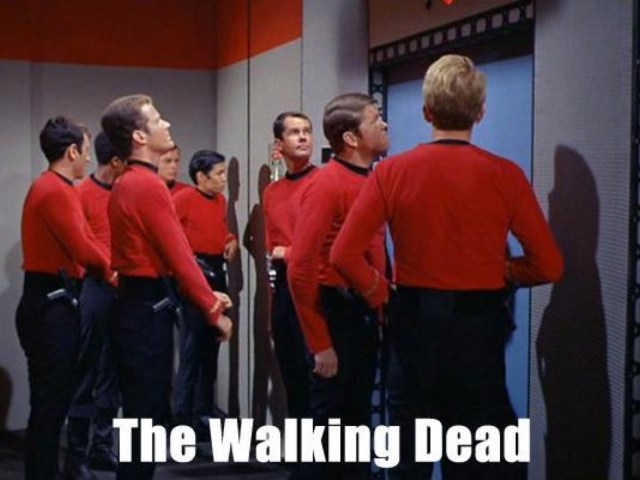 Credit: An Introspective World. Just in case you haven’t caught onto this trend with the redshirts.

Spock compares the weapon to an early human tool known as the Folsom Point. Except these spears are like 20 feet long. 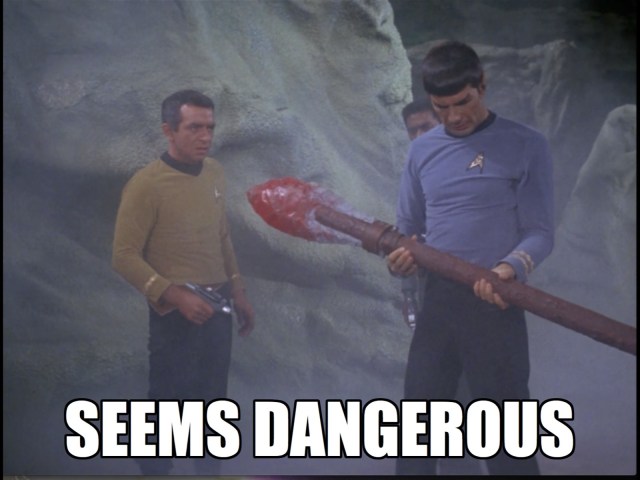 Tensions rise as Spock continues to think about the situation logically, while the rest of the crew wants to give Latimer a proper burial. “We may all die here. At least let us die like men, not machines!” exclaims Bones.

Spock decides that they should attempt to scare the furry peeps away by demonstrating the superiority of their phasers. LOGICALLY this should work. EMOTIONALLY, it just pisses the furry peeps off even more. 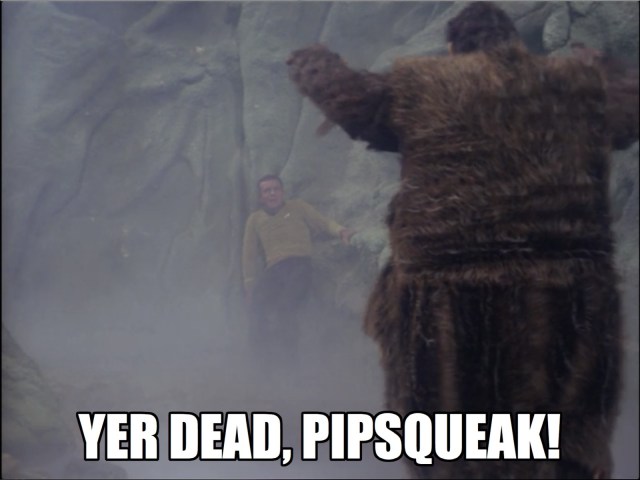 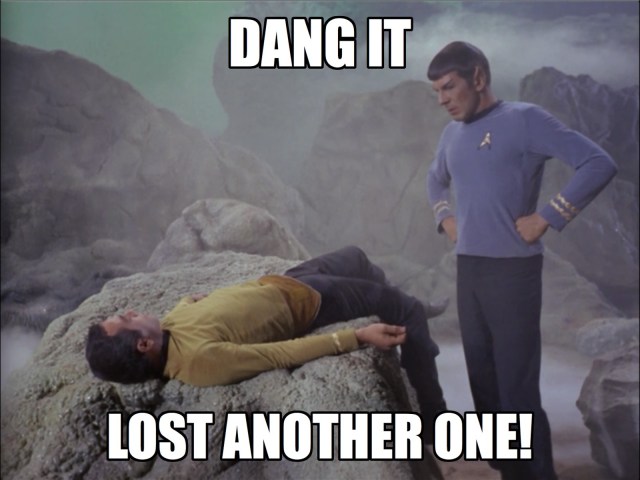 The Problem with Reason

At this point, two crewmen are dead and everyone is mad at Spock. Boma and Bones insist on a proper burial for the dead. Spock argues that it’s irrational and too dangerous — he’s just trying to keep everyone alive.

Here are a couple of issues we’re seeing under Spock’s leadership:

Poor Spock! This episode did give me some clarity on why Kirk is such a great leader — Kirk represents a blend of calculated thinking and human emotion. 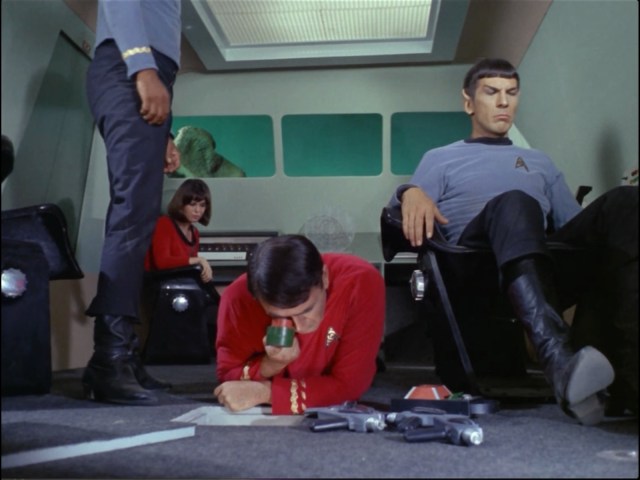 Spock can’t figure out where his logic went wrong.

Luckily, Scotty’s thinking clearly and SAVES THE DAY! He tells the crew that he can convert their phasers into a power source, which will get them into orbit around the planet. Hopefully, the Enterprise will be able to see them, and rescue the Galileo crew.

The times has come for “less analysis, more action!” according to Bones. The furry peeps are back, and they’re SUPER ANGRY now! They’re trying to break open the Galileo with a good old-fashioned rock smashing. 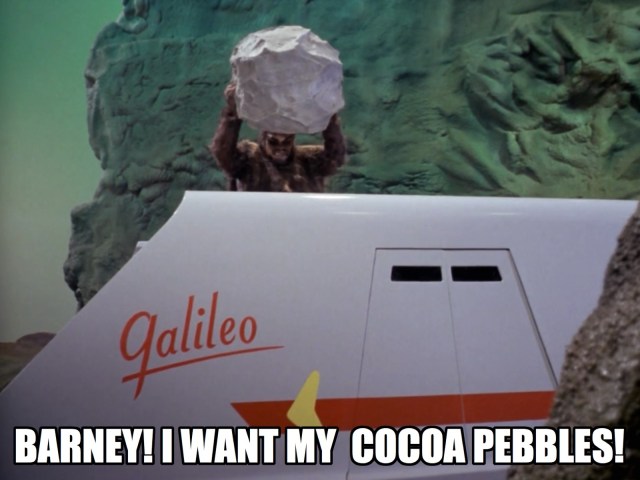 Scotty has another genius idea — to stop the furry peeps from trashing their ship, he’ll electrocute the outside panels and fry them. Here he is, being a total badass. It’s nice to see Scotty in action. 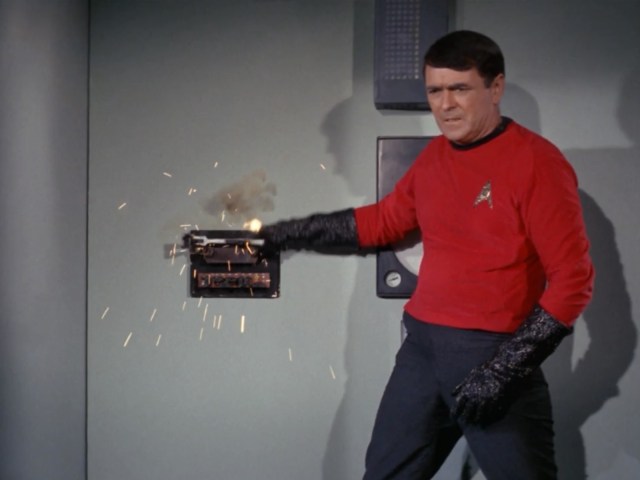 Spock decides to help the crew with a rush burial to appease them. Of course, the furry peeps attack, and Spock is pinned under a giant rock! He screams, “No, go back! Lift off!” Of course, since everyone else has FEELINGS, they rush and help Spock. Faced with the possible death of my fav character, I was screaming at my computer at this point. 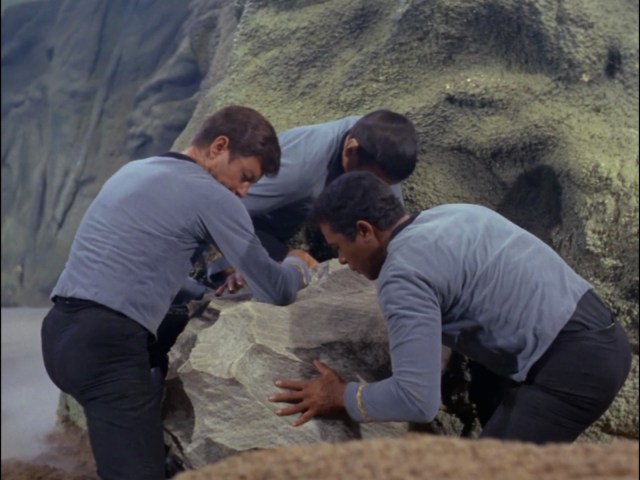 The most intense team building exercise that HR could think of.

Meanwhile, on the bridge, Ferris is counting down the seconds, telling Kirk that he needs to abandon the rescue mission. This guy is such a freaking asshole. He isn’t doing ANYTHING to help out, leaving Uhura, Sulu, and Kirk to desperately seek contact with the Galileo.

Their time has run out. The Enterprise turns to leave.

Everyone rushes back into the Galileo (which meets its weight requirement since two people died). Scotty activates their hacked energy source, and they blast off into orbit. But Spock’s worried that the Enterprise might have left already.

He and Bones have a catty exchange.

Spock: Gentlemen, by coming after me, you may well have destroyed what slim chance you had for survival. The logical thing for you to have done was to have left me behind.

Bones: Mister Spock, remind me to tell you that I’m sick and tired of your logic.

I’m with Bones on this one.

Kirk’s got a trick up his sleeve — he’s asked Sulu to fly away at “Space Normal” speed to their next destination. It’s a really time-consuming way to travel, especially if you’ve got warp speed. His Space Normal trick made me think of these kittens flying in slo-mo:

The Galileo is orbiting Makus III, but no one can see them. In a very illogical move, Spock presses a button to dump ALL their fuel out. 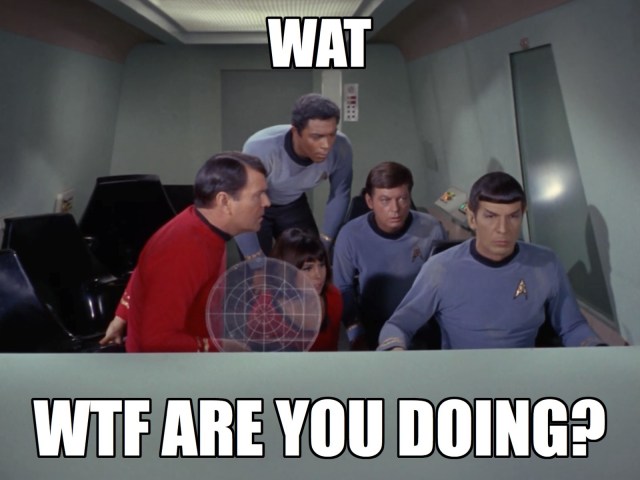 Everyone’s about to panic, but then Scotty realizes what’s going on: The ignited fuel will give a giant visual signal to the Enterprise – kinda like an enormous flare. 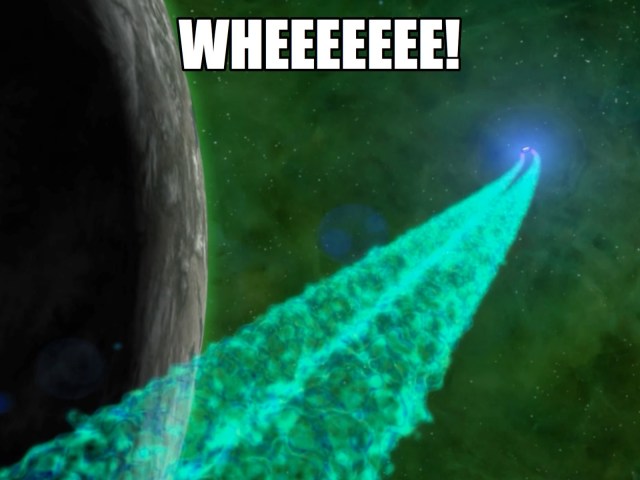 Unfortunately, their survival time has now dropped to SIX MINUTES, since their orbit will degrade and the Galileo will burn up in the planet’s atmosphere. Like this: 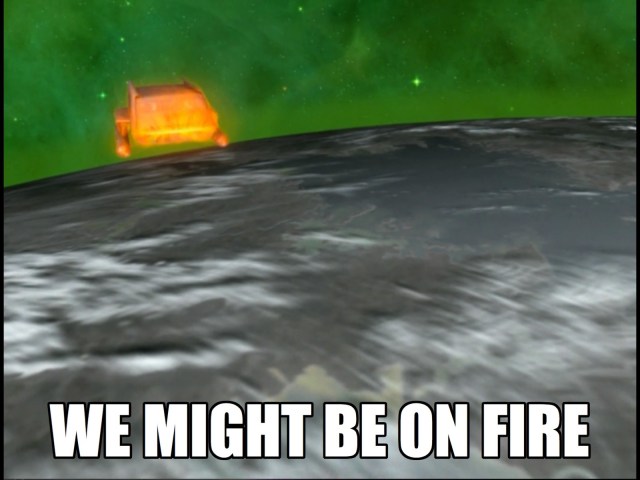 Time to get out your prayer beads and booze. This ship is going down!

Luckily, Sulu saw the giant fuel signal and the transporter room has locked onto the crew! They’re beamed aboard just before the Galileo turns into a pile of ash. 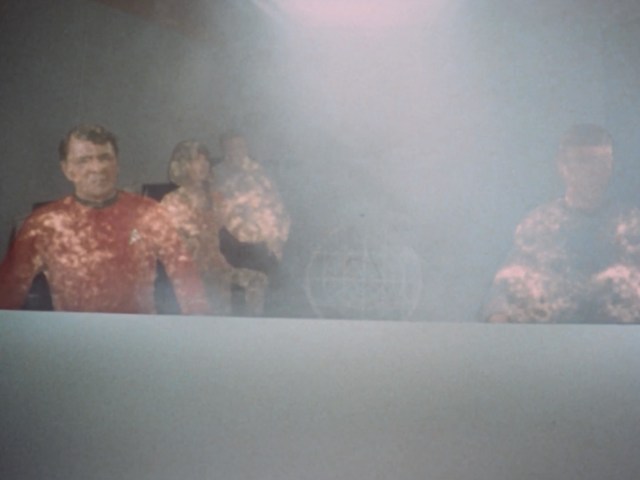 Talk about a last-minute!

Let’s all laugh at Spock. Again!

Remember how last episode, how everyone laughed at Spock? Well, they’re doing it again!

Kirk is thrilled to be reunited with his one true love. He insists that Spock performed an “act of desperation,” which is totally human. When Spock denies it, Kirk laughs, “You’re not going to admit that for the first time in your life, you committed a purely human emotional act?” 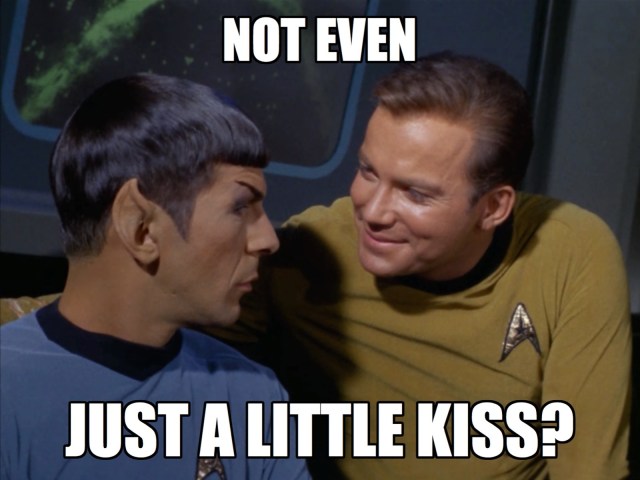 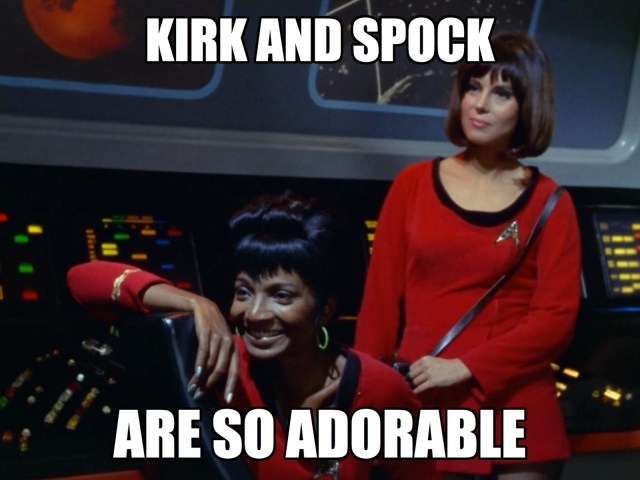 Uhura and Mears are gonna write fanfic about this later.

Spock refuses to admit that he’s got an emotional and human side. Cue Enterprise giggles. 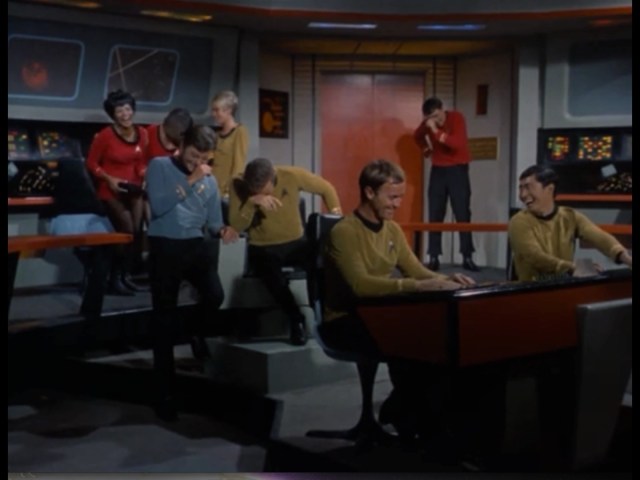 Can I just say again, I love episodes with Spock character development! He is the best ever.

Also fun fact: The shuttle prop for this episode fell apart and got all rusty in storage, but it was saved by the amazing Galileo Restoration team! They’re planning to display it in a museum once it’s totally finished. Check out their fantastic progress pics!.