This is seriously one of the most cracked-out Star Trek episodes I’ve covered so far. Therefore you should ABSOLUTELY watch along here or maybe bake this episode into brownies, IDK.

We open with Kirk batting his eyelashes at the new Yeoman, Tonia Barrows. He asks her to massage the “kink” in his back. Yeah huh. Spock is disgusted. 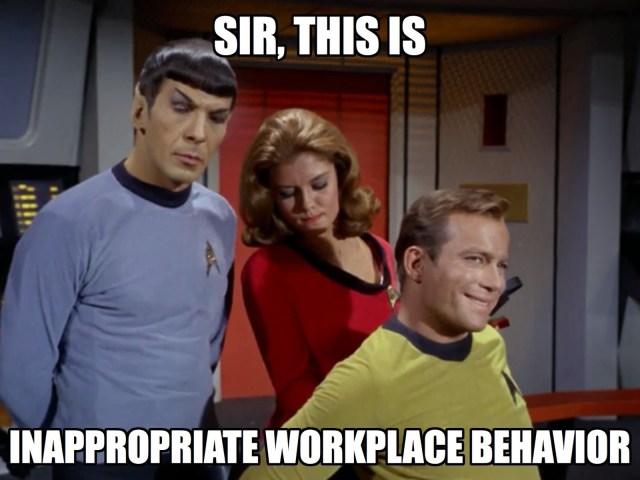 Spock mentions that Bones has recommended that everyone on board take a break with some well-deserved shore leave. “Myself excepted, of course,” says Spock, ever the proud Vulcan.

Sulu and Bones land beam down to a deserted jungle planet in the Omicron Delta region. Sulu frolics off to get his botany nerd on, since the plants look extremely similar to those found on Earth. “It’s like something out of Alice in Wonderland!” Bones marvels. Great timing, because a giant white rabbit being chased by a little girl go crashing through the bushes in front of Bones. 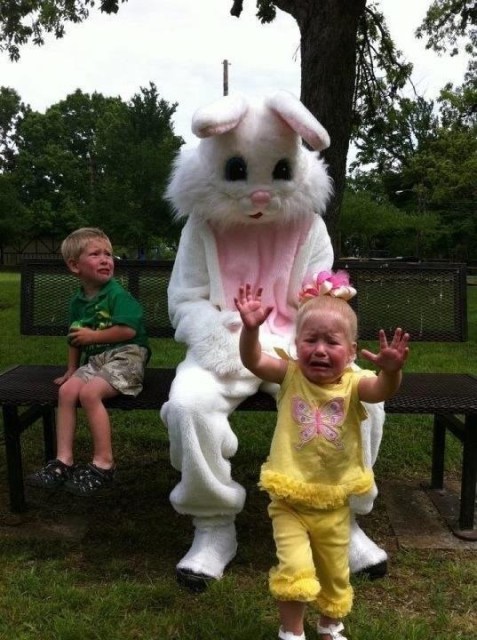 Bones is understandably freaked out, and he radios Kirk to let him know that he’s unfit for duty. Why? Because he just saw a man-sized bunny wander by like they’re at a furry convention. Kirk laughs, convinced that this is just a prank. He decides to beam down to the planet with Yeoman Barrows and check things out. 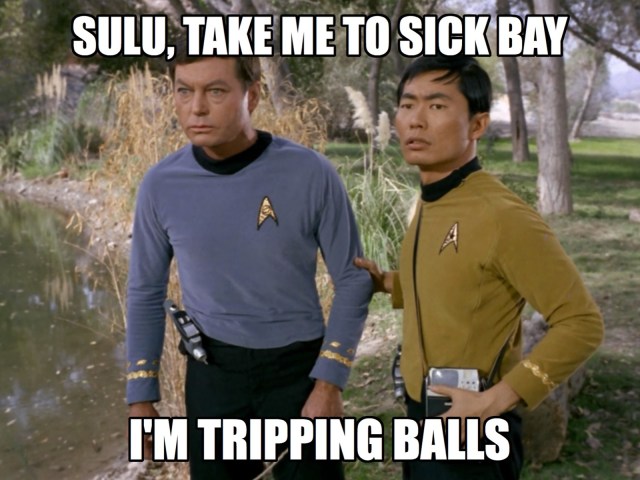 When Kirk arrives, he asks if Sulu witnessed the giant rabbit chase. Bones explains that Sulu was “examining the flora at the time.” Yeah. That’s gotta be a euphemism for something.

Cut to a scene where a rock magically lifts itself up and poops out a gun. Or lays it, like a hen lays an egg. I don’t know WHAT fairy tale that’s from! 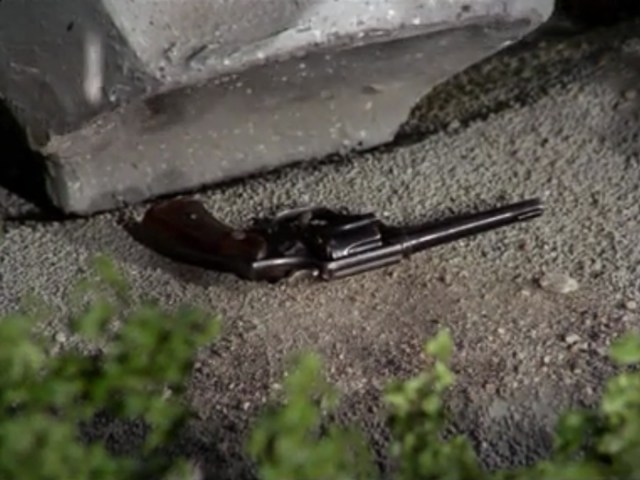 Meanwhile, two other crew members, Teller and Rodriguez, are scanning the plans so that they can deliver a report to Captain Kirk. I feel like we’re being lulled into a false sense of security—who knows what strange horrors will find them? Kirk orders the Enterprise to keep everyone on the ship until they investigate. 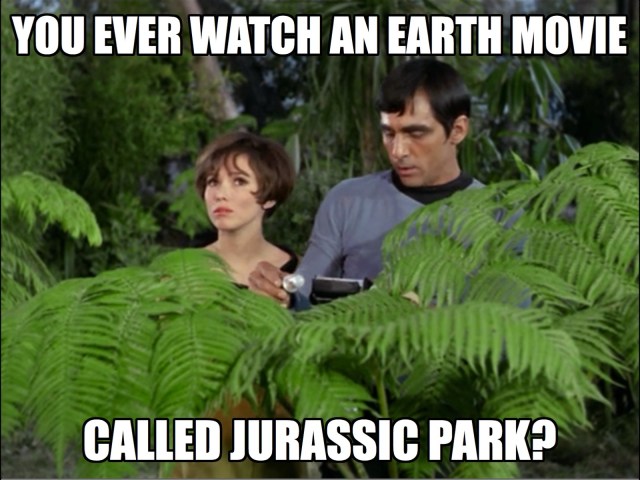 Looks like Bones wasn’t hallucinating after all. They find giant footprints, and Kirk uses his Star Scout skills to begin tracking the creature. 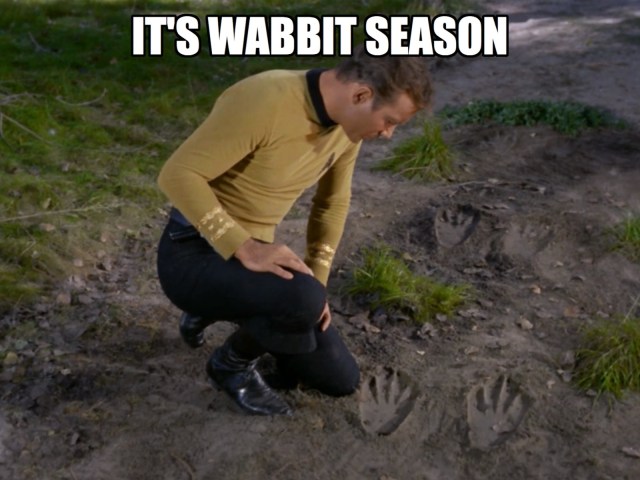 But they’re interrupted by gunshots!

Kirk, Bones and Barrows go running toward the gunshots with their phasers drawn. I wonder if anyone on the Enterprise has heard gunshots before—or if it’s something they learned about from TV? I mean, it seems like bullets would be obsolete tech, right?

They find Sulu grinning and shooting into the bushes. He does love his weapons — remember his obsession with bare-chested sword fighting? The captain demands to know where Sulu found the gun. 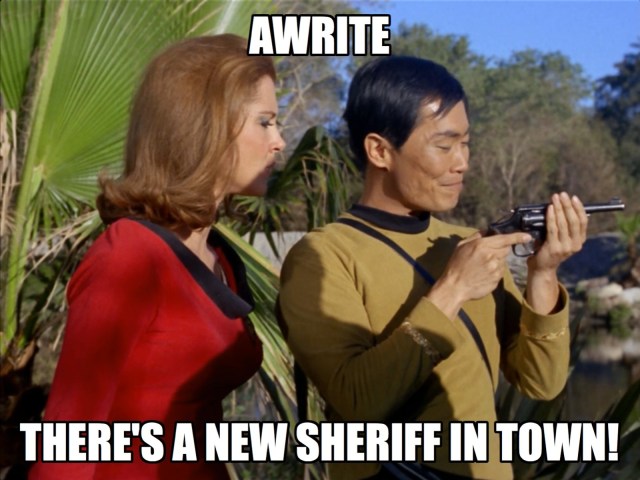 I swear, Captain! I just found it on the ground!

Sulu thinks it’s strange that he found this particular vintage gun model, since he’d just been thinking about it earlier. Hmmmmmm. Kirk orders Sulu to hand over the weapon, since he’s too “trigger happy” out here in the wild.

Kirk and Bones walk back toward the rabbit tracks. Since Bones got teased by the crew for his alleged hallucinations, Kirk tries to make him feel better by reminiscing on his old Academy days. Kirk describes himself as “serious” and “grim.” It’s really hard to imagine this. For some reason, I keep picturing Kirk as a frat bro, but maybe that’s unfair.

Kirk describes how a little shit named Finnegan used to pick on him all the time. Kirk sounds wistful, like he wishes that he could have done something different. If you’ve caught onto the common theme of this episode then you probably won’t be surprised: whenever you wish for something on this planet, it becomes reality. Be careful what you wish for! 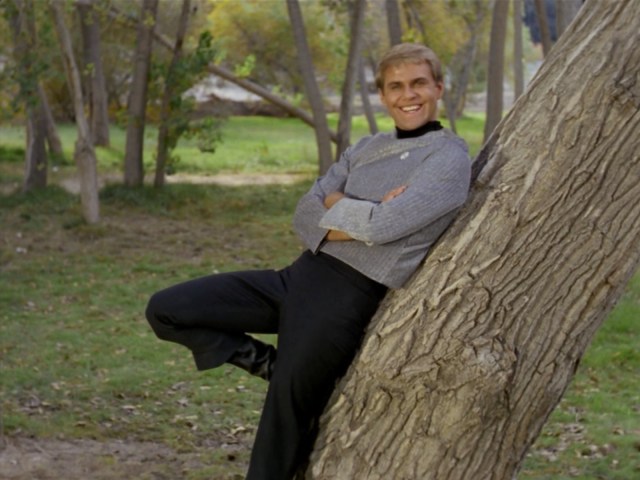 When you wish upon a star… yeah. This is the bully from Kirk’s past. Doesn’t he look so punchable?

Finnegan appears and clocks Kirk in the face. Before he can do anything about it, they hear Yeoman Barrows screaming bloody murder.

Kirk and Bones rush to help her, and Barrows is crying with her shirt torn. She explains that a man with a cloak and a jeweled dagger attacked her. Instead of taking her seriously, Kirk questions her credibility, asking, “Are you sure you’re not imagining all of this?” Really dude? 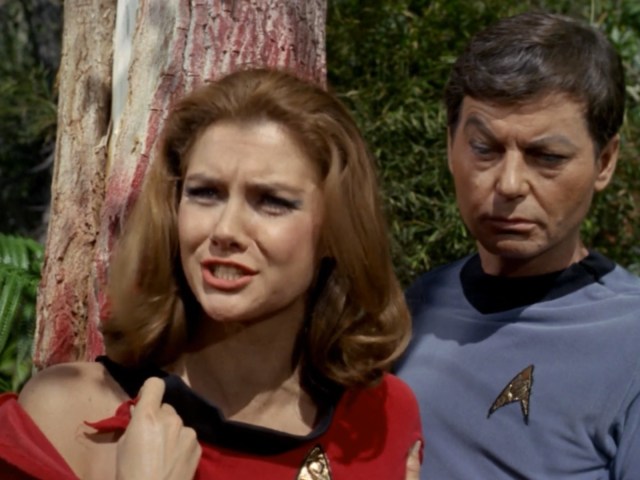 The crew realizes that their wishes and daydreams are coming to life, since Barrows had been thinking about Don Juan just a few seconds earlier. I’m not sure if they’re trying to imply that Barrows was secretly dreaming about an assault, but this scene creeped me out. Ugh.

The crew realizes that they haven’t seen Sulu for a really long time. Who knows what kind of trouble he’s in! Kirk runs off to find him.

Meanwhile, this cheap looking antenna pops out of the ground. 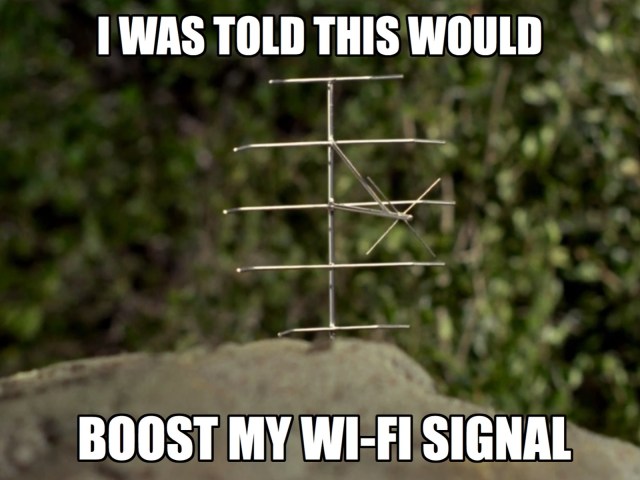 But Kirk runs into a ghost from his past — a woman named Ruth, who seems like she was an old fling. They rub their faces against each other. 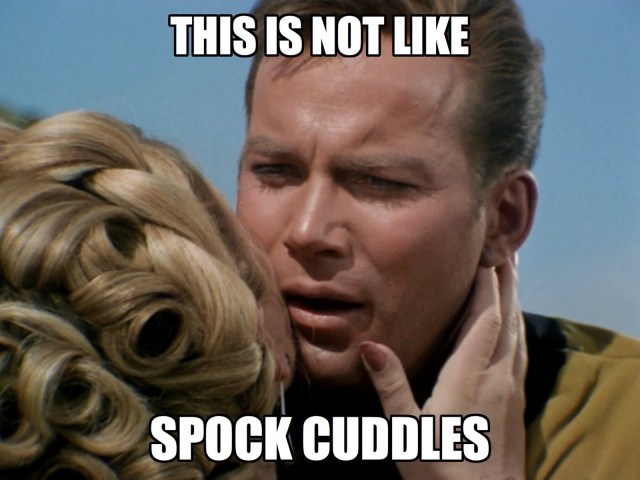 The Enterprise calls Kirk on his communicator, reporting that an immense power field is emanating from the planet’s underground, affecting their communications with the landing party. Uh oh!

Teller and Rodriguez hear some weird noises in the bushes, and I’m not sure who’s dreaming about tigers, but here it is! 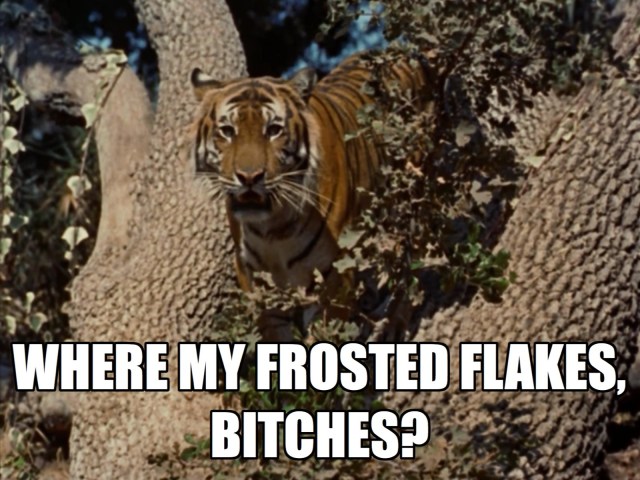 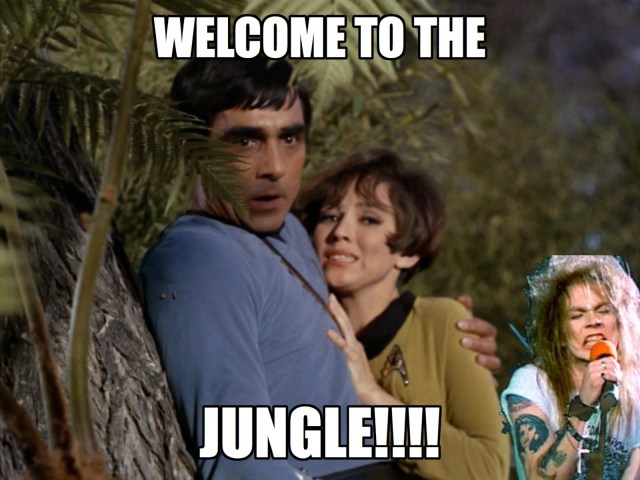 This trippy episode just keeps getting weirder, as people’s fantasies manifest themselves!

Bones and Yeoman Barrows have become really chummy, and Barrows daydreams about new clothes. In fact, she thinks that “A girl should be dressed like a fairy.” I can’t say this would be my own gendered fantasy. I’d want some kick-ass survival tools and maybe some breathable armor to protect me against mosquitos. But hey, to each their own!

And tadah, look what the cosplay fairies drop off for Barrows! 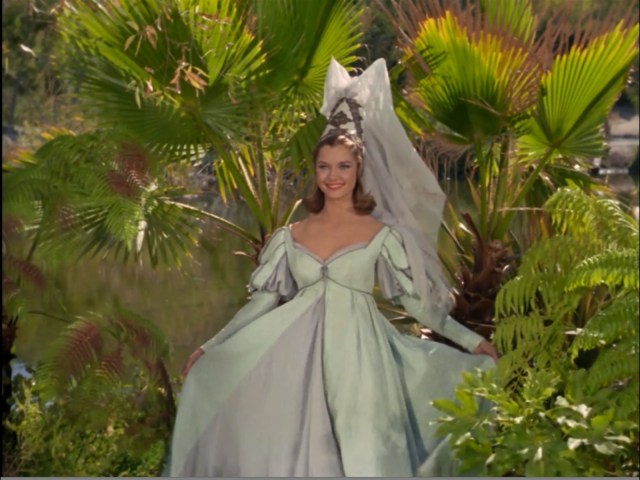 Wow, this same-day shipping really came through for us!

Barrows goes on to describe herself as “A lady to be PROTECTED and FOUGHT for!” Really? Great way to perpetuate destructive stereotypes. And Bones, thinking with his bone, replies “You are all of those things.”

Meanwhile, Sulu’s being chased by a samurai that just popped out from a trap door on the ground. 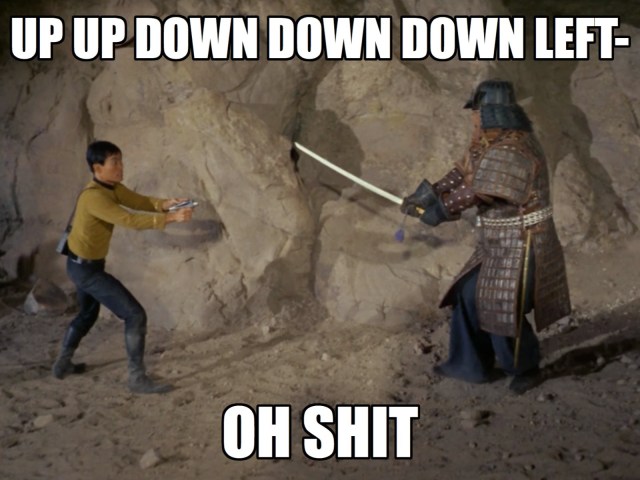 This is probably a bad time for Sulu to realize that his phaser is broken.

Sulu runs into Kirk, and they run away to meet the rest of the landing crew at their start point, near the bunny rabbit tracks. 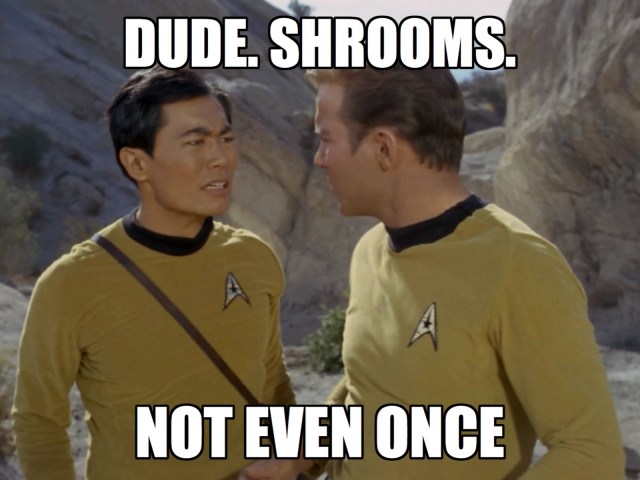 Sulu is SO over this planet.

They get one last call from the Enterprise from Spock, who says that the subterranean power source is draining the phasers and breaking up communications. Spock beams down, and barely makes it before the transporter gets blocked. Now they’re all trapped!

But hey, maybe we’ll get to see what Spock wishes for!

Bones and the Yeoman are still doing their freaky cosplay thing, and they’re getting pretty cuddly. Bones imagines that he’s the Yeoman’s knight in shining armor. Well, that’s great because here comes an Actual Knight in Actual Jousting Gear! 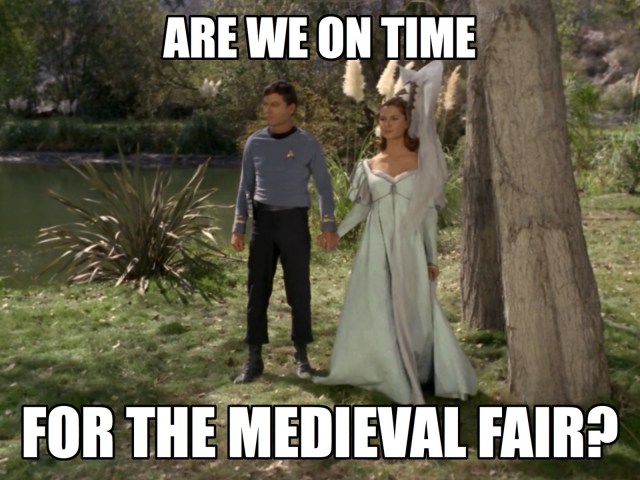 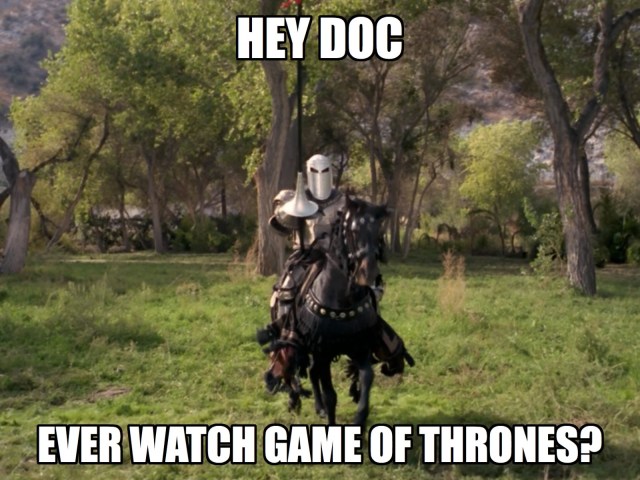 Bones announces that “Hallucinations can’t harm us!” standing in the way of the charging horse. Too bad, because he gets lanced right in the chest. Bones falls over. Dead. Yes. You read that right. Bones is FREAKING DEAD!

Kirk shoots the knight down with the old-school pistol, and they run toward Bones in shock.

Yeoman Barrows is losing her shit and screaming. Kirk snaps her out of it, explaining “Yeoman. We’re in trouble. I need every crewman alert and thinking.” Yup. This is some serious shit they’re in. I don’t know what I’m gonna do without Bones! Bones drinking! Bones derping around in Sick Bay! Bones disagreeing with Jim!

Sulu examines the fallen knight and realizes that the armor just contains a creepy, inanimate doll. And then some airplanes fly overhead distracting the crew from the Doc’s body, which is stolen by forces unknown. Someone please explain, WTF is going on?! 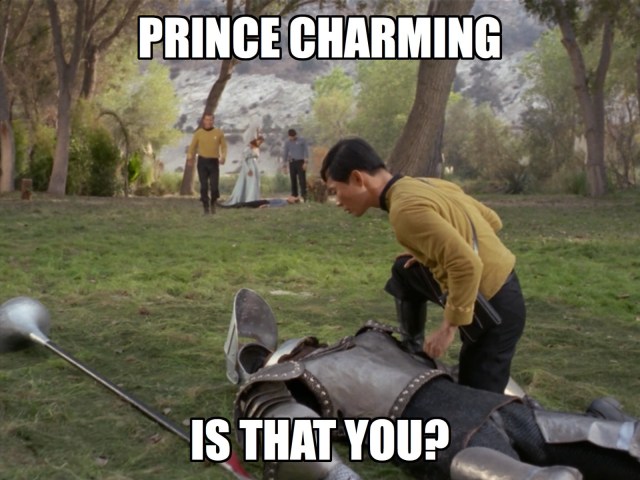 Finnegan, Kirk’s old nemesis from school, appears and taunts the Captain. Kirk runs off to get revenge, leaving Spock to stand there and scratch his head at all these irrational humans. 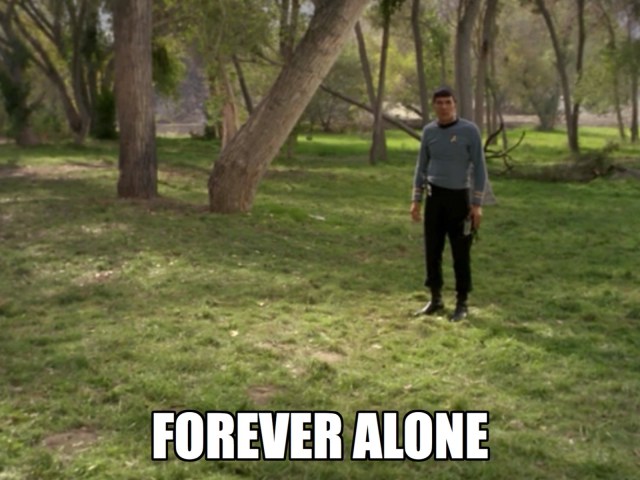 A Vacation of Freaky Fantasies

The Captain has done lost his mind. He and Finnegan beat the shit out of each other. 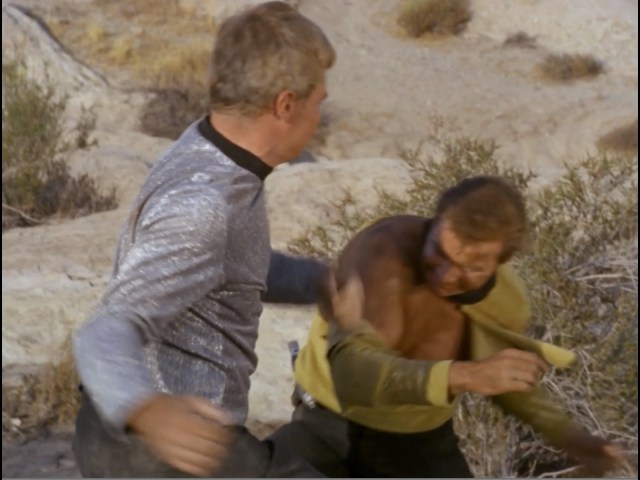 Kirk’s got this weird look of maniacal glee on his face the whole time. 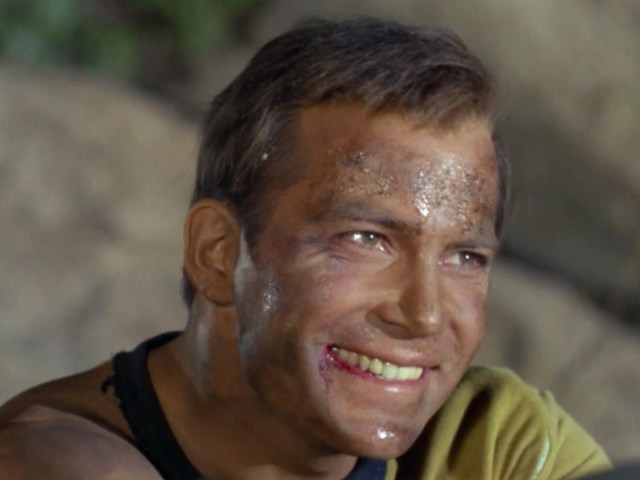 Once Kirk knocks Finnegan out, Spock asks him, “Did you enjoy it, Captain?” Kirk replies yes, that he’s always wanted to beat the crap out of Finnegan. There’s gotta be a better way to work through these anger issues. 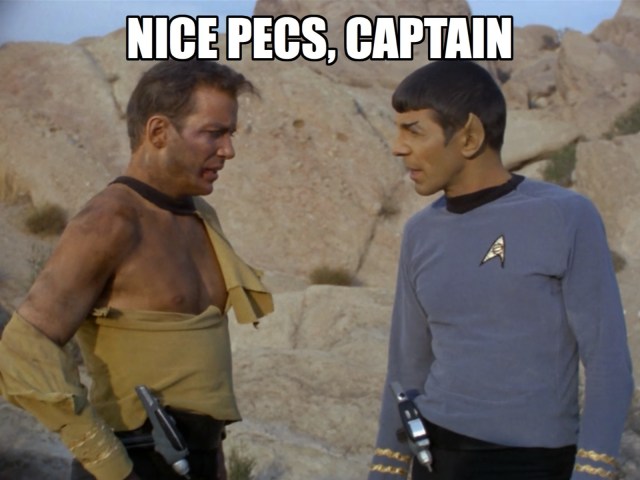 Remember those airplanes from earlier? Well they start shooting at Kirk and Spock, and they grab at each other and run for cover. 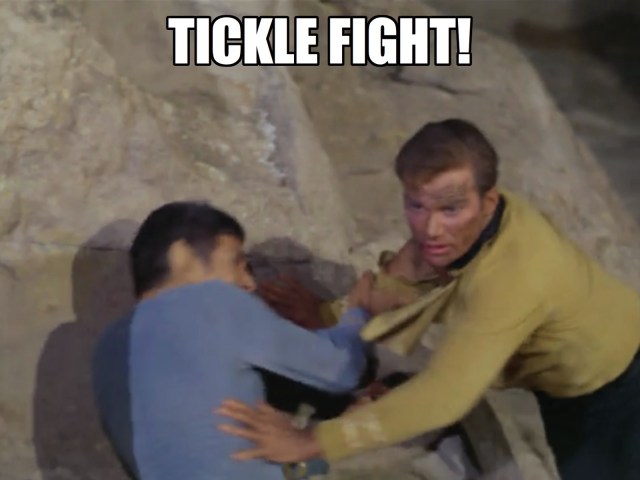 An Open Invite to the Planet of Wishes

The landing party regroups, and a mysterious Caretaker appears. He explains that the planet is meant to be an “amusement park” for beings of higher intellect. Bringing their wishes and desires for sex, battle, and adventure to life. When Kirk asks where the Caretaker is from, he explains: “My impression is that your race is not yet ready to understand us, Captain.” 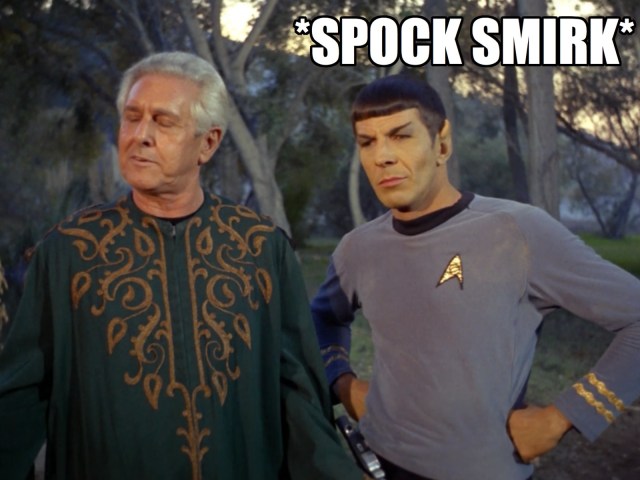 Yes, you humans would never understand.

Since this is all meant for pleasure, and none of it is real, that means that Bones isn’t really dead! He appears with a bunch of go-go dancers clinging to his arms, and the Yeoman gets uber jealous. 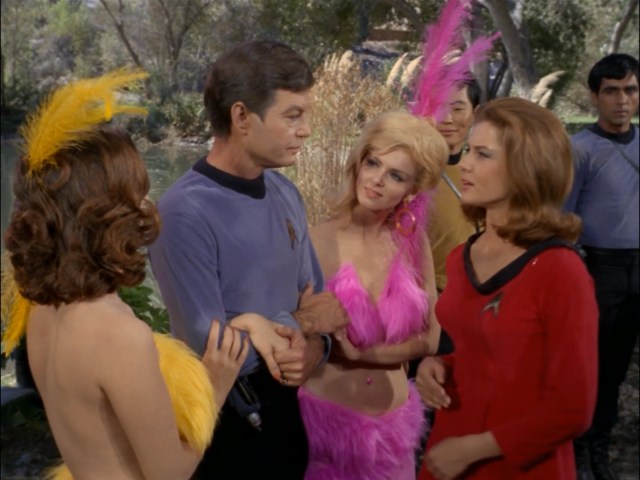 Bones: Well, you got your fancy threads. And I went to Vegas!

Kirk makes the really fuckin’ weird decision to INVITE EVERYONE down to the planet. Seriously Captain? Let’s recap all of the horrible stuff that happened to just your small landing party:

Ruth appears once again, and Kirk is entranced. He wanders off into the forest to go uhhhhh enjoy his vacation / get laid. 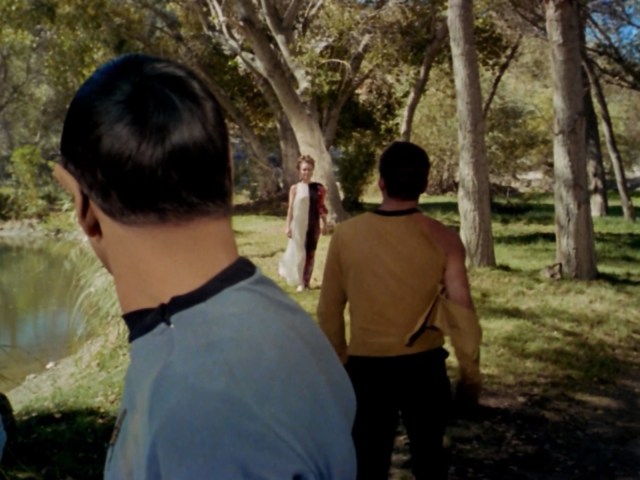 After the vacation is over, everyone returns to the Enterprise laughing and relaxed. I’m pretty sure everyone, except Spock, got their freak on like some sailors on, well, shore leave. 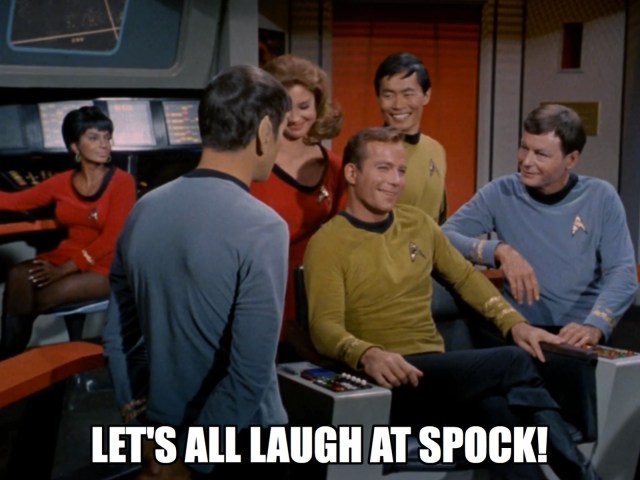 Spock looks on at the laughing crew, and simply says, “Most illogical.”

Before you go! It takes funding to keep this publication by and for queer women and trans people of all genders running every day. And A+ members keep the majority of our site free for everyone. Still, 99.9% of our readers are not members. A+ membership starts at just $4/month. If you're able to, will you join A+ and keep Autostraddle here and working for everyone?
Join A+
Related:Nerd CultureregularStar Trek N00b