It seems that a bunch of you are into linguistics. That’s cool. I like that about you. And if not, you at least like reading words because…well, here you are. Reading these words. Something special, words are. They tell you a lot about people. Sometimes they tell you a lot about people you don’t even want to know things about. Like the cute girl you just met’s string of horrible exes. But you can’t be mad at words. They were just doing their job and as it turns out, it may be the words you barely pay attention to that can predict whether you and the cute girl with the unfortunate string of exes will make the cutest couple that you ever did see.

A study by Alex Pennebaker and Molly Ireland developed a metric they call Language Style Matching. “Function words” (a, I, you, me, for, of, on, but, and, etc.) are often mimicked between two conversing parties. When two people use a similar level of personal pronouns, articles, and prepositions, it’s more likely that they will have romantic interest in each other.

In the first study, pairs of college students had four-minute speed dates while their conversations were recorded. Almost every pair covered the same topics: What’s your major? Where are you from? How do you like college? Every conversation sounded more or less the same to the naked ear, but text analysis revealed stark differences in language synchrony. The pairs whose language style matching scores were above average were almost four times as likely to want future contact as pairs whose speaking styles were out of sync.

A second study also revealed a pattern in electronic communication. 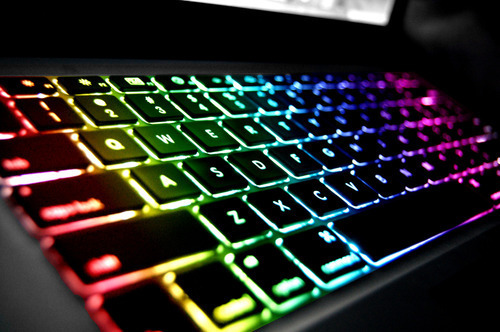 If it's a match, maybe this will happen to your keyboard.

Intrigued? There’s an online Language Style Matching application that you can use to assess the compatibility between two parties. I wouldn’t suggest using it to make any decisions about whether you should stick it out with your significant other but it couldn’t hurt. Maybe you should read the book before you rely on the information that heavily. For those unattached, think of all the ways you can use this metric to zero in on which of your many options (you’re such a ladykiller!) you should pursue. Got an online crush? Run it through the app! Chatting with a girl on ASS chat? Start copy and pasting! Think your TA is super hot? Plug in something they’ve written with your last reading response! Sure, Autostraddlers give great advice, but every now and then you need someone to encourage you to be a creepstar because you never know when it’s going to pay off.