Tensions are rising between Occupy protesters and labor unions in Washington, DC. An article in last Thursday’s Examiner reports that Occupy DC will not be lending support to a five-day “Take Back the Capitol” protest put on by labor unions, despite unions’ support of Occupy since October. 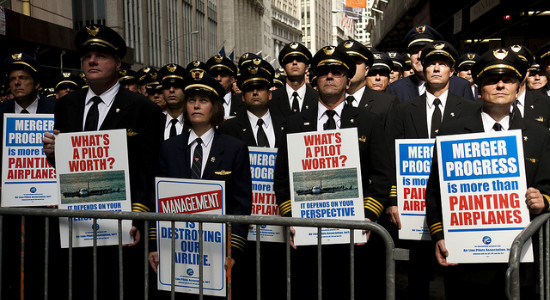 The reasoning behind the stance may have some clout to it — in the reality of the political spectrum, Republicans and Democrats are practically two wings of the same party, therefore, supporting the ideals of the Democratic Party implicitly means supporting the pay-for-play government structure that Occupy is opposing. But some of the statements released regarding the action (or lack of action) err on the side of hypocritical, juvenile and downright irresponsible, hinting toward butt-hurt ego politics and using accusatory language:

“‘They’re undermining the whole point. We want to take power and give it to the people, not unions,'” said McPherson protester Benjamin Faure. ‘If a union can win over everyone at the square, go ahead and let them try.'”

This is pretty nonsensical, if not at least a little offensive. The labor movement has historically been a movement of and for the people. Unions have fought for living wages, reasonable work weeks, benefits for workers, and preservation of dignity for everyone. Valuing work without without unions can be a slippery slope into the waters of the bootstraps narrative, one which leads us to believe that every one of us is given an equal opportunity to succeed, if only we were willing to work hard enough. 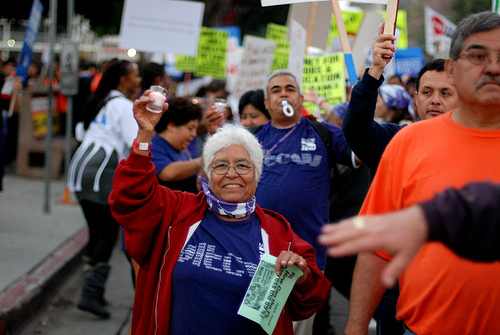 In late September and early October, major labor unions marched with Wall Street occupiers, and it was like a sprouting movement had put down its roots. Maybe the unions can’t “win over everyone at the square,” but securing dignity and safety for individuals doesn’t always take place in the spotlight.

The action was a huge statement of solidarity, and it made a big statement for the occupiers: Take us the fuck seriously. Our message has power and history and validation. We are not speaking out of turn, we are speaking out. On November 30, Occupy DC released its Official Declaration, the list of grievances which includes:

“Those with power have divided us from working in solidarity by perpetuating historical prejudices and discrimination based on perceived race, religion, immigrant or indigenous status, income, age, gender, gender identity, sexual orientation, and disability, among other things. These divisions have inhibited our ability to work in solidarity, though today we recognize the power of uniting as the 99 percent.”

Taking that into account, this break feels like a loss, because occupiers and labor organizers can learn so much from each other. Labor unions may advocate for a different means to an end, but ultimately the end is the same, and so is much of the problem. Occupiers fight corporate culture and challenge its face; labor unions protect those who stand to be exploited by it. Worker training programs at corporations like Target are notorious for anti-union propaganda. Conservatives portray unions as exploitative of people of color. Corporations make structured attempts to divide workers and keep them powerless. Unions and occupiers know that power lies in numbers. It seems contradictory to build a movement that is intentionally pervasive and then accuse pre-existing movements of co-option when they continue to do their work. Intersectionality exists, movements overlap.Where is the line into co-opting drawn, and who gets to draw it? And although this may not be the intent of DC Occupiers, the message that we’re hearing is that calling a movement out on being non-inclusive to women and people of color is divisive, but rejecting factional support preserves integrity. What was supposed to be a solidified, widespread movement has now become a dictation of who is and who isn’t allowed to be in the 99 Percent. 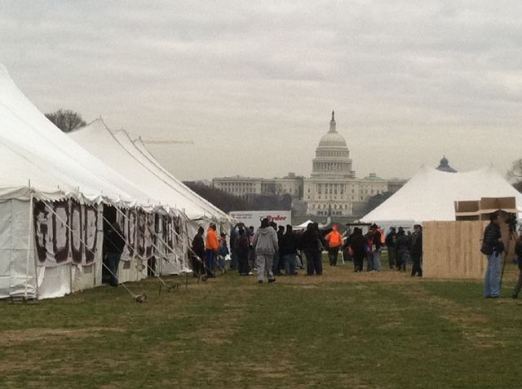 But what would worlds look like where both occupiers and labor rights organizations each saw their visions come true? Probably pretty similar. A world where all people have respect and dignity, regardless of race, class or gender, where we don’t have to be dependent on corporations for jobs or resources. That’s a shift in power. And it has to start somewhere. The workforce is vast and diverse, and respecting workers is something that can be truly revolutionary. What happens when a housekeeper is well-compensated for hard work, long hours and physically exhausting labor? What happens when an undocumented kitchen worker doesn’t have to fear speaking out against an employer’s abuses for fear of deportation? What happens when a server can defend themselves against verbal abuse by customers without fear of losing their job?