Honestly, I couldn’t have asked for a better title or description. The instant that I saw this Netflix description, I knew this was gonna be good. 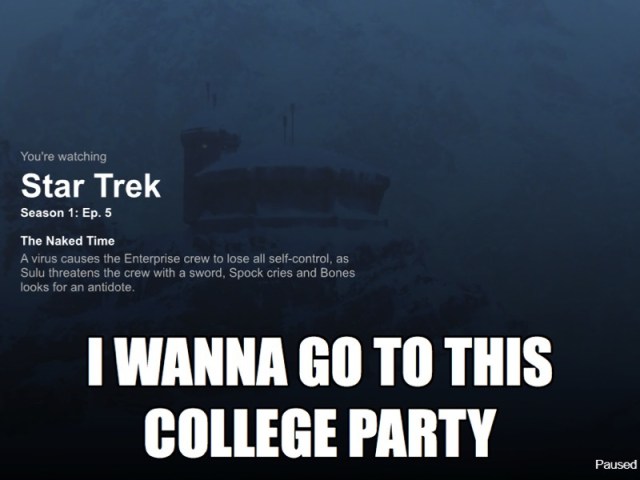 THE NAKED TIME when Sulu chases men with his sword. And Kirk and Spock slap each other over love. It’s ALL canon, people. Awwwwriiiiite!

The title also made me think of this weird Harry Potter meme.

As always, you can watch along here. Ready? Ready!

We jump right into a scene with Spock and Lt. Junior Joe Tormolen who are exploring a frozen popsicle of a world known as Psi 2000, a planet about to die. They’re here to check up on a team that’s researching the planet’s surface before its destruction.

Spock and Joey are rocking some glitter-fabulous hazmat suits, and exploring a derelict laboratory. Seriously, WHO designed these costumes? Those golden circle things can’t have been easy, and just look at those padded shoulders! There are no survivors—everyone’s keeled over and frozen at computer stations and even in the shower. 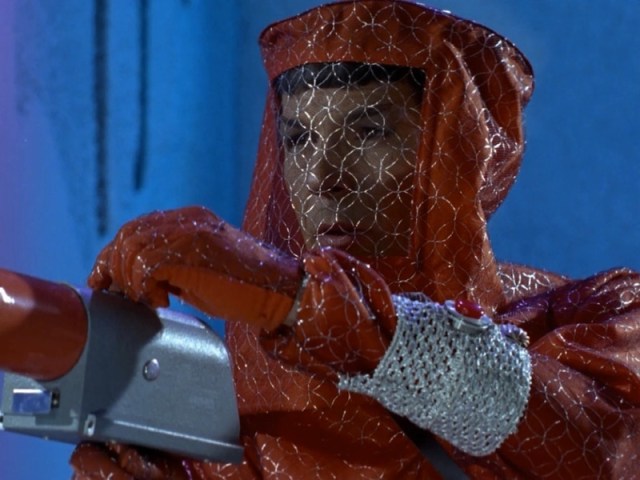 My hazmat suit was designed by Jovani, bitches.

Spock and Joey split up to explore the lab. Joey comes across a guy frozen over a computer station, and he started looking for some clues. Like the brilliant scientist he is, Joey REMOVES his hazmat glove to wipe at his nose. Then he plants his hand against the wall to examine something. His doesn’t notice the really conspicuous bloodstain on the wall. 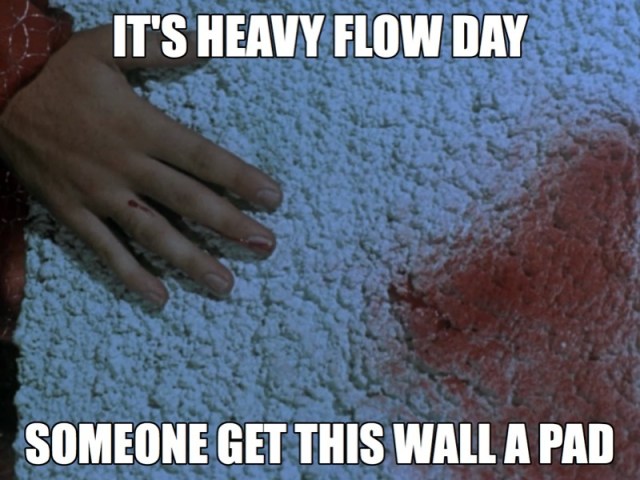 Or a Diva Cup!

The blood on the wall seeps upward, defies gravity, and jumps onto his fingers. Then what does Joey do? He scratches and wipes at his nose! 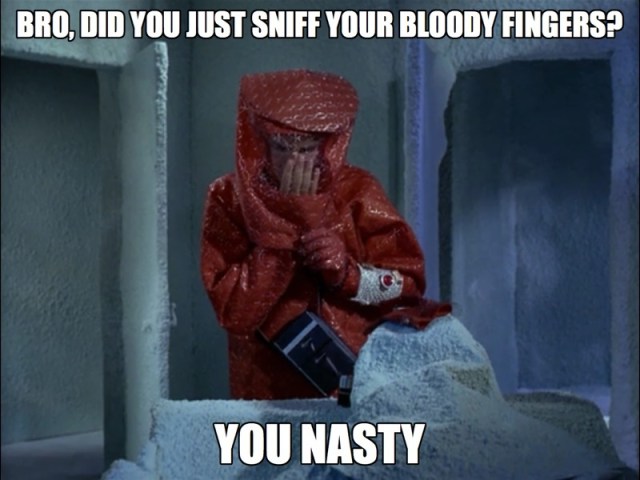 This is how you catch things. Wear finger condoms.

Ewwww. If there’s ever a zombie apocalypse, I don’t want Joey to be on my team.

Joey puts his glove back on, and Spock walks by, casually mentioning how important it is to avoid contamination. Hear that Joey? You’ve ruined everything, and you don’t even know it!

They beam up to the Enterprise and inform Captain Kirk that everyone in the laboratory has died from unknown causes. Spock and Joey are ordered to stand still in the transporter, as they go through a decontamination process. The special effects are brilliant—it’s just some colorful lights that flash slowly. 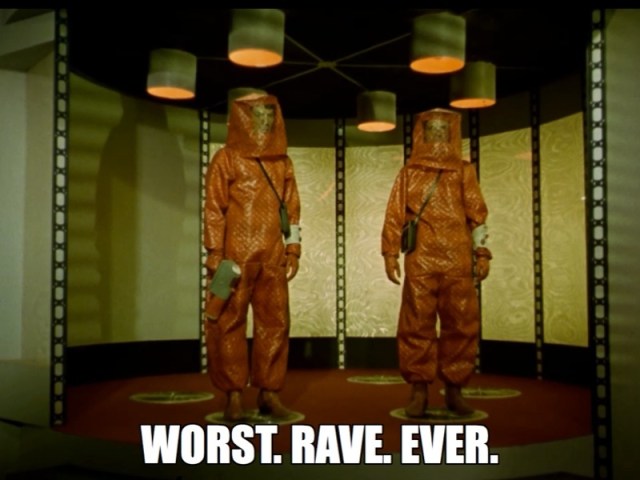 Both crew members are sent down to the sick bay for closer observation. Bones and Kirk make fun of Spock’s vital signs. Apparently his half-Vulcan heart beats much faster than a human’s. 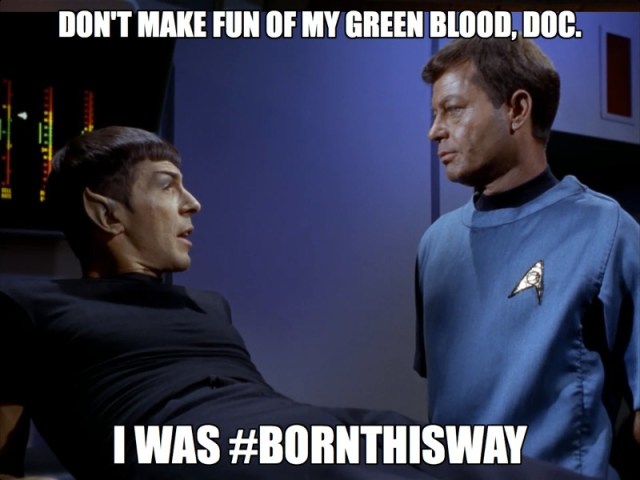 While everyone’s scans are A-OK, Joey seems to be struggling with some shell shock after his visit to Psy 2K. He’s clutching his head and rambling about how terrifying space exploration is, with “six people dead” on the planet. Yup, I’m with you homie. The vastness of space is pree-ty creepy. And to make matters worse, we know that you have some kind of doom plague.

Kirk and Spock retire to a meeting with the department heads. Kirk expresses concern about the limitations of their medical technology. What if it’s not able to detect all threats? Wait, so my iPhone won’t alert me when I catch the plague?

The cameras zap us to the cafeteria, where people stick food cards into large, clunky machines called “food synthesizers.” In a couple of seconds, a dish magically appears. 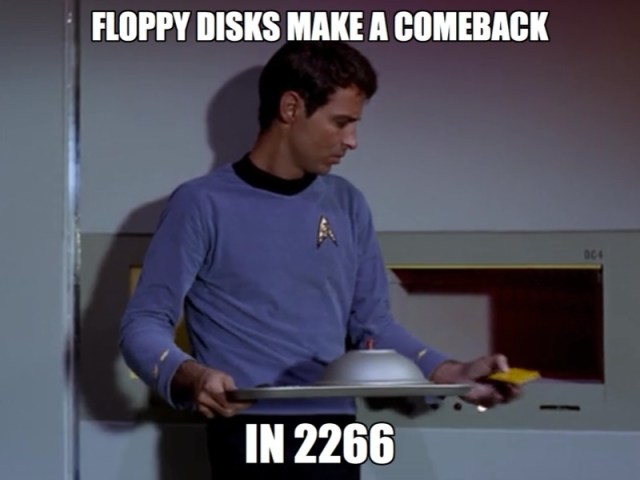 Sulu (cue fangirl scream) and Lt. Riley enter the cafeteria. They’re having a serious discussion about swords. No kidding. And Sulu seems to be enamored with the rapier, a thin sword. He tells Lt. Riley that sword play (wink wink) “Tones the muscles, sharpens the eye, and improves the posture.” Oh rly? 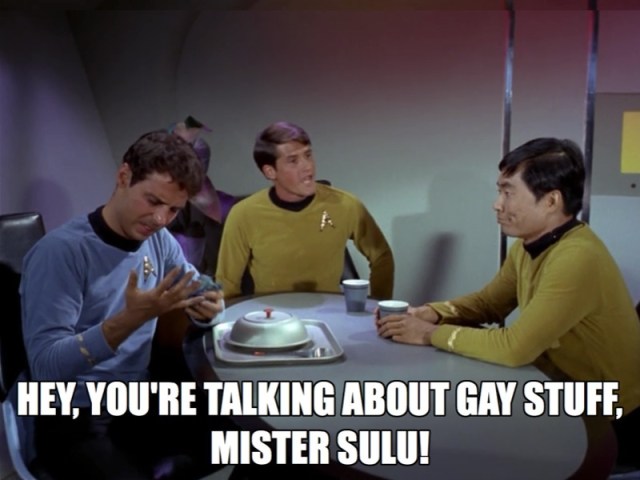 Joey sits at their table and can’t seem to leave his hand alone. Maybe because it’s infected with itchy plague. He starts having another panic attack, yelling “What are we doing here in space? We’re polluting it! Destroying it!” 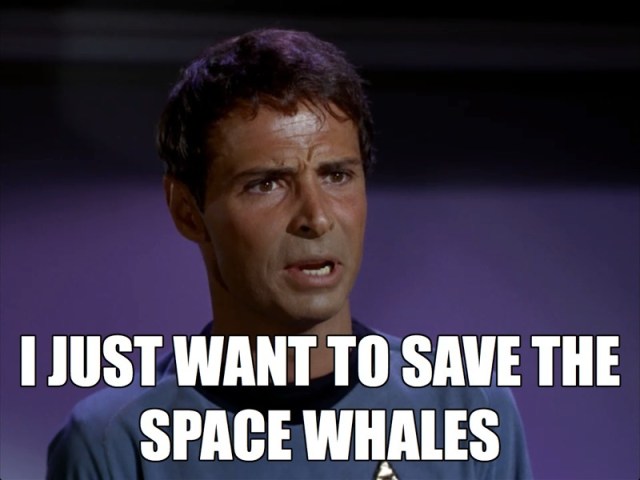 Things escalate quickly, once Joey decides that he doesn’t deserve to live anymore. Sulu tries to calm him down, but Joey has grabbed a butter knife off the table, and is directing it at himself. Sulu and Riley try to restrain Joey, and they wind up on the floor. And Joey somehow manages to fall on his butter knife. 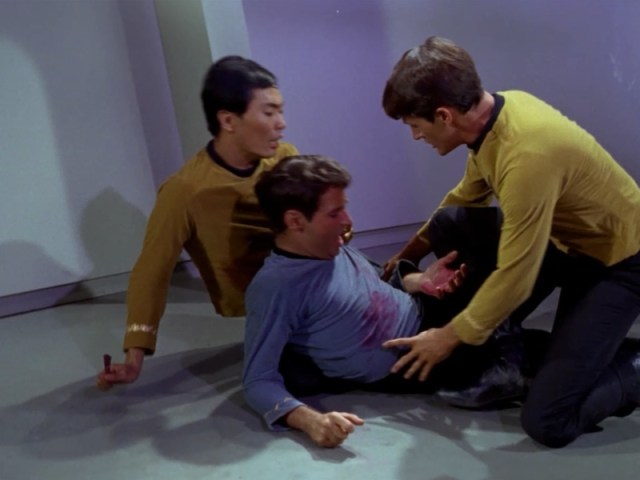 Riley calls for emergency medical help, and Joey Butterfingers is rushed off to sick bay. Kirk and Spock deliberate on the bridge, trying to figure out why Joey’s self-doubt and fear of space grew so intense.

Behind them, Riley and Spock begin to sweat and wipe their hands against their clothing. I wish this was just nervousness about an upcoming first gay encounter. But alas, it looks like Joey’s blood infected them. :( 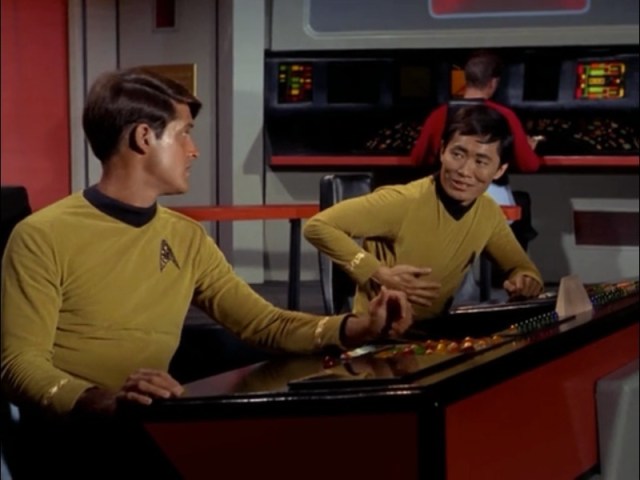 DEAR COSMO: I have weird sensations in my hands and fingers. Symptom of space plague or weird STD?

Meanwhile, Bones and Nurse Chapel struggle to save Joey Butterfingers from his non-lethal abdominal stabbing. Despite all their hard work, Joey’s vital signs drop to zero. Bones has zero explanation for the man’s death, and claims that Joey must have just given up and lost the will to live. Really, doc? With all that science, you think Butterfingers just willed himself to death?

Things are getting frantic on the bridge. The Enterprise is still orbiting Psi 2K, which is collapsing in on itself. The increased gravity is starting to draw in the starship. But no one is paying attention, because they’re too busy watching the amazing display of gay between Sulu and Riley.

“I’m sweating like a bridegroom,” Sulu moans. He then suggests that they both ditch work and head to the gym, because it’ll take some of the edge off (of the crazy sexual tension). 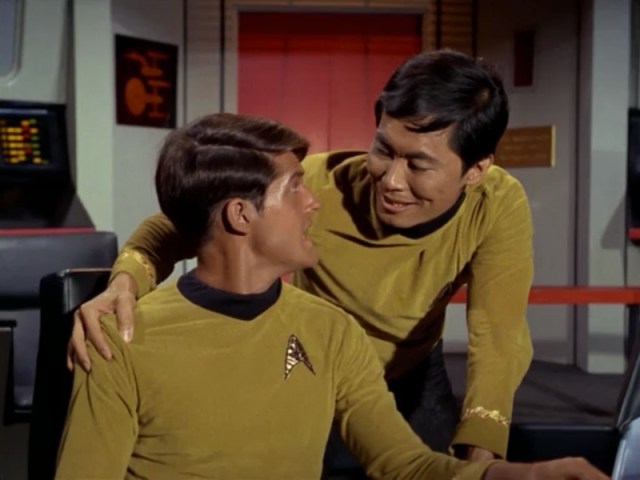 Kirk and Bones argue about Joey’s death in the sick bay. The captain believes it’s got something to do with the planet self-destructing below them. How? Well, the captain’s not sure yet. But it totally is.

We’re not sure how Psy fits into the equation either.

Spock rushes over to the controls, once he realizes that Sulu is gone. Riley starts going off his rocker, declaring his Irish heritage and singing drinking songs in this loud, annoying voice. 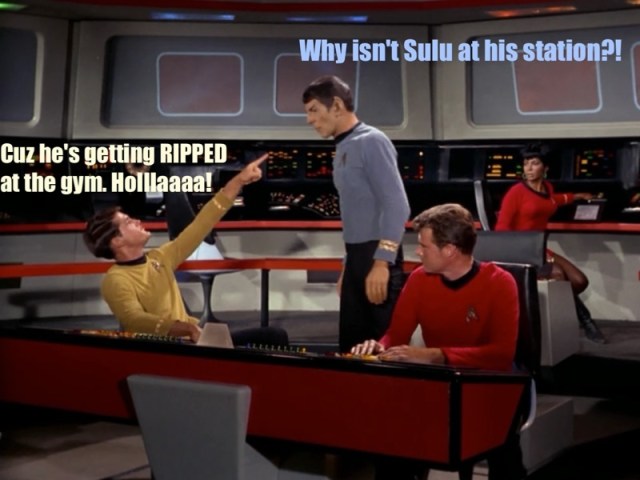 Spock tells Uhura to take over Riley’s station, then orders the Irishman to sick bay. Before he leaves, Riley yells “Now that’s what I like to see! Let the women work too! Universal suffrage!” Aaaaall right buddy, time to get you to the drunk tank.

Once he’s in sick bay, Riley starts to mack on Nurse Chapel, and of course, he gives her space plague. He says the oddest things, like “You know what Joe’s mistake was? He wasn’t born an Irishman.” Ya know, people are coming out with some really shoddy theories about Joey Butterfingers’ death.

But I instantly forgot these plot issues because Sulu jumps on screen topless with a freaking sword!

Sulu really knows how to have fun, even when he’s got space plague. He giggles and jumps through the halls, shaking his sword at anyone who gets in his way. Sulu makes his way onto the bridge, where he flashes and muscles and sword at Kirk and Spock. He grabs Uhura, exclaiming “I’ll protect you, fair maiden!” She manages to reply with, “Sorry, neither!” (which was allegedly an unscripted ad lib!) as she struggles to escape. Spock and Kirk manage to disarm Sulu, knock him unconscious, and get him to sick bay. 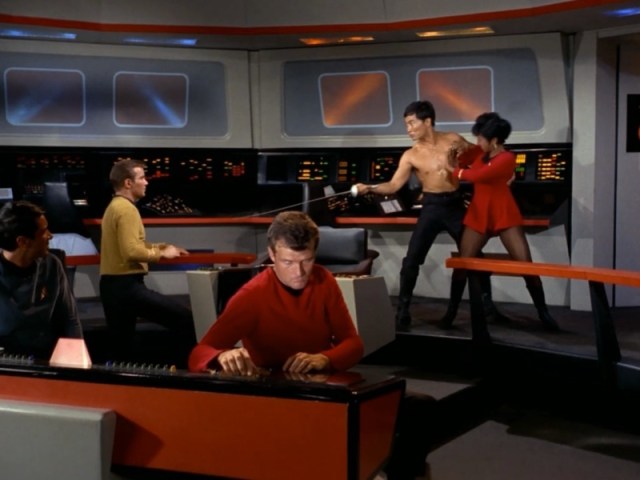 Uhura: I’m not into Three Musketeers LARPing, my dear.

In the meantime, Riley’s locked himself in Engineering, switching off the power and the engines. He’s taken over the main intercom with some really shitty karaoke. Kirk can’t get a word in, because Riley keeps screaming out orders for ice cream. Meanwhile the ship is being pulled down by Psi’s gravity.

Engineering Lt. Commander Scott tries to hack into the door controls with a laser, so he can make Riley STFU. Or maybe override the intercom with the Spotify app. 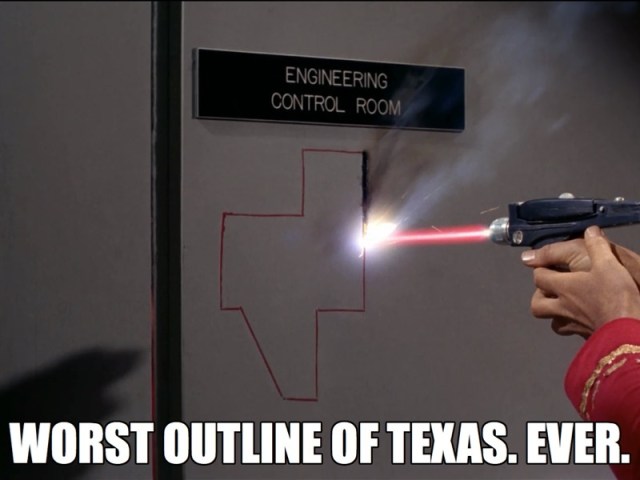 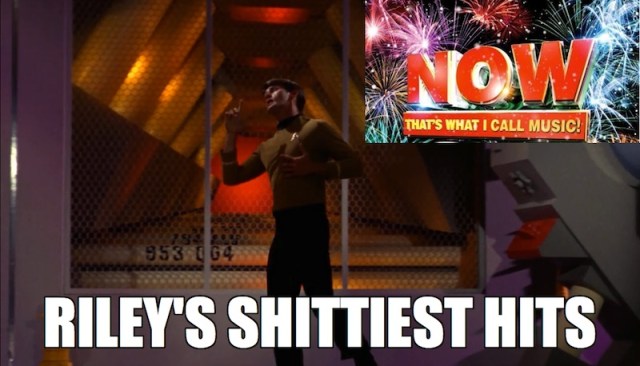 Things get ultra weird when Nurse Chapel infects Spock with Space Plague and confesses her love for him. He doesn’t reciprocate, and instead blurts out, “I’m sorry!” before running away.

Spock is overwhelmed with emotions, and stumbles around the Enterprise, clutching his head like Eric Draven in The Crow. He tries to reassert control over his feelings by blurting out math problems. It doesn’t really help. 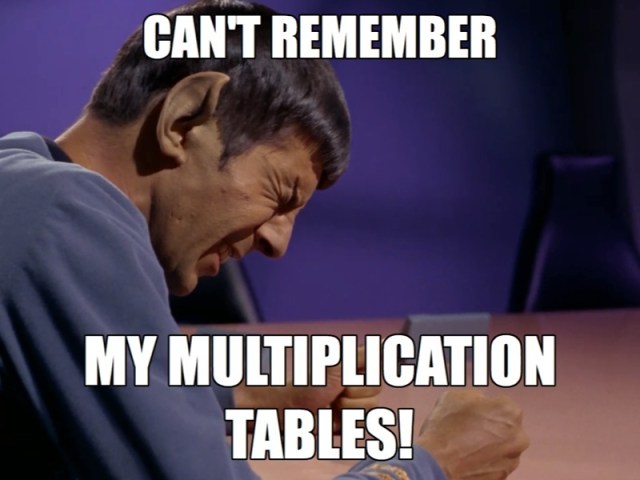 Scotty breaks into Engineering, and they discover that the Enterprise engines have been shut down. It’ll be a whole 30 minutes before they boot back up. But they’ve only got 8 minutes before they crash into Psi 2K. Noooo! Kirk wants to do some crazy maneuver involving matter and antimatter, but he needs Spock’s super cool logic for help. He rushes off.

Meanwhile, Bones and Sulu get kinky in the sick bay. No kidding, I actually typo’d this as “dick bay” just now. Bones discovers this infection takes over people’s WATER molecules. He explains “it passed from man to man through perspiration” and makes people act drunk. Bones finds the antidote and zaps Sulu with it.

Who knew water sports could be so dangerous!

Major dramaz happen in the Kirk/Spock bromance. Kirk begs for some math help, but all Spock can do is cry. Cry about how he couldn’t reciprocate the nurse’s love. 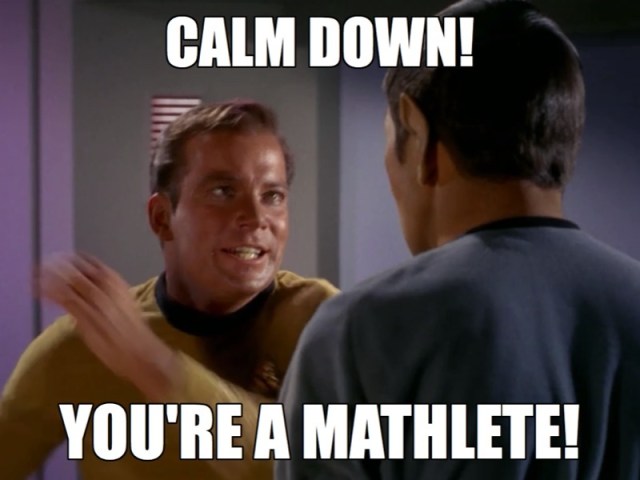 The ship is about to smash into Psi, oppa gangnam style, in a few minutes. Jim gets so desperate for help that he bitch slaps Spock! Twice! They fling insults, and you know it’s personal, because Spock calls the Captain “Jim.” 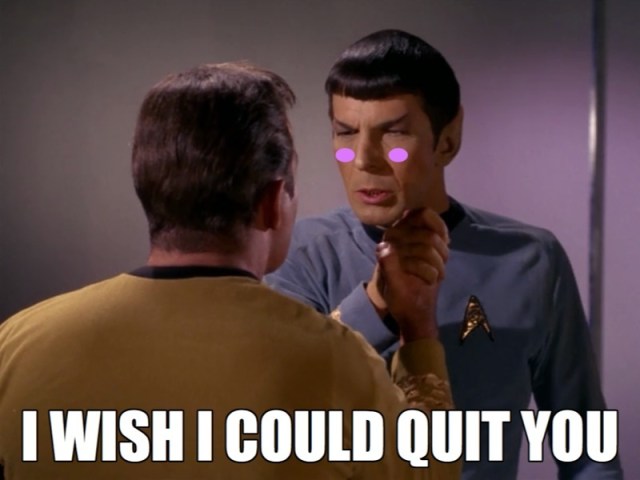 Spock comes to his senses, and decides that a crazy antimatter-engine-implosion will work. They really don’t explain the sciences in action here. But it’s okay, because this episode is freakin’ entertaining!

Kirk returns to the bridge, Bones zaps him with the antidote, and Kirk gives the order to jump away with the antimatter thingy. Somehow, they escape the imploding planet, and they’re traveling so fast, that they are going back in time. TIME WARP. 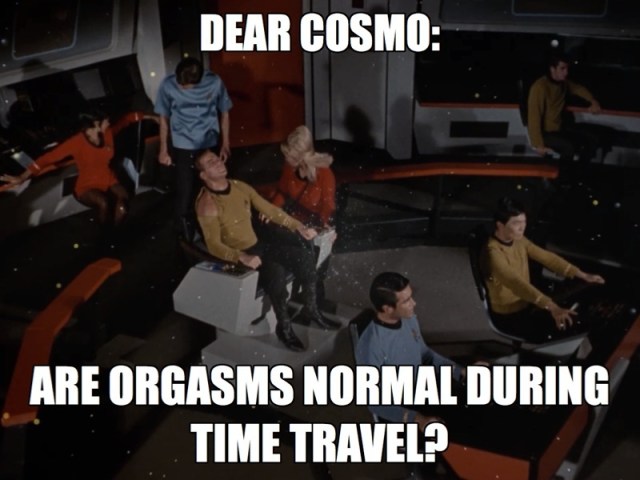 Spock rushes onto the bridge to makes sure his dear Captain is ok. Awwww. They reset their engines and drive forward at a regular speed. This sets time back to normal. Somehow, they have gained 3 extra days. Hopefully Sulu gets to remember all of his fabulousness!

I actually have no idea why they even had the imploding planet in this episode. The space plague seemed a pretty dire antagonist on its own. Psi 2K wasn’t really connected with the illness—I can’t think of why they didn’t just fly away sooner. Pretty sure the TOS creators just wanted an excuse for TIME WARP.

Tune in next week, for the hot mess that is Episode 6: The Enemy Within (Poor Frozen Sulu).

Before you go! It takes funding to keep this publication by and for queer women and trans people of all genders running every day. And A+ members keep the majority of our site free for everyone. Still, 99.9% of our readers are not members. A+ membership starts at just $4/month. If you're able to, will you join A+ and keep Autostraddle here and working for everyone?
Join A+
Related:Nerd Cultureregularstar trekStar Trek N00b