On Monday, transgender model Carmen Carrera and Orange is the New Black actress Laverne Cox made a daytime TV talk show appearance on the ABC show Katie hosted by Katie Couric. What was advertised as a platform for these two talented and charming ladies to talk about the projects they are working on and transgender issues, quickly devolved into an awkward inquisition about their genitals led by the host. Both women stepped up to the challenge, though, and turned the interview into a triumphant verbal parade by both Carrera and Cox on what it’s like to be trans, what it’s like to have people ask you about your genitals on a regular basis and what issues are really important to the trans community. 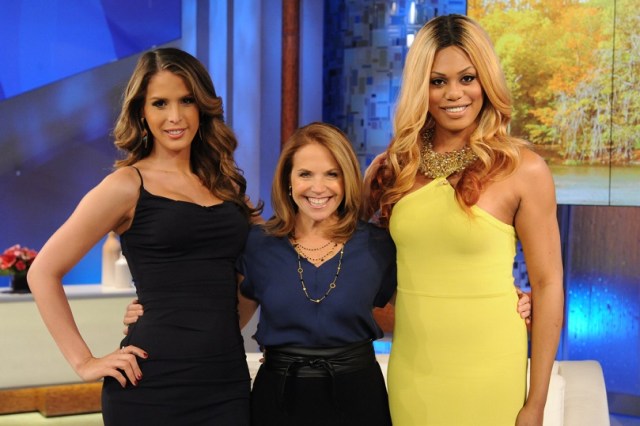 Things started to seem a little odd when the viewers kept being reminded about Carrera’s transition by being shown pictures of her in bandages and mentions of her transition at every chance. Later when Couric introduced Carrera, she said that “she was born a man and that’s why she’s on our show,” making it very clear that she’s only interesting because of her transition. Couric continued to focus on that part of Carrera’s life when she said that after being on Rupaul’s Drag Race, Carrera “realized she was done acting like a woman and wanted to become one.” However, the real trouble started when Couric started to ask Ms. Carrera if transitioning was painful because of all the surgery that she had to go through. Carmen looked a little confused and responded by talking a little about her nose job and breast augmentation and that’s when Katie pounced. She immediately asked if Carmen’s “private parts” are “different now” and if she’s had that surgery yet. Carmen Carrera responded perfectly. First she literally shushed Katie Couric, trying to get her to stop asking such a private thing. Then she told her “I don’t want to talk about it, it’s really personal” and she told Katie that there’s a lot more to get than her genitals. She said, “after the transition there’s still life to live, I still have my career goals, I still have my family goals.” 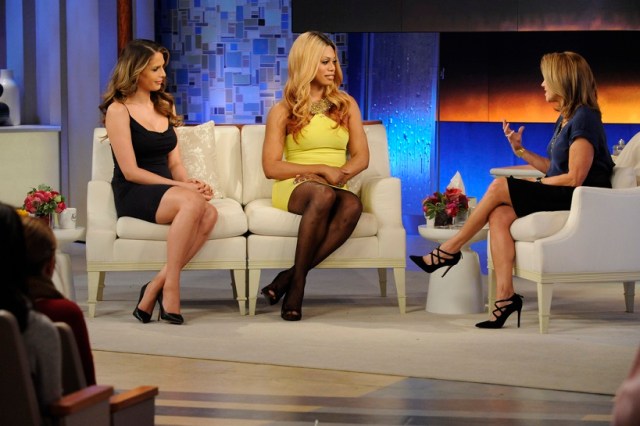 After the break, Couric brought on Laverne Cox who, at first was talking about her role on Orange is the New Black. They talked about her character Sofia Burset and how her twin brother played pre-transition Sofia on the show. Cox was absolutely killing it, saying she doesn’t see herself as a “role model,” she prefers the term “possibility model” (a term I’m totally going to steal). She says that she’s not arrogant enough to think that people should model their life after her, but she likes the idea that she is showing other people that it’s possible to live your dreams.

Unfortunately, that’s when Katie got back on the surgery track. Couric explained that she just wants to be educated and that a lot of people are curious because they’re “not familiar with transgenders.” She told Cox that Carrera had “recoiled” when asked about surgery and said that cis people are preoccupied with “the genitalia question.” Couric wondered if Cox felt the same way about that question and about cis people’s attitudes towards trans women. As soon as Cox started telling her that, yes, she keeps her private parts private and that cis people do have an obsession with trans women’s genitalia, she really started picking up steam. Cox said that the preoccupation with genitalia and transition objectifies trans women and distracts us from the real issues.

Cox was absolutely brilliant as she brought up how trans women, and specifically trans women of color, disproportionately face violence and discrimination, even compared to other LGBTQ people. She brought up the case of Islan Nettles, a black trans woman who was brutally murdered after the men who were cat-calling her realized she was trans and beat her to death. There is still no justice for Nettles, as the charges against her murderer were dropped. Cox brought up the facts that trans women face absurdly high lives of homelessness, violent crime, discrimination and poverty. Then Cox hit it out of the park when she said, “by focusing on bodies we don’t focus on the lived realities of that oppression and that discrimination.”

Throughout all of this, both Carrera and Cox remained ridiculously charming. They both appeared to be so happy to be on the show and to be able to talk about the work that they do. They were completely tactful and kept on talking about how much they love each other and are proud of the things the other is doing. It was great seeing two successful and thriving trans women of color showing so much love for each other and then completely bringing it when they were asked inappropriate questions about their bodies. I’m extremely tired of every story about trans women focusing on their transition, so when both Carrera and Cox spoke out against that line of questioning, I was cheering at my TV. Hopefully, as more and more resources are available, people won’t feel so comfortable asking strangers about what surgeries they’ve had and what their genitals look like. Trans people are more than just our bodies, and these two women showed that in the absolute best way possible. If you want to watch the whole thing, you can check out the interviews at Katie online.