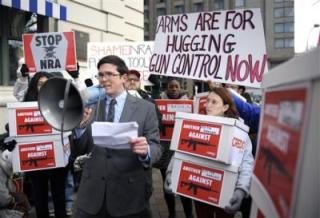 Yesterday, President Obama announced his hopes and dreams regarding gun control, measures for which he intends to rally public support and hopes to convince a “reluctant Congress” to endorse. These measures include banning military-style assault weapons and high-capacity magazines, expanding background checks and toughening gun-trafficking laws. “I will put everything I’ve got into this,” Obama told the press, “and so will Joe.”

This comes after the NRA’s announcement last month that “the only way to stop a bad guy with a gun is a good guy with a gun” and therefore the best way to curtail homicide in public schools is to arm teachers or place more armed guards in schools. Specifically, NRA CEO Wayne LaPierre called on Congress to “act immediately to appropriate whatever is necessary to put armed police officers in every single school in this nation.” A Republican congressman lamented that the principal at Sandy Hook was unarmed: “I wish to God she had had an M-4 in her office, locked up so when she heard gunfire, she pulls it out and she didn’t have to lunge heroically with nothing in her hands and takes him out and takes his head off before he can kill those precious kids.”

Even Obama has called for hiring as many as 1,000 more school-based law enforcement officers, and a CBS/NBC Poll found 74 percent of Americans think more armed security guards in public places would reduce mass shootings. I don’t.

Over one-third of public schools in America already have armed guards, including Columbine High School. There were armed guards present at Virginia Tech as well, and one of the massacre’s first victims was, in fact, an armed campus guard. Nevertheless, after the Virginia Tech shooting, Gun Owners of America called for an end to gun-free zones which “leave the Nation’s schools at the mercy of madmen.”

2. The only thing we know for sure about how the presence of armed guards affects a school is that it leads to more arrests.

In schools with their own security force, conduct that used to be handled by school administrators and counselors who specialize in child development and psychology are often handled by school police. This is problematic on several levels, including the fact that inevitably, the color of your skin is likely to have more bearing on if and how you’re punished than the actual severity of your misdeed. From a report on a pending lawsuit in a Mississippi school district over abuse by  armed guards:

The report, which is to be released Thursday, found that in one Mississippi school district, 33 of every 1,000 children were arrested or referred to juvenile detention centers; that in another, such referrals included second and third graders; and that in yet another, only 4 percent of the law enforcement referrals were for felony-level behavior, the most often cited offense being “disorderly conduct.”[…] In addition to statistics, the report described episodes in which a child was taken home by the police for wearing shoes that violated the dress code, and a school where misbehaving students were handcuffed for infractions as minor as not wearing a belt.

3. No more than 1.6% percent of mass shootings were ended by armed civilians

It’s true that sometimes shootings are halted by armed civilians, but it’s unclear what role firearms actually played in many of those instances and those instances are unfortunately quite rare. Mother Jones analyzed 62 mass shootings that took place in the United States over the last 30 years and found “in not a single case was the killing stopped by a civilian using a gun. And in other recent (but less lethal) rampages in which armed civilians attempted to intervene, those civilians not only failed to stop the shooter but also were gravely wounded or killed.”

4. The more guns Americans own, the more shootings America has

From that same analysis, Mother Jones determined that “the rate of mass shootings has increased in recent years—at a time when America has been flooded with millions of additional firearms and a barrage of new laws has made it easier than ever to carry them in public places, including bars, parks, and schools.”

After implementing strict gun control measures, gun violence decreased markedly in Australia. Homicides by firearms went down 59 percent between 1995 and 2006. Ditto in the Columbian capital of Bogotá, where deaths by firearm went down 58 percent after public possession of guns were banned by the mayor, bringing its murder rate down to its lowest point in 27 years. As far as I can tell, “arming teachers and putting more guards in school” was not a factor in those reductions.

6. This PSA is totally idiotic

7. Not just anybody can shoot a gun

Effectively using firearms requires training and practice, and there are a variety of circumstances that make it physically impossible for some people to fire a gun. Steven Strauss in The EconoMonitor notes that “Armed custodians, teachers and volunteers will have less vetting and training than a professional security force, and would likely increase the risk of deadly incidents. America has about 7 million teachers. If even a small percentage arm themselves, it wouldn’t take many incidents to exceed the current death toll from mass school shootings.” Nor should “willingness to fire a gun and kill somebody” be a pre-req for anybody interesting in teaching second-graders how to do long division. When armed civillians have been able to impair the progress of a mass shooting, it’s usually an off-duty or retired police officer, not a random civilian.

8. Mass shootings are rare, gun violence is not

Steven Strauss, in the article quoted above, did the math to determine that adding 150,000 guards — to monitor all our public schools — would cost about $15 billion a year, and if said guards are completely effective and never screw up, “based on past trends we’ll save about 10 young lives per year, at a cost of $1.5 billion/life.” It sounds crass, I know, but he’s correct that “it doesn’t take a major leap of faith  to believe that investing $15 billion in comprehensive youth suicide, murder and neglect prevention programs (instead of armed guards) would save hundreds of young lives instead of about 10 lives per year.”

9. Schools are already the safest place for students to be, let’s keep it that way

The gun lobby doesn’t just want armed guards in schools, they also want ordinary citizens to be allowed to carry concealed weapons on school campuses. But a U.S Justice department study conducted between 1995 and 2002 found that 93% of the violence against college students happen off campus, including 85% of the violent crimes against students who live on campus. In the 2008 paper No Gun Left Behind: The Gun Lobby’s Campaign To Push Guns Into Colleges and Schools, it’s noted that “elementary and secondary schools are also safer than society at large, as fewer than 1% of school-age homicide victims are killed on or around school grounds or on the way to and from school.” Certainly those numbers have changed since Newton, but not dramatically, and the paper determines: “The discrepancy in violence rates on and off school grounds is no doubt due, in part, to the fact that nearly every academic institution has adopted a policy that either tightly controls possession and use of student firearms or bands guns altogether.”

Those are just some of the reasons I think more guns in schools is a stupid idea. What do you think?