In this month’s Elle Magazine, Our Lady Of Perpetual Resting Bitch Face Kristen Stewart wears some very pretty clothes, stares miserably into space and speaks glowingly of her relationship with her very cute girlfriend, visual effects producer and dapper blazer enthusiast Alicia Cargile. While Kristen has spoken about living openly in the past, and has referred to her sexuality in broad terms, this is the first time she’s used the word “girlfriend” publicly or even really acknowledged a relationship of hers as it was happening (save for that beautiful poetry she wrote for Robert Pattinson back in 2014).

Of Cargile, she says, “I think also right now I’m just really in love with my girlfriend. We’ve broken up a couple of times and gotten back together, and this time I was like, ‘Finally, I can feel again.'”

Ever since we first spotted Kristen Stewart cavorting sullenly on the beach with her Very Good Friend Alicia, we here at Vapid Fluff HQ have been smitten. As the Twilight star has navigated invasive paparazzi and tabloid headlines accusing her of unspeakable nonsense, we’ve had mixed feelings about covering her, because it’s been very obvious that Stewart was very uncomfortable with the attention. For a while, she and Alicia were inseparable, strolling down Los Angeles streets, grabbing coffee, walking with coffee, drinking coffee, walking away from coffee. The tabloids called them roommates, gal pals, best friends — anything but girlfriends, which they very clearly were. Then, as soon as we’d finally become attached to their relationship, it was over. Stewart wandered around LAX terminals alone, Patsy Cline echoing mournfully in her earbuds, batting her impossibly long eyelashes at no one in particular. She dated another famous person, this time very publicly, and when it fizzled out we were delighted to see her seemingly reconcile with Cargile in social situations. Before long, Alicia was walking red carpets in Cannes with her gal pal, holding her comfortable sneakers for afterparties, and escorting Stewart to and from Japanese restaurants. It was truly the glamorous tabloid romance that the queer public had always dreamed of, and finally deserved.

Stewart confides to Elle that part of her reluctance to discuss her personal life had to do with the way her relationship with former costar Robert Pattinson had been sensationalized in the press. “When I was dating a guy I was hiding everything that I did because everything personal felt like it was immediately trivialized, so I didn’t like it. We were turned into these characters and placed into this ridiculous comic book, and I was like, ‘That’s mine. You’re making my relationship something that it’s not.’ I didn’t like that,” she explains. “But then it changed when I started dating a girl. I was like, ‘Actually, to hide this provides the implication that I’m not down with it or I’m ashamed of it, so I had to alter how I approached being in public. It opened my life up and I’m so much happier.” 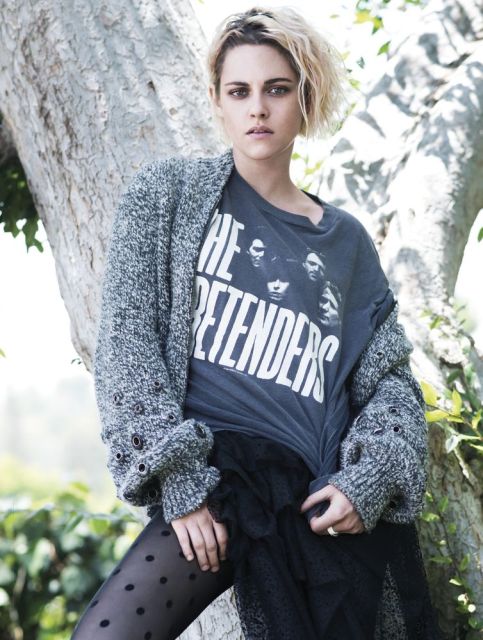 Let’s all take turns guessing Kristen’s favorite Pretenders song! Gonna go out on a limb and assume it’s not “Talk of the Town.”

This particular issue of Elle also features queer icons Hari Nef, Amandla Stenberg and Zayn Malik. Kristen Stewart is currently promoting Equals, a movie costarring Nicholas Hoult that none of us have seen because we are all very busy seeing Ghostbusters ten thousand times, and also a movie with inexcusable human being Woody Allen that we are not going to talk about. Now that Kristen is finally comfortable being visible as a famous person who is not straight, we are really excited to see what her future holds.

Alicia Cargile’s most recent project has been this awkward hug, issued on a Los Feliz street while walking Kristen back to the car following a refreshing sushi lunch.