Tongues wagged two weeks ago when our good friend and definitely 100% avid fan of Autostraddle Kristen Stewart (who I am pretty sure has never heard of this website) was spotted cavorting around West Hollywood with her ex girlfriend Alicia Cargile. Her short but intense romance with singer/actress/Snapchat enthusiast Soko had recently fizzled, and Alicia had stopped posting wistful tweets, and things were looking up.

Imagine our surprise when Kristen Stewart stopped by a special screening of Riley Keough (Elvis Presley’s granddaughter, Marie Currie from The Runaways)’s new film American Honey with a special guest on her arm – Alicia. 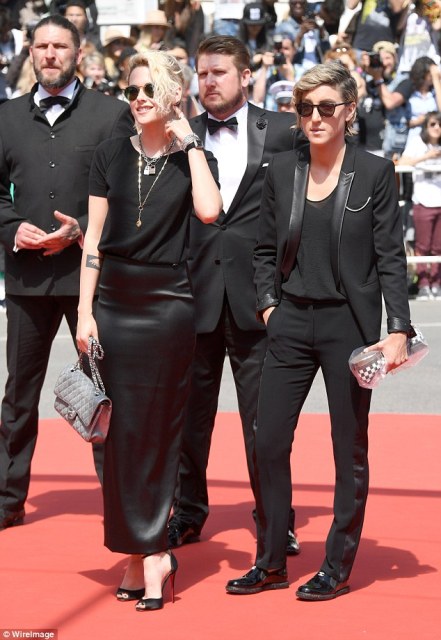 I thought Alicia forgot to take her purse out of the packaging but OMG she’s carrying Kristen’s comfortable shoes for later, which is just SO GAY. Image via WireImage

The notoriously private Stewart recently did a very candid interview with Variety, wherein she explained her lack of interest in justifying her relationships to the press. She admitted that she has kept her relationships relatively transparent for the sake of queer kids who might need to see that kind of visibility, but has no interest in discussing her private life publicly. She also said a bunch of troubling things about how it was OK for her to work with notorious creep Woody Allen because she doesn’t actually know any of the people involved, but I cannot emotionally deal with that right now so let’s get back to the topic at hand.

Kristen (who is going through a very cool long black skirt phase) carried a Chanel bag and looked serene and happy (for Kristen Stewart, this is saying a lot). Alicia appeared to have dashed into the Cool LA Girlfriend Store on Melrose, where she picked up this blazer she’s worn around Kristen before. They held hands and smiled. I can’t believe once upon a time I thought I’d be a writer and now this is what I do with my time.

Soko’s been at Cannes for a couple of days already and was seen walking a different red carpet with Lily-Rose Depp, her co-star in The Dancer. She was described in just about every publication this reporter encountered as “Kristen Stewart’s ex,” which might be all she needs to promote this movie. Following Kristen and Alicia’s resplendent red carpet walk, she was also seen looking sad in suspenders and a Mickey Mouse hat.