Researchers in the Rwandan section of the Virunga mountain range in central Africa have recently published the results of a two-year study of female wild mountain gorillas that presents some very surprising findings: 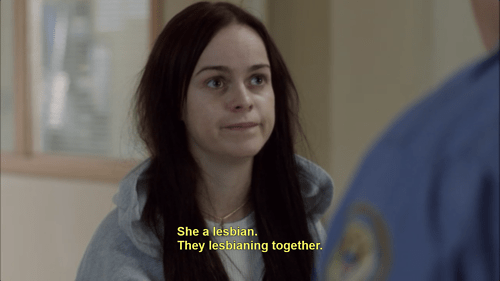 It’s true: a team of researchers led by Dr. Cyril Grueter of the University of Western Australia observed female gorillas engaging in a wide range of lesbian sex acts. Homosexuality has been widely reported in male primates, but significantly fewer studies have been dedicated to females (typical). Although lesbian gorilla activity is not entirely unheard of, this is the first time data on the subject has been officially published and available for analysis. Over a two-year period, 18 of the 22 female gorillas observed by the team performed sexual acts with other females. These sexual acts included “genital rubbing,” “genital closeness,” “mating calls during intercourse,” “arguing at brunch,” “listening to Tegan and Sara records,” “adopting cats” and of course the age-old classic, “making out for male attention.”

Dr. Grueter reports that he believes female gorillas engaged in sexual acts with each other primarily as a response to male rejection, but also as a response to sexual excitement after witnessing other gorillas having sex and/or to attract males. Apparently, about a quarter of the encounters Grueter witnessed involved at least one lady-gorilla that had engaged in heterosexual sex either the day before or after. This observation led him to conclude that same-sex attraction in gorillas probably had nothing to do with sexuality (just like human women!).

“Our main conclusion is that it’s purely sexual behaviour,” Grueter told the Daily Mail Australia. “They can easily shift from preference; It’s not necessarily that they have same-sex orientation.” While the study found that female gorilla sexuality (like female human sexuality) is more “flexible” than that of males, it also repeatedly determined that such activity was mainly as a response to frustration about the lack of interested heterosexual mates. Astonishingly, Dr. Grueter is not the same guy who interviewed Cara Delevingne for Vogue.

Male gorillas were also spotted having strong opinions about the lesbians in their midst. While some male gorillas seemed indifferent to the hotbed of lesbian activity taking place, other dominant males would aggressively interrupt. The male gorillas were often observed asking the two ladies if they’d like some company, if they’d be willing to let him watch, which one of them was “the man,” or how they knew they were gay; maybe they just hadn’t met the right dominant male yet? Possibly due to this invasion of privacy, the study reports that “…there was also a tendency for such copulations to take place in secluded places with dense vegetation.”

CLOSER I AM TO FIIIIIIIIINE: The first ever photo of gorillas having lesbian sex. Photo via University of Western Australia

While the results of this study are very exciting, they also raise some important questions. Is sexual attraction the same for primates as it is for humans, or is Dr. Grueter right and the whole thing has been a ploy for male attention? Why did lesbian gorilla sex have to be discovered by a white guy with a goatee? Is this why they never found a mate for Koko? If there are any female gorillas reading this, we would appreciate some answers.