Remember a few weeks ago, when Vogue ran an obnoxious profile of model/actress/eyebrows Cara Delevingne? In it, a smarmy gentleman suggested – through context clues that only he could see – that Cara’s bisexuality was temporary, caused more by a crisis of confidence than actual human desire. It was so ridiculous that outraged readers even started a petition demanding that Vogue apologize; as of this writing, said petition had over 21,000 signatures (Have Vogue ever apologized for anything??). 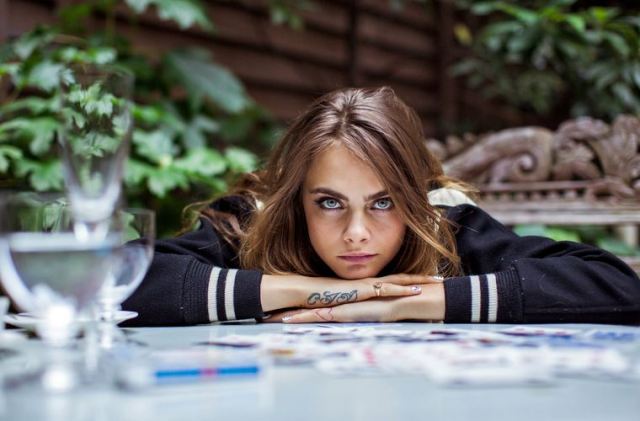 photo via Bryan Derballa for The New York Times

In a new profile by The New York Times, Cara says she found “nothing malicious” in the writer’s words, although she appreciated the sentiment of those who were offended. “My sexuality is not a phase,” she clarifies. “I am who I am.” Later, she gushes that being in love (with girlfriend Annie Clark) has helped hone her acting skills.

Like most gushing celebrity profiles, The New York Times can’t help but describe Cara in a ridiculous way (“a confident tangle of lanky limbs and messy hair, tattoos and ripped black jeans,” as opposed to Vogue’s “grinning and conspiratorial, all kinetic limbs and generous laughter, possessed of a demeanor that suggests that she has both seen it all and seen nothing at all”). Cara’s limbs are very striking to journalists. She’s very excited about taking over Hollywood and hopes to emulate the career of Charlize Theron, also a former model.

Explaining a private collection of videos of her wild, jet-setting lifestyle to Times reporter Logan Hill, Delevingne muses, “When I get older, I’m going to go through that footage and have the best time, because I probably won’t remember much of it.” Examples include “watching Lars Ulrich play a Metallica show from behind the drum kit! Or doing tequila shots with Whitney Houston just before she died!” – wait, WHAT?!  Cara Delevingne has truly been living her best life. The reporter breezes right by this brilliant statement like it doesn’t even matter, but now it’s all I can think about. Forever.

Listen, we’re trying to teach the media to report respectfully about bisexuality, but clearly we’ve got a long road ahead of us. Instead of focusing on the hidden context of Cara’s smiles or what her limbs are doing, we here at Autostraddle would at least appreciate a journalist extensively covering Cara and Whitney’s tequila-fueled adventures of yore. The people have spoken.