Everybody’s favourite pair of Fuzzy Brown Caterpillars Attached To A Human Host Cara Delevingne graces the cover of Vogue this month, looking characteristically aloof in a purple Prada dress, hailing the arrival of summer and all that we may wear to celebrate it. 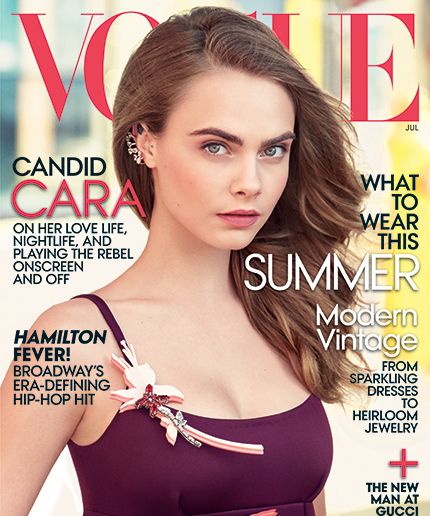 The article is mostly an eye-rolling, gushy, very typical celebrity profile, seemingly designed to tell us what a cool, uninhibited rock star Cara is. The online version even includes a video of a bunch of her famous friends (Taylor Swift, Pharrell, Derek Zoolander) congratulating her on her prestigious Vogue cover (and teaching us once and for all how to pronounce her name. It’s KAHHH-RAHHH). Cara’s a wild child – she assures the writer that she can “find fun anywhere,” and the people in her life breathlessly inform Vogue about her rebellious party-kid lifestyle. Cara never meant to be a model forever, she declares — she always intended to be an actress! She’s so excited to really blossom as an actress, and the world seems finally ready for a hard-partying, approachable supermodel to really cross over! The article touches briefly on her difficult past, her dalliances with self-harm and drugs and her complicated relationship with her mother Pandora, who has suffered from lifelong drug addiction. It also tells us that she played drums as a kid, which is goddamn adorable and maybe explains something about her relationship with her girlfriend, guitar wizard Annie Clark.

Oh yeah, her girlfriend! At long last, Vogue finally get around to asking about her:

Those who have been gathering the crumbs on Cara’s romantic trail may be confused about whether it’s men or women who excite her. She conveys a Millennial’s ennui at the expectation that she ought to settle upon a sexual orientation, and her interests—video games, yes; manicures, no—might register as gender-defiant in the realm of dresses and heels. (“I’m a bro-ey chick,” says Cara.)

Wait, what? I wouldn’t expect Vogue to sensitively consider the wide spectrum of human sexuality, but what does this even mean?!?!?

It is at this point that I realize this profile was absolutely 100% written by a dude. Not a man, but a dude.

Cara states, “I think that being in love with my girlfriend is a big part of why I’m feeling so happy with who I am these days. And for those words to come out of my mouth is actually a miracle.” Cara Delevingne has never publicly addressed her relationship with Annie Clark, or really been very forthcoming about her relationships at all! This is a huge deal! They seem so happy and in love and it’s so cute!

The dude who wrote this article goes on to ask Cara about the development of her sexuality, and she explains that it was a difficult road to self-acceptance.

“It took me a long time to accept the idea, until I first fell in love with a girl at 20 and recognized that I had to accept it,” she explains. “But I have erotic dreams only about men. I had one two nights ago where I went up to a guy in the back of a VW minivan, with a bunch of his friends around him, and pretty much jumped him.” Her parents seem to think girls are just a phase for Cara, and they may be correct. “Women are what completely inspire me, and they have also been my downfall. I have only been hurt by women, my mother first of all.

“The thing is,” she continues, “if I ever found a guy I could fall in love with, I’d want to marry him and have his children. And that scares me to death because I think I’m a whole bunch of crazy, and I always worry that a guy will walk away once he really, truly knows me.” When I suggest to Cara that to trust a man, she might have to revise an old and stubborn idea of hers—that women are perennially troubled and therefore only women will accept her—her smile says she concedes the point.

You heard it here first — bisexuality is caused primarily by mommy issues and general insecurities. Maybe Cara just hasn’t found the right man yet? The author of this article can tell Cara agrees with him, because she smiled.

That’s Vogue magazine, a magazine for women. A magazine made for women to read. Thanks, Vogue.