Hello and welcome to another edition of Autostraddle’s College Lesbianage: a glimpse of college life through the wide eyes of six freshly fallen snowflake first-year queers. This month’s update will be given individually! Today we’ve got Wellesley’s Kate with a reflection on relief, gratitude and staying out after everyone else has gone inside.

I’m making a conscious decision for this article to focus on the best parts of the past weeks. Writing about the bombings and shootings and car chases is far beyond my skill level or emotional capacity. It also doesn’t help to wallow in tragedy when spring has arrived and finals are approaching. The day after the MIT shooting, Wellesley’s campus was closed but the Shakespeare Society put on our show. I speak only for myself, but I felt better for having done the show that night, and it seemed that our audience, albeit small, also felt relieved.

Speaking of the show, it’s been going fantastically. By the time you read this, it will have closed, but I’d like to share anyway. I’ll admit, I was nervous about the part I play. I’ve never played a funny character, and Grumio is a constant stream of puns and one-liners. He thinks himself to be funny (when in reality he’s often buffoonish), so I spend several instances laughing alone at my own jokes onstage. It’s an awkward place to be in, especially if the audience follows the other actors and stares blankly at the nonsense line “the oats have eaten the horses.” But, luckily, people have been laughing and the play is absolutely beautiful. It has also been fascinating to focus on a feminist retelling of Taming, which is Shakespeare’s most famously misogynistic play. I am constantly reminded of what a dedicated and talented group of people my friends are, and how glad I am to know them. 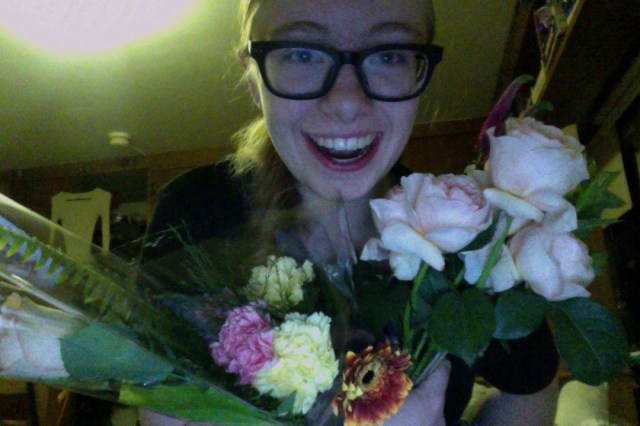 I got flowers for opening night!

Shakers’ dedication to one another is evidenced by our tradition of Hoop Rolling. The graduating seniors roll hoops down a hill, and the first one to pass the finish line is supposedly going to be the most successful as she heads into the real world. Also, we throw the winner in the lake. To ensure that our Shakes seniors would get good places in line, their little siblings slept out all night at the starting line. Although we were sleeping in sleeping bags on concrete, it was a blast. We stayed up late laughing and eating M&Ms, wrote encouraging messages on the street they would be hoop rolling down, the seniors brought us pizza at 1am, and we woke up cuddled together in the morning to spring sunlight on our faces. Also, our seniors did so well and everyone was proud of them. 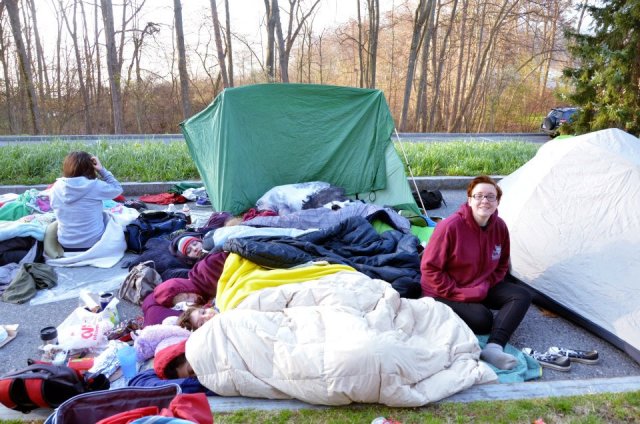 As we head into finals, I’ve been making sure to take time for myself. The day of April’s full moon, there was an open boathouse late at night, which meant that we got to take out boats (I got a kayak) and paddle around under the full moon. It was magical and relaxing in the most basic way – just moonlight and nighttime and black water all around. I hadn’t been canoeing since I was a child, but my mom and I used to go a lot. I went with friends, but stayed an hour after they left, floating alone and thinking to myself, until the lifeguards told me I had to go in.

Kate has written 2 articles for us.