RIESE, EDITOR-IN-CHIEF: Feminism was about equal rights, which we already had (or so I thought). Girl Power was more like it, with its sexy Ginger Spices and Bridget Jonses and Carrie Bradshaws.

I grew up post-feminist. Feminism was what my Mom did before my birth in 1981 and why a woman allegedly needed a man like a fish needed a bicycle and why a little girl like me (though I often passed as male) could be whatever she wanted to be when she grew up. In Ann Arbor’s tiny liberal socioeconomically homogeneous bubble — and the even tighter seal of my gifted/alternative/arts schools — I generally befriended a racially diverse mix of precociously fierce girls and wiry emo bisexual boys with similarly idealistic upbringings.

The seal cracked sometimes, like when visiting strictly gendered family out-of-town, or on my soccer team with pretty public school girls who already shaved their legs and hadn’t read Our Bodies Ourselves. Over time, those cracks would destroy me/unearth necessary truths, but I didn’t know that yet. All I knew was I’d feel something gross/different clawing at me: something wretched & sad & needy for their Female-to-Female Approval.

This insecurity/depression soured me towards the Feminism that was preventing me, I felt, from knowing things I needed to know to be a Girl in the Real World of Bitches and Boyfriends. I didn’t want to be so “different” — and I certainly didn’t want anyone to think I was a lesbian. My Mom’s brand of in-your-face feminism seemed less and less like a liability I could afford. And although I was teased for being ugly & flat-chested and my friends & I cycled through every teenage girl tragedy addressed in Reviving Ophelia — eating disorders, self-mutilation, sexual or physical abuse, mental illness, et al — I didn’t see that feminism offered theories about & solutions for those issues, only that it was a political agenda sported by women who didn’t wear bras. And I really wanted to wear a bra! (I’m over that now.) 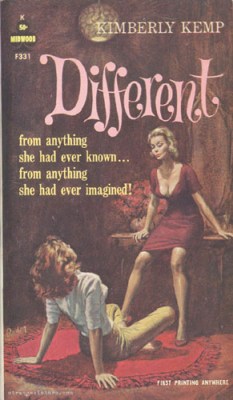 “Girl Power” was more like it, with its sexy empowered Ginger Spices and Bridget Joneses and Carrie Bradshaws.

I can’t sort out my memories besides that I clearly was feeling one way and acting another — not wanting to be seen as a lesbian, coupled with a ton of grief & depression & just a lot of issues — and to be honest, I honestly think a feminist lens could’ve really benefited me at the time.

I kinda enthusiastically embraced the capitalist patriarchal co-opted version of smart, progressive pro-sex feminism embodied by watered-down Girls (Gone Wild) Power. At 20, I was going to school, waitressing, and living in a condo with a frat boy boyfriend and a puppy, cooking him dinner every night. I was scared of women and had alienated most of my female friends. I’d go see “boy movies,” watch his shows & listen to his music, but my boyfriend dated me for ten months without reading a single word I’d written, let alone a word by Adrienne Rich. I internalized that double standard.

I started openly owning the feminist title maybe mid-college, after that relationship.

‘Cause throughout all of that; I’d been reading a lot! That’s the key! In addition to everything I learned in Sociology and other women-oriented classes, I read Schoolgirls: Young Women, Self Esteem and the Confidence Gap in early high school and decided my life goal was to make middle school easier for girls, as I’d been so colossally depressed for most of it. There was Bitch Magazine and Bust. The World Split Open: How the Modern Women’s Movement Changed America, Revised Edition changed my life. Also The Body Project. Over time I gradually stopped favoring male authors over female and now my favorite writers are all women: Lorrie Moore, Mary Gaitskill, Joan Didion, Pam Houston, Eileen Myles, A.M Homes, Megan Daum.

I read, and I worked with girls, tutoring, doing a photojournalism project at a pilot all-girls middle school, mentoring at a treatment center with sexually abused pre-adolescents, teaching at a juvenile detention center…  at some point I saw the light, or maybe just stepped into the light.

I learned feminism’s importance real quick out there in “the real world.” Don’t think day-to-day gender discrimination in the workplace still exists? Try waiting tables! Once my naive, 18-year-old thrill of being objectified constantly wore off, I got angry about the daily sexual harassment and inexplicable disparity of weekly income — we tallied one week and found that regardless of race & sexuality, men made on average $150 more per week in tips than women working the same shifts. But that was nothing compared to the actual job market where our male friends seemed to seamlessly prosper while all my female friends struggled to get an unpaid internship or stay out of debt.

Now I’m completely insane, I start fights with strangers. I’ve basically been this way all along, I just didn’t use it before.

KATRINA, EDITORIAL ASSISTANT: Being a woman and being a feminist finally made sense, and there was no need to hide it anymore.

The babyhood of my feminism began in high school — not really as a philosophy or identity, but just as a defense against a certain group of boys in all my classes who insisted that it was hilarious to make rude anti-woman comments all throughout every class, whether it be about the suffragettes, Joan of Arc, or Queen Elizabeth. Yeah, I know, it’s ridiculous. Seriously guys (girls? grrrls?), no one has had shit on Queen Elizabeth since like the 1700s, and besides, anyone who has done so has gotten their theoretical ass kicked by Helen Mirren anyway.

Not only did these boys feel the need to deprecate historical ladies, but they also sneered at any girl half willing to call them out and snickered at the mere mention of feminism. And so even though what these guys were saying was incredibly offensive, it seemed almost impossible to talk back to them (an entirely too familiar power dynamic – wussup homosocial behavior), and the rest of the class (not just the girls) was left silent. Until, of course, one day when I was feeling particularly indignant, and I suddenly found myself going all Hillary Clinton on their asses in a long tirade which concluded when I – to my own surprise – identified myself as a feminist and realized that as long as we are people in this world, we are affected by sexism, and as long as sexism exists, we should all be feminists.

“I – to my own surprise – identified myself as a feminist and realized that as long as we are people in this world, we are affected by sexism, and as long as sexism exists, we should all be feminists.

+
After a long, strange, queer freshman year of college, I had finally settled into my sexuality, only to be met with the trouble of gender. A brief period of genderqueer questioning was ended when my mother insisted that as long as I lived in her house, “I had to look like a girl.” I realized then that it was ridiculous for me to try to “look” like a woman, because, it turned out, I already felt like one. I’m a woman, yes, though unconventionally so, but I figured that it’s better that way. Why try to conventionalize my own identity or any identity at all? Being a woman and being a feminist finally made sense, and there was no need to hide it anymore.

Whenever someone is rude to me IRL or on the Internets, my girlfriend always tells me, “Haters make you famous.” But now it’s become clear that those who sip on the haterade and eat the hatertots have turned out another unexpected result: haters make me a feminist.