SARAH, ASSOCIATE EDITOR: I was secretly terrified of being gay or being different, so I never delved beneath the surface. But then I got to college.

I didn’t give feminism much thought until college. If asked directly, I probably would have identified as a feminist before then, but I didn’t really understand the implications. In high school, I actually didn’t think about much at all. I grew up in a very privileged town, and I avoided thinking deeply about my identity in any respect. I was secretly terrified of being gay or being different, so I never delved beneath the surface.

But then I got to college: I officially came out, I met some progressive feminists, and I started taking sociology classes. My friends and my classes forced me to learn about feminism, gender studies and queer theory. On top of that, being gay and having a computer allowed me to connect with a bunch of awesome women I probably wouldn’t have met otherwise, and their influence has especially shaped my feminist views. I started thinking about things I had never thought before. Did you know studies show that married heterosexual women do the same amount of housework whether they have a job or not? And “the same amount” is usually a pretty large amount. Reading things like that made me realize how much work was left to be done.

“…because even though living in ignorance can be blissful,
it’s actually a lot more fun to know who you are and know you’re a part of something important.”

+
So basically, I went from being oblivious to being a big feminist in just a few months. It’s such a cliche, but I became a completely different person in my first year at college. I’m SO thankful for that now, because even though living in ignorance can be blissful, it’s actually a lot more fun to know who you are and know you’re a part of something important.

Because all of this stuff happened at the same time for me, my gay identity and my feminist identity are intertwined. I tend to see all equality movements as one big effort. And the more involved I get, the more I think that’s true.

CRYSTAL, MUSIC EDITOR: The moment I began identifying as a feminist was when my irritation and embarrassment over my mother’s protests turned into respect. 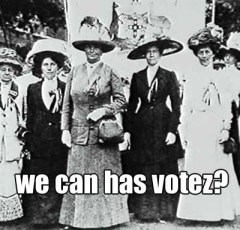 My mother began teaching me about feminism at a really young age. The biggest lesson I can recall happened on my fourth birthday: she dragged me down to the local soccer club and refused to leave until they agreed to let me play for the boy’s under-5 soccer team. All the folks in our tiny redneck town got really upset about it, because it was a “boys’ sport.” I wasn’t too stoked either because of boy germs, etc.

I was too young to fully understand what she was trying to achieve. It wasn’t until I became a teenager that I started to make my own observations about inequality — largely demonstrated by some sexist employers — and then suddenly every fight I recalled my mother having during my childhood started making sense. So I guess that’s the moment I began identifying as a feminist: when my irritation and embarrassment over my mother’s protests turned into respect.

Unlike a few feminists I know, I’m no expert on the movement or theory. That’s mostly by choice, as feminism as a topic really stresses me out for a few reasons. I’ll protest and challenge authorities and even quit jobs in the name of equality, but ask me to discuss feminism on a political or philosophical level, and I’ll bee-line for the exit.

JC GONZALEZ, GUEST ROUNDTABLER, BLOGGER/ARTIST/HOMOSEXUAL MAN BEHIND “BRIGHT PINK TEARS”: I realized that the only girls who received the least amount of hazing were ones who served male fantasizes and sexual expectations. I was quiet the entire drive home until I blurted out, “Mom, I think I’m a feminist.”

I’ve come a long way in the few years I’ve been defining myself as a feminist and as a queer boy. Terminology means nothing, though; I’ve always been both of those labels since childhood.

I grew up in the borderland of El Paso, Texas, in a dominantly Hispanic/Latino culture — a culture where feminist ideology, philosophy, literature, and entertainment is not only scarce but mocked. Luckily, I had my older sister. She was born 10 years ahead of me, so I naturally idolized her. She took me under her wing and made me listen to female artists since the day I was born. My training varied from Björk to Naked Aggression, from her making me read The Vagina Monologues in middle school to introducing me to Tank Girl comics instead of your standard male superheroes. 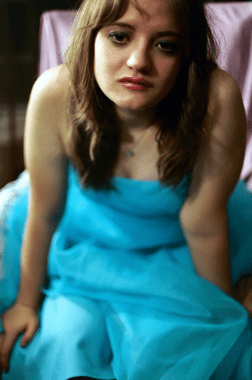 I like to think of it as training to survive and battle the oncoming years, when I would realize the existentialist complexities and social struggles of sex and gender. Soon I would enter high school, where I befriended a popular cheerleader who I respected greatly. She was sexually liberated, intellectually self-assured, confident, and unafraid to show assertive attitude. Naturally, with such characteristics she was also one of the most hated and gossiped-about girls in school. Another group of friends I had were girls who were not into physical superficiality, and focused on academics instead of make-up. These girls were also the subject of harsh criticism and hate.

One day, when being driven home from school by my mother, as I was not old enough to own a license, all this became apparent to me. I realized that the only girls who received the least amount of hazing were ones who served male fantasizes and sexual expectations. I was quiet the entire drive home until I blurted out, “Mom, I think I’m a feminist.”

That was my coming out moment. I ranted to her about all the gender-related injustices inflicted upon my posse of girlfriends and how macho boys made me sick to my stomach.

My mother went on to explain that it was merely the childish and foolish world of high school, a place where ignorance existed. I figured beyond high school these issues would drop dead, and was soon met with the reality.

By this time I could fend for myself when searching for feministic media. I discovered Bikini Kill and the Riot Grrrl revolution. In my sheltered and naive situation, the music was a breath of fresh air. Kathleen Hanna explicitly shrieked her way through the wrongs inflicted upon women in the world, and I was brought to tears when overwhelmed with emotion the very first time I listened to them. I was a lone star in my little world when it came to such blatant feminism, and listening to a like-minded band was validating and inspiring.

All of these young, budding experiences were a launch-pad to explore women’s studies beyond the world of entertainment. Buying essay collections like Sisterhood is Powerful and taking feminist art history courses, studying gender theory, and so on. I was a baby feminist as a teen, and now entering my twenties, I’ve come a long way.

EMILY CHOO, INTERN With all the sexist jokes flying around, I kind of worked up in my mind that I didn’t like that and wished that we could all get along and live in blissful equality.

I’m not sure I ever knew what a feminist was, like the exact definition. I always knew that I wanted equality for women, but I never realized that that meant I was a feminist until I was about 16 and I figured out that feminists exist. It was kind of like when I discovered bisexuality, except less of a “eureka!” moment. I sort of grew into the feminist thing.

In high school I was in a sports program that was like 80-85% testosterone, and so with all the sexist jokes flying around, I kind of worked up in my mind that I didn’t like that and wished that we could all get along and live in blissful equality. JK, I wished that the dude in my class would stop saying that women should be in the kitchen. More importantly, I wished that girls would stop going out with him because a) they were only encouraging his behaviour, and b) I wanted to go out with them. 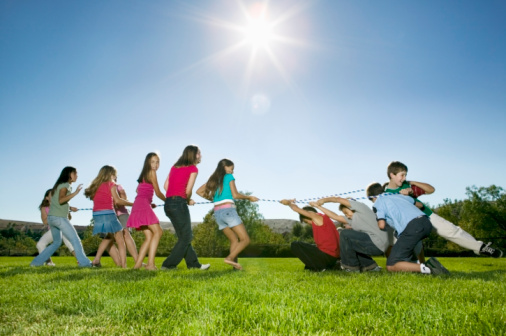 I think I always had strong female characters in my life, or rather, a gaping hole where my mother should have been. Unconsciously I probably tried to identify with her, and the fact that I thought about her a lot only made her female “presence” stronger. Also, I always looked to my aunt as a strong woman who had a really put-together life and who introduced me to The Spice Girls, who coincidentally were all about Girl Power.