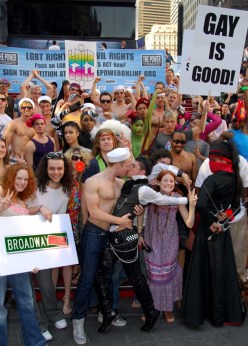 Queer (Up)Rising and New Gay Activists Take Back Their Movement: The “younger” activism group is making headlines- As Ross reports, since December, Dillon and fellow activists have crashed Hiram Monserrate’s Christmas party, chained themselves to the door of a New York City marriage bureau, heckled Harold Ford Jr., phone-banked for José Peralta, and spent several nights a week attending community board meetings in the districts of Democratic state senators who voted ‘no.’ (@nypress)

The 8th annual Youthopolis took place in Seattle last week, “a high-energy award ceremony and celebration honoring youth leaders in Seattle’s queer community.” The theme for this year’s gathering was “It’s Raining Queers” and guests included en. Ed Murray, transgender rights advocate Marsha Botzer (co-chair of the NGLTF), Team Gina, Sketch Echo, and Aril & Fin. Anyone under the age of 22 can win an award, regardless of orientation.

“Youthopolis will only get better,” Fletcher said. “Like RuPaul, Youthopolis just gets better with age.”

Tips on Choosing Gay Friendly College: “Some colleges are now reaching out to prospective students who may be lesbian, gay, bisexual or transgender and letting them know that they will find a welcoming environment on campus.” (@northjersey.com) Also, if you haven’t seen it already, The New York Times did a great piece on picking a gay-friendly campus earlier this month: They Are Here to Recruit You.

How about Rutgers? Where Delta Lambda Phi, the gay fraternity, put on quite a show on Rutgers Day featuring obvi Lady Gaga.

At the University of Wisconsin-Madison, The “Take Back the Night” march is incorporating gay rights into its agenda: “Calls of “Sexist, racist, anti-gay, don’t you take our night away” and “Two-four-six-eight, no more date rape” rang throughout State Street and the Capitol as approximately 150 people marched in the Take Back the Night rally Thursday.”

Transgender Student Speaks Out Against Attack: A transgender student spoke out about the brutal assault during a rally at California State University, Long Beach on Thursday… “The person who attacked me knew my name, pushed me back in a stall and craved ‘it’ into my chest,” Carpenter said. He was attacked on campus, in the men’s restroom. Carpenter said the attacker tried to cut away his self-respect. “For those of you who don’t know why ‘it’ is such a derogatory term, it takes away a person’s humanity. It takes away their personhood. It makes them less than human,” he said.

To Restore ROTC, End Gay Band: “Quick repeal by Congress of “don’t ask, don’t tell’’ would restore fairness and honesty as pillars of the military and re-establish ROTC on campuses. It can’t happen soon enough.” (@boston.com)

Also Dan Choi spoke at Harvard University last night on the topic of “One Man’s Quest to Serve His Country.”

Either the all-male cast of “Telephone: The Afghanistan Re-make,” produced by troops from the 82nd Airborne Division, really want to get discharged under Don’t Ask Don’t Tell, or the heterosexual Americantroops aren’t nearly as frightened of homosexiness or close quarters as the right-wing pro-DADT wings would have you believe! WE LOVE THIS VIDEO 4EVA:

The good news is Laura Bush didn’t want George to make gay marriage the divisive issue it became in the 2004 election:

“Before the election season had unfolded I had talked to George about not making gay marriage a significant issue. We have, I reminded him, a number of close friends who are gay or whose children are gay. But at that moment I could never have imagined what path this issue would take and where it would lead.”

The bad news is she blames the whole thing on John Kerry!

John F. Kerry’s unsolicited mention during a presidential debate that the daughter of then-vice president Dick Cheney was gay still rankles George W. Bush’s closest confidants, according to books that offer an unusually intimate view of the 2004 campaign from within the former president’s circle.

“Coming out in my teens and transitioning to male in my early 20s left me without a faith community. Had I wanted to go to church in Olympia, I’m not sure I would have been able to identify where to go. Even churches that accepted gay and lesbian people were not necessary open to transgender people. By 21, I was sure that religion was not for me.” (@the olympian)

A lesbian has admitted stabbing her lover in the grounds of a church after being dumped. (@stv)