LANEIA, EXECUTIVE EDITOR: I grew up irritated, confused, unknowingly gay, oppressed, sexualized, objectified AND THEN I MARRIED A MAN.

I was raised with a confusing message when it came to equality and gender roles. On one hand, I was told that no man was beneath or above me and to treat everyone with respect and kindness. At the same time, women in my family treated men completely differently than they treated each other. It was clear from pretty early on that men were good for yard work and making an impact in public (the idea of physical protection, being validated by a man’s presence, etc.), but that without a woman, most men couldn’t feed or dress themselves, pay bills, keep a house clean or raise a child.

“Like, I thought we were all equal here? At the same time, I was getting the explicit message that I needed a man to complete me. Also I just had a lot of issues.”

+
If I ever complained about how boys were allowed to behave like animals or assholes, the stock response was, “Laneia, they’re boys. That’s just how they are.” Well that’s enraging to hear at any age. And also really confusing! Like, I thought we were all equal here? At the same time, I was getting the explicit message that I needed a man to complete me. Also I just had a lot of issues. 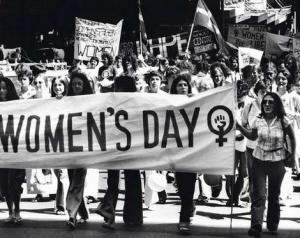 So I grew up irritated, confused, unknowingly gay, oppressed, sexualized, objectified AND THEN I MARRIED A MAN. You’d think that would’ve pushed me over the edge — and it almost did — but actually it was the death of my maternal grandmother a few years later that made me reevaluate pretty much everything. In the months before she died, I learned so much about her life and how she had navigated it.

It occurred to me that she’d been modeling feminism for me my whole life. She’d worked hard for an education, owned her own business, presided over the family finances with unrivaled authority and commanded the same level of respect that she extended to others. My grandmother had quietly practiced her own brand of rural feminism — the kind no one really talked about.

Unfortunately, I had the self-awareness of an amoeba (still do?) and failed to notice or appreciate any of her examples until my mid-twenties, when I started talking to like-minded women and questioning everything. What a super interesting, dramatic, emotion-filled time in my life! I was like, “Hey, baggage! There’s so very much of you! GOOD GRIEF, LET’S GET STARTED.”

My frustration and anger and feelings of unrest had a name: feminism! There were books to read and things to talk about and people who understood. It was all very life-affirming and slightly overwhelming.

ZAHRA, INTERN:
What people say about a term is not necessarily what it means or what it stands for.

I’m not sure there was a particular moment when I did begin to identify as a feminist. I think I always knew that people of all genders deserved to live equal lives, or at least that’s how I felt about it. I can’t say that I go around telling everyone that I am a feminist. I just take it for granted. It seems to be something so strong in me that I forget that others don’t have the same thoughts. That means that I’m more surprised when someone makes comments that aren’t feminist and less so when someone says they are a feminist.

Of course, at a certain point I learned that there was a way of describing people who believed in equality for women (and gender equality in general). Part of me wants to say that the concept of feminism arrived separately — in the form of more negative “bra-burning” stereotypes — than the idea of gender equality. Reconciling the two came from educating myself, discovering that what people say about a term is not necessarily what it means or what it stands for.

LILY, INTERN: I may be criticized for this, but I truly feel that the Spice Girls were a big part in the formation of my feminist identity.

I feel like I’ve always thought of myself as a feminist. I’m not quite sure when I started associating my identity with that specific word, but I also can’t remember a time when I wasn’t aware of that word’s existence. My parents made sure to raise me and my brother on the notion of equality between all genders, ethnicities, sexualities, and so forth. After church and catechism each Sunday (my dad is the most liberal devout Catholic in the world), my mother would be sure to remind me that a bunch of men wrote the bible, God is whatever gender/non-gender you make him/her/it out to be, and that Eve was blamed because of the patriarchal nature of the bible. 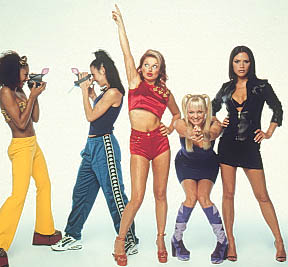 My mother is most definitely the person from whom I first learned about the ideas of feminism, and she has been my biggest role model in forming my identity. And I’ve always looked up to a number of strong women in my life, especially women musicians. I may be criticized for this, but I truly feel that the Spice Girls were a big part in the formation of my feminist identity. Ok, so they may have pranced around in minimal clothing while wearing gobs of make-up, but I don’t think either of those things are anti-feminist. They preached the ideal of “Girl Power” to their young, impressionable, and mostly female audience. Many of their songs had positive messages about the power of women, and even their movie didn’t focus on finding boys or some silly love story but rather on how hard each of the women worked to be successful.

To me, the word just means the belief in the equality of men and women, and why would anyone want to deny someone her equality? As I’ve grown older and begun to take classes on the ideas of feminism, I’ve come to question my knowledge of what feminism really is. I still consider myself a feminist, but I’m learning more and more each day about what that word can really mean.