***(A note to readers: Queer Pt. 2 has not escaped or been forgotten! All of your fantastic and thoughtful comments have inspired me to set that one up a little differently. Stay tuned, and in the meantime have fun at the drag show.)

When I was looking up “drag” in the World Library Catalog, I got about half things-I-was-looking-for and half mathematical-theses-about-wind-resistance. In my head I kept hearing the immortal voice of drag queen Dorian Corey, dabbing on eyeshadow and telling me how I don’t have to bend the whole world. “If you shoot an arrow and it goes real high, hooray for you.” Corey’s arrow went pretty high, is the thing. Paris Is Burning helped bring a new generation of attention to modern ball and house culture and now we all know how to kiki. Michelle Obama throws shade instead of rolling her eyes. Lady Gaga is Joe Calderone and RuPaul is “a giant Fuck You to bigotry.” Drag is aerodynamic right now. So it’s a good time to talk about why we call it that.

“Drag” in the verby, plow-pulling sense comes from the Proto-Indo-European “dhragh,” which became the Proto-Germanic “dragan,” which became “draga” in Old Norse; all mean “to draw along the ground” and, sadly, have nothing to do with fire-breathing lizards. Even when it comes to slang, the field has always been pretty crowded. “Drag” in 19th century England could mean a rope, a buoy, a three-month prison term, or the bait used to lure a hunted fox. By 1960, the Dictionary of American Slang has thirteen entries for “drag,” ranging from “a share, percentage or portion of something” to “a railroad train” to “a marijuana cigarette.” If your drag (date) was being a drag (boring), you could use your drag (influence) to drag her down the main drag (street) to see a drag race (two hot rods in an acceleration contest). 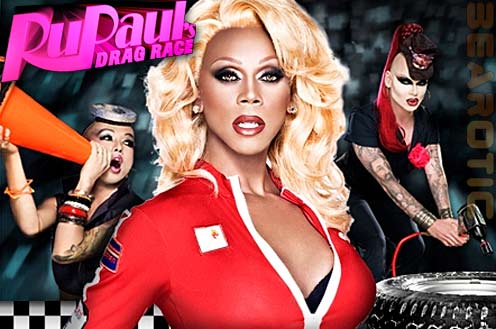 FOXES AND CARS AND SMOKIN’: ALL DRAG DEFINITIONS ACHIEVED

Drag in the absolute most general “wearing clothing typically associated with the opposite sex” sense has been around, I’d hazard, since the first pelts, but it wasn’t called that for a while. As Elyssa Maxx Goodman sums it up in this pretty great myth-dispeller, “true drag was borne of the stage.” In 1588, Pope Sixtus V took a hard line on First Corinthians, in which Paul instructs  “Let your women keep silence in church; it is not permitted unto them to speak” and banned women in the papal states from appearing onstage.  This, combined with the general reputation of actors as “coarse, boisterous . . . bohemian [and] half-lawless,” barred most European women from the theater for several decades (England held out the longest, until the 1630s). In the meantime, someone had to play Juliet and Lady Would-Be, and “female impersonation thus became an important ingredient of Elizabethan and Jacobean theater.” 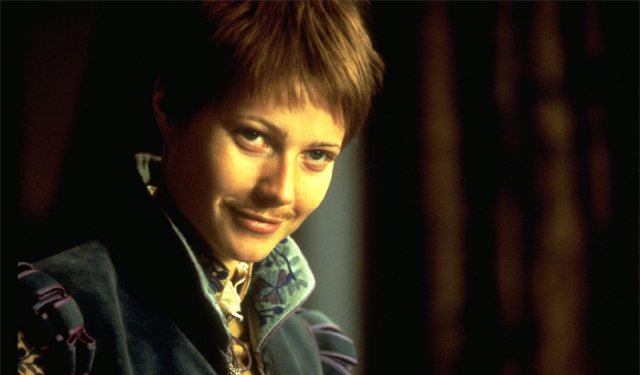 MEANWHILE, MALE IMPERSONATION IS AN IMPORTANT INGREDIENT OF AMERICAN MOVIES ABOUT JACOBEAN AND ELIZABETHAN THEATER

Some date the term “drag” back to this time as well — a popular story holds that Shakespeare would mark up his show manuscripts with “Dr.A.G.,” for “Dressed As Girl,” next to places where a male actor was to play a female character. Others point out that acronymic words weren’t popular until the 20th century and that Shakespeare made up enough words as it is and should stop being greedy. A more reputable theory, and one I like better, says that “drag” referred to “the sensation of long skirts trailing on the floor.” The word first cropped up in writing in 1870, when Reynold’s Newspaper published someone’s promise that “we shall come in drag, which means men wearing women’s costumes.” That the author felt the need to define the term means it must have still been pretty slangy at that point; other citations from around the same time (“not quite so low as going about in drag”; “I don’t like to see low comedians in drag parts”) suggest that the word had derogatory connotations, although it’s hard to say whether that’s because of gender presentation squeamishness or just a dislike of cheap jokes.

In the 1890s, “drag” hopped the ocean, caught “ball,” and really started coming into its own. The first published mention of a drag ball that I could find also marked the first time I saw “drag” used in a medicalized context, a pretty sure sign that the word has picked up queer implications. In an 1893 article in Alienist and Neurologist called “An Organization of Colored Erotopaths,” Charles H. Hughes of St. Louis, Missouri wrote about “an annual convocation of men called the drag dance, which is an orgie of lascivious debauchery beyond pen power of description” (Hughes, of course, tries valiantly anyway, somehow powering his pen into describing the “feathered and ribboned head-dresses, garters, frills, flowers, ruffles, etc” worn by this “lecherous gang of sexual perverts and phallic fornicators,” some of whom were rumored to be “employed . . . in the Government departments”). 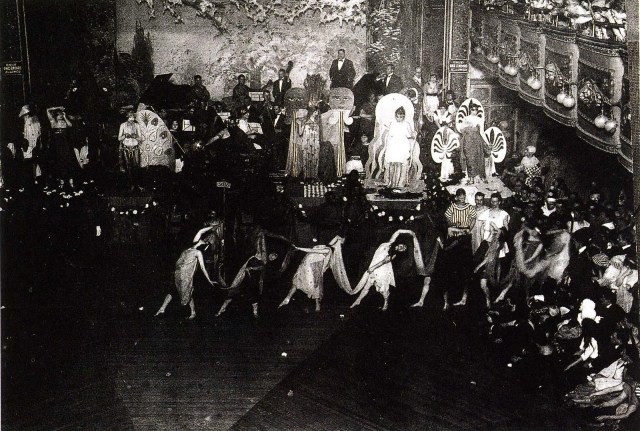 A SCENE FROM THE HAMILTON LODGE BALL {VIA QUALIAFOLK}

This level of pure disapproval didn’t last long, although its rubbernecking spirit was hard to shake. According to historian George Chauncey, by the early 1930s, the public saw drag balls as “the most dramatic manifestations [of] gay subculture,” a subculture that was itself going through a period of “popular fascination.” As a result, thousands of non-participants flocked to the most popular balls either to gawk or to respectfully appreciate (including Langston Hughes, who famously called the Hamilton Lodge Ball a “spectacle in color”). I’ll leave it to people smarter than me to tackle the full implications of a space where people of all different ages, races, ethnicities, social classes, gender identities, and sexualities got together to perform each others’ identities (if you’re interested, Tim Lawrence and Jonathan Lykes are good starts). But from a linguistic perspective, this history makes the generalization of “drag” past gender and into other social areas easier to understand. As early as 1966, a critic described Lawrence Olivier as “attired in Arab drag,” and Mark Zuckerberg, carting his multi-billion dollar self around in a hoodie and flip-flops, has been accused of class drag.

As more drag balls started popping up, the word “drag” became increasingly tied to ball culture. Ball culture has its own attendant vocabulary, some of which quickly entered the larger queer lexicon — the term “coming out,” for example, is a nod to the same debutante cotillions that inspired the “ball” idea, and was originally meant to suggest a spirited entrance into a welcoming society rather than an escape out of a lonely closet. “Drag queen” showed up in print for the first time in 1941; “drag king” got its ink crown in 1972 in a book named after its counterpart, though it was almost certainly used before that. In the past couple of decades, the word drag and all it implies have become touchstones for contemporary gender theory, with its focus on performance and invention, and on discontinuities between appearance and reality — as Cynthia J. Fuchs puts it, drag is “a show which resists normalization as it ironically observes it, exposing the seams of the display.” Judith Butler loves drag because it parodies “the notion of an original or primary gender identity.”  On second thought, maybe we should credit Shakespeare with the coinage. To take his line and drag it, all the world’s a stage, and all the men and women players, and there’s nothing mere about it.