I bet you’re as curious about the spooky and ominous title as I am—if so, you can watch along here.

The episode opens with Captain Kirk and Yeoman Rand setting up for some kind of ritual. Rand’s lighting candles, and Kirk stands at attention behind a podium.

“Here Comes the Bride” starts playing in the background. OMG, are we about to watch our first wedding in space?

Maybe I need to snag some whiskey too.

Turns out that two crew members, Angela Martine and Robert Tomlinson, are gonna tie the knot! It’s kinda a bummer that we’ve never met these characters before because this totally would be more meaningful to me if I had!

I started wondering about civil rights and marriage statuses within Starfleet society. Is Lady Gaga marrying queers on stages across the galaxy in 2266? I sure hope so!

Kirk explains that it’s his responsibility to lead marriage ceremonies on the Enterprise. But who, oh who, will lead the ceremony when he and Spock want to get married? 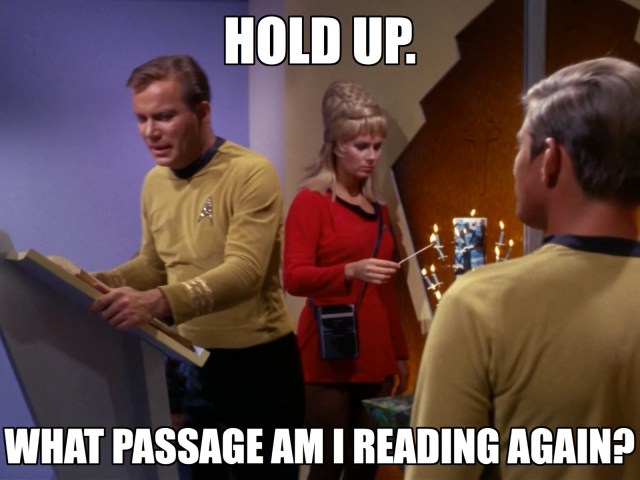 The ceremony is short-lived, because the nearby Earth Outposts contact the Enterprise because they are under attack! Kirk snaps into OH SHIT mode, and orders EVERYONE to their battle stations. This is another first — and it’s pretty amazing to watch the mood transform from courtly to combative.

NO ONE FUCKS WITH OUR WEDDINGS.

Turns out that the location of these Earth Outposts are extremely significant. About 100 years prior, Humans and Romulans duked it out in the Earth-Romulan War. Neither race knows very much about the other — including what they look like, since video communications between ships didn’t exist then. It reminds me of how often Captain Kirk has used video communications to attempt mediation in the past. Perhaps we should Skype more often… 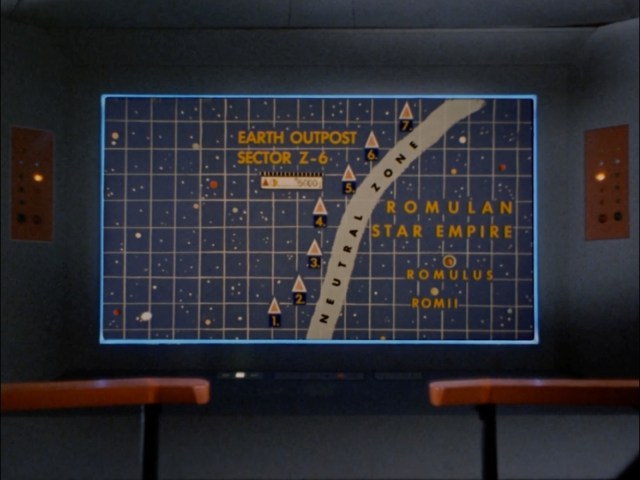 Spock brings up a map of the Earth Outposts, which line a neutral zone established after negotiations with the Romulans after the war. For either side to move into the neutral zone or attack would be grounds to start a war.

Shit gets real when the crew watches Outpost 4 get blown up with a Death Ray by an unknown assailant with advanced technology. Their ship is able to cloak itself and become invisible between attacks. 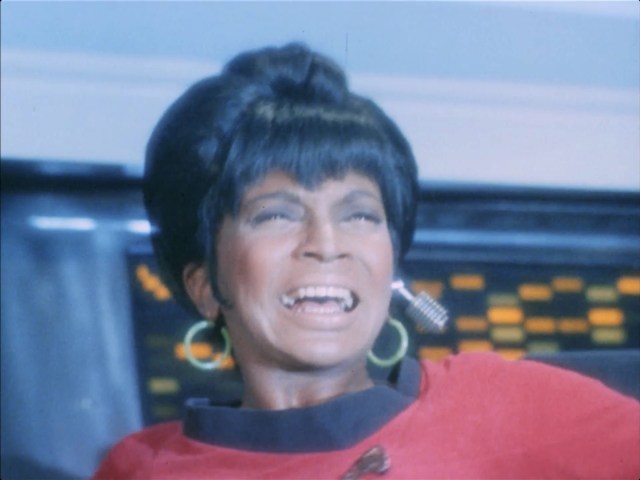 If Uhura‘s worried, then I’m worried too!

Kirk explains that it’s the duty of the Enterprise to do whatever it takes to avoid another war, even if that means that they’re “expendable.” 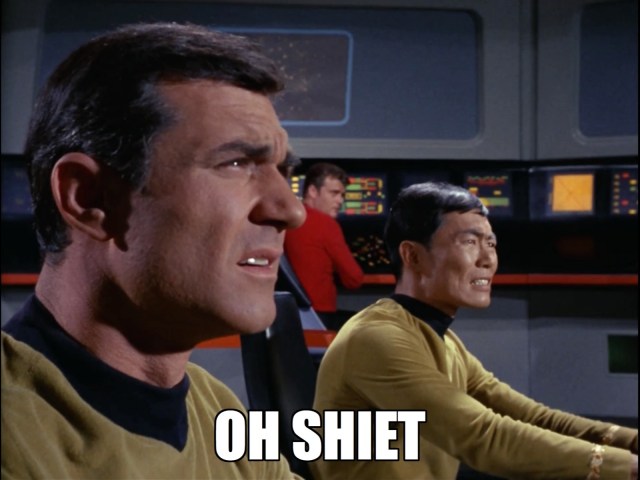 Things get tense for Spock real fast once Lt. Uhura and Spock establish a video connection with the Romulans. Everyone gets their first look at the Romulans and… 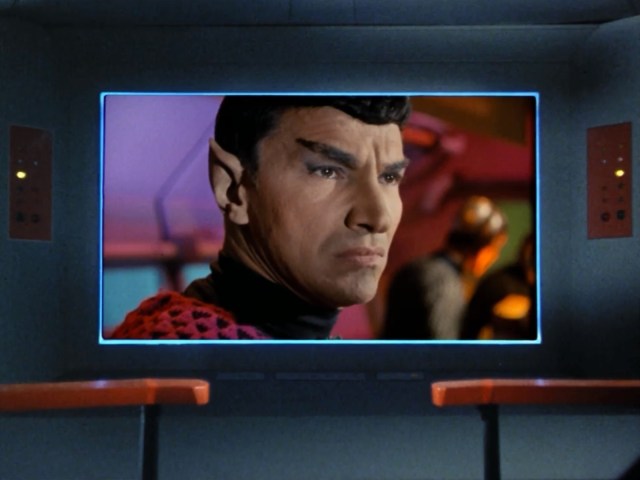 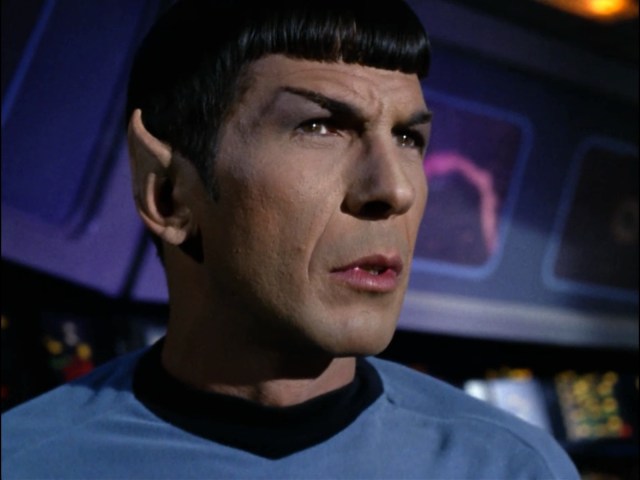 Oh hai Spock, this is totally awkward, but do you know that guy? Cuz you totally know all the people with pointy-ears in the galaxy, right? 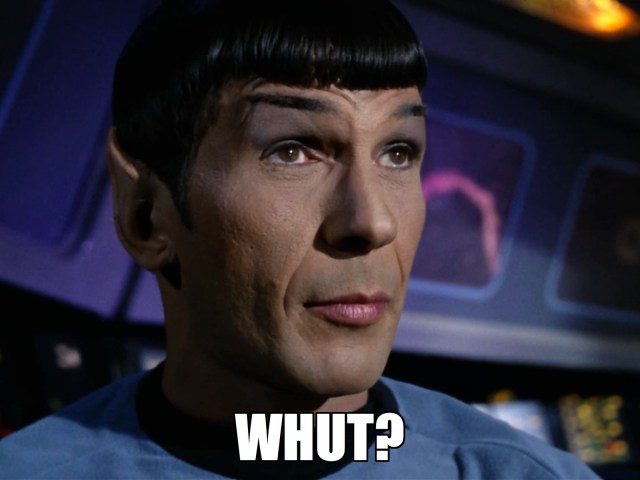 Lol no. Stop being racist.

Luckily, everyone avoids being an ass except for Lt. Stiles, who is convinced they have a mole on board. They receive an indecipherable code from the Romulans, and Stiles suggests that Spock can understand the enemy code. Kirk calls him out. “Leave any bigotry in your quarters. There’s no room for it on the Bridge. Do I make myself clear?”

War of the Minds

But what about the soon-to-be-married couple? They talk about their post-battle wedding plans. Also Tomlinson is Martine’s supervisor. Isn’t that like nepotism? Starfleet lets you be the boss of your fiancée? *shrug* 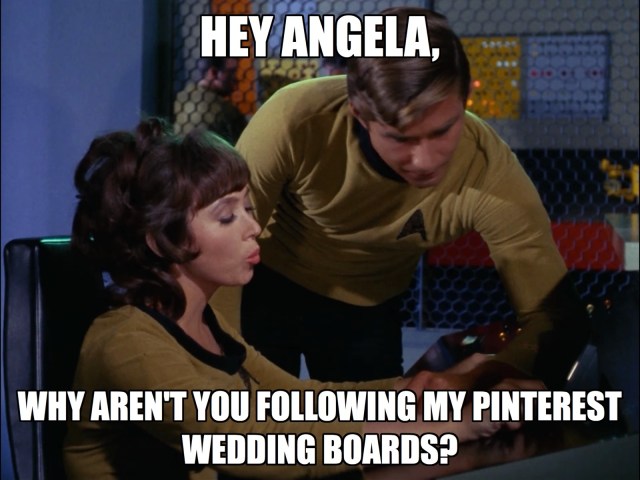 Meanwhile, the Romulans are trying to bait the Enterprise into attacking first, so that they can provoke a war while looking like the victims. The Romulans fly back toward the Neutral Zone, while the Enterprise shadows them. 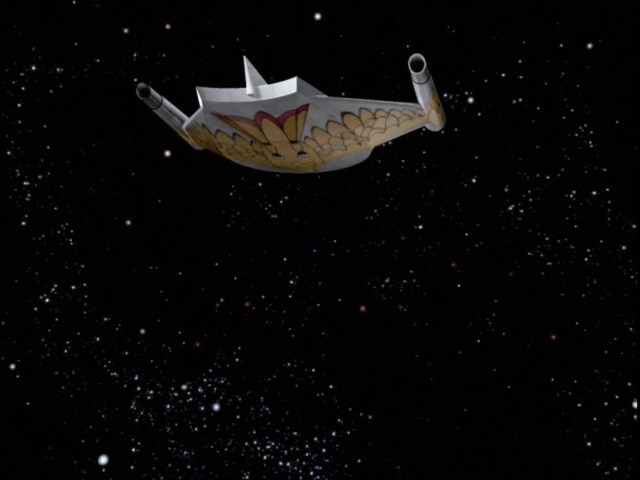 Our giant birdie flash art should intimidate our enemies!

It’s implied that the Romulans can’t get a visual on the Enterprise while they have the invisibility cloak on. However, they can detect each other with motion sensors. Since the ships can’t see each other, this will be a strategy test for both the Romulan commander and Captain Kirk.

Kirk decides to follow the Romulans into the tail of a comet, where the dust should make the Romulan ship visible. 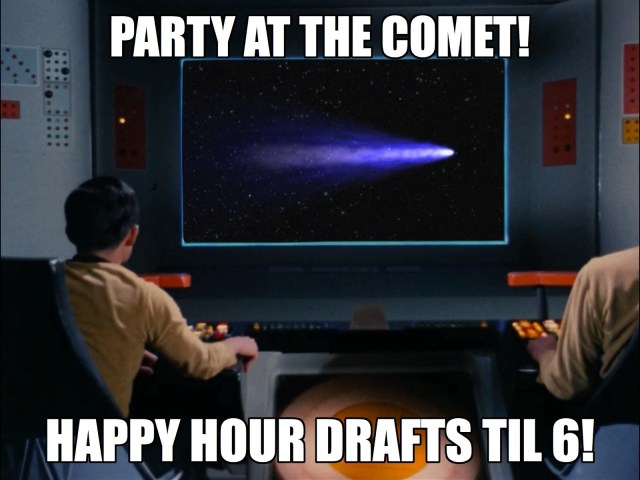 Unfortunately, Kirk realizes that they’ve just walked into a Romulan trap. They cross through the comet tail, and don’t see anything. Kirk commands the crew to spin around and fire blindly before they get lazered. His intuition works — they lands a few blows before the Enterpriser phasers overload. Spock rushes to fix it. 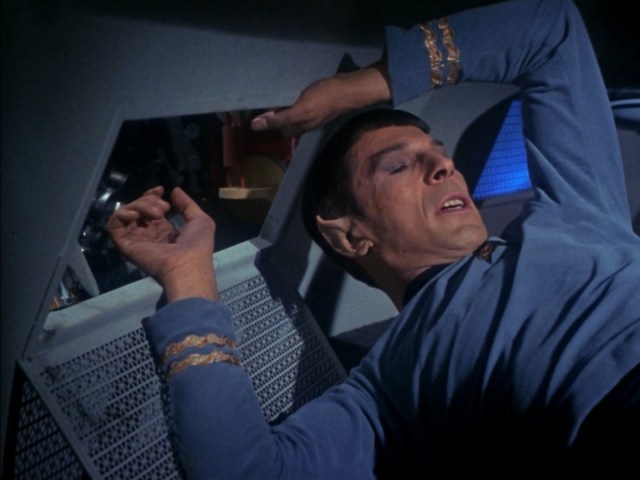 I better not hear any bullshit from Lt. Stiles over there!

The Romulan ship fires their Death Ray — you know, the one that took out an entire Earth Post? Kirk commands the navigators to retreat at warp speed, but the beam follows them. Impact is imminent, and everyone wonders if they’re about to die.

By the way, Rand has been chasing after Kirk this entire episode/season. Poor thing. 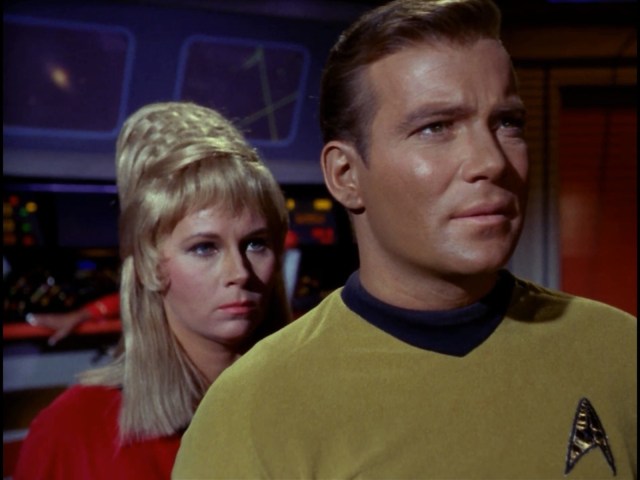 He doesn’t even notice me!

The beam hits them, but the distance has weakened it. This close call reminds Kirk not to underestimate his enemy.

Going on the Offensive

Kirk switches from his defensive-only strategy, and decides to hit the Romulans again while they’re still in Earth territory. Spock finishes up the repairs, but accidentally hits a panel button while getting up. This triggers a signal and the Romulans can detect their location. Stiles glares at Spock with suspicion.

The Romulans drop an explosive on the Enterprise, and Kirk orders that they hit it with phasers. The bomb goes off, killing 22 crew members with radiation. Eff.

Only a few phasers are still working, being operated by Tomlinson, the guy who’s supposed to get married. Stiles volunteers to go help with the phasers, and Uhura takes over navigation. 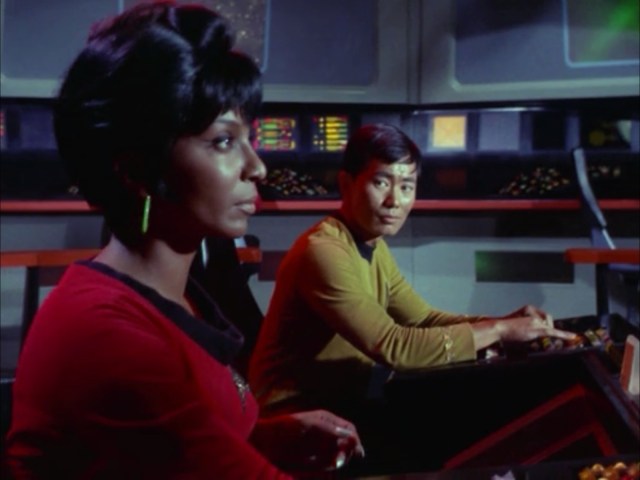 A reminder of why Star Trek TOS was so radical for its time. Two people of color, one of them a woman, piloting the Enterprise during one of its most important conflicts. This is one of my favorite stills.

The Tragic Path to Victory

Things go from bad to worse in weapons control. Spock rushes to help, and Lt. Stiles quips, “This time, we’ll handle things without your help, Vulcan.” The interactions between these two provide some interesting commentary on how race tensions can escalate during times of conflict. 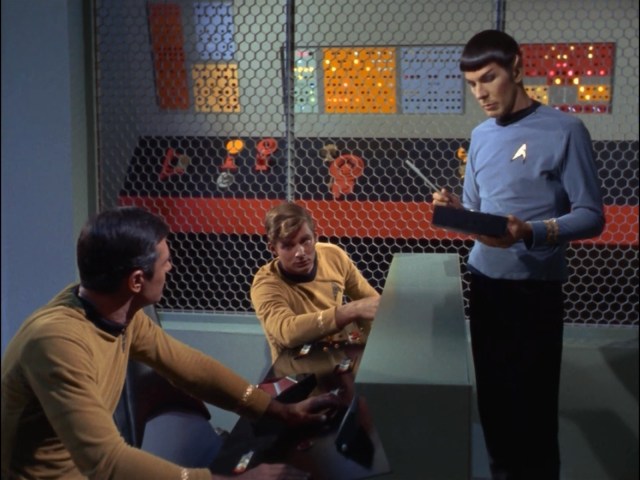 I’ll be sure to note your discriminatory insubordination, Lt. Stiles.

Unfortunately, a poisonous gas is leaking into the weapons room, perhaps a leak from when the Enterprise got hit with the Death Ray or the bomb. Stiles and Tomlinson collapse on the floor.

This is THE WORST TIMING EVER because Kirk needs the Enterprise to fire on the Romulan vessel, which is becoming visible and about to fire the Death Ray. Kirk screams, “Fire! Fire!” over the intercom, and nothing happens.

Spock rushes back to the weapons room. In a feat of epic heroism, Spock holds his breath, fires the weapons, and drags a crew member out of the purple gas. 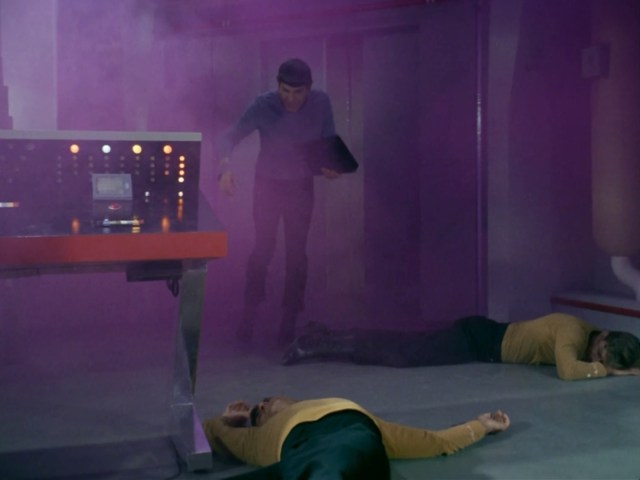 This is really the worst day ever.

The Romulan ship is totally wrecked, and Kirk establishes a Skype connection with them. He tells the Romulan commander to get ready to beam their survivors aboard the Enterprise, because that’s just how nice they are.

The Romulan commander weeps, telling Kirk that this isn’t possible. “I regret that we meet in this way. You and I are of a kind. In a different reality, I could have called you friend.”

So we learn that the commander really respects Kirk’s tactical skill, but he will never surrender. He walks over to a panel and self-destructs the Romulan ship.

In yet another tragic twist of fate, it turns out that Spock has saved Lt. Stiles, but he wasn’t able to save Tomlinson. 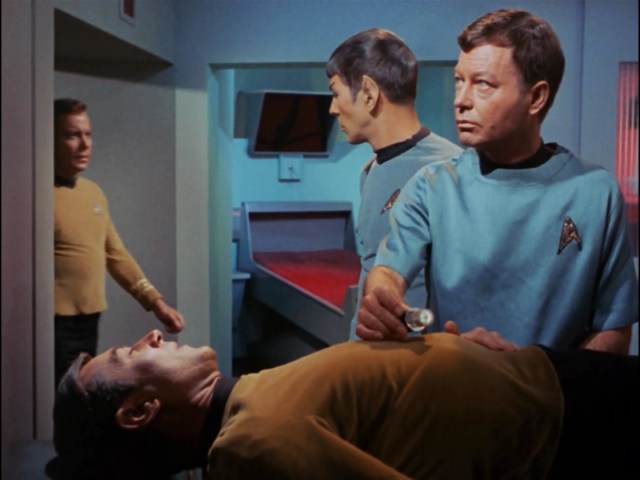 Stiles tries to heap gratitude on Spock by talking about his heroism. But the ever-humble Spock tells the Captain, “I saved a trained navigator so he could return to duty. I am capable of no other feelings in such matters.” Oh Spock.

Kirk must now check in on Angela, who is grieving over her fiancé’s death. 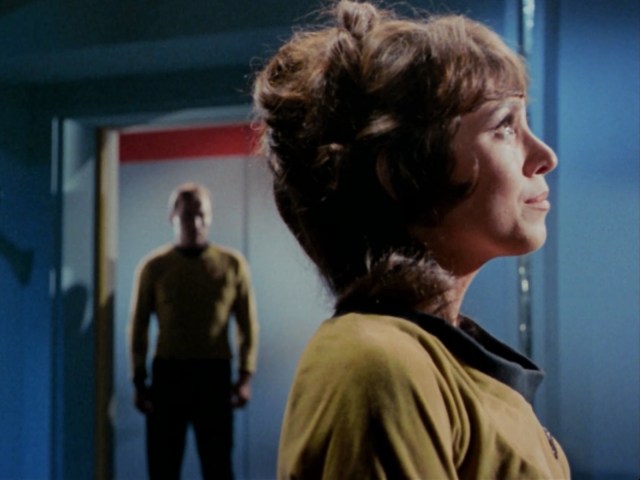 I don’t envy Kirk his job.

Friends, this was a HEAVY episode! We were hit by racial tensions, historical battles, Death Rays, and torn apart couples. Darn you Roddenberry!

And darn these onions!