The controversy this year began when organizers of South Boston’s annual St. Patrick’s Day parade once again refused to allow an LGBT group to openly walk and carry pride symbols in the parade. In a powerful open letter, the LGBT veterans  associated with MassEquality said,

We write first and foremost, to reject allegations made by the Allied War Veterans Council that we do not exist. … In 2010, the United States Congress repealed the discriminatory “Don’t Ask, Don’t Tell” policy, finally allowing lesbian, gay and bisexual service members to serve this country openly and with pride. We sought only to march with integrity behind the colors that represent our multi-faceted identities as veterans, LGBT people and, for some of us, as Irish-Americans. But we fought too long and too hard to be able to serve our country openly to retreat back into the closet in order to march in a parade. As we have stood shoulder to shoulder, in war and in peace, we would stand together again marching as a symbol of the freedom that we offered our lives for, a freedom for all people, of all colors, creeds, origins, sexual orientations and gender identities.

Although the struggle has played out unfavorably for 20 years now, this time, South Boston’s Club Cafe announced that they would no longer serve Sam Adams due to the brewers association with the parade. To the surprise of many, Boston Beer (parent company of Sam Adams) responded by pulling their sponsorship of the event after nearly a decade. “Our namesake, Samuel Adams, was a staunch defender of free speech and we support that ideal, so we take feedback very seriously,” said the company. 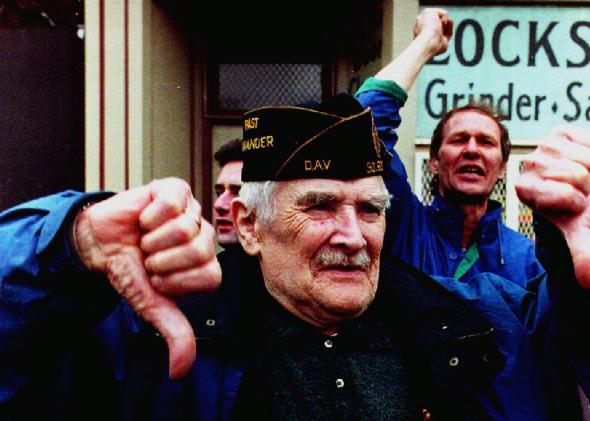 Spectators react to the Irish American Gay, Lesbian, and Bisexual Group of Boston during their appearance in the 1993 South Boston St. Patrick’s Day Parade. Subsequently, the Supreme Court recognized the organizers’ right to exclude groups. Photo by John Mottern/AFP/Getty Images via Slate.

Boston Mayor Marty Walsh also threw his support behind the LGBT veterans, saying, “The St. Patrick’s Day parade was born out of the celebration of Evacuation Day, a day set aside to recognize and honor our military and those brave Americans who have banded together for the sake of freedom. And so much of our Irish history has been shaped by the fight against oppression.” Welsh personally intervened to try and negotiate a deal to let the LGBT veterans walk in the parade; when organizers failed to budge, he announced that he would not be attending the parade on Sunday.

Similarly, New York Mayor Bill de Blasio will also be sitting out his city’s parade today. The Ancient Order of Hibernians, the organizers of the oldest St. Patrick’s Day celebration in the United States, have a longstanding policy of banning LGBT groups from marching. But this year, it just isn’t going to fly.

Shortly after Sam Adams’ decision on Friday, Heineken dropped its sponsorship of the New York City St. Patrick’s Day parade, saying, “We believe in equality for all.” On Sunday, the Stonewall Inn and other NYC bars announced that they would be starting a boycott against Guinness Beer over the company’s decision to maintain its sponsorship of the parade. Mere hours later, Guinness announced that it would be pulling its support. (“Guinness has a strong history of supporting diversity and being an advocate for equality for all. … We will continue to work with community leaders to ensure that future parades have an inclusionary policy.”) Stonewall quickly called off the boycott. 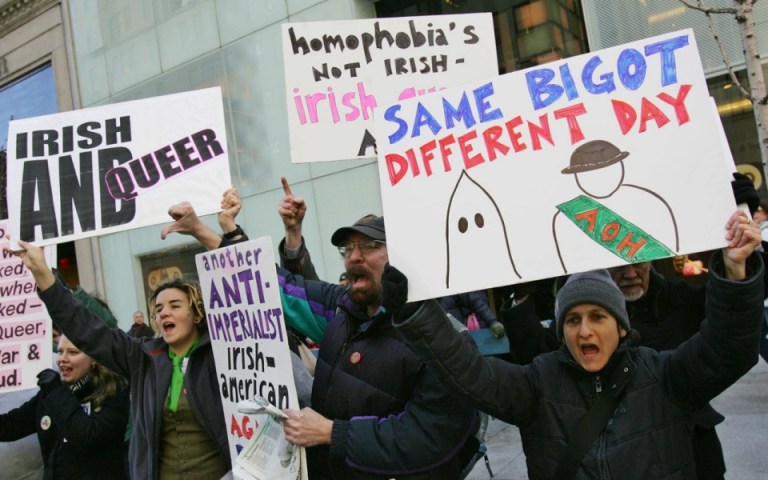 Protesters in 2006 demonstrating against the exclusion of Irish and Irish-American gay people from marching in New York’s St. Patrick’s Day Parade. Photo by Dima Gavrysh/AP Photo via Al Jazeera America.

Are Guinness, Heineken, and Sam Adams supporting LGBT people out of the goodness of their hearts? It’s possible. But it’s also likely that these companies’ decisions were business decisions based on media attention, fresh memories of the (somewhat misguided) Stoli boycott, and an eye on their bottom lines. It’s notable that boycott threats were required for these pullouts to occur; it’s a reminder that much like what recently occurred with SB 1062 in Arizona, corporate support of LGBT issues is tied to the money to be made from LGBT consumers, and that corporate action isn’t always going to be the best option for LGBT communities. Still, it’s a clear sign of the changing landscape of expected LGBT-inclusiveness, and the backlash that can arise from exclusion.