Whoever you are, no matter how lonely, you have cried to “Fast Car,” by queer musician Tracy Chapman. There’s a strong chance you have even cried to it in a public place, given that for some reason it’s often on rotation in the pre-packaged playlists of grocery stores and CVSs, a weird choice given that it is one of the most emotionally devastating pieces of art in recorded history. It’s like playing “My Girl” on repeat on the TV in the dentist waiting room. Better to engage with in the privacy of your own home! I am reminded of this deeply resonant tweet:

we need to regulate “Fast Car.” you can’t just spring that shit on me on a subway platform after a long day at work I might pack up and start a new life in Nevada

It is a sentiment apparently so widely shared, this unique terror of having to emotionally process “Fast Car” unexpectedly and in public, that it was actually almost impossible to find that above tweet because this is such a widely shared sentiment. 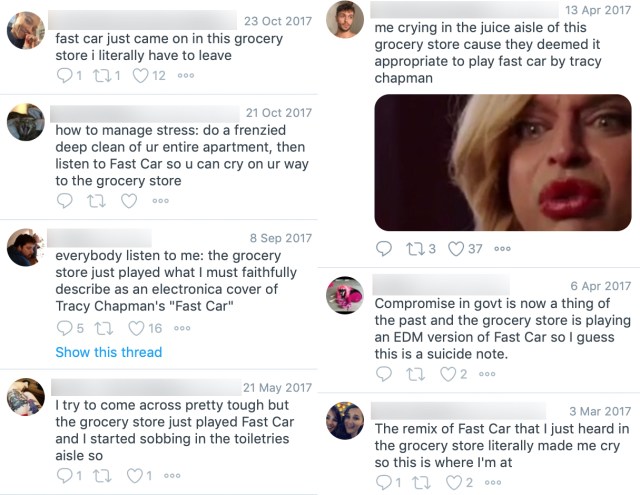 i did not even include ‘crying’ as a search term to find this, literally just ‘fast car’ and ‘store.’

While clearly “Fast Car” in particular has struck a chord with us as a species, for reasons that I feel we all intuitively understand without having to articulate them, it is not alone in this genre; I’ve been noticing more often recently how I think of some songs in the specific context of “wow I really hope I never have to hear this while I’m around other people, like say while I’m trying to pick out toilet paper on sale,” and yet also seem superficially benign and mainstream enough that they might plausibly get played inside a Walgreens or Cub Foods, like when I listened to Hootie and the Blowfish’s “Let Her Cry” while buying moisturizer last week. I live in fear of that moment. Here are some of them!

What is there to say about the power of Fast Car that hasn’t already been said by everyone and also your own heart? When we talked about our favorite songs by LGBT artists for LGBT History Month, “Fast Car” was prominently featured, and for good reason. I would accept arguments that a number of other Tracy Chapman songs could also take this slot, perhaps most notably “Give Me One Reason” or “Baby Can I Hold You” if I’m voting personally, and I am. Regardless, as the foundational example of this genre, “Fast Car” gets:

Full disclosure, this song is the entire reason I am writing this list. I put this album on unthinkingly while puttering about the house because I was dimly aware she had a new record out and all of the sudden this song is playing and once the lyrics actually penetrate my brain I’m like, sobbing into a sink full of dishes? There should be an FCC rating for this song specifically. Let’s not even talk about the video, I can’t deal with it. If anyplace I was patronizing played this song, I would not only have to leave immediately and never come back but cross the street when I walked by it for the rest of my life. I’m distraught just thinking about this. I just listened to this song again to write this and I feel like I was hit by a train.

Although not gay in conception or original execution by Fleetwood Mac (although writing an emotionally manipulative album about heartbreak while the entire band, composed entirely of couples, was breaking up was a very culturally gay thing to do) it became gay when Brittney and Santana performed it, obviously. Whichever iteration of this song and corresponding emotional landscape you are brought back to when hearing it (for me it’s actually the Dixie Chicks cover I find most devastating), we can agree it is not an appropriate choice for public spaces!

This song as an entire concept is like a reverberating hall of mirrors of upsetting emotions. The Leonard Cohen original is very sad; the Jeff Buckley cover, obviously extremely depressing; the Rufus Wainwright cover really tugs at the heartstrings; obviously for the purposes of our audience the kd lang version will really fuck you up. Regardless, again, of our unique and personal relationship we have with the secret chord that David played to please the Lord, it is not one that we should be navigating while trying to purchase tampons or a bag of Tostitos™ hint of lime chips.

Although this seems, again, to me like a choice obviously ill-suited to a breezy afternoon shopping or buying toothpaste, I feel like it gets some play around Christmas because it’s a ‘winter’ song that doesn’t specifically reference any religious holidays. While the Joni original is, of course, heartrending in its quiet way, something about hearing it sung by lesbians is uniquely emotionally paralyzing. Something about the kind of self-loathing and self-reproach embedded in looking back at a failed relationship is very gay and something that it’s just almost effortless to spiral into while spending 20 minutes in a Target trying to pick out a Christmas card for your parents who still call your girlfriend your roommate.

I was torn about which Melissa track to highlight here but Riese correctly indicated that the answer was “Breathe” — “the one that goes ‘it’s alright it’s alright, it only hurts when i breathe'”. Strong point made!

Obviously this is a limited and highly subjective list; please feel free to add to it by sharing the songs that you feel personally there should be a ban on playing in public. This is a safe space etc.