While we cheered never-before-seen trans TV characters, we mourned the nearly biweekly loss of a transgender woman to murder. While Caitlyn Jenner was featured on the cover of Vanity Fair, untold numbers of trans women were raped in prison and immigration centers. While Tangerine made history with its four Independent Spirit Award nominations, Houston overwhelmingly voted to take away civil rights protections because they didn’t want trans women to have access to women’s bathrooms.

We wrote more obituaries for murdered trans women in 2015 than TV recaps for any single show we cover.

Diverse on-screen representation and real world social change have always been locked in a symbiotic relationship, forcing each other forward, hand-in-hand. The percentage of Americans who support marriage equality, for example, has grown in almost direct proportion to the number of lesbian and gay characters on television. When GLAAD began conducting research for its Where We Are On TV report in 2006, they discovered that knowing a gay character was as effective as knowing a gay person in real life when it came to supporting positive legislative and social change for gay people. Why, then, did the reported number of murdered trans women nearly double the same year trans representation in pop culture took a revolutionary step forward?

Not All Visibility Is Created Equal

In May 2014, Time magazine featured Laverne Cox on its cover and declared that we had reached the Transgender Tipping Point, but it wasn’t until this spring when Caitlyn Jenner came out that trans people became truly visible to the majority of Americans. Yet, even without Jenner, 2015 saw a surge of trans visibility. Transparent and Orange is the New Black were critical and ratings successes, pulling down dozens of awards show nominations between the two of them, and receiving renewals almost as soon as their seasons premiered. We saw guest appearances on Faking It, The Mindy Project, and How to Get Away With Murder from trans actresses Laverne Cox and Alexandra Billings. Trans reality shows like I Am Cait, I am Jazz, and Becoming Us were readily available on basic cable. Glee showcased a choir composed entirely of transgender members, led by black trans character Unique. And Janet Mock’s MSNBC show, So Popular!, was so successful she became a coveted guest on nearly every talk show in America.

We wrote more obituaries for murdered trans women in 2015 than TV recaps for any single show we cover.

One of the most frustrating things about our rankings of all the queer TV storylines in 2015 was the disparity between trans storylines. Nearly all of them fall on the Really Good or Really Bad end of the spectrum, and when we dug deeper, we found that the most positive portrayals of trans women on TV were viewed by the fewest people. Unsurprisingly, streaming platforms — which have proven themselves monumentally more progressive than their broadcast and cable TV counterparts — produced the best storylines for trans women. Netflix’s Orange is the New Black and Sense8 both featured main characters who were trans women (played by trans women); and Amazon, of course, produced the critically lauded Transparent, which was not without its issues (a cis man playing the main trans woman, for example), but which learned and grew from its first season mistakes.

Of the 15 regular TV shows that told stories about trans women this year, only four managed to sidestep damaging tropes completely, and of those four, three of them (Blunt Talk, Penny Dreadful, and Faking It) were viewed by less than a million people. Conversely, the Law & Order: SVU episode “Transgender Bridge,” which actually allowed a respected character to argue that a man shouldn’t be charged with the murder of a trans woman because he was “confused by her,” was the second most viewed trans-themed episode of regular TV, raking in six million viewers. And the Pretty Little Liars summer finale, which revealed that the show’s shadowy villain is a trans woman, was viewed by three million people and was the most popular single episode of TV on social media in 2015. The Bold and the Beautiful became the only daytime TV show to feature a trans character this year, and it clawed its way through every horrible trope, painting its trans woman as a conniving impostor whose main goal was to dupe a rich man into marrying her, and allowing other characters to abuse her because of her duplicitousness. 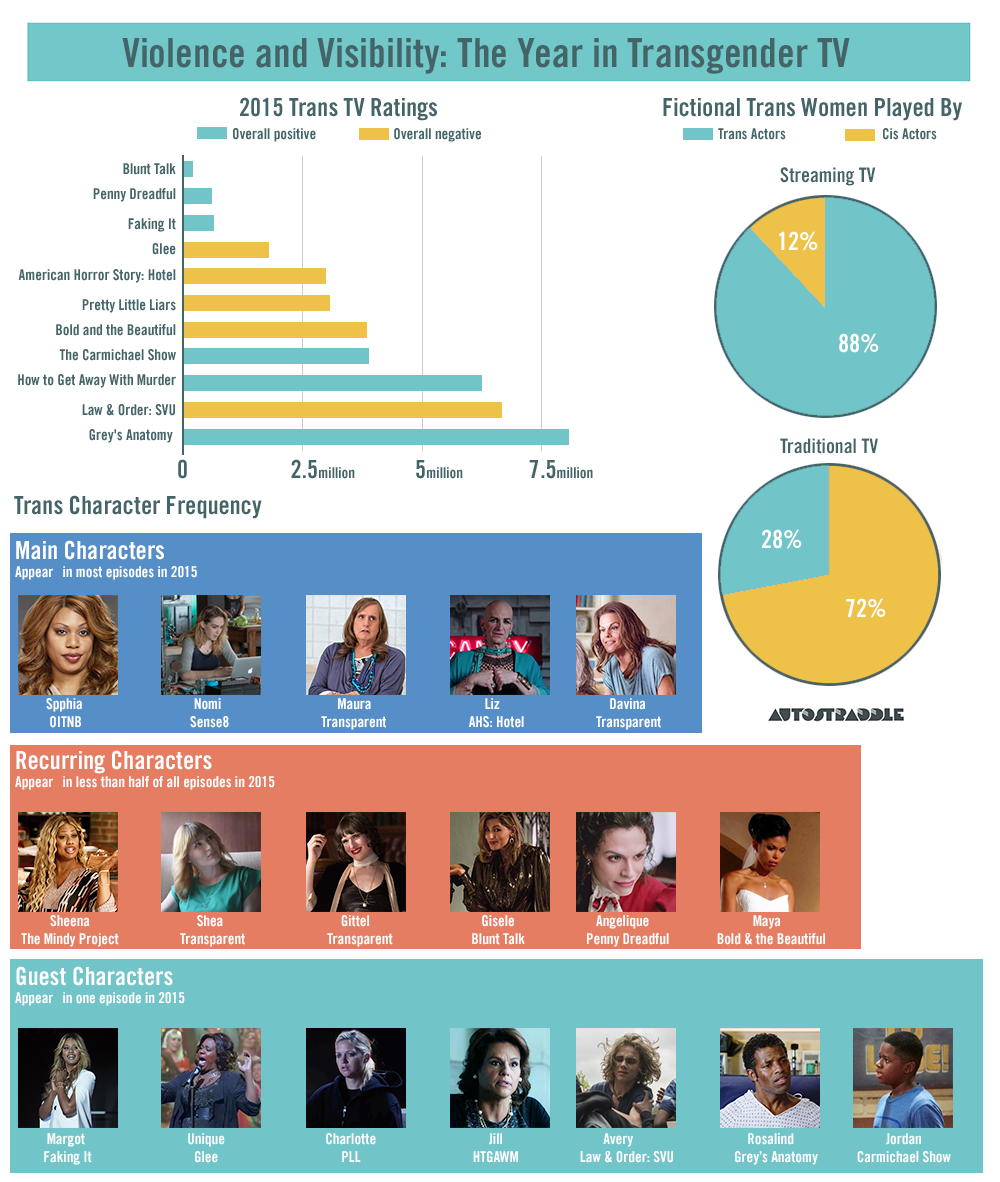 In addition to the scripted TV shows that featured trans women this year, we also saw an influx of reality TV shows about trans women. The most popular, of course, was Caitlyn Jenner’s I Am Cait, which expanded the Kardashian reality TV model to include a group of trans women who folded Caitlyn into their world and exposed her to the harsh realities many trans women — particularly black and brown trans women — face when it comes to attaining healthcare, housing, and career opportunities. The show went a long way toward introducing the audience (through Caitlyn) to trans topics they would not normally be exposed to, but it was not without its problems. For one thing, some of the trans women who appeared on the show were really unhappy with the editing, which chopped up and spliced together different moments to create drama in a way that wasn’t authentic. And for another, plenty of Caitlyn’s friends and family were shown misnaming her or misgendering her, or making transphobic jokes at her expense. Also, Jenner seems to be trapped in a dance where she takes one progressive step forward when it comes to queer community, followed by an enormous leap backwards. She is certainly not qualified to be the spokeswoman for trans issues in America.

Jazz Jenngings’ show, I Am Jazz, actually pulled in ratings similar to I Am Cait, and handled her story with significantly more aplomb. ABC Family’s Becoming Us had its ups and downs, ultimately choosing to focus more on the trans woman’s son than on the journey of the trans woman herself. And New Girls on the Block also featured trans women in a mostly positive way, though ratings for it were sparse on Discovery Life.

The Danger of Hypervisibility

While pop culture visibility is certainly important in pushing any movement forward, one of the biggest dangers trans women face right now is hypervisibility. There’s a growing pop culture buzz surrounding trans women and trans rights — though, devastatingly, that mainstream new coverage does not often extend to the pandemic of violent crimes committed against trans women — and people are beginning to form opinions and take action against trans women, even though they’ve never engaged with a trans woman in their lives. Many people also believe this hypervisibilty is contributing to increased intimate partner violence against trans women, as the men who date trans women lash out to posture for their friends in a culture of toxic masculinity. 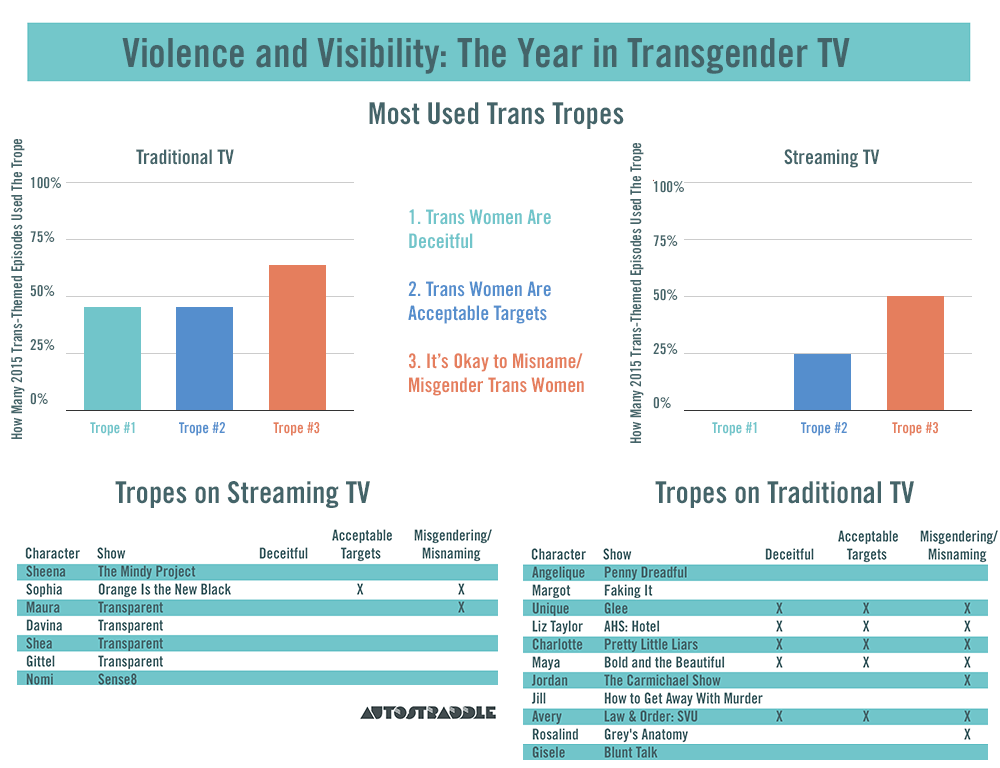 The New York Times recently reported on a similar trend in Nigeria, where the West’s push against anti-gay laws has actually contributed to a significant increase in violence against gay people.

America’s money and public diplomacy have opened conversations and opportunities in societies where the subject was taboo just a few years ago. But they have also made gay men and lesbians more visible — and more vulnerable to harassment and violence …  by groups of men, some of whom call themselves “cleansers.” … Before, a lot of people didn’t even have a clue there were something called gay people. But now they know and now they are outraged.

Conservative politicians and evangelical Christian groups have always scapegoated minorities to advance their agenda in the United States, and as it becomes less and less acceptable to target gay and lesbian men and women, you can count on those legislators and religious leaders to turn their attention toward trans people. See Houston’s Prop. 1, for example. It is remarkably easy to prey on the unfounded fears of majority voters who have no experience with the minorities they’re being taught to fear, and it makes matters infinitely worse when the majority’s fears are confirmed by the very few portrayals of that minority group they see on TV.

Visibility is terrifying when the people who see you want to do you harm.

The fact that Time magazine declared the Transgender Tipping Point over a year ago actually shows how far we have left to go. That the success of a very small handful of trans women and trans TV shows feels like a landslide victory only highlights what a deserted wasteland pop culture is for trans women. It also drives home the point that every single second of transgender representation on television matters. The sample size is still way too small to absorb the impact of irresponsible stories. What happens in our story boxes informs what happens in our hearts and in our homes and in our culture at large.

That the success of a very small handful of trans women and trans TV shows feels like a landslide victory only highlights what a deserted wasteland pop culture is for trans women. It also drives home the point that every single second of transgender representation on television matters.

In 2015, folks who were searching for quality trans representation on TV had a few really remarkable hours to choose from; but folks who will only become acquainted with trans women if they stumble across them on television were mostly exposed to tired tropes, damaging cliches, and men portraying trans women.