Be a HERO: Vote YES on Prop 1 in Houston

Even though Houston elected Annise Parker the first lesbian mayor of a major city in 2009 and re-elected her for a second time in 2011, Houston has been battling to implement an LGBT-inclusive nondiscrimination ordinance — that would protect sexual orientation and gender identity from discrimination in housing, employment and public accommodations — for more than a year. It would also protect 13 other distinctions from discrimination including race, ethnicity, age, military service and pregnancy. Today is the last day to vote for Houston’s Equal Rights Ordinance (HERO), or Prop 1 as it is written on the ballot, and Richard Carlbom, campaign manager for Houston Unites, a group supporting the ordinance, says today’s turnout could be the deciding factor for it to pass. 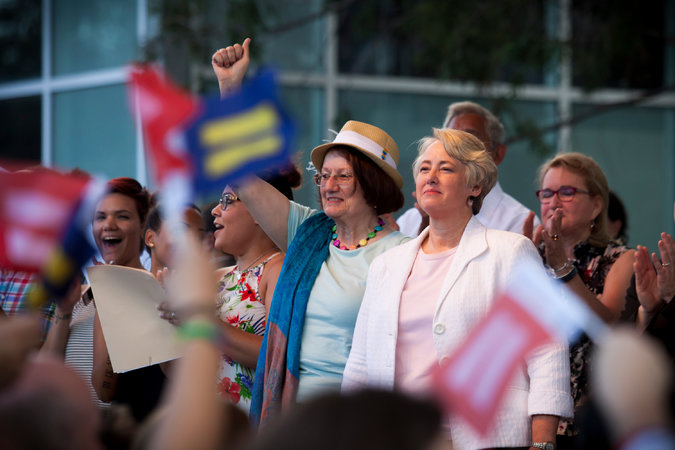 You would think passing a nondiscrimination ordinance would be a no-brainer in a huge city like Houston, but conservatives have waged a war against it, calling it the “bathroom ordinance.” Opponents of the ordinance have honed in on and aggressively attacked only one demographic: trans women, who they believe are “troubled men,” claiming they would use the ordinance to enter women’s restrooms in order to prey on women and girls. Groups against the ordinance have launched attack ads proclaiming, “Any man at any time could enter a woman’s bathroom at any time simply by claiming to be a woman that day.” Supporters of HERO note it’s already illegal to enter a restroom with an intent to cause a disturbance. Our dumbass governor Greg Abbott endorses this absolute garbage, even though other major cities in Texas like Austin (the city which Mr. Abbott resides in), Dallas, Fort Worth and San Antonio all have similar nondiscrimination ordinances.

HOUSTON: Vote Texas values, not @HillaryClinton values. Vote NO on City of Houston Proposition 1. No men in women's bathrooms.

According to a poll taken at the beginning of October, “43 percent of Houstonians supported keeping HERO, 37 percent were opposed, and 18 percent undecided, with a margin for error of around 4 percent.” It’s in a pretty dangerous zone of being split and in the worst case scenario the undecided could be swayed into opposing the ordinance to make it an overwhelming lose for us. Early voting has been at an all time high with a reported 133,000 voters who cast a ballot already, which is more voters than people who voted altogether in 2011. Experts believe this spike in early voting came from a high turnout from heavily Republican and African-American precincts.

Big businesses like Apple, General Electric, Hewlett Packard and nearly 60 other businesses have come out in support of HERO. The White House and both presidential Democratic front-runners Hillary Clinton and Bernie Sanders have come out in support of the ordinance. But in the end it’s up to the people to decide and right now it looks like it’s up to Houston’s youth to decide since only 1 percent of early voters were 18-24 year olds compared to 56 percent were 65 and older. It’s gonna be a super close call, y’all so if you live in Houston please go vote YES for Prop 1. It’s not only protecting you but loads of people in your city from potential discrimination when finding housing, being employed, etc. If you didn’t register to vote (it’s alright, man, but seriously do it next time, this is serious business), tell all your relatives, co-workers, friends, family to go vote.

Polls are open till 7 p.m. today. You can find a polling location here.

Other Municipal Elections Relevant to Your Interests

There’s a handful of other cities voting today on very important issues. For example:

+ Voters in Keego Harbor, Michigan will decide if adults “can possess small amounts of marijuana for recreational purposes on private property.”

+  In Salt Lake City, Utah the mayoral race is between incumbent Ralph Becker (D), who’s running for a third term, and former state lawmaker Jackie Biskupski (D). Biskupski has the endorsement from the Salt Lake Tribune, which is interesting for “the capital of a Republican state and the headquarters for the Mormon church” since she’s gay and would be only the second woman to be mayor.

+ In Colorado, voters will decided what the heck to do with $66 million in extra tax revenue from its sales on marijuana since it was legalized in 2012 in the state. The state law requires excess taxes to be given back to tax payers with an average of $8 per person. The Washington Post reports: “A ballot initiative is asking voters to let the state keep the excess tax revenue and spend it on school construction, marijuana education courses and youth-mentoring services. (A significant portion of tax revenue from pot sales in Colorado already goes to needy schools.)”

+ Three out of seven spots in Pennsylvania‘s Supreme Court are up for grabs which could result in one of the “biggest court shake-ups in recent history.” Pennsylvania is a swing state so this election could influence whether it leans Democratic or Republican.

+ Ohio could be the next state to legalize marijuana today, making it the first Midwestern state to do so. But what’s even more interesting is what happens if it does become legalized: Cultivating and selling it would be limited to 10 pre-determined farms in the state which would allow the owners/investors of these farms to form a monopoly. Advocates say that goes against what legalizing marijuana is all about. State lawmakers introduced their own ballot initiative known as the “anti-monopoly amendment” to prevent this from happening or anyone from “enshrining something in the state constitution for financial gain.”

+ In Virginia, all 140 state legislative seats are up for reelection and just a handful could change the power in the swing state.

+ Queer Undocumented Immigrant Project launched a campaign/survey called #NoMoreClosets to collect data on LGBTQ immigrants. The goal of the campaign and survey is to humanize and uplift the lived experiences of LGBTQ immigrants living in the U.S. and with the data they hope enlighten both the LGBTQ and immigrant movements in order to advance their efforts. “Because there is minimal data and little reporting done at addressing those who are both from immigrant communities and LGBTQ, the story collection campaign and survey will be critical to understanding how to create culturally competent work that reflects the issues of both communities,” states Carlos Padilla, QUIP coordinator of United We Dream in a press release. You can take the survey here.

+ Shared decision making, when a doctor’s advice and a patient’s reality converge, is the focus of a new study focused on LGBT people of color called “Your Voice! Your Health!.” The study is a collaboration between the Morten Group and the University of Chicago in the Chicago area. “Too often, LGBT persons, in particular LGBT persons of color, have not received the type of shared decision making that is the best that can be done,” Dr. Marshall Chin, the project’s principal investigator, told the Windy City Times. “So the goal of this research project is to try to understand what LGBT persons of color want in communication with their healthcare providers.”

+ In a yearlong investigation, The Associated Press looked into sexual misconduct by U.S. law enforcement and found “1,000 officers who lost their badges in a six-year period for rape, sodomy and other sexual assault; sex crimes that included possession of child pornography; or sexual misconduct such as propositioning citizens or having consensual but prohibited on-duty intercourse.” They’ve also pointed out that the number is an undercount since it only represents only those officers whose licenses were revoked and not every state takes action.

+ In October, police killed 95 people in the U.S. according to the Killed by Police database. Think Progress rounds up six of the most shocking police brutality cases that happened last month.

+ Hillary Clinton is polling at around 50 percent now that Joe Biden has declared himself out of the race. Bernie Sanders is trailing at 30 percent.

+ An LGBT rights group called Fair Michigan hopes to begin gathering petition signatures in order to amend the state’s constitution to prohibit discrimination on the basis of sexual orientation and gender identity. 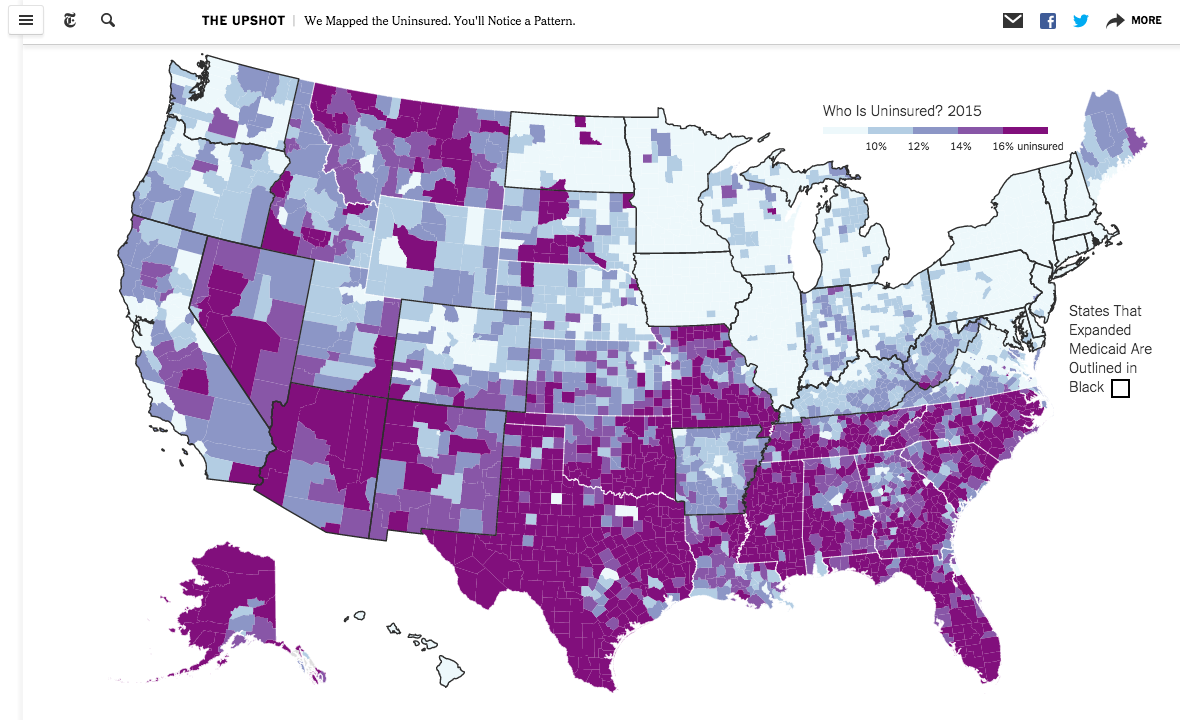 + The New York Times mapped the uninsured in the U.S. and found that most of them live in the South and are poor.

Laura‘s got some words for you about the first ever Women’s Freedom Conference.

Last Sunday, October 25, the inaugural Women’s Freedom Conference was held, live-streaming a full day of incredible programming by women of color from around the world. In her welcome address, organizer Feminista Jones explained:

Panels ranged from business tips on crushing it in the board room to personal narratives about stigma experienced due to mental illness to passionate freestyle chats on how to best empower trans women of color. And they were all so good. I think this conference is honestly one of the most exciting and important things to happen this year. Everyone should watch it. Seriously. Go now.

On-demand video replays and transcripts from the conference are available womensfreedomconference.com.