I stood on the sidewalk in front of the Lesbian Herstory Archives for ten minutes before coordinator Maxine Wolfe found me. I was early, because I had been worried about being late, and I knew as I saw her approaching me and the building that she was family. She seemed to know me in the same way, a gift I’m not always granted in queer spaces. We greeted each other and she invited me in. We climbed the stairs of the brownstone together, and when she opened the door we discovered Saskia Scheffer, the other coordinator I was scheduled to meet that Sunday, was already there. 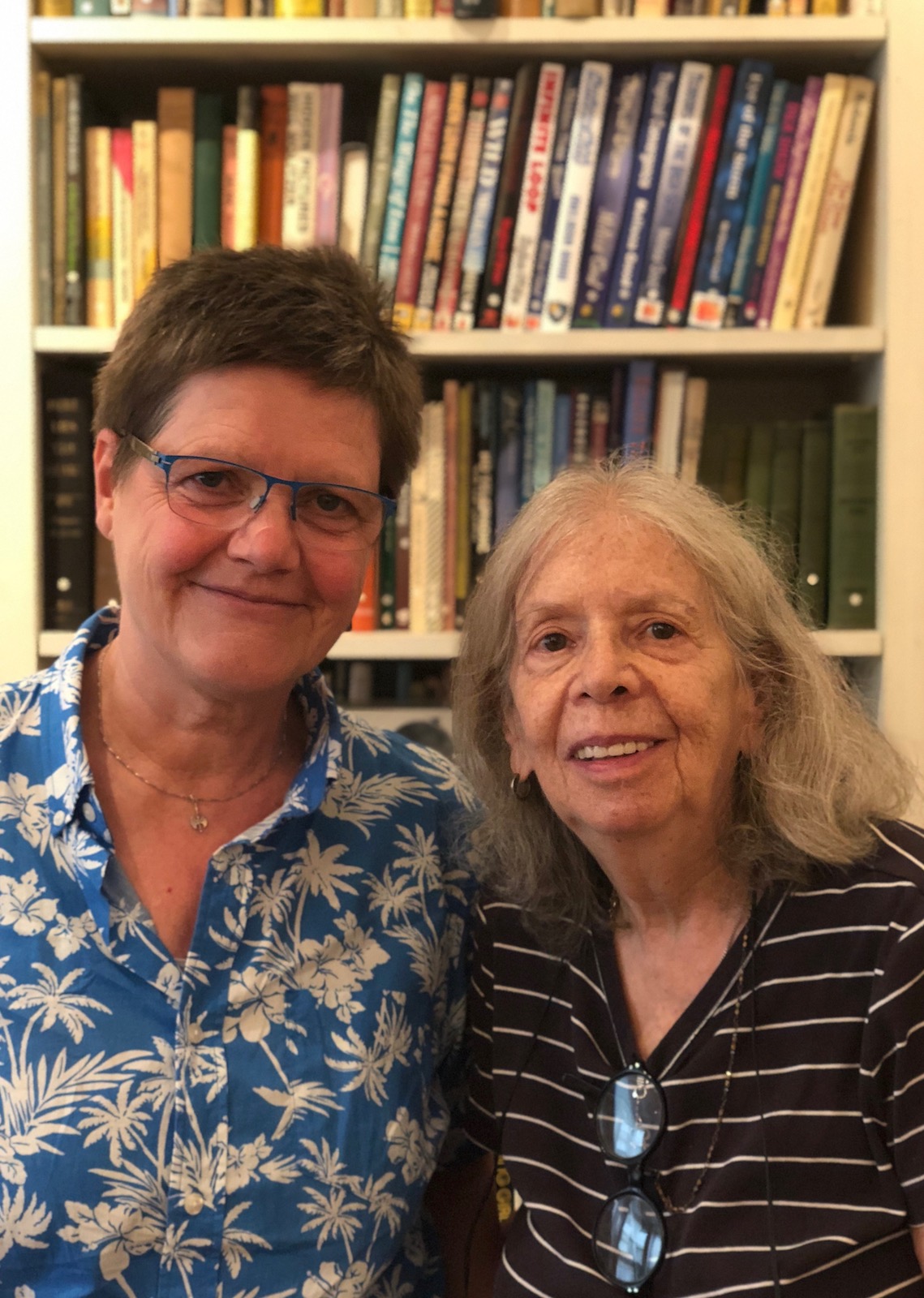 Saskia and Maxine, my guides at the Lesbian Herstory Archive

I hadn’t visited the building since I last lived in New York five years ago, but I immediately felt at ease. We sat down at a long table in the dining room and Saskia offered me some grapes; we chatted about Southern Oregon and the rural land dykes I used to live with; Saskia asked me how exactly she and Maxine could help me.

Saskia and Maxine nodded, both agreeing that examining some primary sources would be much more fun than sitting at a table “trying to tell you everything that’s ever happened to us in ten minutes or less.” My friends Dana and Lydia showed up and the five of us climbed a staircase leading to a small room filled with carefully labeled cardboard boxes and filing cabinets. We chose two collections to look at: the Angela Calomiris boxes and the Lesbian Avenger boxes.

“Wow,” I breathed, as Saskia lifted the lids off the Angela Calomiris boxes, and she smiled.

Angela Calomiris was a lesbian FBI informant, and I know a little bit about her story because we’ve written about her on Autostraddle. But suddenly I was holding a file folder filled with her personal papers. A red beret in a clear ziplock bag sat neatly on top of the folders. I asked if Dana could model it for me, Saskia confirmed that she could, and then my sweet queer friend was standing in a brownstone in Brooklyn in 2018 modeling a beret that belonged to a morally questionable lesbian in the 1940s.

“It’s always ‘wow’ when we look at the collections,” Saskia said. Maxine nodded and explained that one of the goals of the archive is to make it so that any lesbian can find an image of themselves housed in this space. “We don’t keep people out just because they don’t fit our point of view.” 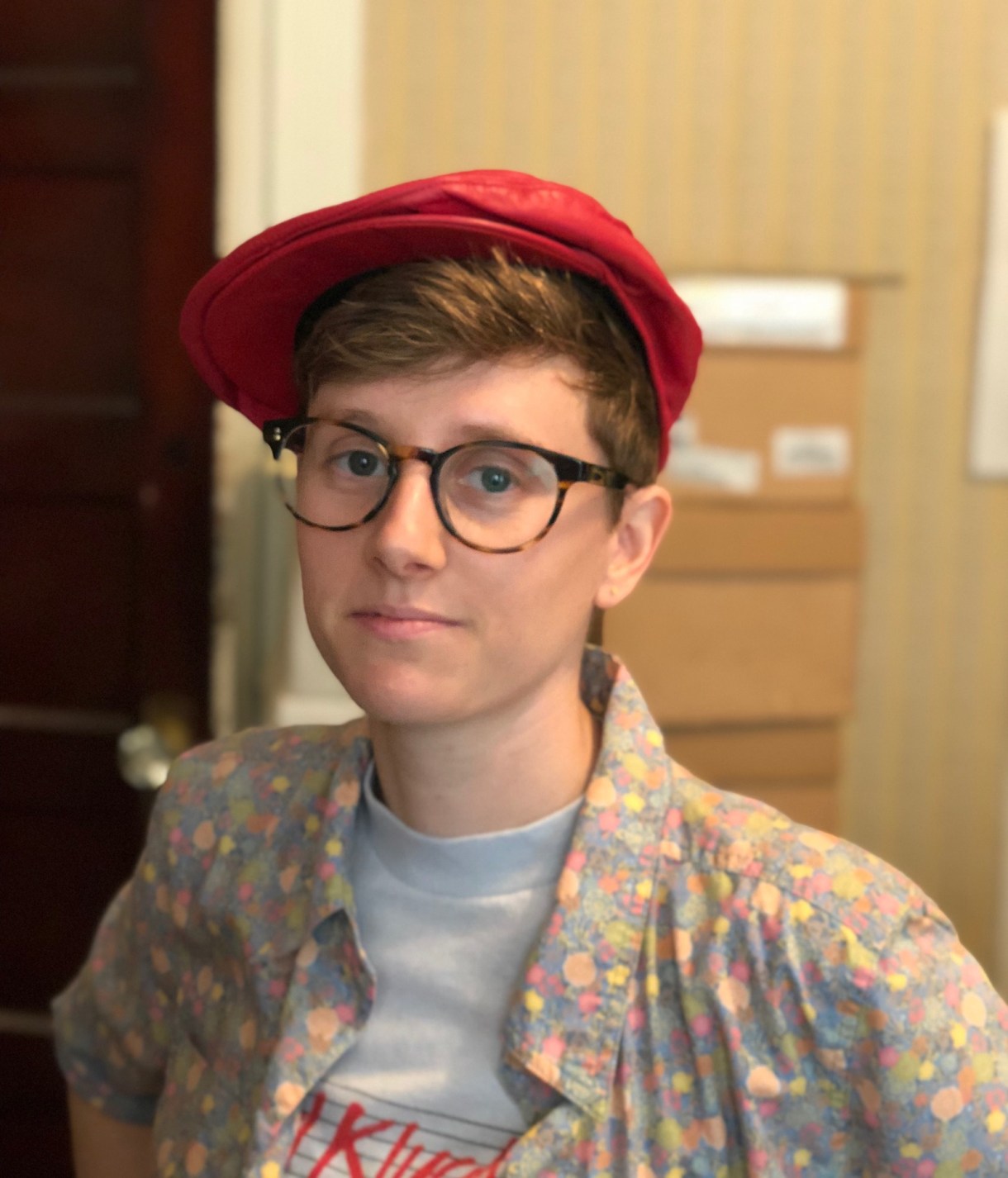 As I reported in June 2012 in the first article I ever wrote for Autostraddle, The Lesbian Herstory Archives: A Constant Affirmation That You Exist, the Archives contain the world’s largest collection of materials by and about lesbians in a beautiful brownstone in Park Slope, Brooklyn. These materials include books, newsletters, photographs, unpublished papers, periodicals, zines, audio-tapes, CDs, records, DVDs, videos, t-shirts, buttons, banners, and more. The Archives no longer keep all of their materials in the brownstone itself; there’s so much to store that a lot of it lives off-site. Our herstory is so large it doesn’t fit in the confines of this large home.

I say home because the Archives aren’t just a building; there’s always a caretaker living in the brownstone, which “makes it a home, not just an institution,” Maxine said. The place certainly feels like a home — non-descript on the outside, when you walk in you’re greeted with a large open library, complete with a comfortable sofa to do some reading and a ladder to reach the books on the highest shelves. There’s a dining room and a kitchen area, and upstairs are the rooms filled with treasures like the collections Saskia and Maxine shared with us. 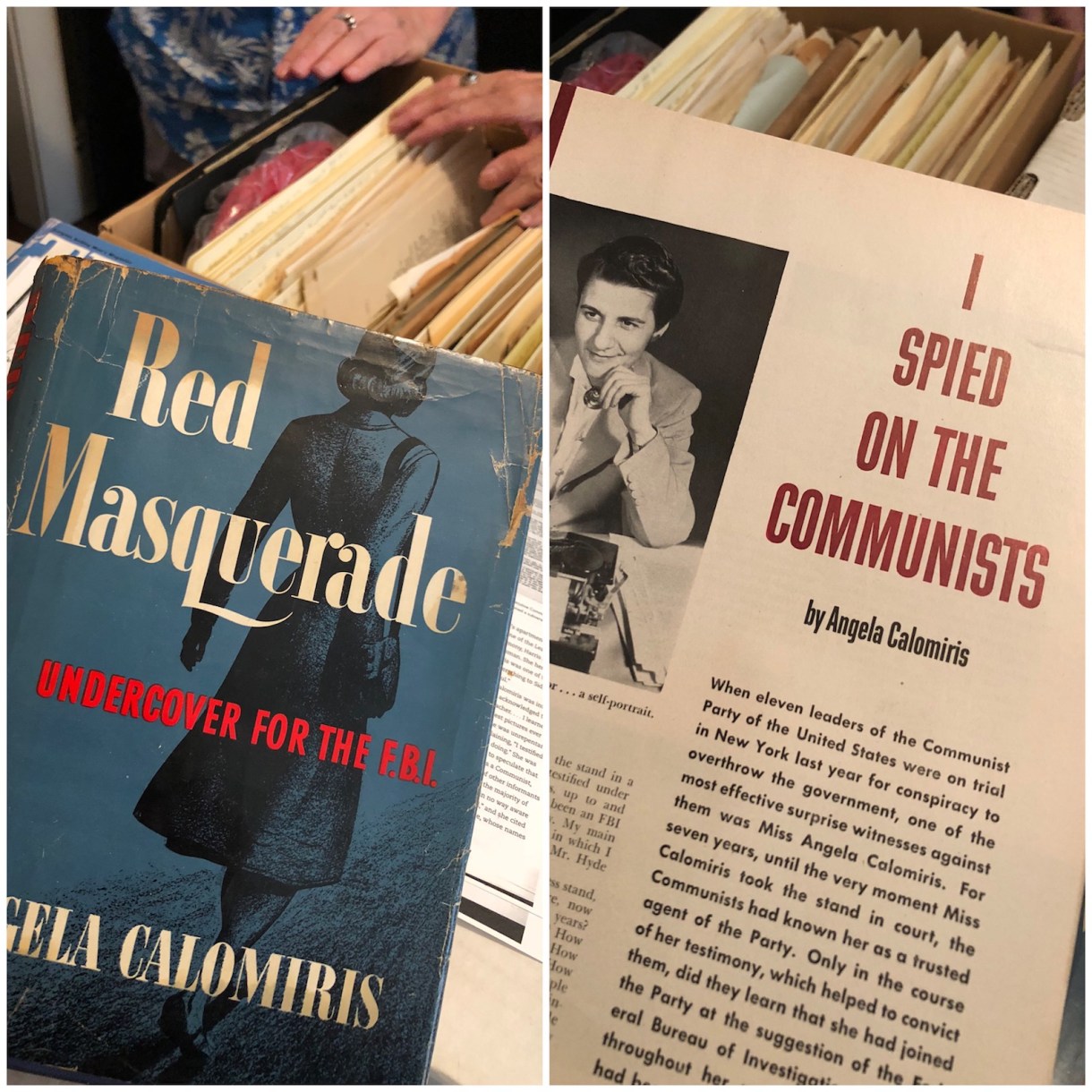 After we put the Angela Calomiris boxes away, we moved on to the boxes carefully labeled “Lesbian Avengers.” These boxes told the story of a dyke activist group defeating the Christian Right in Rural Idaho through direct actions and on the ground organizing. While Saskia stepped back to photograph the flyers and newspaper clippings we were now all poring over – she’s in charge of the Lesbian Herstory Archives Instagram account and is always thinking about the next item she might post online – Maxine explained in what it was like being a part of the Lesbian Avengers in the early 90s. She spoke with authority and I could easily imagine her 25 years earlier: renting a house in Lewiston, Idaho with her fellow activists and organizing with the local lesbian and gay community there, going door to door, hosting pancake breakfasts, phone banking, and eventually defeating Proposition One. 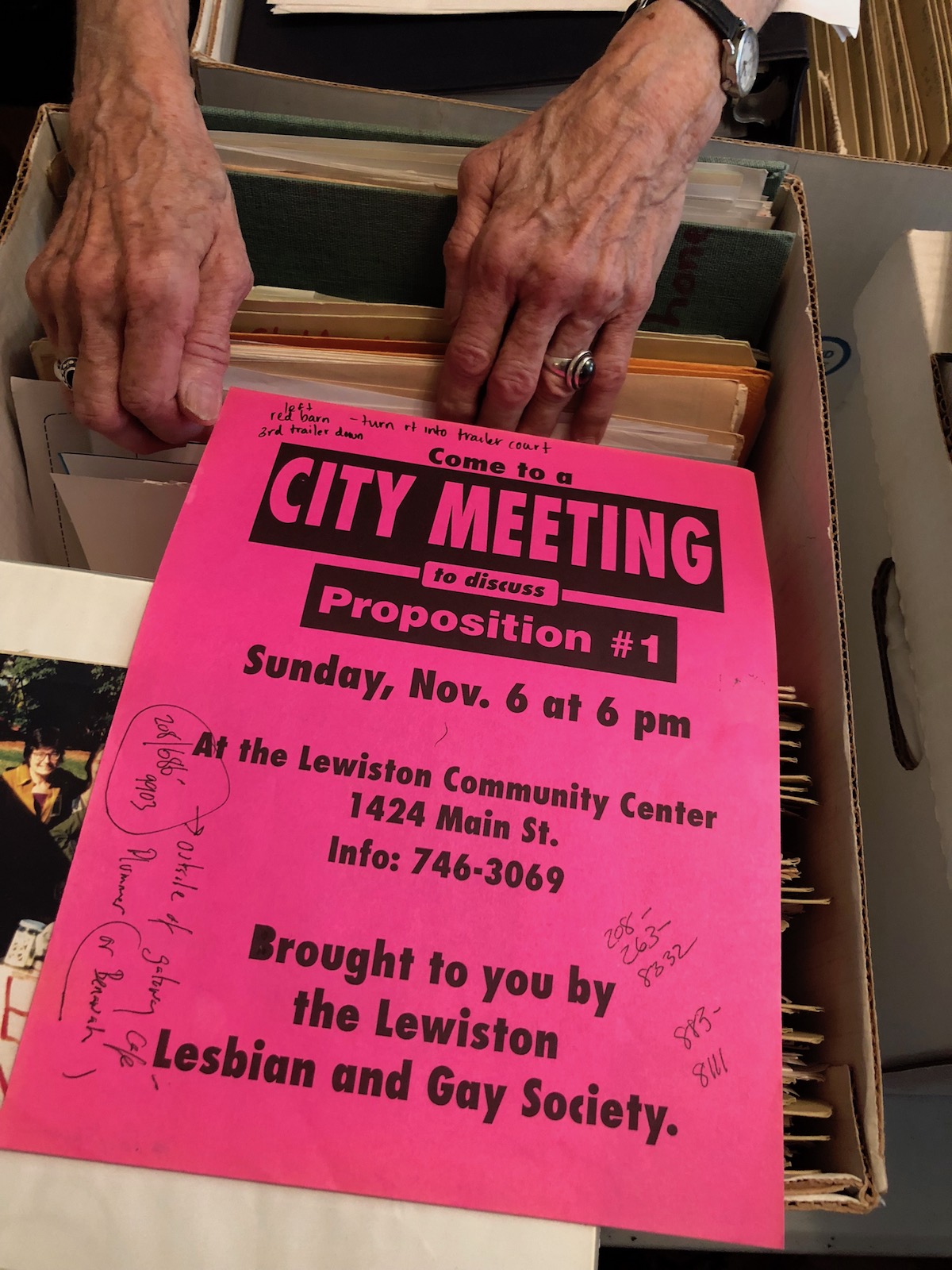 “How did you get involved with the Lesbian Avengers?” I asked her, feeling inspired and wondering which group I might join in 2018 to best lend my activist energy. That’s when Maxine told me she was one of the founders.

Saskia chuckled from her corner where she was photographing a large newspaper ad and spoke affectionately: “Max is a starter,” she said.

My embarrassment was overshadowed by the jolt of emotion at hearing the tender, casual tone Saskia used to say “Max.” How long had these two women known one another? What had they witnessed each other accomplish? How awesome to witness such love, such herstory, in real time. I chose to let my embarrassment fall away, let gratitude wash over me instead. 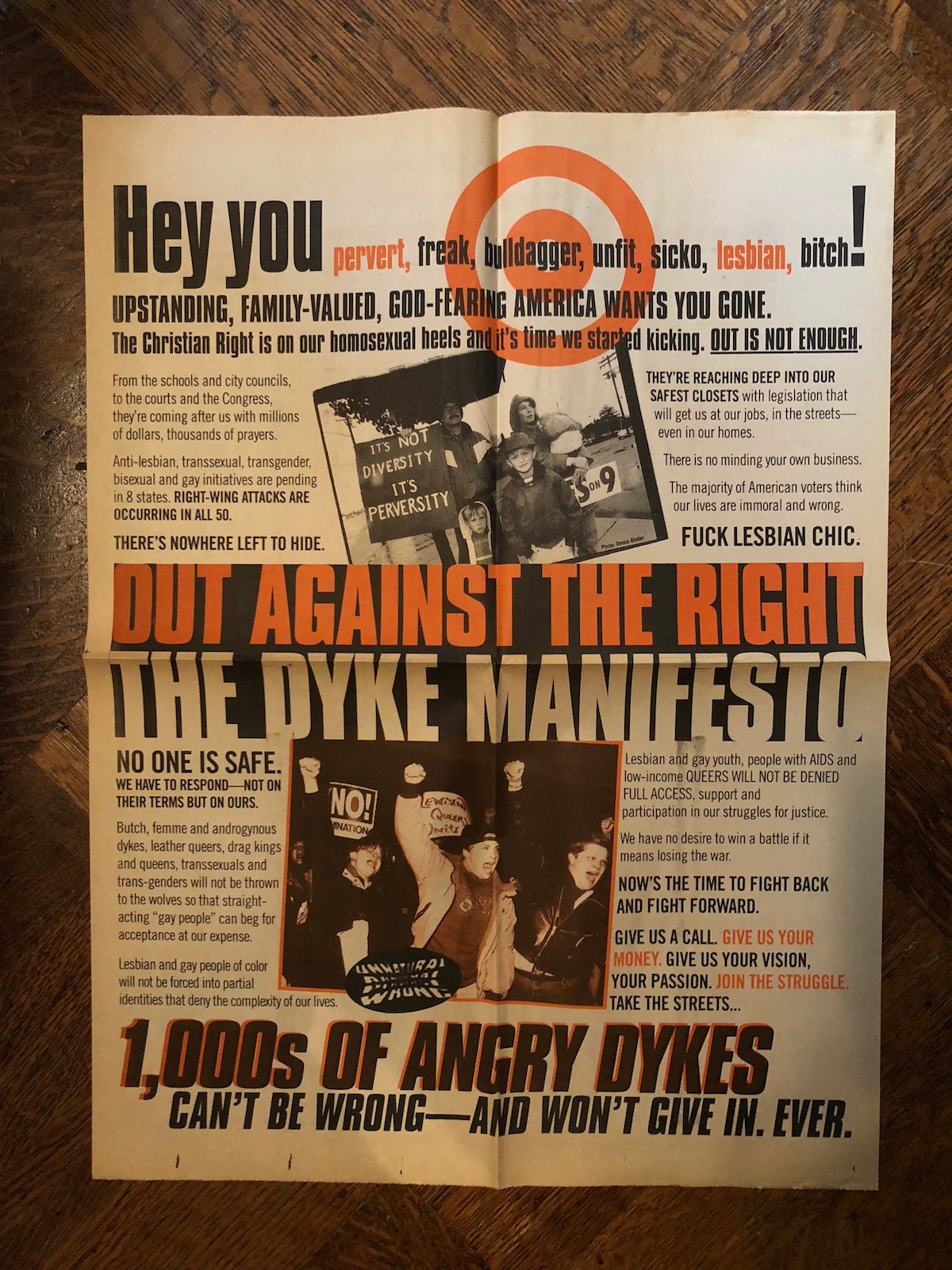 It was Sunday, October 7. Less than 24 hours earlier, Brett Kavanaugh had been confirmed to the Supreme Court. Dr. Christine Blasey Ford had told the truth, just like Anita Hill had told the truth in 1991, and three decades later the people in power still hadn’t listened. We were almost two years into the Trump presidency. Later that day I would read the alarming article in the New York Times titled “Major Climate Report Describes a Strong Risk of Crisis as Early as 2040.” Things were objectively bleak, is what I am saying, the Sunday afternoon I visited the Lesbian Herstory Archives. There have been many bleak days since then, and it’s still October. It’s currently hard to find joy, hard to hold on to hope, hard to allow ourselves to let our guards down.

There I was, in a tiny room crowded with boxes upon boxes of special collections at the Lesbian Herstory Archives in Brooklyn, NY. There I was, with two queer friends close to my own age and two lesbian elders who have been fighting for our rights and paving the way for our community to exist since before I was born. There we all were: marveling over our herstory together, being sweet to each other, making jokes that would only land within our community, treating each other like family. Our elders are still around, and they still want to tell us all that they know! Our youth is here and queer and hungry, and we still want to show up to connect and learn and share and grow! We have a common herstory, and it is both tangible and ethereal, housed in a brownstone in Brooklyn and on digital platforms like Instagram, it is precious and sordid and hilarious and brilliant. It is kept safe by a collective, and the collective is all of us.

Things are objectively bleak, and yet. 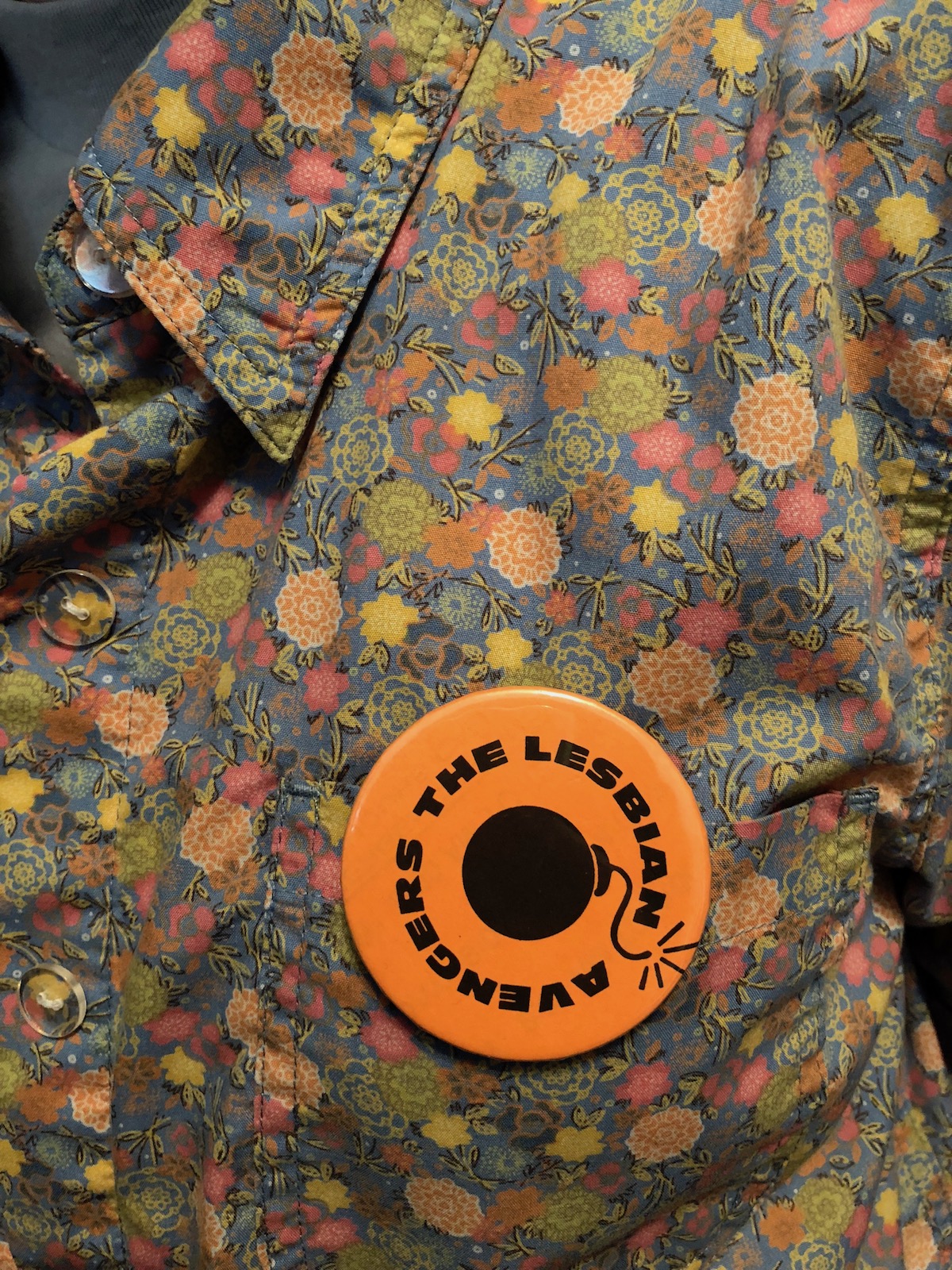 Dana was extremely good natured and modeled everything I asked her to put on her bod, thank you Dana

As we continued looking through the materials in the special collections, Maxine told us more about the inception of the Lesbian Avengers — “[A small group of us] made a commitment to each other that we would do an action no matter what, because somebody had to do something! We agreed not to bring it down to the lowest common denominator of what everyone [in a large group] was comfortable with because if you do that, you never get anything done and it’s boring!” – and about volunteering with the Archives.

When the project began in 1974, as a small collection housed in Joan Nestle’s personal apartment on the Upper West Side, the goal was for lesbians to preserve their own personal herstories. Being in charge of the process would ensure that they would have control and their stories would not be misremembered or erased. Now, almost 45 years later, in an effort to remain true to the original mission, the coordinators of the Archives still offer volunteer trainings for women interested in helping with the work. These trainings can center around one day projects or can delve into deeper work – if a volunteer has time and interest, one can learn a myriad of archival skills like processing and cataloging.

Dana and I made eye contact while Maxine described these volunteer sessions.

“We’re coming back,” she whispered to me.

“Literally as soon as we can,” I whispered back. 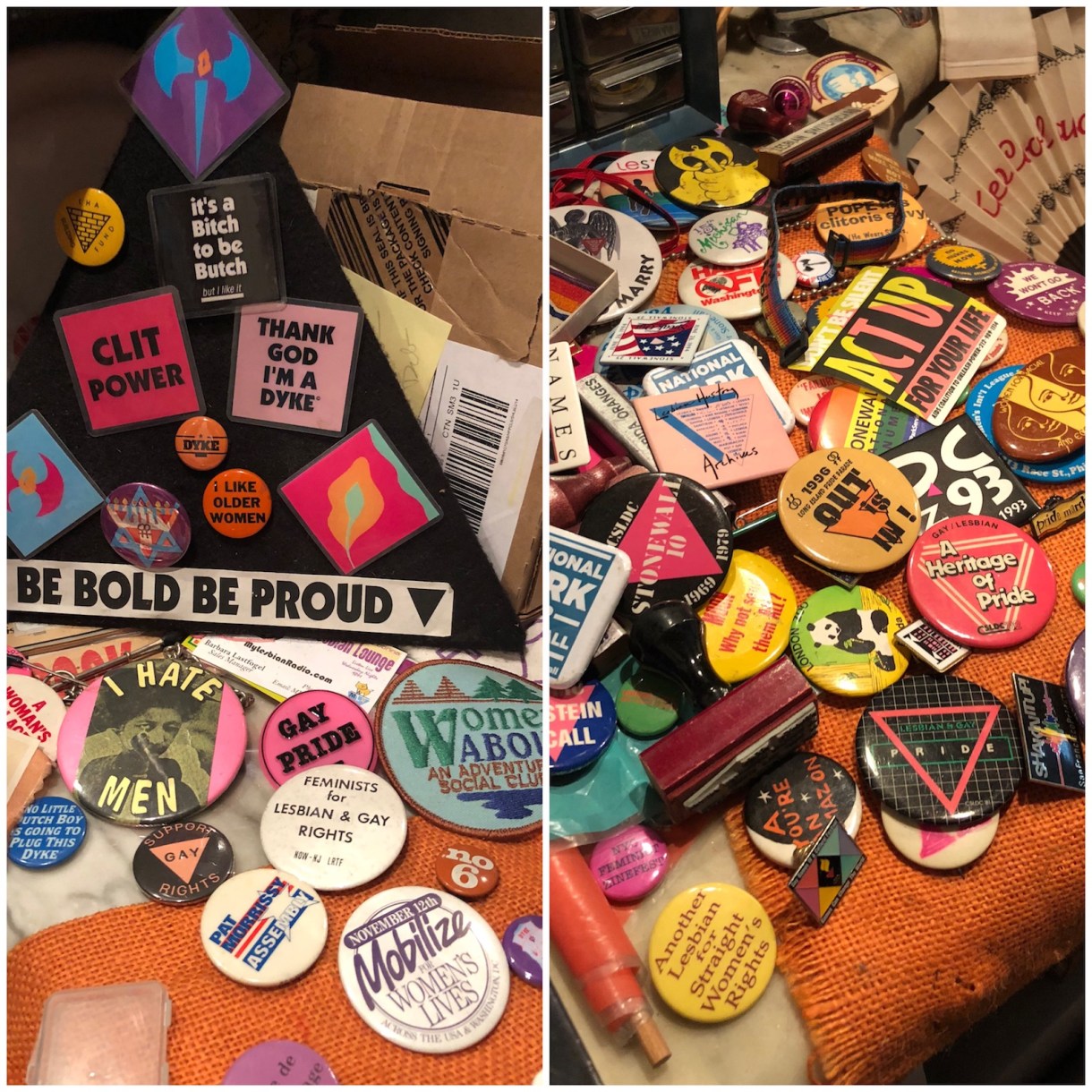 A portion of the button collection at the Lesbian Herstory Archives

Before we left the special collections room, Lydia asked if there were any Greek collections, as that was of special interest to them because of their family background. Saskia quickly procured a folder that fit the bill. I knew I would be blown away by the magic held inside the walls of the Lesbian Herstory Archives, but I’d somehow forgotten the thrill I feel by the magic held inside every older lesbian I’ve ever met. Lydia looked through the Greek folder as my gratitude grew.

We visited the publication room, where volumes upon volumes of every lesbian publication you can imagine live in carefully organized green boxes. We gushed over the button collection on display in the narrow hallway leading from the special collections room to the publication room, and eventually ended our visit back downstairs in the library, where we were delighted to discover a “Lesbian Money” stamp next to the donation box. 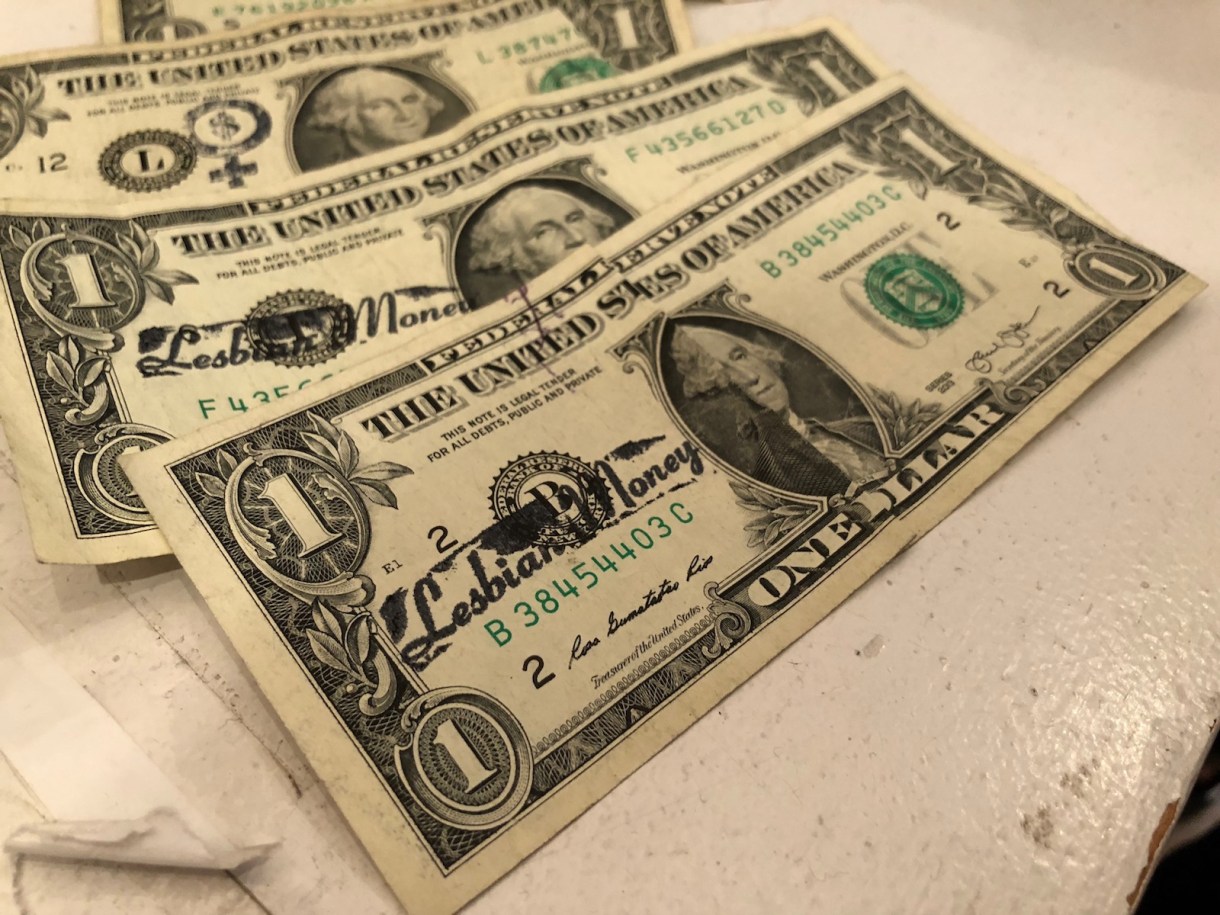 Is it a crime to decorate a dollar bill or is it art? Does it matter?

It was time to go – Saskia and Maxine had plans in Manhattan and Dana and Lydia and I were meeting some other queer babes at Ginger’s in Park Slope – but I didn’t want to leave. I’d wanted to share primary sources with Autostraddle’s readers, in an effort to bring the magic of the Lesbian Herstory Archives to a larger audience. But I’d barely scratched the surface of two special collections, and yet the magic was infused in the entire afternoon. We hugged goodbye, and I had Dana take a photo of me sitting on the front steps of the building before we walked away. 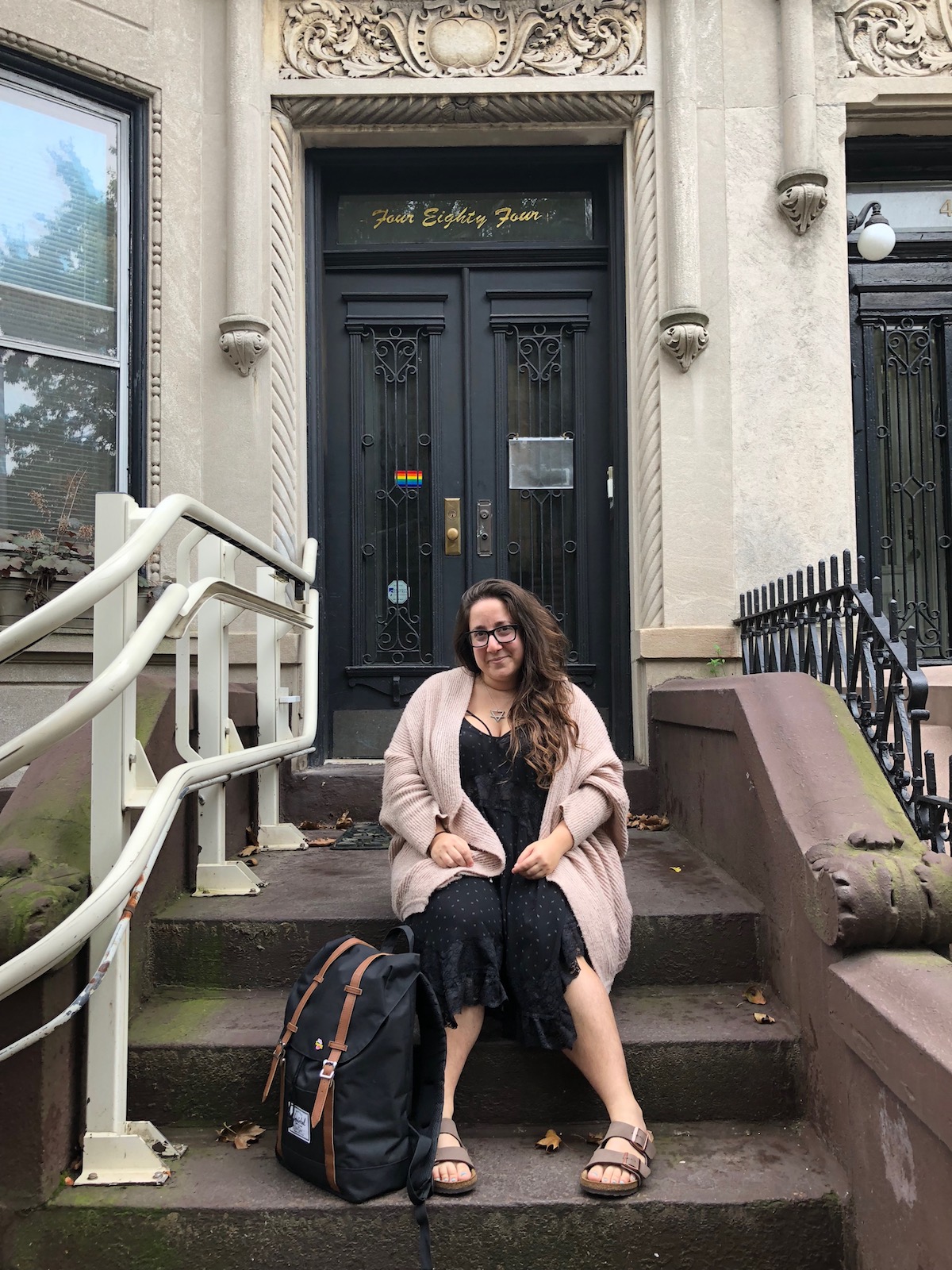 And yet. I look so calm in the image. I look happy.

Vanessa has written 373 articles for us.