How goes it, candy corns? I’ve missed you. This past week I’ve been busy burning kale chips, crafting adult-sized ninja turtle costumes and working “Frankenstorm” into as many conversations as possible. (Because best storm name ever, right?) Speaking of Franken-stuff, do you weirdos have Halloween plans? Do you want to? We’ve got you covered with how-tos for crafting 90s, last-minute or couples costumes. Also face painting  and tiny Halloween treats!

Elsewhere in the ‘straddleverse we told some o.b.® tampon tales, Dapperq offered style tips for suits plus general fashion advice and we introduced our talented new interns!

With the election at our fingertips we talked more politics w/r/t  the debate, early voting, the Log Cabin Republicans and what a Romney presidency could mean for women. And though you might not need a bunch of hipster celebs encouraging you to vote, it’s nice to know they’re willing to do it anyway.

Now let’s see who said the best stuff this week. These are the commenters who’d get the jumbo-sized candy bar if they ever came trick-or-treating at my house.

On Listling Without Commentary: Weird Things You Did As Children Because You Liked That Book So Much:

The Lion, The Witch And The Homo Award to Mira: “The real reason some of us never come out of the closet: we’re looking for the exit on the other side.”

The Leaf Me Alone Award to Jana:

On News of The World: Foreign Policy And the Last Presidential Debate:

The Cavalry Award to Emily and fynnie:

On Damnit France Why Can’t You Be More Like The Netherlands? :

The Elastane In Your Membrane Award to TheBunnyGeek: and Kate W 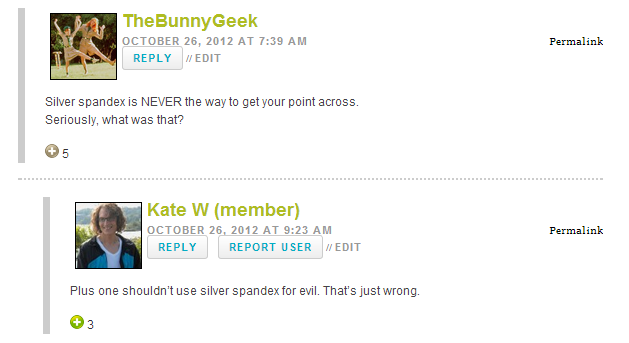 Join A+!
Related:commenthey did you see that comment friday