Last night we got what may be the last opportunity to have the Presidential candidates make intense eye contact with us through a television screen while leaving us with inspiring words about their vision for the future – at least, the last one before election night. This last debate was on foreign policy, something which most Americans feel a little unfamiliar on, and which it seems like Mitt Romney does too. 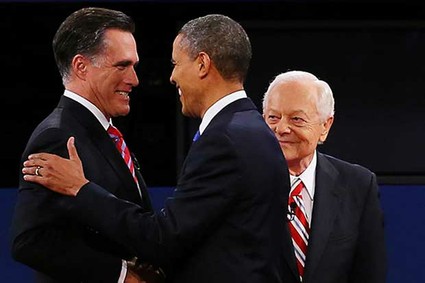 There were a few things going on with this debate – it was an opportunity to talk about America’s relationship with the rest of the world, not to mention our deep-seated national anxiety around the Middle East, but also the last debate, where candidates had their final opportunity to leave voters with a specific impression. The big issues in the room were Libya and Iran — Libya, because of the controversy over whether intelligence about violence in Libya was handled properly, and Iran, because the threat of professional extremist Ahmadinejad gaining access to nuclear weapons is the new Cold War — and while those issues may not have been resolved to viewers’ satisfaction, we did have an opportunity to learn a lot about what the individual candidates believe about the world and America’s relationship to it. Also, the debate happens to have occurred on the anniversary of JFK’s declaration of the Cuban missile crisis, which really set the stage as far as alarmism about security threats and unearned references to Massachusetts (shoutout Kevin Costner in Thirteen Days).

In terms of the discussion over Libya, there’s been criticism of Obama and his administration by the GOP because they claim that he mishandled intelligence that could have prevented the September 11th attacks on the American consulate in Benghazi, which left four Americans dead. (For a good primer on the longer-term situation in Libya, this is a good read.) Romney also claims that Obama didn’t respond appropriately immediately after the attack, expressing sorrow for the loss or labeling it as a terrorist act. There’s also theorizing on the GOP’s part that the Obama administration’s handling of violence in Libya and the unseating of Moammar Qaddafi allowed for increased terrorist and/or extremist penetration into the region (an incoherent explanation of this via Rush Limbaugh can be read here). Many expected Romney to heavily criticize Obama’s Libya stance during this debate. But in fact, not much was said about it; TIME speculates that this is because Romney may have “come to realize that determining who is to blame in Benghazi is extremely tricky at this stage, and that seizing on a still-opaque situation can be politically hazardous. New details are emerging almost daily, shifting the world’s understanding of what happened that night and what the current situation is on the ground.” It seems as though Romney gave up the opportunity to try to pin Obama with the blame for an oversimplified version of events, because it wasn’t worth taking the chance that he would be forced to acknowledge the real and non-simple reality of the situation.

The fear of Iran gaining nuclear weaponry has been a specter looming in American foreign policy for a while now. Ahmadinejad claims that Iran is working with nuclear materials for peaceful purposes, and America on the whole doesn’t believe him. Their proximity to and strained relationship with Israel, America’s ally, is also cause for concern. As important and contentious as these issues may be, however, there wasn’t really much disagreement on them. Obama and Romney are both on the same page that “crippling sanctions” are necessary to discourage Iran, and that military action should be a last resort, although Iran’s gaining nuclear power would be each of their “red line.” They also both agree that their support of and relationship to Israel is of great importance. Essentially, this issue boiled down to bickering about who did it first and who did it better – who supported the idea of sanctions before who, and who is Israel’s absolute bestest friend ever. Probably the high point of this part of the discussion was when Romney was asked how he would respond as President if Israel announced military action against Iran, and was unable to respond to it other than a blustery insistence that that would never happen, because he and Israel would be so close that they would obviously have been involved in those plans together. Sure, Romney. Uh huh. 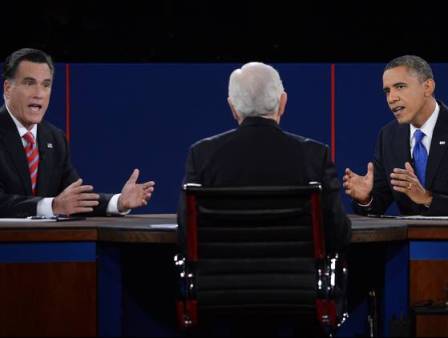 In large part, though, more than individual issues, this debate showcased how each candidate would approach the fact that America is only one citizen of the globe, and has to interact with many other nations and governments. Romney made a point of what he called Obama’s “apology tour,” in which Obama visited a number of Middle Eastern nations and delivered speeches on their relationship with America. Romney accused Obama of “apologizing” for America’s actions and demonstrating “weakness,” which he connected to compromising American security. Aside from my previously expressed feelings about how sad and damaging it is to frame decisions in terms of “strength” and “weakness,” the fact is that Obama’s speeches in the Middle East weren’t particularly different from the statements of past presidents. Obama mostly spoke about legitimately awful things that the US is responsible for, like “the destruction of Korans in Afghanistan, and abuse of prisoners in Iraq.” Anyone who thinks those aren’t things we very much deserve to apologize for is a horrifying candidate for President, because they clearly think that by virtue of being American and perhaps by being “a Christian nation,” anything we do is justified and above reproach, regardless of who it hurts. Some of the other things Romney has claimed Obama has “apologized” for are as follows, according to fact-checkers:

“The United States certainly shares blame” for the global banking meltdown, Obama told the French. The George W. Bush administration had “lowered our standing in the world,” he told the English. And to the Turkish parliament, he said: “The United States is still working through some of our own darker periods in our history,” which included slavery, segregation and treatment of American Indians.”

A president who acknowledges that we are still “working through… our own darker periods” is better for America, and also perhaps better suited to recognize and respond to inequality and marginalization abroad. Which brings us to Romney’s disturbing rhetoric about promoting “a civil society” and “teaching” the people of the Middle East to turn away from extremism. A reading of the situation in the Middle East, extremism included, that doesn’t think any reaching out on the part of the US is necessary but does think that we just need to train its citizens to behave better is a colonialist and utterly backwards point of view, and also frankly embarrassing. Combined with the fact that Romney literally verbatim said that our strategy should be to “get the bad guys,” it seems clear that he’s a candidate whose approach to foreign policy takes more inspiration from Rambo than it does from any kind of understanding of international relations.

Ultimately, much of the discussion about foreign policy (at least the parts that weren’t derailed into Romney talking about jobs again, as if there weren’t already perfectly good jobs supercuts of him) was actually about military policy, and how issues abroad impact American security. It would have been nice if there had been more discussion of America’s responsibility to other nations — for instance, how Romney and Ryan’s anti-choice and anti-woman policies would affect the health and safety of women abroad who rely on American aid and support, and could mean a re-institution of the global gag rule. To the extent that anyone brought up these kind of concerns, it was Obama, who thankfully made some excellent points about women’s access to education around the world. All in all, Obama’s understanding of what “foreign policy” means seemed to encompass an understanding of working towards global peace and prosperity, whereas Romney’s focus seemed to be very much on what our world could do for our country, not what our country could do for our world. And while criticisms of President Obama’s complicity in drone attacks and the continued operation of Guantanamo Bay are very much valid, it’s worth remembering that Romney very much approves of those same policies (and explicitly confirmed that in this debate), and also has a view of foreign relations which figures the entire rest of the world as merely the context in which the superpower of America exists. Obama at least seems to understand that we have to be invested in the fate of the whole human race because we belong to it, and that we aren’t just invested in the fate of other places because they might in some way impact us.