To the untrained ear, it might seem as though Mitt Romney is, in these final weeks before the election, making some last ditch efforts to board the women’s rights train. And to be sure, he’s made some semantic strides. From not really mentioning women’s rights at all to talking about binders full of women (which were forced into his hands, did you hear about that?) to Monday’s debate in which he employed  female pronouns as “rhetorical pawns,” someone seems to have given Mitt the memo that women do cast votes/have political importance.  In the foreign policy debate, Romney actually said things like “gender equality” and “women in public life,” phrases that he may have learned specifically for last night’s debate. But it’s important to remember that for all his pandering to female-identified voters, a Romney/Ryan administration would disastrous for women not just in this country, but literally all over the world. 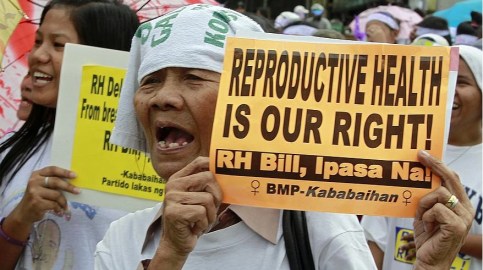 A supporter of reproductive rights in the Philippines

If Romney’s busy busy first day in office goes according to schedule, international women’s rights will be soundly and immediately demolished: as Rachel mentioned in her recap of the debate, a Romney administration could mean a reinstatement of the global gag rule — in fact, he has pledged to do so. The global gag rule, or the “Mexico City Policy” as it’s officially named, bans international women’s health organizations from receiving USAID funding if they mention abortion to their clients, even as simply a word included in sexual health education. As explained on ThinkProgess, “Health clinics are forced to choose between censoring the health programs they have developed to serve women’s needs or being denied the funding they need to keep their doors open at all.”

And since Paul Ryan doesn’t want anyone to have an abortion because he thought a fetus looked like a cute bean, we should all take this threat very seriously. It’s estimated that 40 million abortions will take place in the developing world this year — from which 47 thousand women will die. But the global gag rule would mean more than just a loss of abortion rights: without funding from the US, women’s health clinics would have a hard time providing safer-sex supplies. It’s also bound to lead to an increase in back-alley abortions, and since it would cut off funding to the organizations that would provide care to women suffering from abortion-related complications, the global gag rule directly puts women’s lives at risk.

Additionally, Romney has promised to block the US from contributing to the United Nations Population Fund (a George W. Bush policy that was ended by Obama). The United Nations Population fund “supports programs in some 150 countries to improve poor women’s reproductive health, reduce infant mortality, end the sexual trafficking of women and prevent the spread of H.I.V.” The current federal contribution to the fund reaches 31 million women, and according to the Guttmacher Institute, prevents 22,000 maternal deaths annually. Despite those numbers, Romney justifies his desire to stop giving money to the fund by claiming that it provides support to coerced abortions in China, though a State Department investigation found this idea to be totally false, according to the New York Times.

At the heart of the United Nations Population Fund is the belief that reproductive rights are at the intersection of human rights, gender equality and population dynamics, and a lack of access to reproductive rights marginalizes women and young people — more so for those living in poverty. Likewise, at the heart of Romney’s foreign policy is a global, systematic take down of women’s rights, starting with the poorest and most vulnerable.