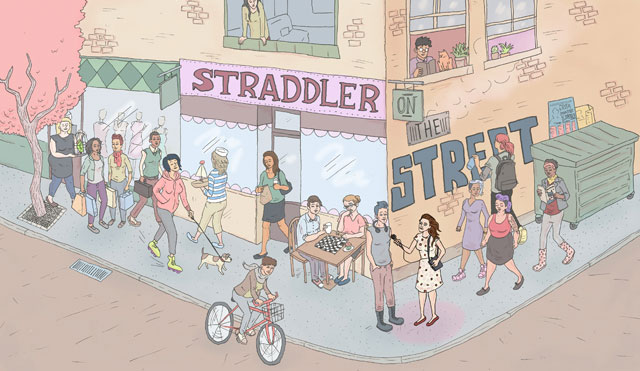 Straddler On The Street: Connie, 24

When Connie got in touch with me about being featured as a Straddler On The Street, she explained that she is 24 and her partner is in her fifties, and said she “really really” wanted to talk about her experience being in “an age gap relationship.” I thought that sounded like something many readers would be very interested in, plus Connie was really nice, so of course I said yes!

Connie and Christi, her girlfriend, have been together for almost two years. They live in New Mexico where they own a house together and have a dog. Connie says another really important part “that makes me how I am” is that she is a first generation Asian American. Her parents immigrated to the United States from Vietnam when they were just a few years younger than she is now. Connie rides motorcycles and bicycles, knits, and is planning to go back to school next semester. We talked about her relationship with Christi, her Asian American identity, and the fact that life often surprises you. 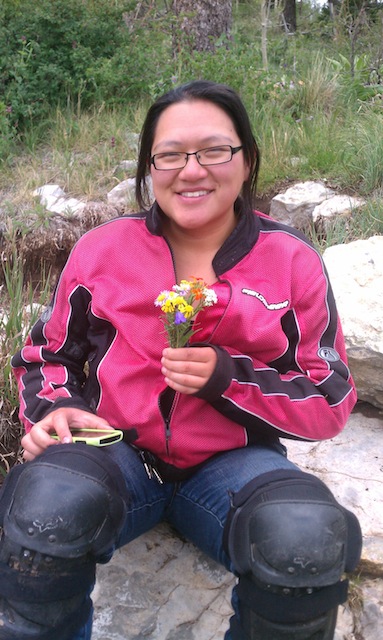 Where do you live, and how do you spend your days?

I live in Albuquerque, New Mexico and work at the university of New Mexico in the anesthesiology department. I also ride my bike to work as much as I can, spend most of my evenings with Christi, and play with my dog. On weekends we sometimes go to various events that have to do with either bicycles, queer stuff, or motorcycles. Sometimes we go hiking and camping.

Have you always lived in New Mexico?

Christi and I moved here in January… we are close to rounding up one year.

Oh neat! Why did you guys move?

We wanted to try something new. Christi is from a farm town in Kansas outside of Kansas City, and I am from the burbs of St. Louis. I had always lived in Missouri, and wanted to just do something new. I didn’t really care where we went too much. Christi did want to go to the Southwest. I knew I wanted to work at a university – I had come from a corporate job and had really hated it – we knew Arizona and Texas were out, so there was New Mexico, and Albuquerque has UNM. I had some experience in the EMR system that UNMH uses, so I thought I could get a job doing that… and I did!

Perfect. How did you and Christi meet?

On a Saturday bike ride in Kansas City, just a couple of days after I moved, actually. Christi worked at a bike shop and had been leading these Saturday rides around the city. The night before I had met one of Christi’s friends at Critical Mass and she told me to do this ride. So I did! Christi was a badass and I wanted to get to know her. We didn’t date until the next year, about 6-7 months after we met, though. 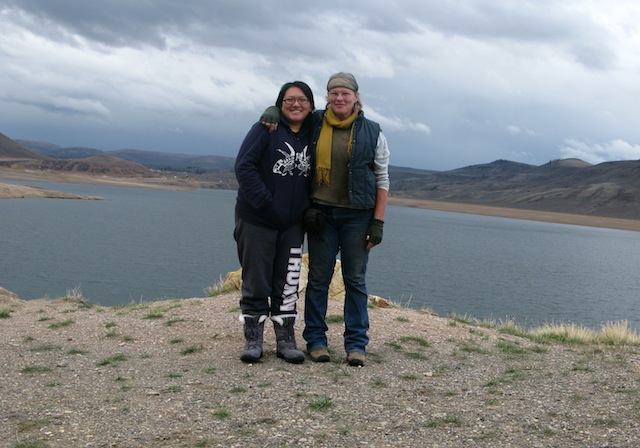 How did you make the jump from just being friends to dating?

Well, we hung out a couple of times as friends… not too many times actually, maybe just 3 or 4 times. Then one day I sent her a text to see if she would want to watch a movie, and if she was a good cuddler! At the point I didn’t really think I was flirting because cuddling to me didn’t seem like flirting territory… I was just having a bad day. Well, she took it as flirting. And kissed me.

Was either of you concerned about the age difference?

We didn’t really discuss our ages until after the first time we had kissed. We both assumed that we were older/younger than we really were. I was concerned about our age difference, but we kept on hanging out and cuddling, even though I wouldn’t let her kiss me after that. It wasn’t until my roommate told me that one of her older coworker’s only regrets was not letting herself fall in love [that] I just let go. Plus Christi was so sweet the whole time and respected my wishes. From the start, I think we both felt a strong connection even if I was resistant to it. Age doesn’t concern Christi, and I wish that it didn’t concern me either, but it is something that I feel vulnerable about periodically, [like] when I am showing someone pictures for the first time. Like they might react badly… like coming out again.

Wow, that is a really interesting analogy. I hadn’t thought of it that way but I can definitely see it being similar. Overall, have you experienced any negative reactions? I am curious what both of your families think, if you are close to your families.

I surprised my family and it took them some time to get used to the idea of me being in a serious relationship with a woman, especially an older woman, who didn’t fit their cultural expectations of what a woman was supposed to be like. Since then it has gotten better, and they have accepted that she is a big part of my life and are slowly starting to be supportive.

That’s good. I’m also curious to know what both your and Christi’s friends think.

Our friends don’t ask much about it. If they do it is out of curiosity, not judgement.

That’s awesome. And have you personally worried at all about the age difference – not so much about other people’s judgements but just any concerns you might have had?

We just fell in love so hard and so fast there wasn’t much thinking involved. I moved in after six months, and was afraid I was living out the lesbian stereotype of u-hauling it, but one of my other friends told me no, she had moved in with someone after 3 months. I don’t think about age too much unless it is a situation where someone is meeting us as a couple for the first time.

Is there anything else you’d like to share with the readers about being in a relationship that has a large age gap?

Not really, it just is what you make of it. We don’t talk about age much, [we just do] day to day stuff. I have adopted the principle of enjoy now because you don’t know what is in the future, which is completely true, but I used to think I could control everything that happened to me. Before I used to be a huge planner, but it is hard to plan for a life together when you have an age gap because that life has not been modeled before. It is about winging it now!

That is really good advice for anyone in any relationship. Thanks for sharing all that! Another thing you mentioned in your Straddler submission is that you are a first generation Asian American. Has that shaped your identity or your life in any specific ways?

I think it has shaped my life in terms of not knowing who I am. I grew up in Missouri where there were not many other Asian people. Cantonese was my first language, but I slowly lost the ability to speak it since I went to a public school and wasn’t required to speak it at home. Being Asian used to be a thing that could be used to make me feel called out. Like when someone asks me what I am, or tries to speak some sort of Asian dialect with me and I have no clue what they are saying. I would say the most lasting effect isn’t directly from being Asian, but growing up with immigrant parents who worked very hard so that we had basic necessities and who instilled in us the importance of school work and knowledge.

I feel like I need to re-explain my first sentence. I basically don’t know what being Asian means, especially since I am so steeped in American culture and don’t feel much connection to my Asian heritage other than my family…which is another reason why their negative reaction to me being gay was so hard. 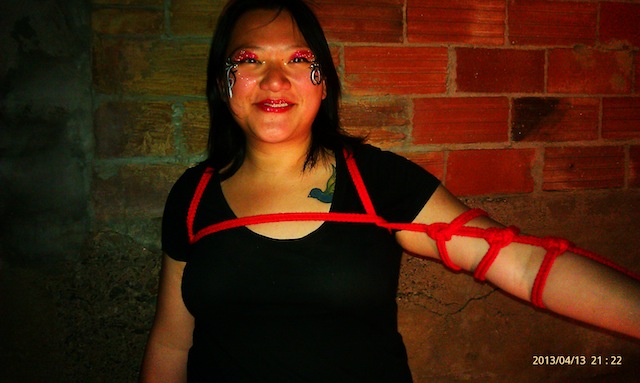 That makes sense (and I think it made sense the first time you explained it, too!). Thank you for sharing all that. Does the idea of what it “means” to be Asian still weigh on you, or are you less worried about that now especially as you have learned to go with the flow more in your relationship?

I am less worried because I don’t know what else I can do that would feel authentic to me right now, but it does feel like something is missing.

Got it. I hope you find that missing thing. In the meanwhile I have a few lighthearted questions. Do you have any celeb crushes?

No I don’t! I knew that was coming since I read some of your other interviews. I don’t usually keep up with pop culture. Although I used to watch SVU a lot and Mariska Hargitay is very hot… someone mentioned their crush on her to me this week and I completely agreed.

Fair enough! That actually stumps a lot of people… maybe I should stop asking it! An easier question, perhaps, is what are some of your favorite books?

Extremely Loud and Incredibly Close. Oskar’s grief and his journey in the book is something I can relate to, and it feels like a big comfy blanket because it makes me feel less like I am the only one who feels depressed… I also really like I <3 Female Orgasm because I am a little bit of an undercover sex nerd. Currently I am reading Brene Brown’s Daring Greatly, and I have a feeling it will become a favorite just because it is so encouraging for living life the way I would like to.

I discovered Autostraddle sometime in college. I remember the first article I read had pictures of a bunch of cats and the captions made me laugh out loud in the computer lab.

Haha, what a great summation of Autostraddle: Cats and Funny Captions. Is there anything else you’d like to share with the Autostraddle community?

Life will surprise you. Also, dating someone older and having older friends means you have more people to introduce to Autostraddle! 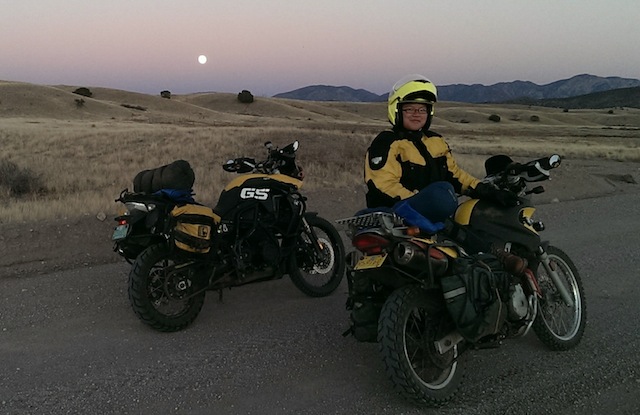 “Life will surprise you.”

Vanessa has written 307 articles for us.