I grew up watching The Simpsons at dinner with my family every night, which explains why it took me a while to figure out just how dysfunctional the real world was.

It helps, though, to know that I was just light years ahead of the rest of the world when I watched The Simpsons. I knew about political corruption, racism, sexism, religious fundamentalism, working-class struggles, and corporate corruption eons before everyone else – it was just fiction is all.

If we lived in Springfield, we’d all be rallying against Mayor Quimby and standing up for the fellow pups in Santa’s Little Helper’s litter at the dog track. We’d be pissed about nuclear waste and shocked by the random acts of kindness that take place in the cynical, yellow-tinged world of the longest-running sitcom in history. Buzzfeed would be buzzing with GIFs of the Krusty Krab telethon and The New York Times would be reporting on Homer’s dumbass shenanigans.

And according to the Tumblr Upworthy Springfield, we’d also all be subjected 24/7 to linkbait about our favorite wide-eyed, over-the-top neighbors instead of slam poets and documentary films from ten years ago. 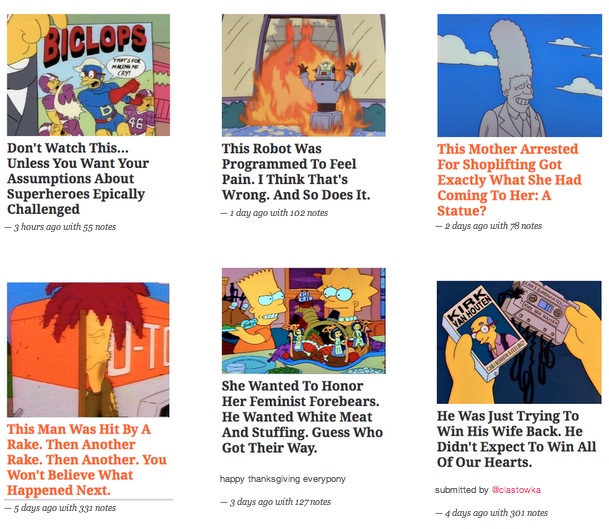 Ugh. Even the Internet is better in Springfield.

All of these would be so amazing to click because instead of feeling like I have to act on an urge to save humanity afterward I could just continue sitting on my couch laughing my ass off.

A bonus? There’s even a newsletter pop-up that never stops making you want to bang your head into your computer screen when you come innocently seeking out a good quote for your nonprofit’s Twitter feed. Only this time, it makes you laugh.