Straddler On The Street: Caro, The Lingerie Lesbian, 23

You may have seen Caro around — she’s The Lingerie Lesbian. She’s also a 23 year old living in New York City and working in PR by day, but who doesn’t have multiple identities in the Age of the Internet? Caro will be contributing to Autostraddle’s super duper spectacular situation that is Underwear Week 2013, so I thought it would be perfect to feature her as this week’s Straddler — that way we can all get to know a bit about her before she dispenses advice about lacy unmentionables!

Caro describes herself as someone with “an unhealthy obsession with cute panties, corsets and garter belts” and based her brand name off the concept of a lipstick lesbian. Her blog explains: “You’ve heard of a lipstick lesbian? Well, I’m a lingerie lesbian and this is a blog to celebrate that.” Want to learn more about this lovely lingerie-lovin’ lady? Your wish is my command. 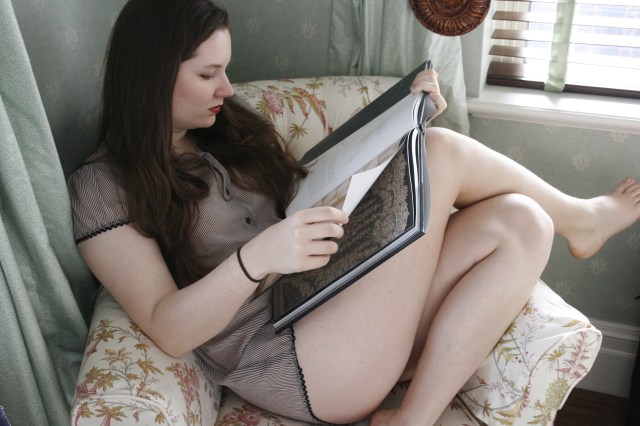 How did you decide to create The Lingerie Lesbian?

I don’t really know why I got into lingerie — there wasn’t really an ‘aha’ moment — but I started my tumblr about two years ago. I wanted somewhere to put all the pretty lingerie images I was seeing. I decided to start my WordPress blog after I graduated from college and wanted to do some more writing from my point of view.

At this point in the project, what does it mean to be The Lingerie Lesbian?

Being “The Lingerie Lesbian” is interesting. It’s definitely a name that makes people sit up and take notice and it means that whenever I enter a conversation online — with a post or on Twitter — I’m announcing a lot about myself, especially because lingerie, and fashion in general honestly, is a pretty heteronormative space.

‪I‬ also feel like there’s a weird thing where men have sort of co-opted lingerie in the lesbian space.

Oh, absolutely. I get a decent amount of message from guys who are like, “I’m sure we relate on a deep level because I think women in lingerie are hot.”

Also, lingerie has a pretty sleazy connotation because you see it most often in porn-like/fantasy situations. The word “see” is key because in general lingerie that is “classy” — and I say that in the way that society as a whole uses the word — is seldom seen because nudity or near nudity is seen as inherently dirty, so women who wear “classy” lingerie would never show or talk about it. Not that I even know what classy really means, but there you go.

‪Ugh right‬, so society has sort of maligned lingerie. You’ll be sharing a lot of lingerie wisdom all week with us, but just briefly from your professional opinion, what are some of the best brands of lingerie?

What are some of your personal favorite brands?

‪B‬rands that I really like for myself are Mimi Holliday, Elle Macpherson Intimates and Fifi Chachnil. Asos and Topshop both have nice collections for more affordable choices.

Do you have a celeb crush? Or a lingerie model crush maybe?

Well, fun fact, I am more into androgynous than femme girls. Trinity from the Matrix was a formative obsession.

I am an embarrassing “Shane made me realize I am gay” kinda gal, so I gotcha.

Well, Trinity was more of a retroactive realization. Missy Peregrym/her character in that gymnastics movie Stick It is definitely on my list.

Oh I have to Google her. I’m actually very bad with celeb culture, every time I ask this question I’m like WAIT HOLD ON WHO IS THAT? In other news, are you a cat person or a dog person?

That’s kind of like choosing a favorite child, but I think I can go with ginger at present. 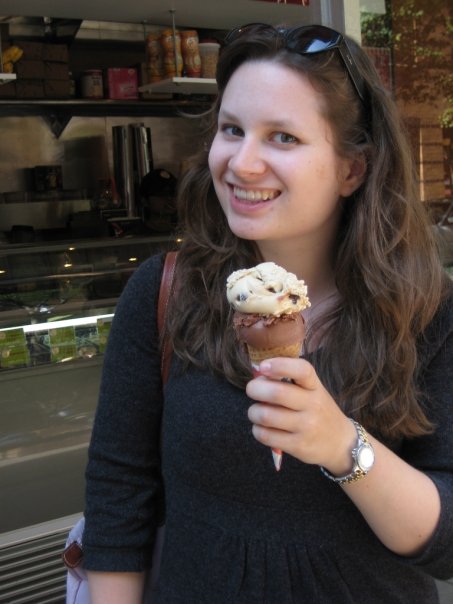 I’m really into the wine bar ABV which is on 97th and Lex right now because the Upper East Side has a dearth of cool/young/delicious places.

What was the last book you read, and what are some of your favorite books? Or favorite writers?

The last book I read was called Wasp-Waisted and it was sent to me for review because it was a mystery novel featuring lingerie. I love mystery novels and I’m a huge from of Dorothy L. Sayers. I also think Edith Wharton is awesome. My favorite poets are probably John Donne and James Wheldon Johnson.

Facebook, definitely. I mean, it’s fun to see my friends’ photos and stuff, but it’s rarely that interesting. Twitter is way better for networking and meeting new people and having interesting conversations.

‪Hm, g‬ood point. Do you ever worry about your PR world and your Lingerie Lesbian world colliding on the internet?

Yes, well, this is exactly an instance in which that is worrying. I mean, it’s not a huge deal, but it’s probably not a perfect situation. I was keeping it really under wraps for a while, but I’m mixing my blog with my “real life” more.

‪W‬hat made you make that decision?

I may at some point decide to move my life professionally more in a related direction [to lingerie] and all the secrecy just wasn’t convenient.

‪Got it.‬ Well be sure to keep us posted about your future endeavors! To conclude: Is there anything else you’d like to share with the Autostraddle community?

Okay, this is just something that I want the world to keep in mind. If you wear a bra size larger than a DD, your boobs are not enormously huge and there are plenty of bra companies that are not Victoria’s Secret that can help you! I know that’s a little random, but I get so many people telling me that their boobs are impossibly humongous and there are no bras that fit them and that’s just not true!

That is great advice! As someone with larger-than-DD boobs I both appreciate the sentiment and also concur! Now I will plug Linda the Bra Lady because she changed my life.

Oh yeah, I’ve heard good things about Linda the Bra Lady. Townshop on the UWS I’ve heard is very good, too. I am small-busted, so I don’t have a lot of personal experience in the “bra size revelation” department.

Ha! Thanks so much for chatting with me and giving us a peek into the life of The Lingerie Lesbian — I can’t wait to read your contributions to Autostraddle Underwear Week!