Learning to feed yourself while stuck in your bedroom can be one of the most terrifying things. Am I about to give myself food poisoning? If I eat this too often will I end up with cooties? How can I get the most nutritional bang for my buck, buck naked? Why does this taste like ass…?

Today on Ode to My Pant(r)y, we’ll learn to navigate a sex store without having a meltdown in aisle three. Give a man a fish and feed him for a day, teach a queer to improvise, and stave off pesky hunger pangs for at least another hour.

Do you ever just sit around your bedroom and think, Gee, I wonder what would happen if I ever got trapped in my room for an extended period of time due to an earthquake/flash flood/frankenstorm–type situation? Would you have the means to survive? Do you still have your handy dandy emergency preparedness kit from elementary school loaded with bottled water and energy bars? Or did you eat all of the foodstuffs when you pilfered the space blanket for a Halloween costume? When it comes to Bedroom-Type Objects That Double As Rations, there’s one offering that comes to mind: edible underwear. But how do they hold up?

You’d think as a blog of lovely lady lickers we’d have someone in our group that has loved and/or used edible undies. Sadly this isn’t the case. Even after polling all of my sex-positive friends, I still came up with no one. The major consensus was that they’re nothing more than a yeast infections waiting to happen. As our resident Sexpert puts it, “I do not put sugar ANYWHERE near my hooha!” With nary an experienced queer around, I had to consult sources I normally wouldn’t. Cough. Cosmo. Cough. But even there the advice wasn’t helpful. Why is no one talking about them? Are we all missing out on something amazing? What if they’re actually fun or tasty? So being both brave and foolhardy and because nothing is more rewarding than ill thought-out research, I decided to give them a taste test (although not a test drive because I value my lady-bit health).

Much like the project management triangle of good, cheap and easy, when it comes to clothing your crotch in confectioneries you have to make some concessions. 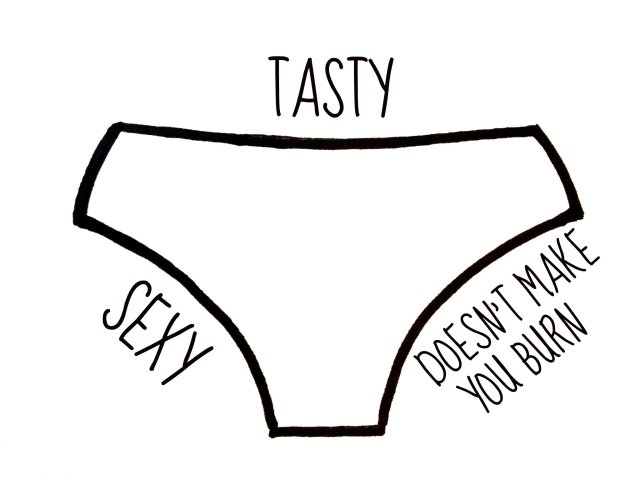 You can only have two (and maybe not even that).

When you stumble into Ye Olde Sex Shoppe, you’ll come across candy pants in shrink-wrapped boxes with outlines of bikini briefs and designations of Unisex or For Him. Unlike candy nipple tassels that tell you exactly what to expect, candy culottes aren’t as clear cut. Unless your mind immediately defaults to your waxer’s disposable paper thong when someone says underwear, they’re taking a lot of liberties by calling them panties. Edible undies are really just a wide strip of fruit-flavoured film with long ties to make them one size fits all. The straps are resilient enough to tie, but that’s about the only selling point. Whoever came up with this positive review saying that they’re “not cheaply made” must have the lowest expectations humanly possible. But then again, they’re buying edible underwear.

Digestible drawers have a plasticky texture more akin to Listerine Pocketpaks than a lunch-box treat. If you expected some raunchy Fruit Rollups, you might end up utterly confused and/or disappointed. Unwrapping the underwear is about as sexy as opening up a new carton of garbage bags. The main ingredient in edible undies is hydroxypropyl methyl cellulose (HPMC), a plant-derived polymer best known for its water absorbing properties. Every time you put up wallpaper or eat a low-fat whipped topping, you’re probably playing with some good ol’ fashioned HPMC. You might become even more familiar with it in the future, since it’s bubble-trapping characteristics might make it the ideal additive for gluten-free bread. Until then, you can swaddle your crotch in HPMC-laden edible undies, with the cold comfort that they don’t contain any sugar or gelatin to mess with your lady-bits.

Take care to store and unwrap your digestible drawers. Much like Mogwais, if you get this shit wet you will instantly regret it. The combination of HPMC and F, D & C Red # 40 make it a colour staining machine! Your kitchen counter? Your mouth? Your hand-crafted quilt from your grandma? All left with tell-tale sticky signs! Even though the package states that these underwear are water-cleanable, don’t be lulled into a false sense of security. Once you’re in the shower you will have to scrub, scratch and scrape at your skin until you are a vibrant shade of your former self. If you used a brush to get it off relatively pain-free, just remember that the Red # 40 will ensure your skin becomes nice and lobstery. If you have plans to meet hir parents, your parents, your boss or anyone that might ask uncomfortable questions regarding a bright red clown mouth, you might want to keep these skivvies stashed until you have a few days to exfoliate away the evidence.

Most importantly though, does it taste good? Oh dear god, NO. If walking into Bath and Body Works makes you woozy, this is a headache in a box. Even though I was expecting artificial flavours, I wasn’t prepared for this chemical intensity. Between the off-putting odor and the burning sensation, I felt like I was licking a scented candle. There is relatively little distinction between the Exotic Fruits and Strawberry flavours, although kudos to their marketing department for pretending one would discern hints of kumquat or lychee in the former. It’s just a dull, cloying sweetness that will take over your mouth, set up shop and refuse to vacate the premises. Sexalicious time won’t be enhanced unless stained bedsheets, fluorescent tongues or that freshly-sandblasted look get you hot. The only intimacy you’ll feel from edible underwear is the knowledge that your friends and significant others love you enough to put them in their mouths for you.

But hey, if quick dissolve edible undies sound like too much of a hassle, there are more options on the sex racks. You can try your hand at more familiar confections that may or may not ruin your childhood. 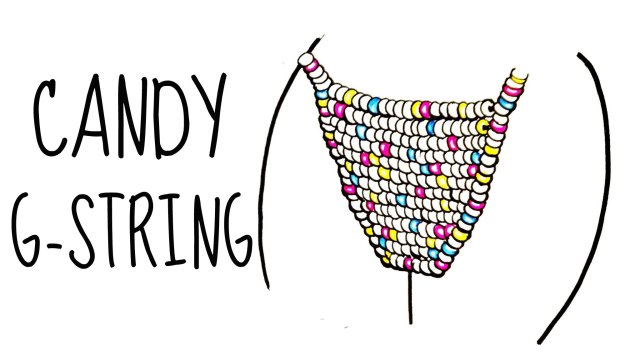 If you’re a fan of candy necklaces, they’ve got your covered. Using the same hard-candy and elastic cord technology that made you the playground’s foodie fashionista, candy g-strings let you cover your lady bits in a slightly more appetizing way. While they don’t necessarily look like underwear, they’re a definite step up from the aforementioned plastic loincloth. According to one account “they’re incredibly resilient to multiple, not-so-delicate chompings.” That’s both a promise and a warning, since you’ll have to really employ your molars to get your way through to dessert. Given your proximity to delicate lady-bits, you might find this disconcerting. If you want something a bit easier on your jaw, you could tarnish your memories of gummy worms and sour keys with gummy underwear instead. I mean, who doesn’t want Gummy Undies with Bold Fruit Flavor? Most styles employ a thick slab of gummy as a loincloth type device, securing the skivvies to your snatch with shoe string additions. Just be wary when it comes to crotch application since they’re both actual candy instead of frankenplastic. If you choose to go ahead with sweetened sexcapades, make sure to add a shower as part of your post coital routine.

Have I somehow not turned you off edible underwear completely? Given the abundance of lackluster lunchable lingerie options from Ye Olde Sex Shoppe, you could go the DIY and make something regretable yourself!

If you’re a cupcake queen. If you have any experience with fondant, you can put those rolling skills to good use. 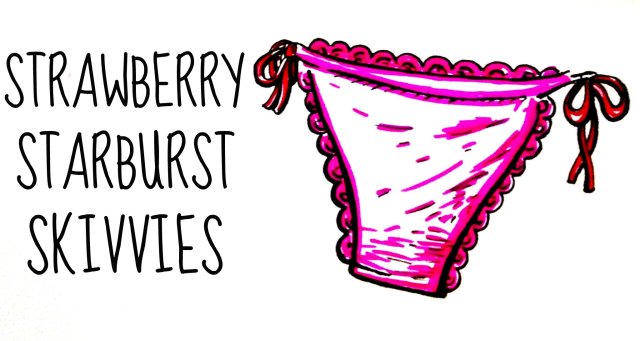 Fully harness Starburst’s malleable nature by flattening a few into a sheet and sandwiching a few licorice laces in for straps. Trace out an underwear-like shape to make your own bonbon bikini bottoms. Better yet, use sugar free fruit chews or sugar-free caramels to slightly minimize your chances of a burning candy crotch. If the idea of a candy g-strings made you blush, just remember that you can stay modest by going full granny panty when you’re designing your drawers. Or at least, as modest as you can be when you’re asking someone to eat off your underwear.

If you’re a knitter. If you have any knitting or crocheting skills, make your own lacy, licorice lingerie. To prevent your lady-bits from burning for the next week, at least try to find sugar-free candy. Other tutorials suggest knitting ramen noodles, but this might leave with you with conflicting dinner time feelings until the end of the semester.

If you’re a carnivore. If Lady Gaga’s meat dress stirred your loins instead of your stomach, I have two words for you:

Using nothing more than a dehydrator, a few pound of ground beef, some Slim Jims, your grandmother’s secret meatloaf spices and rudimentary leather-working skills, you can fashion some savory skivvies.

If this somehow piqued your interest for palatable panties, let me know. Meanwhile I’m going to stick to my good ol’ fashioned boyshorts.