GayCities is “the place where gays and lesbians connect with each other and share what’s great about the cities where they live and travel.” See: 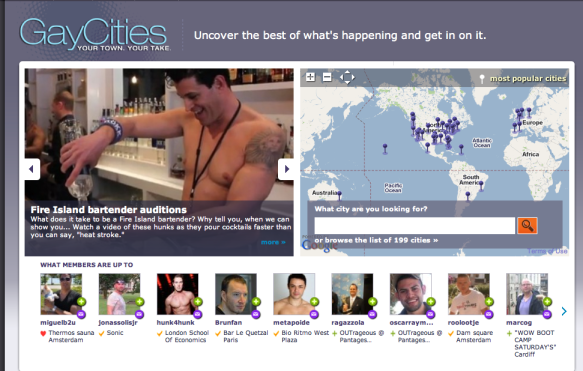 BUT NOW GayCities is “the company that bought Queerty!” If you thought Queerty was dead for good, you were wrong! It’s not dead, it’s alive! But with new writers and a new office and a new owner and a new boss and less “predictable snark.” David Hauslib has written a farewell letter, this is some of it. I’ve highlighted a portion that I’m going to discuss with you later:

There is a reason I decided to launch Queerty back in 2006: I saw a void in queer media, with far too many outlets unwilling to challenge institutions, lawmakers, and positions, which were accepted as truth-tellers and hard, unchangeable facts. But I also wanted to see more stories told about LGBT people, from our heroes to our villains, our teens to our seniors, our celebrities to our everyday gays. Queerty accomplished so much it set out to do, but like the news cycle we covered, its mission is never-ending. There is more work to be done. More posts to be published. More fundamental rights to be secured. More kids to celebrate, and more souls to mourn. More songs to scour. More trash to talk, and more sex to scandalize. More acceptance to be had, and more minds to change. And most of all, more gay, lesbian, bisexual, and transgender people to remind and reassure that we’re all in this together…

For a moment it appeared Queerty would fall to the wayside, after a disagreement in strategy with the site’s contracted operators, who decided to change their business focus. The outpouring of support following that announcement showed just how much Queerty’s readers wanted the site to continue, and how it became an irreplaceable resource for so many.

I trust GayCities to carry on Queerty’s mission, which was always to inform and entertain. And the GayCities team recognizes as much as we did that Queerty is nothing without its readers.

… and the new owners have written a hello letter. Here’s some of it:

Bringing GayCities and Queerty together is for me, as co-founder of this company, a kind of content dream come to life, a rare chance to be both politically provocative and entertaining in a way that few media companies have achieved this side of Comedy Central and Gawker.

While we are committed to maintaining the best of Queerty, we also recognize that you have demanded change. In recent months the Queerty patented wit devolved into predictable snark, eviscerating everyone and everything in its path. Some of the comments simply piled on. We will maintain the independent voice at all cost, going after with a vengeance the powerful, the hypocritical and the just plain foolish. But now we’ll also strive for a better sense of journalistic balance and fairness.

In other words we’re going to keep afflicting the comfortable; only now we’ll take care to comfort the afflicted as well.

We’ve been talking a lot about “sustainable business models” and this, ultimately, is usually the chosen path. You give something up — like nearly your entire staff, it seems, in this case — in exchange for sustainability and security. In the tricky world of online media, that’s a trade-off many other sites are quick to make, because what’s the use of autonomy if you end up not existing at all? 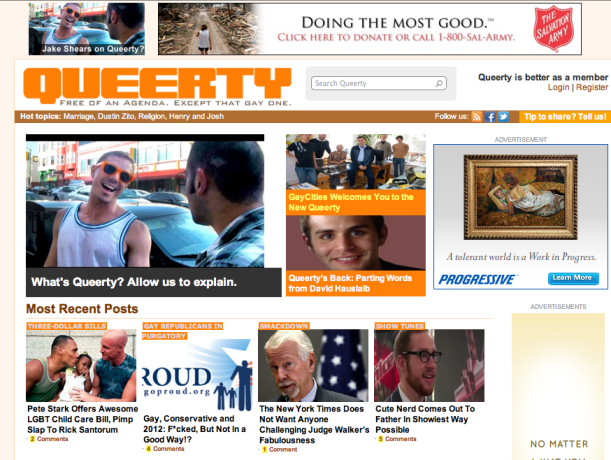 So who is this big Kahuna rescuing Queerty? What is Gaycities, this “number one destination for gay and lesbian travel”? Well, Gaycities, which brings in traffic levels similar to this website, describes itself as “a gay yelp” and its media kit defines its demographic as 84% gay men with 76% of users described as “affluent gay men (no children) with the majority earning over the average annual income.” The travel events listed are either events for all queer people or events for just gay men —

I have to rant for a minute here, if you’ll bear with me. First, a picture of some very nice looking men:

So, I try to stay away from any less-than-positive endorsements of other websites or publications — it’s just too easy, and when people do it to us it hurts my feelings and then I start crying and throwing things and then I ruin my girlfriend’s evening. I’m not gonna say anything negative about the editorial content at either of these sites.

But honestly this is sort of an overarching situation that happens all the time in the whole wide world. Dudes! COME ON. Can you imagine Autostraddle claiming to cover gay male media in our masthead? That would be ridiculous. Can you imagine me waxing poetic about wanting to tell YOUR stories? But because women and trans people are already disenfranchised, we sort of let ourselves get tacked on to everything, from the boards of major LGBTQ activist groups to television channels.

But listen: I subscribe to OUT, I read Queerty frequently, I’ve seen many of your movies and your TV shows, I over-analyze some of your people. We cover stories which include gay men sometimes and you cover stories which include gay women sometimes because those stories are relevant to the entire community — but that doesn’t make us a gay male website. We talk about Adam Lambert like it’s our job when it’s clearly not our job, but that doesn’t make us a gay male website; that makes us a lesbian website who really loves Adam Lambert. The word “gay” is also used to describe lesbians or all homos, so indeed we use it all the time — but the word “lesbian” is never used to describe gay men. Yet YOU use it pretty freely.

We have plenty of gay male readers and we love them (HELLO GAY MALE READERS WE LOVE YOU) but we wouldn’t throw your gender on our masthead and expect to get away with it. You know what kind of site we are, and you’re here because we all like each other anyhow.

At this stage in the game — and this applies to every aspect of queer life — we’re fine with being excluded. Seriously, I am! I get it! The gay female market is as shafted as the gay male market is revered. And I understand that adding the illusion of lesbians to a gay brand ultimately pleases advertisers who, despite not knowing the market very well, abstractly feel that they’d also like to enchant some women to use Orbitz for their traveling needs. Basically: if there was a genuine financial benefit to including us, you WOULD include us, instead of just pretending to.

I don’t need you to pretend that your Boy’s Night is Everyone’s Night — if I like the music, I’m gonna show up and dance, and I’m gonna do it knowing and accepting that I’m a queer girl at your gay dance club. I’m gonna read OUT magazine’s Power 100 as a queer girl reading a list catered towards gay men. You don’t need to claim to “include” me to get me to like your shit — if anything, the quasi-pandering turns me off from gay male stuff I’d otherwise happily enjoy.

I don’t watch Queer as Folk for Mel & Lindsay, I watch it for Bryan Fucking Kinney and Emmet Honeycutt. And I don’t watch Logo because I wanna curl up with my Amy’s Organics Burrito and watch Better Than Chocolate at 2AM, I watch it because Jeffery & Cole Casserole is really fucking funny. I love so much of gay male culture because it’s outsider culture, which I obviously relate to, and because it’s cool. Gay men make stuff I like, like Rickie Vasquez. You made him, I like that.

Our community has had this problem from the get-go: lesbian exclusion from gay activist groups, and the continued exclusion of trans* people from all activist groups. That’s a whole entire article on its own, so I won’t get into how that’s gotten better in many ways and also where it still needs improvement.

But when it comes to media? If you think you can “include” lesbians without even employing one, then that’s just insulting.  And it got really boring to keep whining about this lack of representation or quality, targeted content, so we just started doin’ it for ourselves. It’s hard, but we’re doing it, and we’re proud of it, and it’s different than how you do it, and we like it. Like I talked about last week with how journalists toss the “T” into a study of LGBs when reporting on it: just don’t take credit for something you didn’t do!

On that note, I hope that the one writer who stayed at Queerty was the Julie & Brandy in Your Box Office fan — it’s good to know that you like our shit as much as we hope to like your makeover.