Hi remember when the House (which at this point is synonymous pretty much with “the Republicans in Congress”) tried to cut all funding for Planned Parenthood? That was super cute but ended up not working. At least not then. But if you thought that meant Planned Parenthood – or, you know, women in America – were safe, hoo boy were you wrong! What are those wacky misogynistic politicians up to this week?

Well! They’re expected to pass HR3, which is also known as the “No Taxpayer Funding For Abortion Act,” which tells you pretty much everything you need to know right there because TAXPAYERS ALREADY DO NOT FUND ABORTION. Minor point. What this would actually do is penalize private insurance companies if they cover abortion, which means this bill would be more accurately titled “No Affordable Access To Abortion, Even Though You Yourself Are A Taxpayer And Therefore Entitled To Healthcare Act.” I guess that’s a lot longer though, not as catchy.

“This is definitely breaking new ground for federal funding abortion bans,” Julie Rovner of NPR just said on C-SPAN of HR3. “I have never seen a situation quite this,” professor George Washington University law professor Sara Rosenbaum told the Los Angeles Times of Indiana’s ban. Along with the failed attempt to strip Planned Parenthood of all federal funding, this is yet another new frontier in the abortion wars — which manages to hurt women’s access to medical care more than it’s expected to move the needle on abortion.

To reiterate once again, in case this is unclear: even to the extent that Planned Parenthood is funded by the federal government, zero of those dollars will ever ever go to fund an abortion, as that is illegal. They will instead go to help women PLAN their PARENTHOOD, to treat sexually transmitted diseases, to provide birth control so abortion won’t be necessary, and provide a wide range of basic healthcare treatment for women who have no health insurance and therefore no other option for healthcare. Also, as we’ve mentioned before, they’re often a safer and more accessible option for queer people. When you cut any kind of funding to Planned Parenthood, that’s what you’re cutting funding for – rarely, if ever, abortions. (Although cutting funding 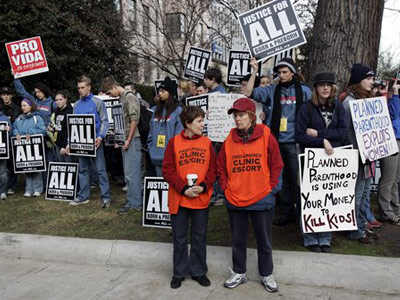 "I'VE NEVER EVEN HAD AN ABORTION, HAVE YOU?" "NOPE! JUST, YOU KNOW, HEALTHCARE!"

And if that wasn’t enough, there’s this: Indiana governor Mitch Daniels has said he will sign a bill denying Medicaid recipients the right to seek ANY care at Planned Parenthood – he’s not even pretending this is just about restricting access to abortion. This is clearly and unabashedly a plan to punish and make an example of any organization that provides abortions, or even care for women and marginalized groups (Medicaid is an insurance option for people whose income falls below a government-mandated poverty line). But really, this isn’t about decreasing abortions, is it? There are 28 Planned Parenthood centers in Indiana, and only 4 of them even offer abortions. And if it was, then there would be much more interest in funding for access to birth control, just for one example.

What Daniels is doing seems pretty clearly illegal, and Medicaid and Planned Parenthood have both indicated that they will look into legal action to protect their patients:

“If the state denies payment to these providers, that would be illegal,” said Mary Kahn, a spokeswoman for the Centers for Medicare and Medicaid Services, the U.S. agency that administers the two huge healthcare programs. “There are some options available to us. But I can’t say what action will be taken to bring the state into compliance. All we can say now is we will review the matter once Indiana decides.”

But this hasn’t stopped many from speculating that other states may follow in Indiana’s example. Oh, and just fyi, there are still ongoing efforts to defund Planned Parenthood in Congress, they just didn’t happen to work in time for the final budget compromise earlier this year. And also moving to Canada isn’t really a viable response, if it ever was. So! Enjoy! And go get that weird itching checked out while you still can.